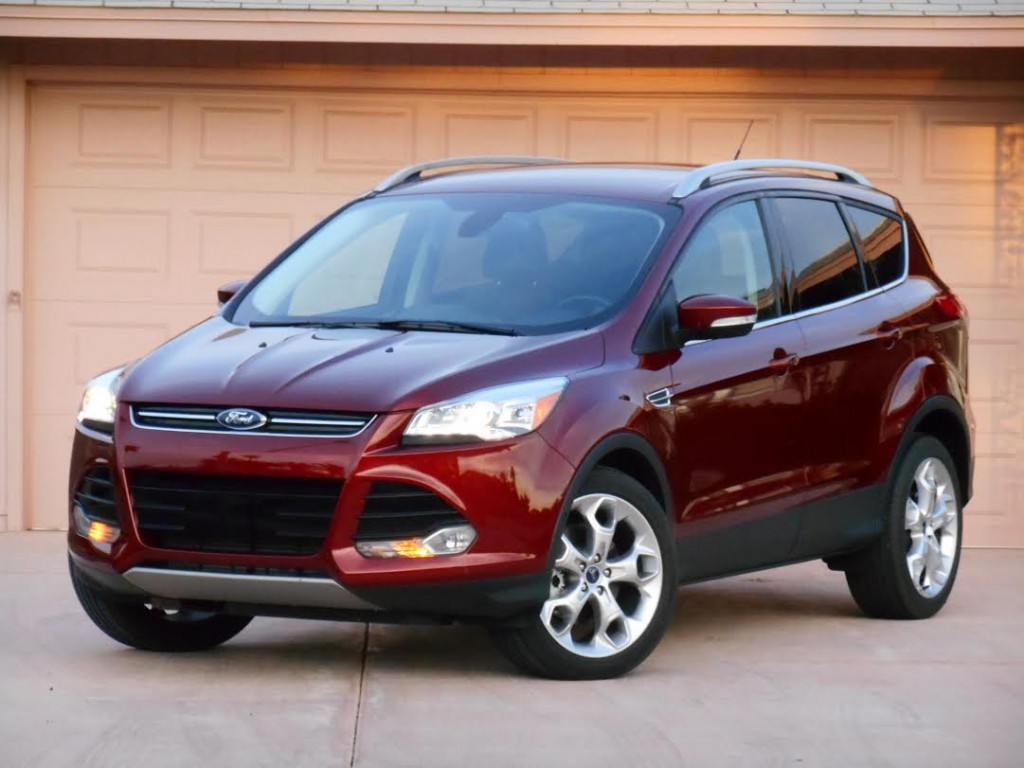 The great: Classy cabin and plenty of power

The not so good: Pricey options, less-than-stellar fuel economy

Escape has long been one of the most popular entries in a very popular class. Last redesigned for 2013, it boasts some rare – if not unique – features among compact SUVs, including a foot-activated tailgate and Active Park Assist, the latter of which can automatically slot the vehicle into a parallel parking spot. Our top-line all-wheel-drive Titanium test vehicle had both features (the first standard, the second in the optional Technology Package), along with the optional 2.0-liter EcoBoost turbocharged engine and a few other items, all contributing to its $35,625 sticker price. 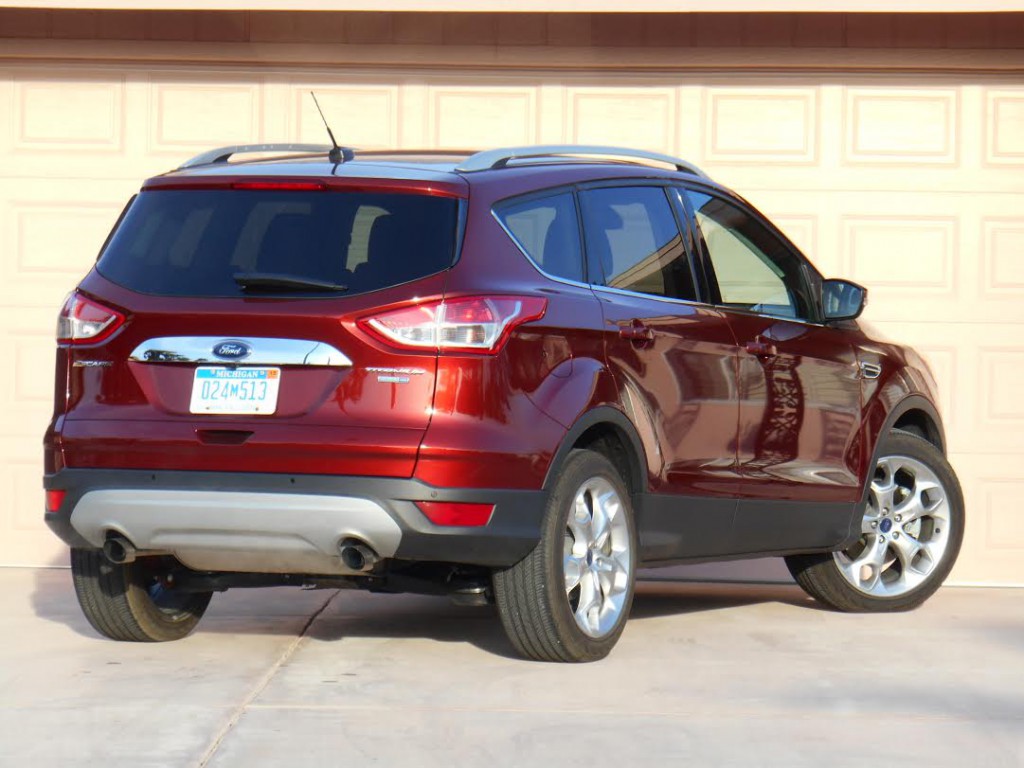 Our test Titanium represents the top of the Escape hierarchy. A base 2015 S model begins at $24,350, including destination charge.

That may sound like a lot for a compact SUV, but this was one Ioaded compact SUV; about the only obvious omission was a sunroof. And some items may not be needed, so a few options could be deleted or a lower trim level selected, which could bring the price down significantly. For instance, for 2015, the base front-drive S starts at about $24,350 including destination, while a mid-line (and probably more popular) all-wheel-drive SE begins at about $28,300. That’s still somewhat above the norm for the class, but that hasn’t kept buyers at bay. 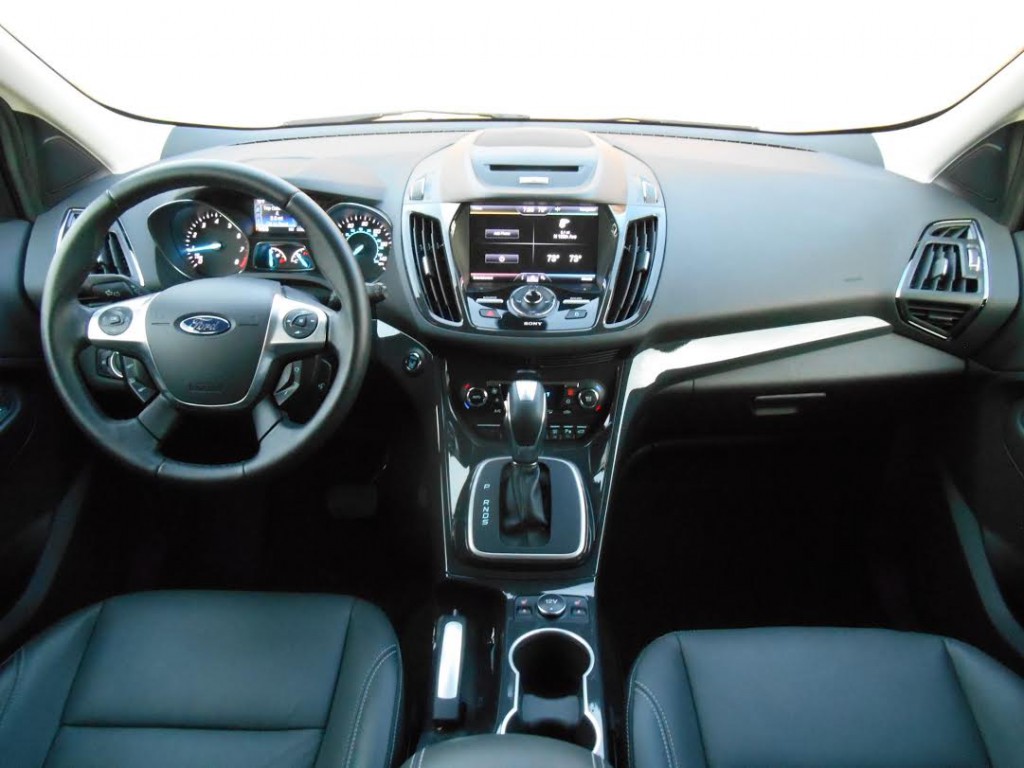 While some compact SUVs used to offer a V6 engine (the Escape among them), those have largely been replaced by turbocharged 4-cylinder engines in recent years. And the Escape offers two. The standard engine in the Titanium is a turbocharged 1.6-liter EcoBoost four rated at 173 horsepower, but as mentioned earlier, our test vehicle had the optional (at $1195) 2.0-liter version with 231 horsepower. (The base engine is a non-turbo 2.5-liter four rated at 168 horsepower.) We’ve generally been impressed with the relatively quick and linear power delivery of Ford’s EcoBoost engines, and this one was no exception. Whether from a stop or from a roll, there was little of the dreaded “turbo lag” (a delay in power delivery) when the throttle was stabbed, and the engine made strong power while emitting only a muted whine. The 6-speed automatic did its part with fairly quick kickdowns. The EPA ratings for this engine are 21 city/28 highway/24 combined. In 322 miles of 80% highway driving, the Escape averaged 24.0 mpg on the recommended regular-grade gas—quite good, but a bit lower than we expected given the ratings.

Our Titanium tester rode well, handling most bumps with ease. But some bumps and pavement swells – particularly if encountered in a turn – induced some odd corner-to-corner rocking motions. Body lean was moderate and the steering felt fine, but few would call the handling “sporty.” 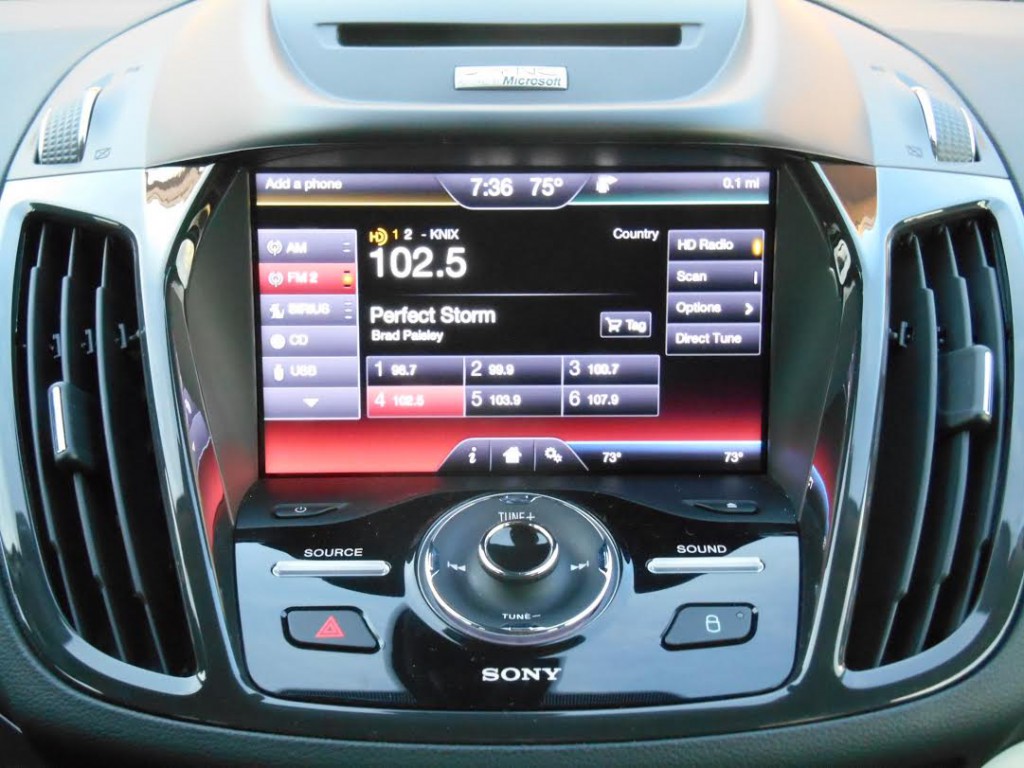 The much criticized MyFord Touch digital interface system has improved over the years. The screen, however, is a bit of a reach from the driver’s seat.

The Titanium’s interior is covered in fine materials for the class, with fairly deep padding on the dash, door tops, and armrests. However, our tester’s cabin was a somber study in black, as even the trim was gloss black (rather than wood or aluminum), with only some silver accents for relief. Still, it looked rich enough to rank as above average among compact SUVs.

As is the compact-SUV norm, there was good adult headroom and legroom front and rear. Access was easy thanks to a low step-in height and—particularly in the rear—large door openings.

Drivers have good visibility thanks to thin front roof pillars and moderate side and rear pillars. At night, cornering lights come on to help illuminate the way in low-speed turns. Our test vehicle came with a rearview camera, which showed an unusually bright image at night. Yet it only displays about a 140-degree arc, not the 180-degree (full half circle) of the best, which allows you to see both ways down a parking-lot aisle when backing out of a space. However, our tester also included cross-traffic alert, which does much the same thing, but sounds an alarm when it senses a vehicle coming down the aisle. This proved its worth when trying to back out of a spot at an extremely busy Post Office (this being less than 3 weeks before Christmas), as it went off four times to alert me of approaching cars that were blocked from view by the vehicles next to me. 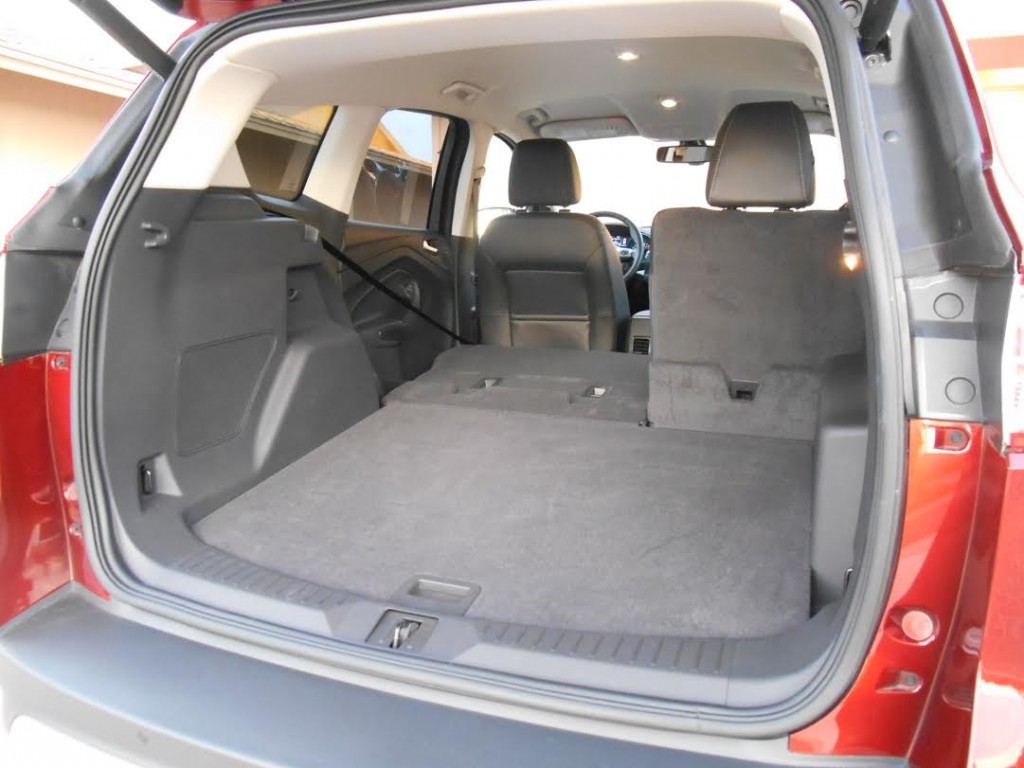 Since its introduction during the 2011 model year, Ford has taken quite a bit of heat over its MyFord Touch infotainment interface. However, improvements have been made in the intervening years, and today’s system seems reasonably workable. In fact, the biggest problem noted had to do with ergonomics rather than logic. The touch screen is a far stretch and deeply recessed behind a horizontal “keyboard-like” panel, so shorter (or even medium-length) fingers may have trouble reaching some of the virtual buttons. Furthermore, many of those “buttons” are wide but not very tall, making them difficult to select when your finger is bouncing up and down as the vehicle traverses even small bumps. There’s an individual power button (rather than just pressing down on the volume knob as usual), and no tuning knob; instead, stations must be found by repeatedly pressing manual tuning or “scan” buttons. You can use steering-wheel buttons to ratchet through preset stations, or you can use voice recognition; the latter worked well enough for me, but takes a long time to execute commands. It was quick and easy to Bluetooth my phone through SYNC, countering an early complaint with the system.

From a “utility” standpoint, the Escape is—overall—fairly impressive. Folding the rear seat backs results in a flat load floor, and there’s a fair amount of underfloor storage. Our tester was equipped with the foot-operated power tailgate; swiping your foot under the rear bumper opens and also closes it. This worked well, and is a great convenience with packages in hand. So that part is all great.

Not quite as great is interior storage. There’s a smallish, deeply recessed 2-tier glovebox, a small but exceptionally deep 2-tier console box (hard to reach stuff at the bottom) with RCA/12-volt/2 USB/SD-card ports, 2 open console cupholders, a shallow dashtop tray (not even sure it’s meant for storage) and small map pockets in the doors. So this part is just “okay,” as most compact SUVs are better in this regard.

During the 2015 model year, the compact SUV class is set to explode—not only in sales, but also in the number of entries. However, most of those being added (which number five at this point) are really subcompact SUVs, meaning they’re smaller than the Escape. Whether they’ll have an impact on Escape sales is uncertain, but either way, Ford’s compact SUV will still be an extremely attractive choice in an ever-more-popular segment.