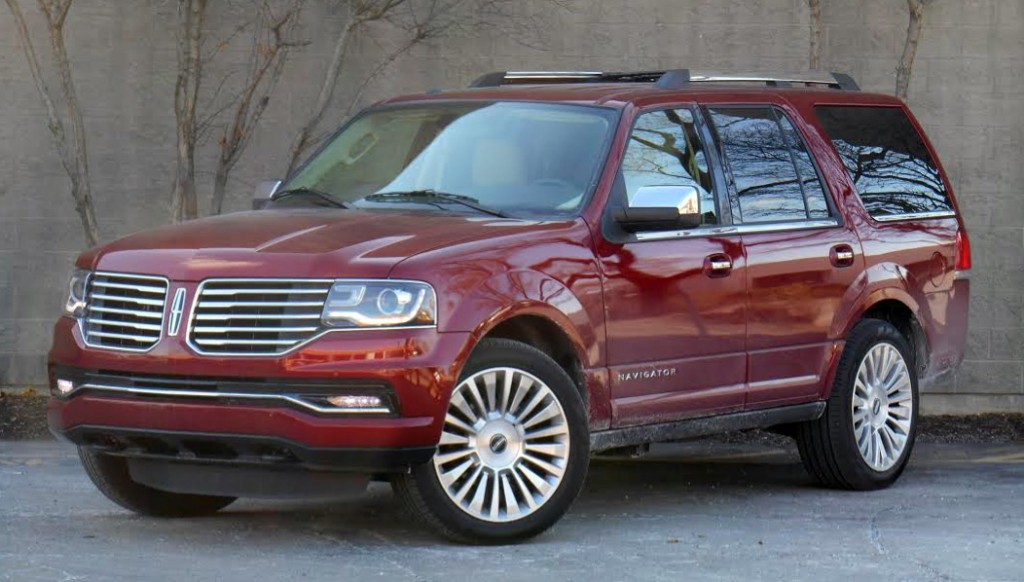 The great: Copious person and parcel space in luxury trappings

The not so good: Still thirsty despite move to EcoBoost V6

Click here for more information on Navigator pricing and availability

New and improved? Let’s consider how that well-worn phrase applies to the 2015 Navigator, Lincoln’s big body-on-frame sport-utility vehicle. It sees touch-ups to its styling inside and out, gains some infotainment and safety features, sports a new highline Reserve trim level, and—perhaps most important of all—trades in its V8 powerplant for a twin-turbocharger V6, ostensibly in pursuit of better fuel mileage. 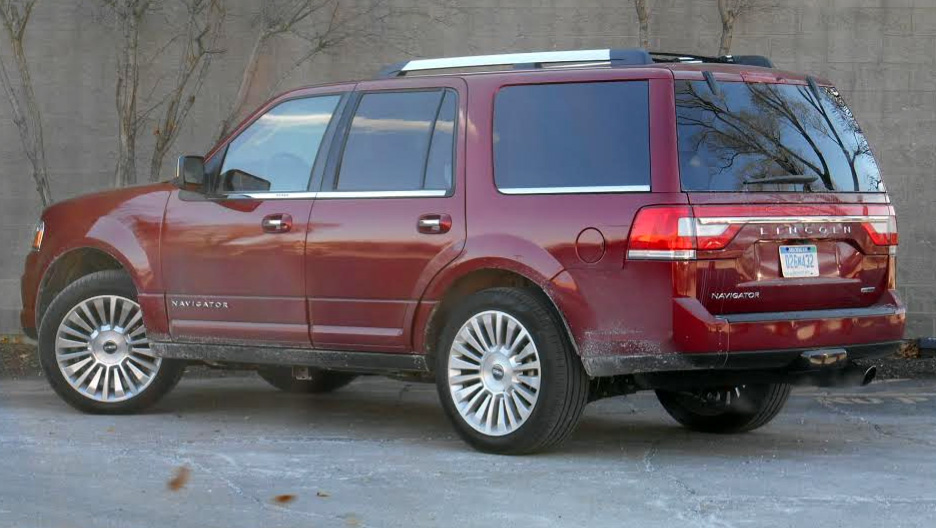 In the large-luxury-SUV segment, where a whole lot of everything is considered to be just enough, the Navigator’s dismissal of 2 cylinders may raise an eyebrow here and there. (We can imagine the “Yes, well, how very interesting . . .” remarks from Cadillac Escalade owners, with their 6.2-liter V8s.) However, even in a big honker like this Lincoln, the twin-turbo 3.5-liter Ecoboost engine delivers V8-like acceleration. It is tuned to deliver 380 horsepower—15 more than the version that powers the related Ford Expedition, and 70 more than the erstwhile 5.4-liter V8 produced. Torque is up substantially, too. As such, the 6000-pound-plus 119-inch-wheelbase 4-wheel-drive job that Consumer Guide® tested was rated at a towing capacity of 8700 pounds. (The rear-wheel-drive model can haul 9000 pounds; 2- and 4-wheel L models with a 12-inch-longer wheelbase and about 200 pounds of added weight can tow less.) 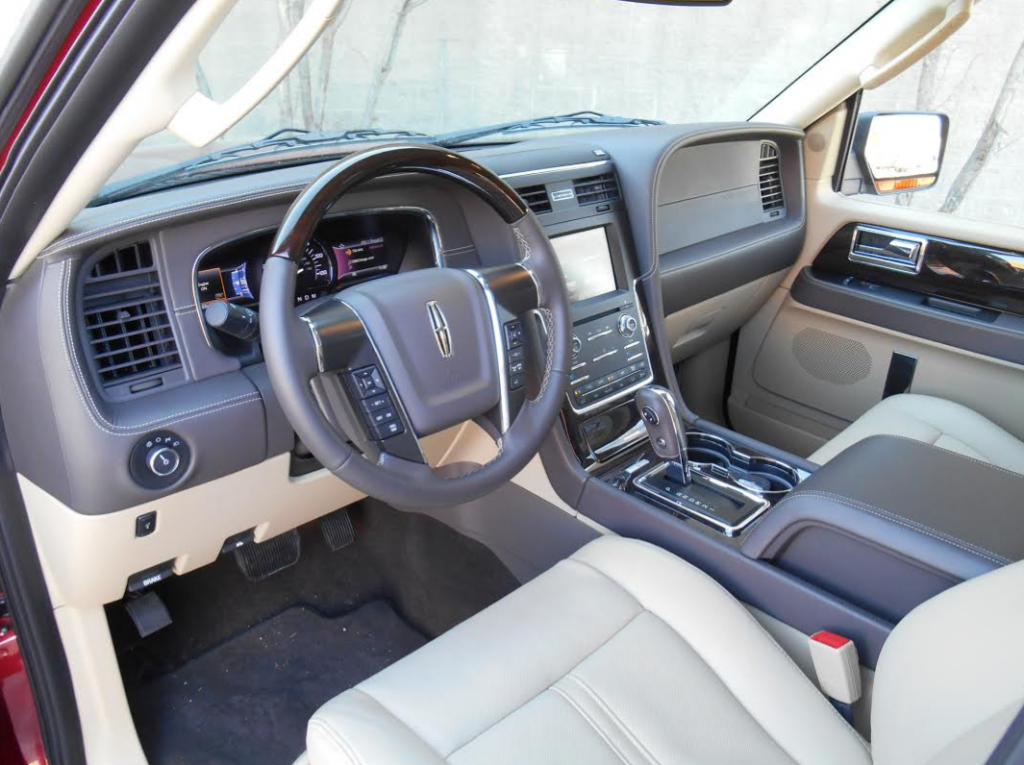 Now, about that fuel-economy business: The “short-wheelbase” 4×4 Navigator is rated by the EPA at 15 mpg city and 20 on the highway. That’s a couple of mpg per category more than what the V8 was listed at for 2014. However, the brawnier Escalade is rated at 14 city/21 highway. Note that the Caddy utilizes an 8-speed automatic transmission while the Lincoln retains a 6-speed autobox. This driver’s experience with the ’15 Navigator, a 93.3-mile stint with 68 percent city-style driving, toted up just 13.03 mpg.

In its other performance areas—ride and handling—the Navigator acquits itself well enough. Body motions are well controlled in what looks like but doesn’t behave like a tall, tippy box of a vehicle, making for a better ride. Bump absorption is good, too. CG’s example came with “Lincoln Drive Control,” a continuously monitored and adjusted damping system with a choice of 3 levels of ride firmness. This tester found the electric power-assisted steering weighted just right to keep from having to wrestle the ’Gator up winding parking-garage ramps and into spaces.

An interview with the 2015 Navigator’s chief engineer Elaine Bannon

The test vehicle was outfitted with the Reserve trim, which adds $6850 to the $65,055 bill for a 4×4 Navigator. As such, it had an attractive brown/light-tan interior, with cushy soft-touch surfaces on the upper half of dash, upper half of doors, and console. Lincoln calls the light-tan hue “Dune,” and it is the color of the premium perforated-leather upholstery found in Reserve models. Ziricote wood inlays adorn doors, console, and part of the steering wheel, an upgrade from the walnut trim found in standard Navigators. (Other Reserve-level equipment includes upgraded floor mats and 22-inch polished-alloy wheels with 285/45R22 all-season tires.) 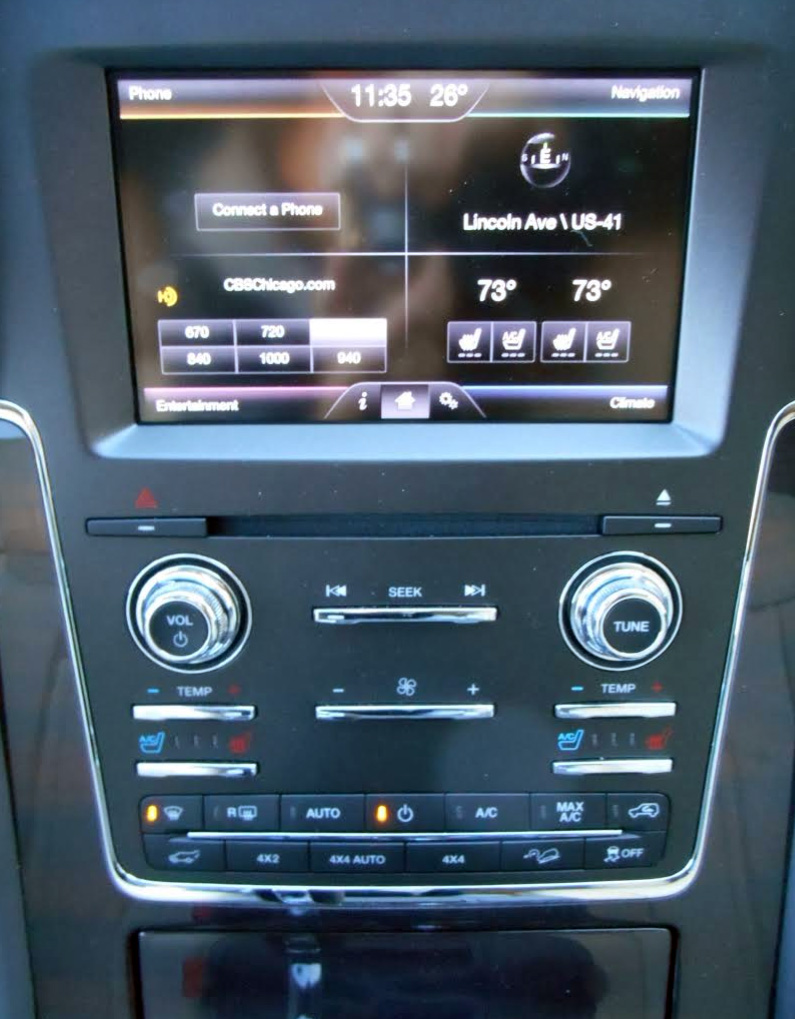 We applaud the inclusion of conventional rotary controls for audio-system volume and tuning.

The bucket seats in the front and middle rows are supportive and cushy. (A 40/20/40 middle-row bench is available, which raises seating capacity to 8.) The 3rd-row seat is a little less plush. Head room is undeniably ample in the front and middle rows. Front leg room is plentiful, and standard adjustable pedals permit drivers to get that much more comfortable behind the wood-and-leather-trimmed wheel—though they might wish for a dead pedal on which to rest a wandering left foot. Stretch-out space is good in the middle row and—surprise here—adult-tolerable in the 3rd row. Some 3-row SUVs and crossovers have low cushions that won’t suit grown-ups, but that is not a problem that plagues the Navigator.

With big windows, visibility is good. Just for good measure, the Navigator comes with a blind-spot detection system, rear cross-traffic alert, and rearview camera. Standard power running boards deploy when parked to assist entry and exit, which otherwise would be a bit of a jump. Inside, even adults can reach the rear seat by passing through the gap between the middle-row captain’s chairs, which can also be flipped up to offer 3rd-row access.

The 60/40-split rear seats fold flat into the cargo floor at the push of a button to create substantial load space. Otherwise, with the seats up, space is limited. Accommodation for personal items consists of an undersized glove box; long but narrow door pockets; a small covered bin forward of the console; two uncovered cup holders to the side of the shifter; and a covered console box with a somewhat obstructing “platform” for media-device plugs, a small net pouch, and a coin-sorting tray. At the back of the console are 2 open cup holders and separate climate and entertainment controls for use by middle-row passengers, who also can use pouches in the backs of the front seats. The 3rd row has cup holders and shallow trays molded into the side panels.

Amazingly (admirably, in one man’s opinion), the presence of the voice-activated MyLincoln Touch infotainment system doesn’t prevent users from manually programming audio presents or summoning detailed climate-system choices on the screen. There’s none of that frustrating tip/tap/twist/toggle foolishness here. Plus, an array of buttons below the screen has controls for the standard dual-zone electronic climate system for those who want to go right to the source—though temperature and fan-speed selections are of the repetitive-push type. 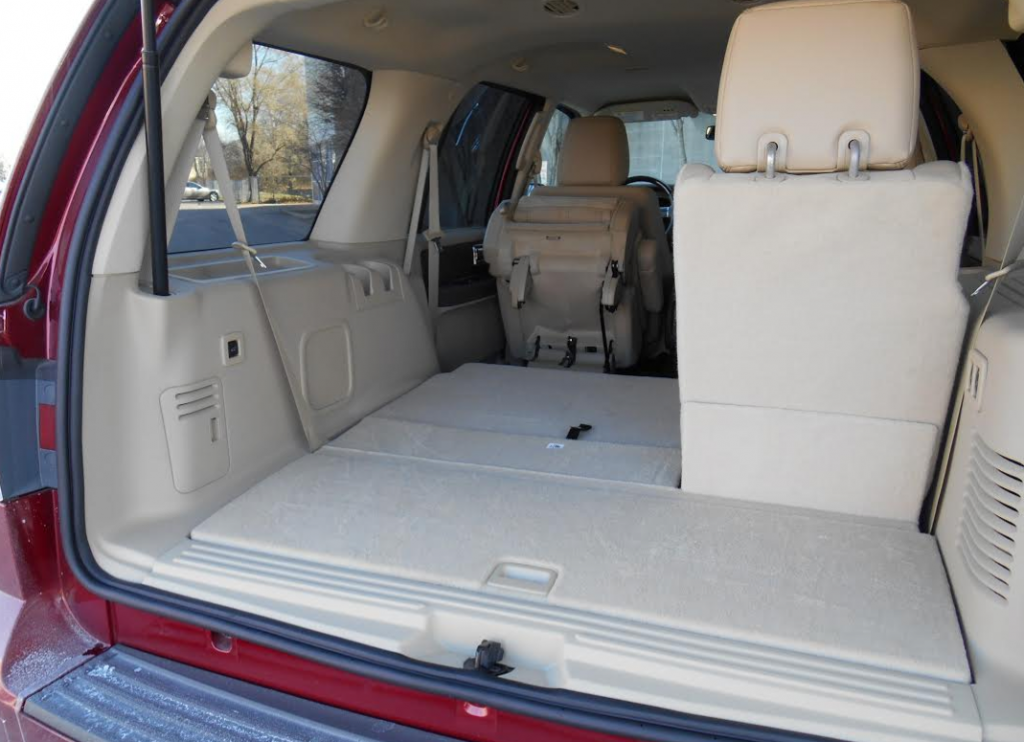 Unlike the Cadillac Escalade’s, Navigator’s 2nd and 3rd row fold completely flush with the load floor, a boon to cargo handling.

Other standard equipment of note includes heated and cooled front seats with 10-way memory settings for the driver, heated middle-row seats, voice-activated navigation system (how could something called the Navigator not have one, right?), THX II audio system, satellite radio, ambient interior lighting, heated power-folding exterior mirrors, rain-sensing windshield wipers, power liftgate, and trailer sway control. The one we drove also came with extra-cost Ruby Red Metallic paint, so with delivery, the final tally was $73,395. That’s just a bit more than the bottom of the price range for the all-new and definitely improved Escalade, which holds down CG’s 2015 “Best Buy” designation for this fairly exclusive class.