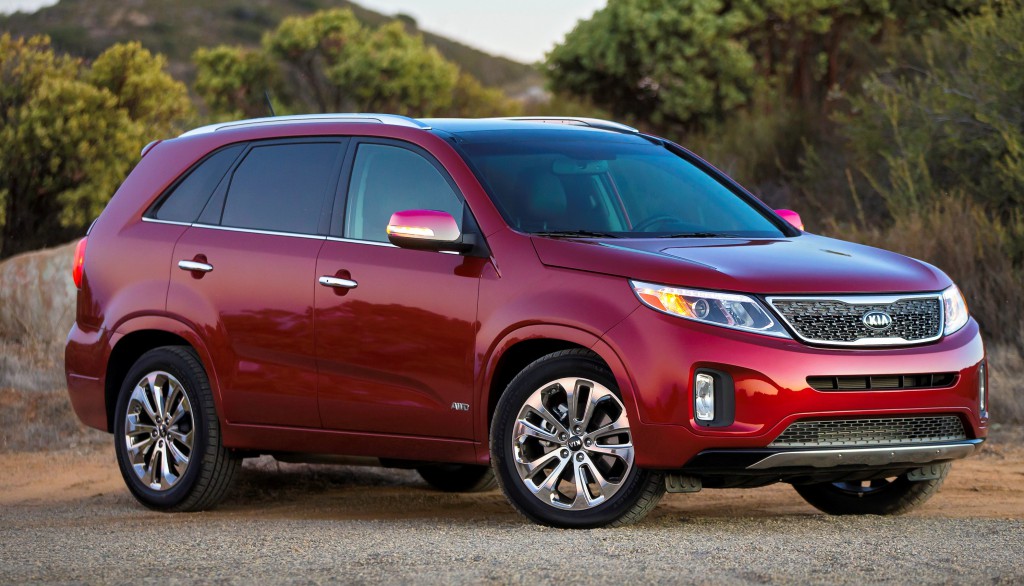 Our test Sorento EX came to $35,550 including the feature-packed Touring Package.

In evaluating vehicles like the Kia Sorento that people buy first and foremost because they’re designed for hauling kids and cargo, it always seems a bit odd to worry about performance. Not that it should—who doesn’t want an SUV or crossover with enough power to operate safely and competently under all conditions? But it is true that vehicles in the Sorento’s class are not designed to set the nerve endings of the lead-footed a-twitch.

Which is why the 3.3-liter V6 engine in the Sorento EX is a nice surprise. What it does is get things moving along with enough easy zip to keep busy owners of this crossover SUV happily on schedule. The responsive new 290-horsepower engine gets away nicely from a stop in city driving, cruises easily on the highway, and delivers fine expressway passing capability with prompt kickdown from the 6-speed automatic transmission. It’s not going to turn the heads of muscle-motor freaks and suddenly lure them into the crossover market, but it ought to satisfy plenty of shoppers whose primary automotive need is one of these car-derived SUVs.

Fuel economy wasn’t quite as impressive in this tester’s experience, however. A 105.5-mile turn (with 69 percent of miles under city conditions) resulted in a middling 16.74 mpg—and that with just the driver and no cargo load aboard.

If there’s one other compromise in the Sorento that might give a buyer in this segment pause it’s second-row legroom. There’s good space all around up front, but the seats behind may be cramped for adults unless row-1 riders are slight of stature and can move forward. Worse yet, rear doors are narrow at the bottom, so entry and exit isn’t easy. All Sorentos can be ordered with a folding third-row seat, but the EX that we tested didn’t include this option. 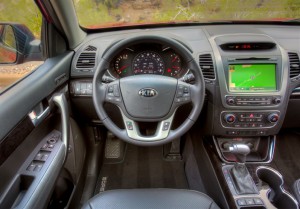 On the other hand, the cargo area is ample behind the second-row seat. For added space, the rear seats fold down with the flip of a seat-side lever (and, in some cases, removal of the headrests). The seats fold almost but not completely flat. At least they aren’t “split-level” when folded; there’s still an unbroken load surface. Interior storage space for personal items is nice, too. There are a couple of small open bins at the front and middle of the console (the front one just below USB and electric ports), two cup holders in the console, a cubby box under the center armrest, a big glovebox, and sizeable in-door map pockets.  Rear-seat occupants can avail themselves of a pull-down center armrest out of which pops two cup holders.

The EX interior has leather upholstery and woodtone detail on the doors, dash, and console for a rich look. Some surfaces are soft-touch, though not necessarily padded. It’s an inviting but not opulent environment. The radio was easy to program, even through the touchscreen that also served the optional navigation system. (The screen is large and its display is clear.) Rotating dials set temperature on the EX’s standard dual-zone climate system; push buttons activate the other heating and cooling settings. Seat-heater buttons are placed a little low on the center stack. Otherwise most everything is within easy reach. Thick pillars to the sides and rear corners hamper visibility somewhat, thought the available rear-view camera helps in that regard.

The all-wheel-drive EX tested rode well on its 235/60R18 tires and handled without challenge, though cornering at 10/10ths is probably not something you’ll want to do in a Sorento. It was impressively quiet, with only a little wind and tire thrum. The engine makes a powerful but well-muted sound under acceleration—just one more thing to like about the powerplant.

This overall pleasing, if occasionally imperfect, package starts at a credible $31,700 as an all-wheel-drive EX with the standard features mentioned above and Hill-start Assist Control, UVO infotainment system and Bluetooth connectivity, push-button starting, and heated outside mirrors with turn-signal indicators among other things. However, our test example was fitted with the Touring Package—at $4000, the costliest option in the book for a Sorento—which brought in blind-spot alert, the nav system with traffic information, heated/ventilated front seats, memory driver seat, a power passenger seat, power sunroof, Infinity sound system, power-folding mirrors, universal garage-door opener, automatic day/night rearview mirror, compass, power liftgate, and chrome roof rails. Need a third-row seat? That’s an additional $1000 in an EX—and it requires purchase of the Touring Package. At that price point, a shopper may find it a little harder to overlook the things the Sorento doesn’t do best.

But, hey, that engine’s still nice.

Read our review of the 2013 Hyundai Santa Fe Limited here