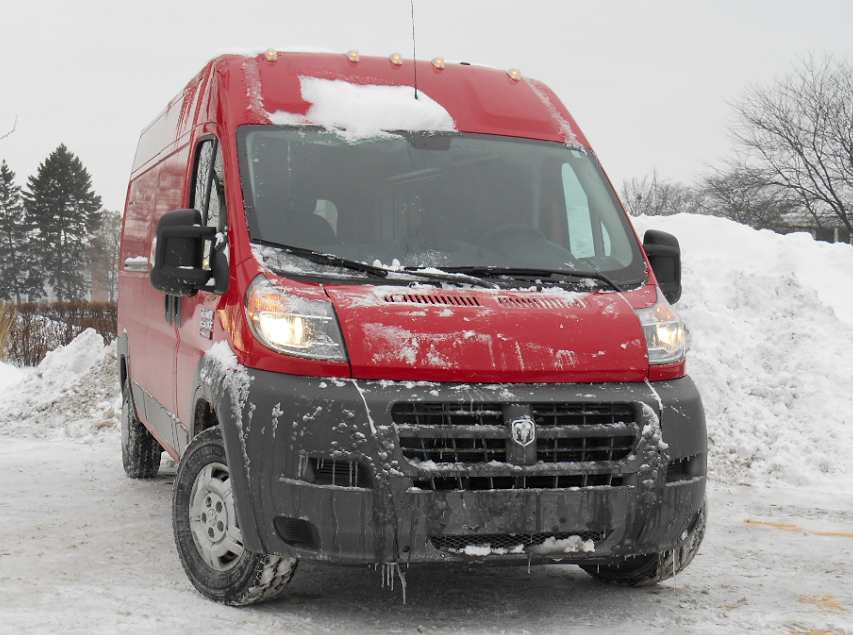 Our Test Ram ProMaster arrived just in time to feel the full brunt of a Chicago winter. As tested, the van above came to $37,175 on the window sticker.

The not so good: Long step up into cab

Most of us likely know by now that Dodge trucks are now Ram trucks, and that the vehicle sold as the Sprinter is no longer with us. Built by Mercedes-Benz, the Sprinter disappeared from (then) Dodge lots when the DaimlerChrysler relationship came to an end.

Since that time Chrysler has entered into a new partnership with—and will soon be completely owned by—Italian automaker Fiat. 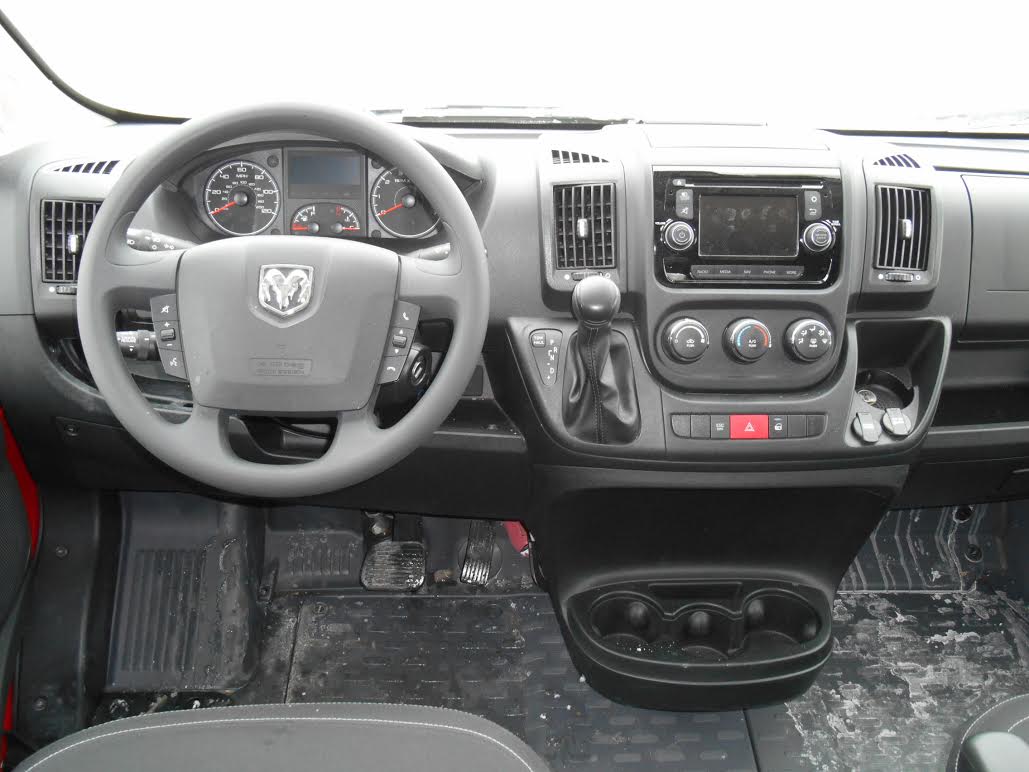 As luck would have it, Fiat builds its own large utility van, the Ducato, a vehicle now being sold stateside as the Ram ProMaster 2500.

As luck would additionally have it, Consumer Guide would spend a week with the new Ram van during some of the worst weather the Chicago area has seen in several years. All the better to get a feel for what the ProMaster can handle, and what it can’t.

I will spare readers what they likely already know. As you’d expect, an empty panel van is a loud thing underway, and a tough thing to heat, as well. That’s the price you pay for hauling around the cubic capacity of your average living room.

Stepping into the ProMaster involves a serious step up, one shorter folks may find to be more effort than they bargained for. Once aboard, however, the ProMaster is a pretty comfy place from which to conduct the business of hauling a lot of stuff around.

The seats are firm and supportive, and the upright, above-the-axle driving position affords drivers outstanding visibility to the front and sides. It takes a moment to adjust to the “wheel in your lap” driving position, but it soon seems normal enough.

Hoarders will find a plethora of places to stow stuff. Count among the cubbies deep door pockets, in-dash recesses, and a useful lower console bin with drink holders. Also, like the Sprinter before it, ProMaster features large, useful storage trays above the driver just over the windshield.

More about the Ram ProMaster

Underway, ProMaster rides better than you’d expect an empty van to ride. Obviously there’s some hop from the unloaded rear axle, but the folks up front enjoy a largely commotion-free ride. Power from the Pentastar 3.6-liter V6 comes on immediately, and feels strong at all speeds. Getting up to merging speeds on short on-ramps requires a heavy stomp on the pedal, but the muscle arrives quickly enough, though with a somewhat ragged roar. Shifts from the automatic transmission are more pronounced than in many passenger vehicles, but aren’t in any way harsh. 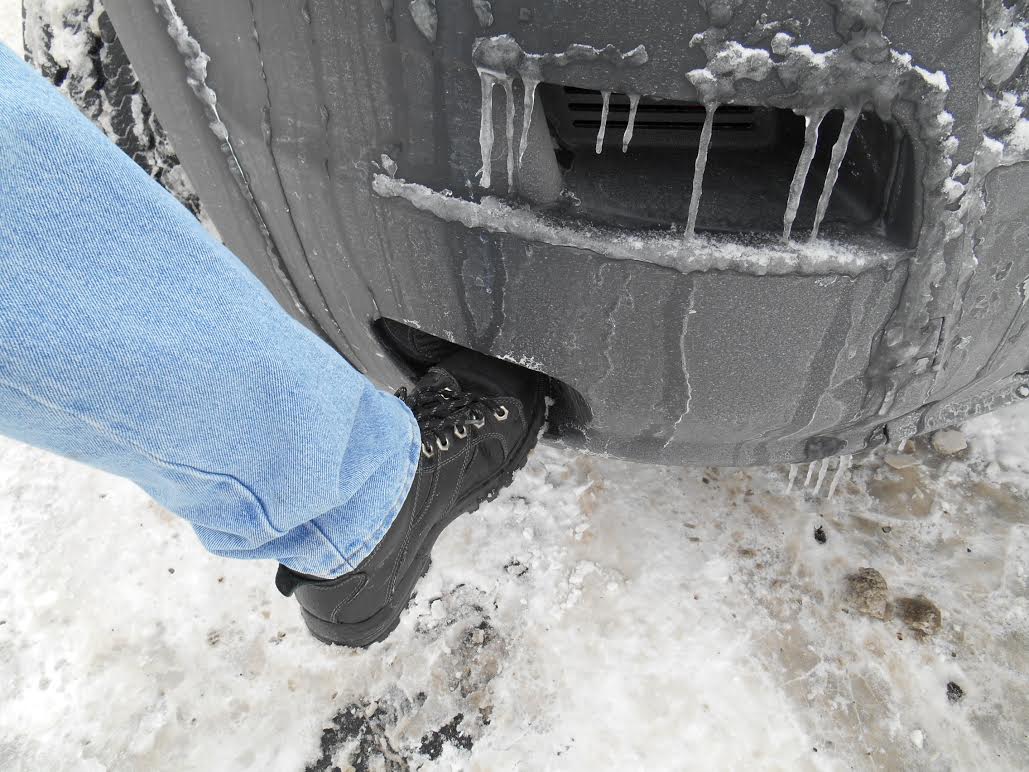 Foot steps built into the ProMaster’s front bumper allow folks intent on cleaning the windshield (or clearing it of ice and snow) easier access to the glass. (Photo and demo foot courtesy of a very cold Rick Cotta)

What may be this vehicle’s most impressive feature is its tight turning radius. Despite its overall size, maneuvering the ProMaster in parking lots and tight alleys is surprisingly easy. Furthermore, the ProMaster’s chiseled front corners help reduce the space required to turn this rig in tight spaces.

As I mentioned above, the weather in Chicago during our ProMaster evaluation was brutal. Both dangerously cold and extra snowy, the environment was ripe for a test vehicle to reveal its otherwise hidden weak points. However, the ProMaster did just the opposite.

Unlike the Sprinter, ProMaster features a front-drive layout. This may in part explain the truck’s impressive maneuverability; it certainly explains its prowess in fresh and deep snow. Traction from a stop, even in 6-inches of fresh snow, was immediate and drama free, and cornering was likewise surefooted, assuming a light amount of throttle was applied while chewing through the radius.

As you would expect of a huge slab-sided unladen box on wheels, strong cross winds can play havoc with you at highway speeds. Additionally, the extreme cold and deep snow took their toll on fuel economy. Our observed consumption came to 12.3 mpg in what we are calling 100% city driving. We would expect to see mileage in excess of 16 mpg in less challenging conditions.

A big van is all about what fits in it, and how easy it is to get that same stuff in and out. To that end, the ProMaster impresses with a usefully low load floor and enormous side-door opening.

Color us impressed. The ProMaster is an elegantly simple and thoughtfully composed workhorse that asks little extra of drivers than might a minivan. We look forward to testing a similar van in more temperate conditions, giving us a chance to report more accurately on fuel economy.

Review Flashback! of the 1973 Dodge Sportsman

Funny note: Despite the sub-zero temperatures, the ProMaster cabin area warmed up fairly quickly. But, with no partition between the cabin and cargo area (as most upfitted vans will likely include), changes in speed or direction resulted in ice-cold air tumbling into the cabin area from the back of the van. Suggestion: If for some reason you’re going to spend time driving a completely empty cargo can in ice cold conditions, bring a scarf. 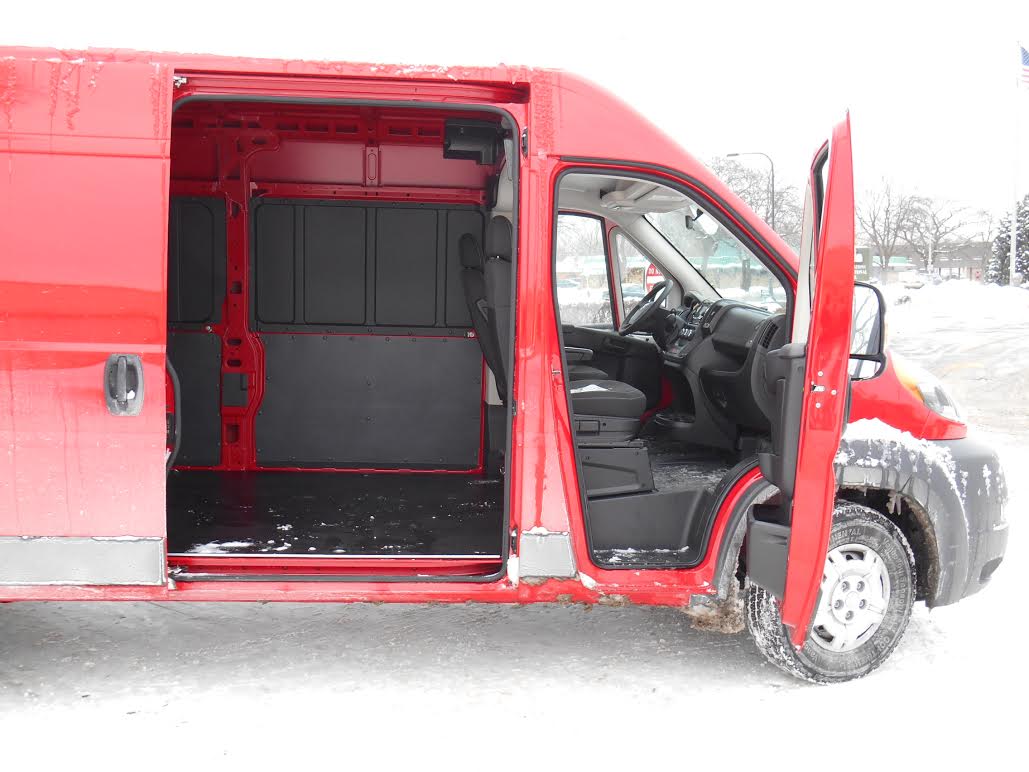 A low floor makes loading cargo easier. The high step-in will flummox those with weak legs.

*Conditions during our evaluation of the Ram ProMaster included travel through deep snow and sub-zero temperatures.