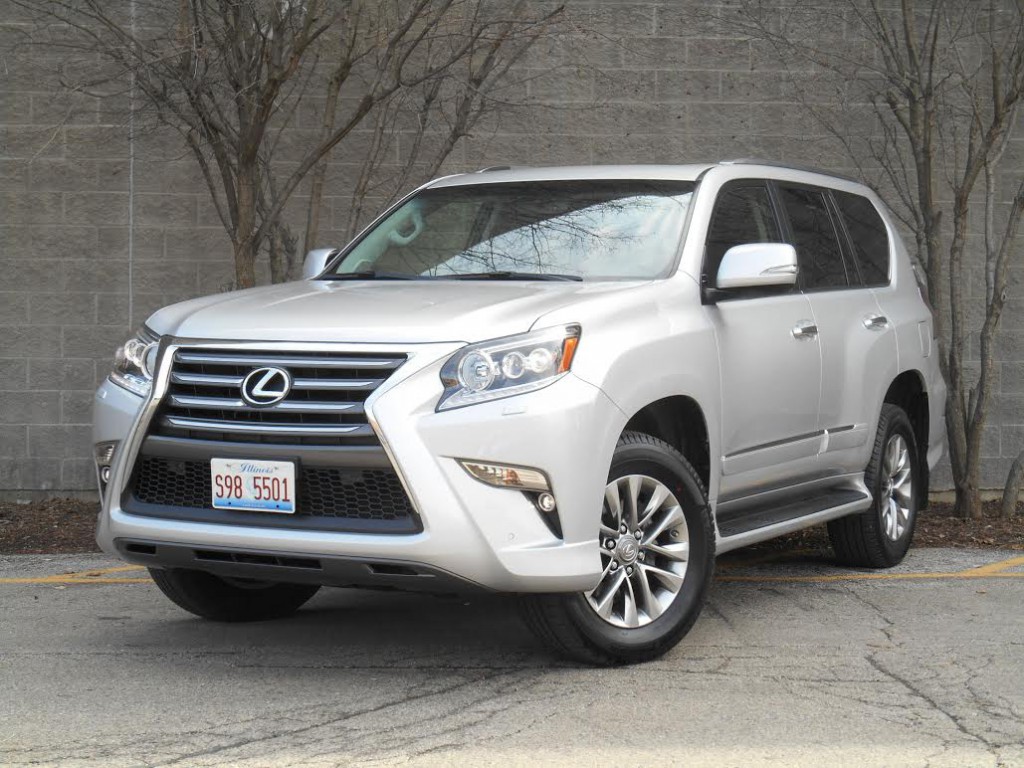 Our test Lexus GX 460 Luxury came to $62,770 on the sticker, including the premium audio system and $910 destination charge.

The not so good: Pants-dirtying entry, poor fuel economy

Recently we had some good things to say about Lexus’ largest sport-utility vehicle, the big body-on-frame, 5.7-liter-V8, $81,000-plus LX 570. That’s not the end of the Lexus SUV story, however. Anyone who thinks he or she needs some of the qualities of the 570 but without all of its cost, bulk, or thirst may find an ally in the midsize Lexus GX 460.

In an era when many of its contemporaries have switched to more carlike crossover platforms, the GX 460 is an outlier with its continued embrace of a truckish separate body and frame. It presses on with V8 power from a 4.6-liter 301-horsepower dohc mill that won’t blow your hair back, but won’t disappoint, either. Meanwhile, the 460 possesses potentially useful features like full-time 4-wheel drive with an electronically locking limited-slip center differential, automatic load leveling, and trailer sway control. 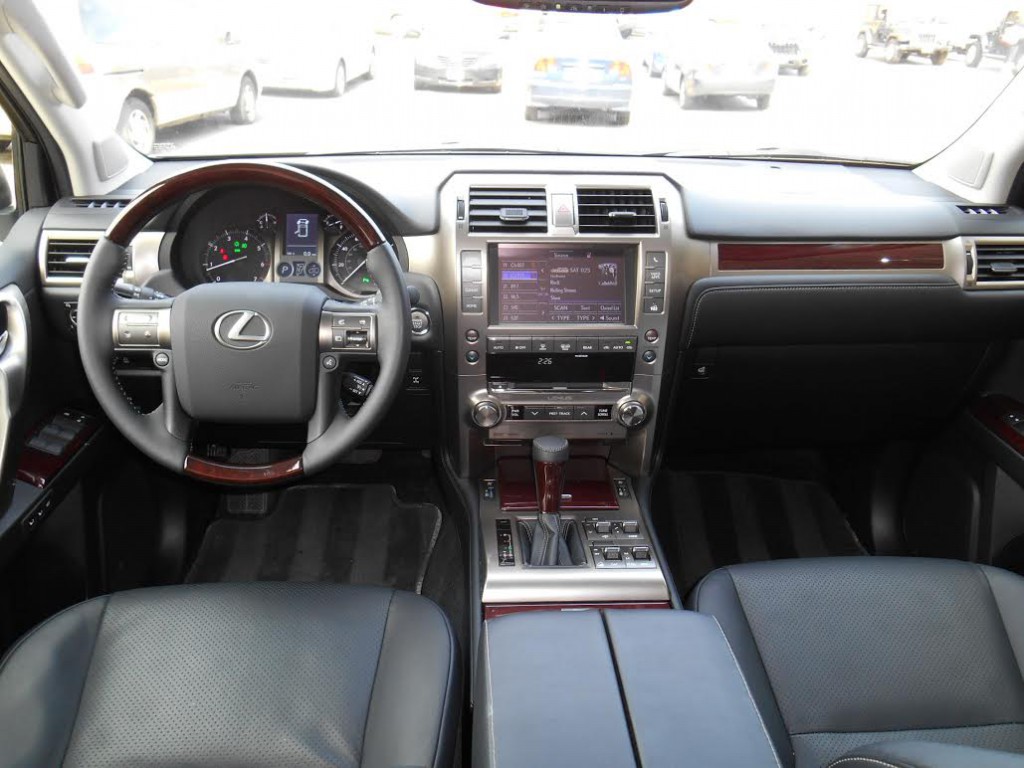 Cabin is mostly lined with quality materials, though bronze-finish plastic on dash is overused and looks a little cheap.

In some ways, the GX seems to be a scaled-down approximation of its big-ticket big brother. Aside from the similarities of their construction, both boast good leg and head room in the first two rows, and fairly unobstructed visibility through tall windows. Step-in is high in either vehicle, and while side steps assist entry, attempting to slip past them on exit will rub the back of your leg; get ready to get dirty. The LX and GX feature comfortable seats, and classy upholstery and treatments of dash and door surfaces. Both vehicles are stuffed with the full complement of Lexus infotainment features (Enform app suite, Bluetooth connectivity, etc.) but without the diverting mouse controller found in the brand’s sedans.

Of course, there are unavoidable differences between the two vehicles.

The GX 460 rides and handles nicely, and is easier to maneuver than the 570 by virtue of its smaller size. Like the big job, the GX has three-setting adjustable shock damping, but in a complete reversal, this driver felt that the 460’s “comfort” setting behaved well enough to be preferred for most driving. Indeed, the “stiffer” settings didn’t seem different enough to improve or ruin the ride experience.

In the smaller GX, three adults sitting comfortably in the 2nd row might be too much to ask on any trip that runs longer than 10 minutes. The flat-topped center driveline hump is slight, but it will force the middle occupant’s knees up.

Where the 570 has a conventional top-hinged tailgate, the 460 sports an odd right-side-hinged tailgate with a backlight that can be opened by itself. The sweep needed to fully open this wide door may limit its use in some spaces. Within, smallish, thinly padded 50/50 3rd-row seats power up or down at the touch of a button. When the seats are folded, a flat load floor forms and creates a good amount of cargo space.

A holdover from other markets the GX is sold in, rear access is via a swing-away rear door than can be a hassle when loading and unloading, especially when pulled to a curb.

Cabin storage space for passengers’ stuff is differently configured and perhaps not as generous in the 460. The glovebox is big enough to contain the owner’s manual but not much else. There are pockets in all four doors. A deep console-box space with a little “change dish” resides under a padded cover that doubles as an armrest; the cover adjusts fore and aft. Front cup holders and a forward cubby with a power plug and USB port are both covered by wood-trimmed doors.

As expected for a lighter vehicle with a smaller engine, the GX460 gets more out of a gallon of premium fuel, though it’s hardly a miser in the grand scheme of things. When this driver put 61 miles on Consumer Guide®’s test vehicle, 72 percent of which was under city conditions, the 460 averaged 15.42 mpg. That was about 1.5 mpg better than his run in the 570, but still not the kind of news that budget-watching buyers are going to want to hear.

The Lexus GX 460 Luxury model in this test started at $60,715, which includes a distinct 18-inch alloy-wheel design, power folding 3rd-row seats, a heated steering wheel, semianiline seat leather, cargo cover, power-folding auto-dimming exterior mirrors, a blind-spot monitor with rear cross-traffic alert, and headlamp washers that are all either unavailable or offered as options in the base and Premium models. The sole add-on to CG’s tester was an $1145 audio-system upgrade that, with the delivery charge, ran the final tab to $62,770.

It’s always fun to drive a vehicle with a little backstory. North America is the only market in which the GX 460 is sold as a Lexus. In most of Europe, this stout truck is known as the Toyota Land Cruiser LC5, and in Japan and most of Asia as the Land Cruiser Prado. A lower-priced version of the Prado is sold Stateside as the Toyota 4Runner. Both the GX and 4Runner are assembled in Japan. 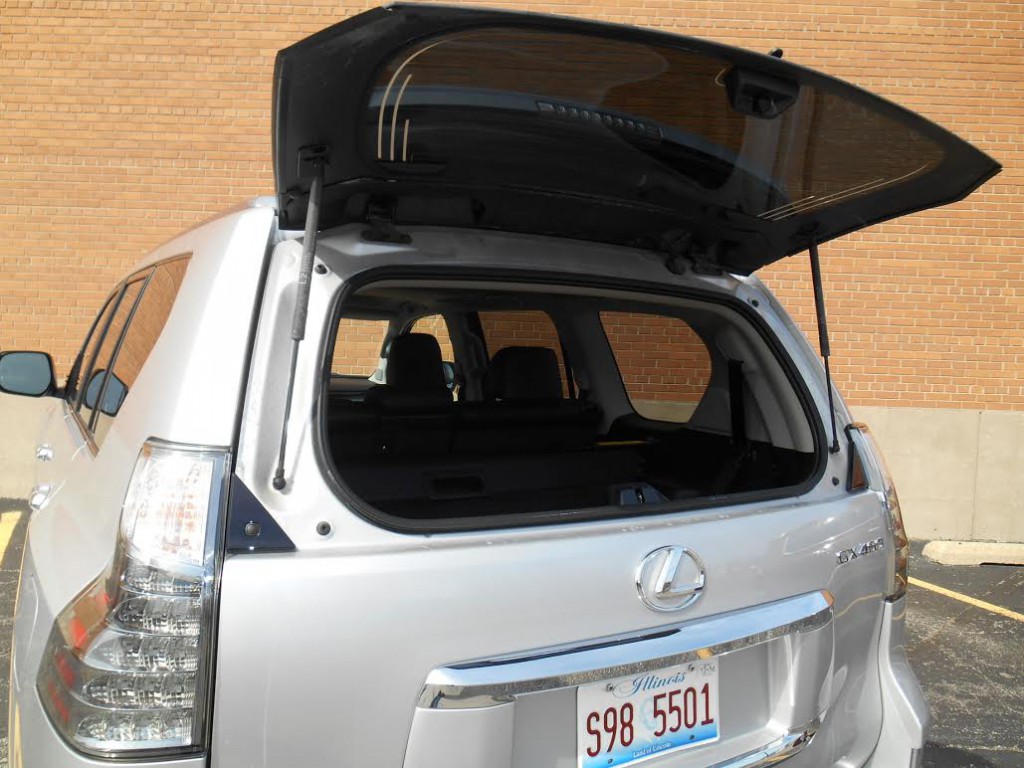 Pop-up rear glass is a handy feature that somewhat offsets the hassle of the side-hinged rear door.

Consumer Guide was fortunate enough to evaluate the GX 460 and the larger LX 570 at the same time. And while I found both to be solid-feeling, powerful, well-crafted machines, I found myself enjoying my time in the GX more.

A traditional SUV, the GX sits high on its body-on-frame architecture, and that leads to body lean, or at least the exaggerated sense of lean. Though pronounced in more rapid cornering, our test truck’s roll in corners was never excessive.

I found that the GX’s quick steering and surprisingly direct brakes contributed to a sporty sensation that seemed a little odd in a vehicle of this heft.

Time commuting left me grateful for the big, lounge-like front seats, and the quiet, well-appointed cabin. I’m not a fan of the smoked aluminum-look plastic that is liberally applied around the dash, but the rest of the interior is nothing but high-end.

I’m still a little surprised that Lexus continues to peddle this truck in the U.S. with the one-piece swing-out rear hatch. Opening the door is pretty much impossible if anyone is parked closely behind you, and walking around the door with large objects is a pain.

Also a bummer is the amount of cargo space remaining when the rear-most seats are up and in use. I expect that most owners will have the tiny 3rd-row seats folded flat most of the time, though.

At almost $63,000, our test truck is pretty expensive, but it is also pretty nice. With lots of ground clearance and some serious off-road hardware, Snow Belters can make a better case for this capable rig than folks in less uncertain climes. If the better handling, less expensive, less thirsty Lexus RX 350 isn’t exclusive enough for you, the GX isn’t a bad way to go. And, rock-solid resale value will help offset the initial price of entry a bit. 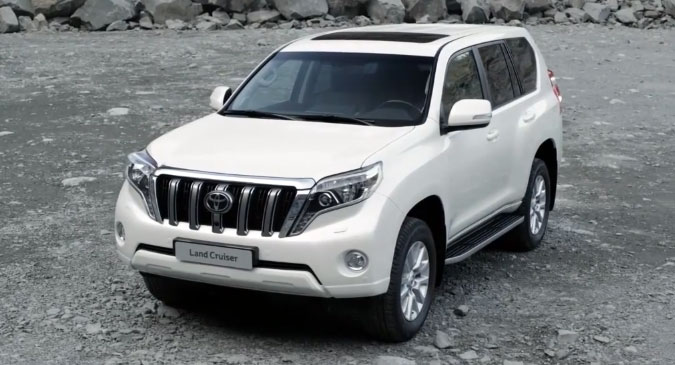 In most markets outside of the U.S., the Lexus GX 460 is known as the Toyota Land Cruiser Prado.