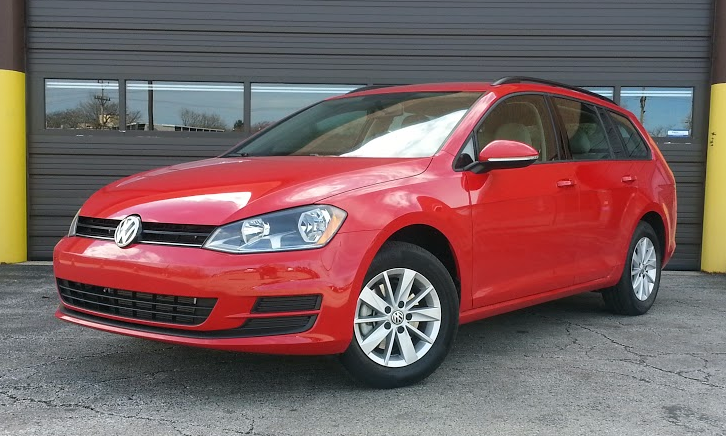 Consumer Guide’s test 2015 Volkswagen Golf SportWagen TSI arrived in base S trim with no options. Including the destination charge, our SportWagen came to $22,215.

The great: Fun to drive, easy on the gas

The Good: Classy cabin, even in base trim

The not so good: No USB charge port

So many of the test vehicles made available to Consumer Guide® editors arrive so well loaded up with all the latest and greatest stuff their manufacturers can pack atop 4 wheels that it can be a refreshing change of pace to drive something like the Volkswagen Golf SportWagen that came our way recently. 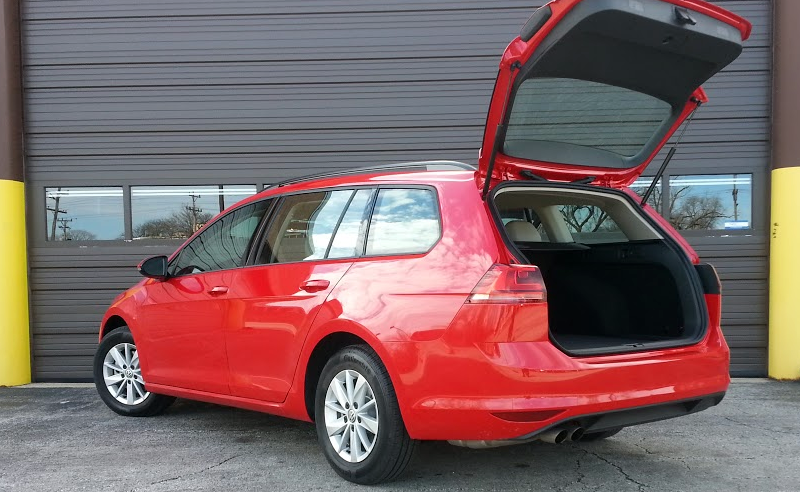 For 2015, Volkswagen’s compact wagon returns as a Golf, having been dubbed Jetta in previous model years.

This was a TSI gas-engine example in basic S trim. If you wanted to go, you had to insert a key into the steering column and rotate your right wrist (no push-button start). If you wanted to back up, you had to throw your right arm over the top of the seat next to you and look over your shoulder (no rearview camera). If you left the car out overnight and didn’t want to get “goosed” in the morning, you had to wear thicker pants (no seat heaters). 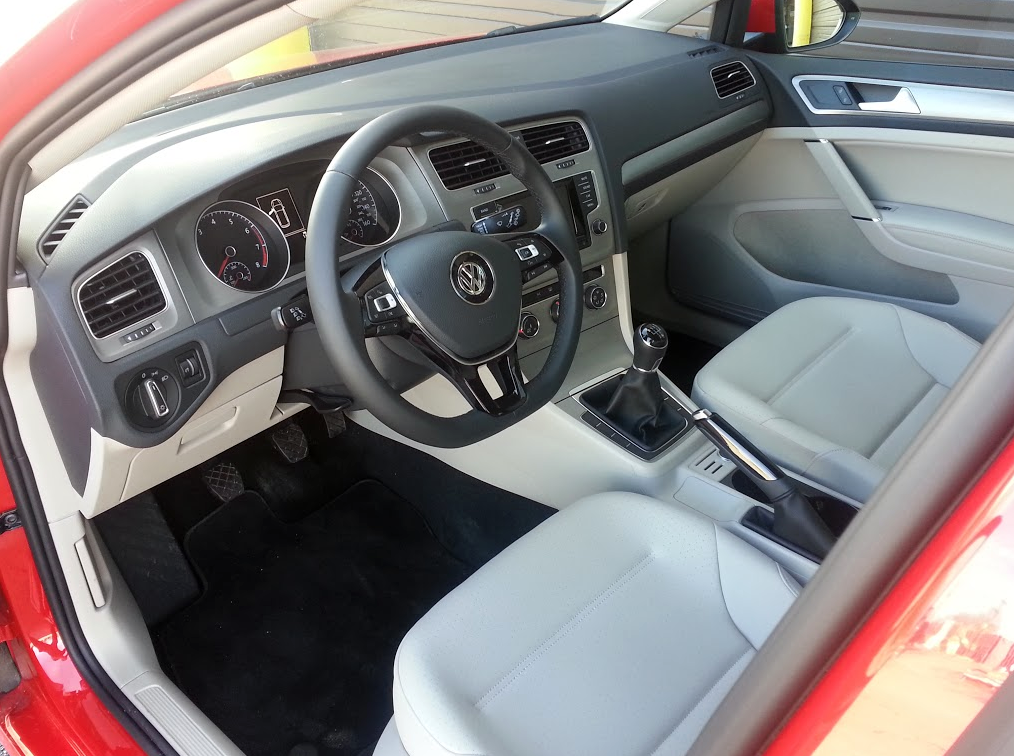 The SportWagen’s cabin feels surprisingly upscale given the price.

Not that VW is trying to reinvent the 1951 Hudson Pacemaker Custom here. Oh no. There’s still plenty up-to-the-minute technology installed in the SportWagen S, which is new to the U.S. market this spring. Plus, the things we mentioned that it doesn’t have—and a few more—can be had by stepping up to an SE or SEL version. If you can live without that stuff, though, you can put yourself into a comfortable, practical, and fuel-efficient car like CG’s no-options tester for just $22,215 with delivery.

In the car we drove, the overall interior ambience was nice, with beige leatherette upholstery and door coverings contrasted by dark soft-touch tops of the doors and dash. Distinctive brushed-metal-trim accents on the doors, dash, and around the climate controls and shifter are unexpectedly upscale for the price, and the steering wheel, shifter knob, and brake handle are wrapped in leather. Large storage pockets in all four doors are flocked inside—we don’t know if your bottle of energy drink cares what surrounds it, but at least it looks nice. 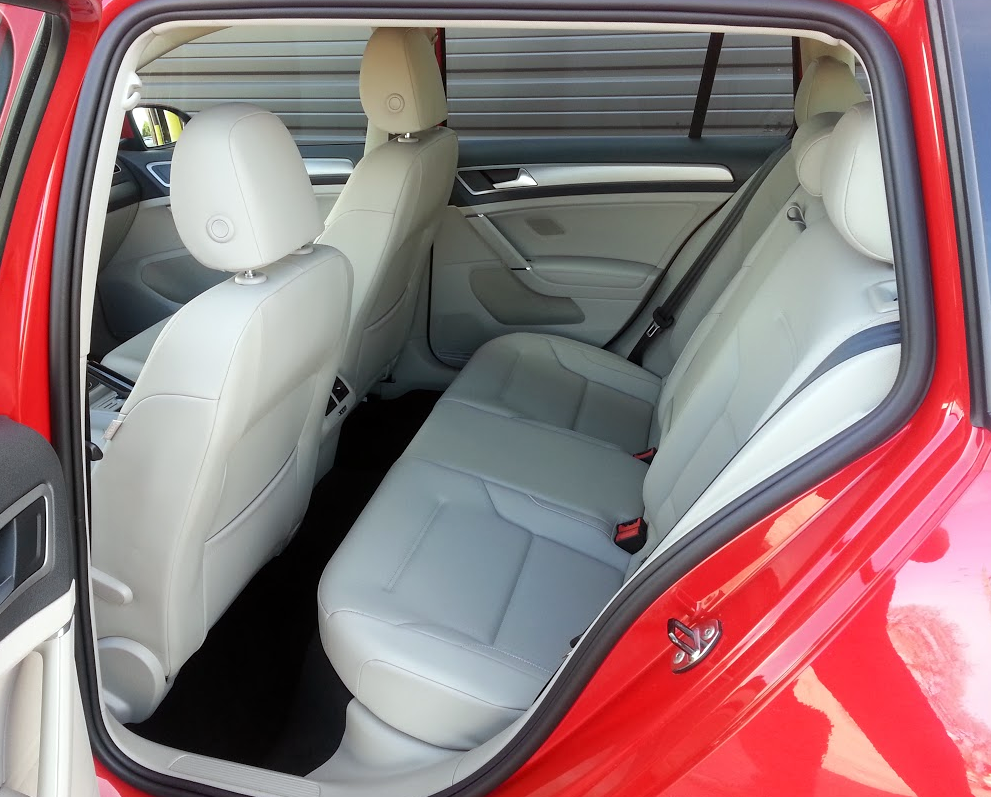 Second-row occupants enjoy a decent amount of head- and legroom.

The day-to-day stuff that will impact you every time you sit down in the SportWagen starts with seats that offer good support and comfort—and this is true in the 2nd row, too. There’s plenty of leg and head room in front, and sufficient quantities of both in back, where there’s enough room across for 2 adults. All-around visibility is fairly unobstructed, though rear-seat head rests can intrude a little bit. Doors open wide for easy ingress and egress.

In back, there is ample cargo room on the flat load floor, with additional space for small items under the floor and in troughs built into the far corners. Levers in the sidewalls of the cargo area release the 60/40 2nd-row seats, which fold almost completely flat with an uninterrupted transition from the cargo floor. There’s also a fairly large pass-through opening built into the rear seat.

Personal storage is not bad. In addition to the previously mentioned door pockets, the glove box is pretty big (even with the CD player built into it), there’s a pull-out tray with a card slot to the left of the steering column, and the console has 2 open cup holders and a covered bin with connector cord for a mobile phone. Only the cubby under the padded center arm rest is small. Rear passengers are confronted by pouches on the backs of the front seats, and can luxuriate on a pull-down center arm rest with 2 integral cup holders.

Controls have a somewhat nostalgic ease of use to them. The radio is simple to set and use. Climate controls are governed by 3 main dials and a very small strip of buttons for air conditioning, rear defroster, circulation mode, and “off.” Round speedometer and tachometer dials are easily readable, as is the multifunction display between them. The trip-odometer reset is an easily accessible button marked “0.0” just above the steering column. 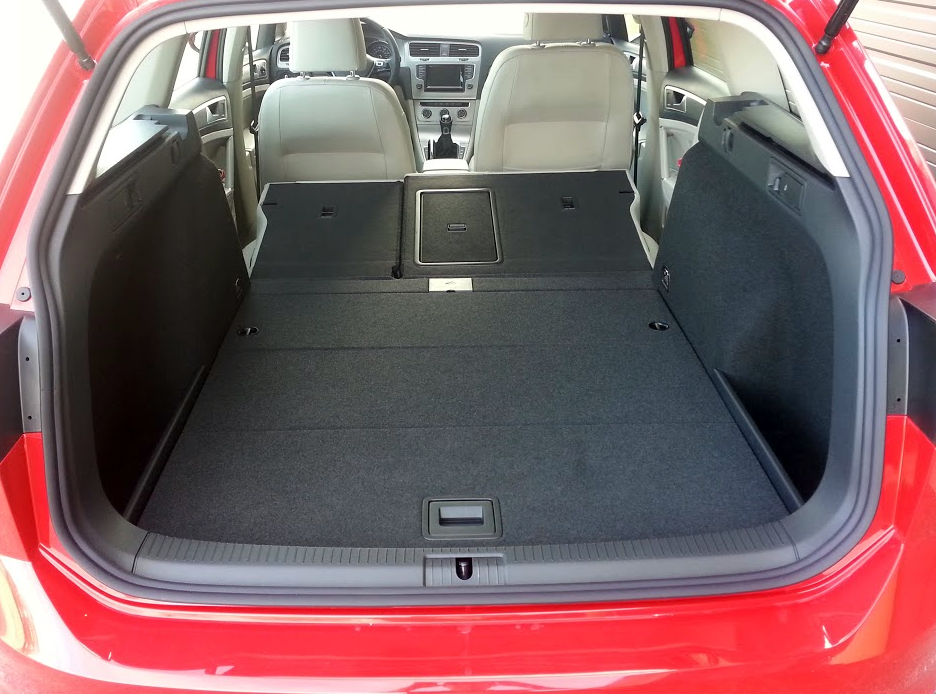 Oh, and the Golf SportWagen doesn’t drive half bad, either. CG’s tester came with the 5-speed manual transmission. (The S is the only gas-engine SportWagen available with the stickshift.) It has a light clutch that’s easy to modulate, and the shifter is fairly precise. Underhood is a turbocharged dohc 1.8-liter 4-cylinder engine rated at 170 horsepower. Torque peaks at a modest 184 lb-ft. It’s enough to get around with competently in most circumstances, though this driver thought the grunt drained away somewhat quickly once off the gas, so be ready to downshift a bit in traffic. Fuel economy was impressive. Yours truly’s 161.1-mile trip, with 64-percent city driving, averaged 27.51 mpg.

Ride quality on the 15-inch wheel-tire combination was good. (Higher-level SportWagens have bigger wheels.) Though light and easy, steering was responsive with almost no slop; handling was nimble from a wagon that has a pretty small footprint.

Comfort, economy, and driving satisfaction all in one? These could be the good new days.