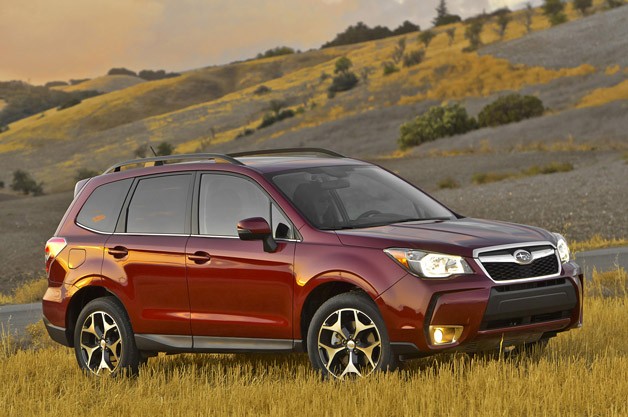 The 2014 Subaru Forester can be had with 2.5-liter or 2.0-liter turbocharged engines. Only the 2.5-liter engine can be mated with a manual transmission.

The good: Good visibility all around

The not so good: Turbo power comes only on pricier XT models

The redesigned fourth generation of the Forester kicks off with new styling, slightly larger dimensions, new powertrains, and a number of first-time features.

Wheelbase has been stretched 0.9 inch (to 103.9), which, with specially shaped front seat backs, contributes to added legroom for rear-seat passengers. They also benefit from a lower driveline tunnel and additional hip and shoulder room. The 2014 Forester is 1.4 inches longer overall and 0.6 inch wider than its predecessor. Cargo space is also increased, by as much as 9 percent.

The top two 2.5-liter models and all turbocharged Foresters incorporate the new X-Mode system, which provides extra control in certain low-traction situations and includes a hill-descent control feature. A rearview camera is now standard for all but base models, and an in-dash navigation system becomes more widely available. Turbo models incorporate SI-DRIVE (for “Subaru Intelligent Drive”), a multimode system that changes throttle response for faster acceleration.

The 2.5i Touring adds dual-zone automatic climate control, a one-touch folding rear seatback, and turn signals integrated into the exterior mirrors. New Touring-level standard equipment includes an in-dash navigation system with a 6.1-inch touchscreen, electroluminescent instrumentation, 8-speaker Harman/Kardon audio system, and a power liftgate that can be programmed to raise to a specified height. 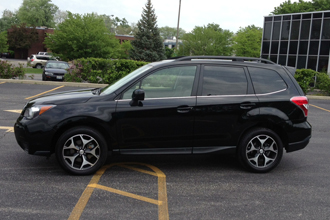 The 2.0XT Premium gets a turbocharged 4-cylinder engine, high-torque CVT with SI-DRIVE (including paddle shifters), X-Mode, a sport suspension with 18-inch wheels and uprated brakes, and leather-wrapped steering wheel and shifter handle. The 2.0XT Touring receives the same amenities included on the 2.5i Touring. Frontal styling of turbo Foresters is slightly different from that of 2.5i models. XTs also sport a body-color rear roof spoiler and dual stainless-steel exhaust tips.

The CVT is available at extra cost for the base 2.5i and 2.5i Premium, and the All-Weather Package is optional on Premiums equipped with the CVT. The in-dash navigation system is an optional for 2.5i Premium and 2.0XT Premium models and the 2.5i Limited. It comes with an upgraded 6-speaker audio system and smartphone integration with the Aha platform that creates access to Internet-based information and entertainment services.

Both Touring-level models can be equipped with a driver-assist technology package. Aside from keyless access and starting and high-intensity discharge headlights, the package extends Subaru’s EyeSight system to the Forester. EyeSight provides adaptive cruise control, pre-collision braking and throttle management, and lane-departure warning.

Forester 2.5i models come with a 170-horsepower 2.5-liter 4-cylinder engine that uses Subaru’s traditional horizontally opposed “boxer” design. The 2.5i and 2.5i Premium models come standard with a 6-speed manual transmission. A CVT that behaves like an automatic  is optional on those Foresters and standard on the 2.5i Limited and 2.5i Touring.

Our test car, the Forester 2.0XT, came with a 250-horsepower turbocharged 2.0-liter 4-cylinder engine. It also uses Subaru’s traditional boxer design. The only transmission available on turbocharged Foresters is a CVT. Note that all Foresters are all-wheel drive.

I kind of skipped a generation of Forester love, but I am back. Our test XT is fun to drive, and fairly frugal given the power. I suspect I can do much better than 23 mpg once the allure of great throttle response wears thinner. Subaru did a masterful job matching this engine with the CVT transmission. I frequently forgot that I was working with a CVT, which is about the highest praise you can give a non-fixed-gear transmission. Roomy, sporty, and no doubt still an ace in the snow. Lots here to love.

The previous Forester was my personal favorite in the class, and nothing in the 2014 redesign has changed that. Note, however, that our tester was the XT (turbocharged) model, which starts $6000 north of the base 2.5i. Still, that’s not out of line with those in the class with similar power, though one of the 2.5i models seems as though it would be a better value.

A wonderfully airy cabin, great visibility, AWD grip, sturdy (if a bit plain) interior trimmings, and a “just-right” balance of passenger-car and SUV attributes are high points of the redesigned 2014 Subaru Forester. However, the relatively steep sticker price of this 2.0XT tester has me thinking that a 2.5i model would be a better all-around value.