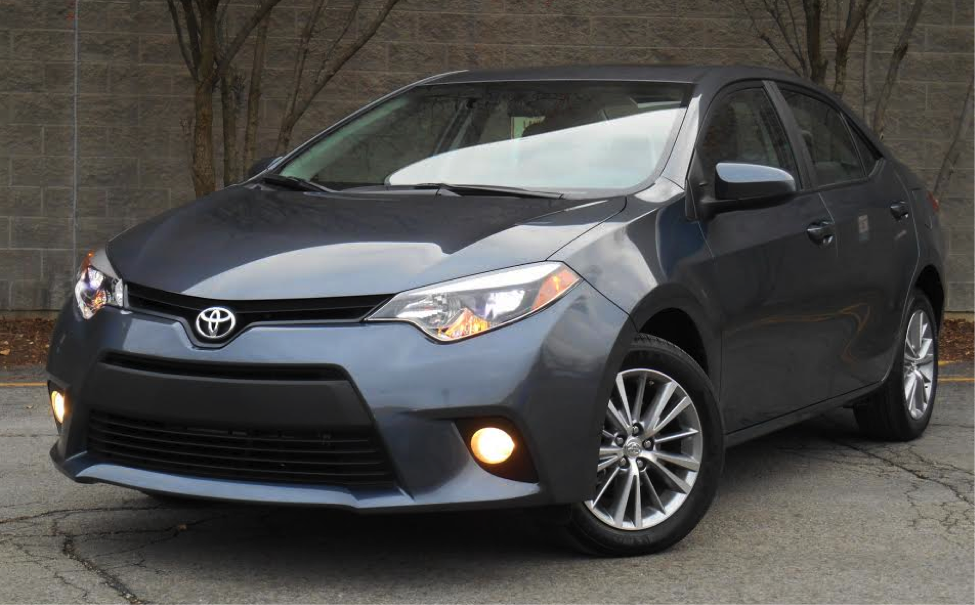 Our mid-level test car, an LE Plus, came equipped with automatic transmission. Our test car listed for $20,360 including destination.

The great: Nimble around town

The good: Cabin ambiance a big improvement over previous generation

The not so good: Modest power

In a more bell-bottomed and braless America—the one of roughly 40 years ago or so—small Japanese cars like the Toyota Corolla took advantage of a big opportunity. Inexpensive to buy and miserly with a gallon of gas, they turned out to be just what an increasing number of people wanted, especially when the first gas crisis hit in October 1973. Back then, American car companies didn’t have a good handle on small cars; the once-giant import force from Germany, the Volkswagen Beetle, was getting long in the tooth; and there was no such thing as competition from ambitious South Korean rivals. These rising sons of Japan were in the right place at the right time.

Of course, the times have changed, and so have the conditions. While Toyota, Nissan, and Honda busied themselves at going upmarket—even creating new luxury divisions—American brands finally figured out how to field appealing and competitive compacts. Plus, Hyundai and Kia established themselves in the U.S. by first being ready to contest the low-cost starter-car market that had once been the Japanese brands’ port of entry. The Corolla has hung on through all of this change, but it does so in a crowded field that’s a lot tougher to dominate now.

The 2014 Corolla makes a go of staying relevant with new styling on a longer wheelbase, improved interior materials in a roomier cabin, and more sound insulation. There are new tech features and transmissions, too.

The 132-horsepower 1.8-liter 4-cylinder engine that powered CG’s Corolla test car was not new, but the automaticlike continuously variable transmission (CVT) is. Like all such transmissions, this CVT transmits power without perceptible shift points, but like many of them it doesn’t do much to wring optimum power out of the engine. Passing kickdown was tolerably acceptable—which means it was just good enough to keep from diverting attention from the hullabaloo the engine was kicking up under aggressive acceleration. The CVT’s strong suit should be in aiding fuel economy. This driver notched 28.82 mpg from a run of exactly 128 miles, 74 percent of which was city driving. EPA figures are 29 mpg city/34 mpg highway, so it wasn’t exactly head of the class in this run. The little mill did turn over without protest after sitting out through a night of low-single-digit temperatures.

Steering is nimble enough for easy handling and tight-space maneuverability. Ride is about average when the streets are as well, but cracks and bumps can pack a punch that the front-strut/rear-torsion-beam suspension doesn’t take so well.

Toyota has created a nice interior environment for the ’14 Corolla. Many surfaces in the test car were soft to the touch or even padded a little, and there was some tonal variety on the door panels and cloth seats. Front seats had a nice bit of bolstering for grip, but could do with a bit more lower-back support. Controls are legible and easy to use. The climate system uses a rotating knob to dial in temperature, but has a small row of large buttons for HVAC functions. The radio was simple to program through the 6.1-inch touchscreen. 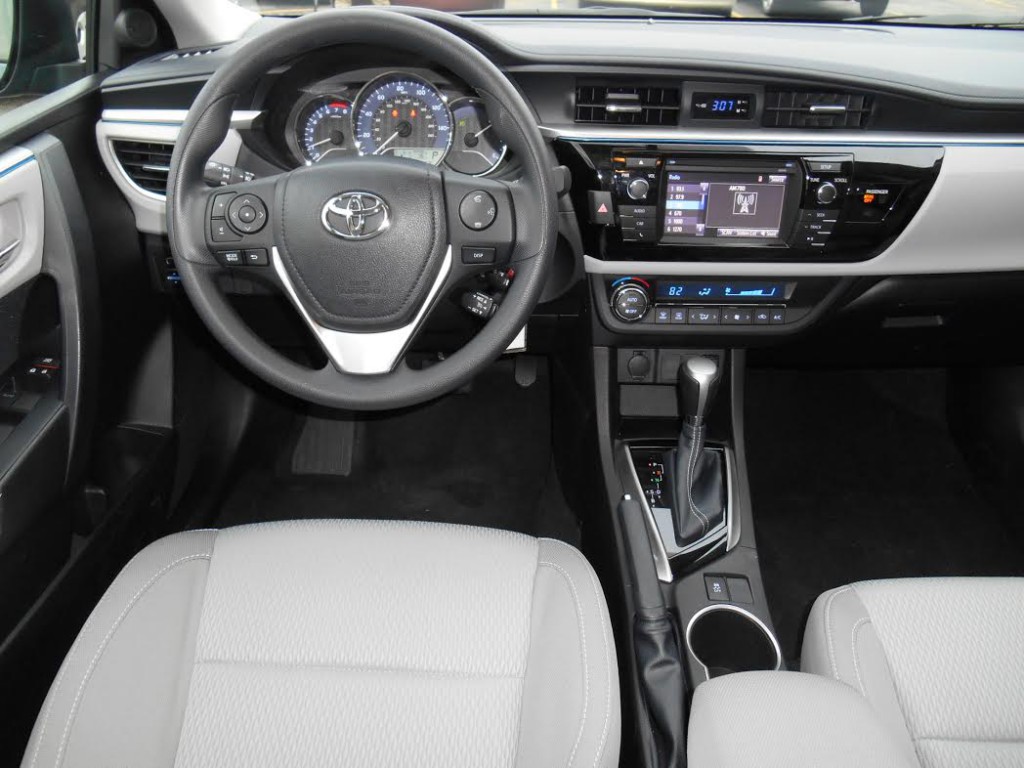 Corolla’s cabin is a much more pleasant place to be for 2014. Soft surfaces are now the norm, instead of the exception.

This sub-6-foot driver had all the leg room and head room he wanted behind the wheel. Long-legged drivers may make things a bit cramped for rear-seat passengers, though. Doors open wide to ease entries and exits. Visibility is good in almost all directions. Trunk space is fairly generous for a sedan in this class and the decklid opens wide for uncomplicated loading, but it does so on gooseneck hinges that extend into the cargo area. A 60/40 folding rear seat can extend carrying capacity when the need arises.

There are small cars we enjoy driving more than the Corolla—the Mazda 3 Grand Touring tested a couple months ago springs to mind—but the Corolla LE Plus does present a sound price proposition. Only the addition of the test car’s sole option, a power moonroof ($850), pushed the as-delivered tab past $20,000. That’s almost 4 grand less than the Mazda, which was more powerful, had a fully independent suspension, and boasted a few additional amenities. If you don’t have to have more zing with your bling, the Corolla LE Plus delivers a fair amount of the latter for a manageable fee, but in a competitive portion of the market, it needs every trick that it can muster.

Any Toyota starts life with a built-in benefit, because … well … it’s a Toyota. And the redesigned Corolla hinges its appeal on that point.

That’s not to say it doesn’t have anything else going for it. But while the front end screams, “New, stylish, and sporty!” the rest of the car just kind of says … “eh.”

Exterior appearance aside, the 2014 Corolla carries a restyled (one might say, “retro styled”) interior, along with a new transmission. While a six-speed manual remains standard and an aging four-speed automatic is offered on low-line models, newly available is a CVT automatic. Compared to the four-speed auto, the CVT nets an extra 2 mpg when mated to the standard 132-horsepower, 1.8-liter 4-cylinder engine, earning an EPA rating of 29 city/38 highway. Also offered are Eco models with the CVT (and a 140-hp version of the 1.8) that raise that to 30/42—quite a fuel-economy accomplishment.

Our mid-level LE Plus test car had the CVT, and it worked quite well. Unlike most CVTs, Toyota’s uses an internal 2-speed gearbox that backs the CVT part, giving it essentially a Low and High range. The benefit is not only a wider ratio spread, but also instant kickdown response, as the transmission simply drops from High range down to Low when you stab the throttle. This was one of my favorite features of the Corolla. On the down side, the combination didn’t provide a very lively takeoff from a stop, and anything but leisurely acceleration was accompanied by a loud, buzzy—and steady—moan from the engine. Not something that gives the impression of “quality.” Speaking of noise, that generated by road and wind on the highway has drawn some criticism, but I didn’t notice it being overtly obnoxious.

In terms of chassis dynamics, the Corolla seemed on par with others in the compact class. The ride was composed enough, at least over modest bumps (didn’t manage to hit any of Chicago’s famous potholes), and handling was characterized by light steering and modest body lean in turns. Not cushy luxury, not flingably sporty, just … eh.

The driving environment is a mixed bag. Our tester’s dashboard had a flat, vertical face with thin, light-colored padding set at right angles to a gently arched, horizontal, black top interrupted by a hump over the gauges. As such, it appeared somewhat old-fashioned compared to the angled, swoopy designs common today, but I rather liked the look. What I didn’t altogether like was the ergonomics. The radio controls consisted of volume and tuning knobs along with virtual station-select buttons on a small screen. The “buttons” weren’t very high, which made them tricky to hit on any kind of bumpy road, and some were out of easy reach. Climate controls were more conveniently placed, but while temperature was adjusted with a rotary knob, fan speed and mode were controlled by tedious, repetitive-step pushbuttons. The rather odd color scheme was accented with black, silver, and (equally odd) blue trim—and was carried onto the doors—all of which helped give the interior an interesting and almost classy look.

Interior storage is about average for the compact class. There’s a big glovebox, a small two-tiered console box, two cupholders and a forward bin in the console, and tiny map pockets in the doors. The trunk is less impressive. It’s wide at the rear, but sickle-shaped hinges dip into the load area. For some reason, Toyota chose to put the seat back releases inboard—toward the center of the car—making them awkward to reach. Furthermore, the folded seat back rests about five inches above the level of the trunk floor (making it difficult to slide in long objects), and the pass-through is restricted in width.

Visibility is a mixed bag. On the positive side, thin roof pillars give a far better all-around view than in most vehicles, something I really appreciate. Nearly all cars these days have a high trunk, which makes backing a trick, and while Corolla commendably comes standard with a wide-angle rearview camera, it didn’t work as well as most. The vertical dash made it somewhat difficult to see, and it had a rather grainy image that was not nearly as bright at night as most others. Furthermore, the sun visors didn’t extend and didn’t come close to covering the side windows, which seems just a bit cut-rate.

So the bottom line is that the Corolla strikes me as a good car that has to compete with some nearly great ones. It’s certainly worth considering, but it’s only a knock-out if you’re a dedicated Toyota fan.

Why is Tom watching Corolla sales so closely? Find out be reading ‘Testing the Water: The Five Most-Important Vehicles to Watch in 2014‘