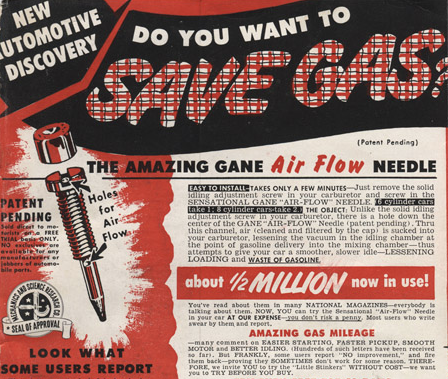 The Air Flow Needle didn’t actually do much. We’ve got five ideas here that will actually make your car or truck more fuel efficient.

Most gas-saving tips seem to focus on the things that drivers can do to eke a few more miles out of a tank of gas. Driving slower, driving less aggressively, avoiding prolonged periods of idling…we’ve all heard this stuff before.

If it’s your car that’s sucking up all the gas, why should you have to modify your behavior—what about the car itself?

The reason is simple. There’s not a whole lot you can do to make your car more efficient. Carmakers deliver their products in what is pretty much the most-efficient state of tune. If you want to save gas, your options are driving more responsibly (boring) or buying a more efficient car or truck (also boring, and potentially expensive). 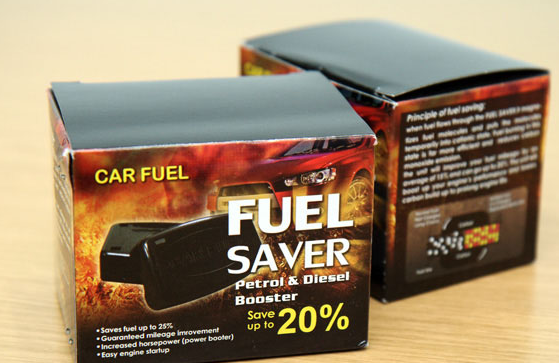 Fuel-line magnets like this one are not the answer. There are a few reasonably simple things you can try to make your car more efficient.

Well, there are ways to save gas…

Complied here are five rational steps you can take to improve the mileage of your car…a little. We say “rational,” because we regard filling in the grille of your car with Bondo to improve the aerodynamics (people really do this) to be a little over the top. We say “a little” because the sum fuel-economy improvement you may see as a result of implementing all five suggestions below might be 2 mpg.

Still, saving a little gas is better than doing nothing at all. And if you’re working to use less fuel, we salute you.

Note: All cost and mileage calculations assume fuel costs of $3.50 per gallon, vehicle usage of 18,000 miles annually, and observed starting fuel economy of 25 mpg. If you know of some other ways to save gas, let us know. The place to leave comments is down below. Ways to save gas:

Stop it! Five Habits to Break for Better Gas Mileage

5 Ways to Save Gas

It may seem antithetical to the rules of general automotive safety, but low-rolling-resistance tires (LRRT) roll more easily because they grip the road a little less tenaciously than do conventional tires.

Such tires are not a new thing, having found a home as standard equipment on any number of hybrid and electric vehicles. A popular example of the breed is the Bridgestone Ecopia.

Per Bridgestone, using the example of a 2014 Honda Accord LX, Ecopia tires will improve fuel economy by up to 5 percent over the same car shod with its original-equipment tires.

Thoughts: The good news is that Ecopia tires cost no more than other Bridgestone tires; the bad news is that with less grip and firmer sidewalls, these tires will take some of the fun out of driving, and possibly reduce ride comfort a bit as well.

Additionally, you’ll want to wait to replace your current tires for as long as possible. It makes little economic sense to swap perfectly good tires for new tires just to save a little money.

A number of lubricant companies now produce synthetic and/or synthetic-blend motor oil, but Mobil is one of the few that actually makes specific fuel-economy claims, however modest they may be. To wit:

Savings would be based on 0.2-2.3 percent potential fuel economy improvement obtained by switching from higher viscosity oils to a 0W-20 or 0W-30 grade. Actual savings are dependent upon vehicle/engine type, outside temperature, driving conditions and your current engine oil viscosity.-www.mobiloil.com

Thoughts: Assuming that a car owner car can shift to a lower-viscosity blend of Mobil 1, we’ll assume a 2-percent fuel economy improvement—about $50 per year. However, a Mobil 1 oil change performed at a Mobil 1 quick-lube location costs exactly $25.00 more than a conventional oil change ($69.95 versus $34.95). Assuming two oil changes during our 18,000-mile year, the net cost savings is exactly $0.00.

According to the U.S. Department of Transportation, each 100 pounds of weight you can excise from a vehicle will result in about a 1-percent improvement in fuel economy. This is why so many gas-saving tip lists suggest clearing your trunk of unneeded cargo.

One of the heaviest things in your trunk, however, and seemingly one of the most important, is the spare tire. But, if you’re willing to chance encountering a flat tire with a can of fix-a-flat instead of a spare, there is gas to be saved. At about 50 pounds, the average spare tire and jack assembly do a lot of freeloading given how often they’re really needed.

Thoughts: From your first-year windfall of about $15, you need to subtract roughly $10 for a can of fix-a-flat. For the record, we think this is a terrible idea if your travels consist of mostly of highway driving. Trusting a can of goo to fix your tire in an urban environment with plentiful places to pull over is one thing; being stuck on the side of the busy highway is quite another.

We’re not being clever here. Gas is heavy stuff. At about 8.5 pounds per gallon, a typical 16-gallon gas tank clocks in at about 135 pounds. That means a full gas tank is taxing your car to the tune of a small adult passenger or almost three spare tires.

For those making more frequent filling-station stops is not a hardship (or just an annoyance) we suggest only filling your fuel tank half way. This simple action will, on average, reduce the weight of your car by almost 70 pounds.

Thoughts: While this suggestion is simple enough on the surface, there are parasitic economy losses associated with stopping at a gas station. In addition to idling around the lot, you also need to stop and start your car additional times. And, if you’re in the habit of stopping for a snack each time you (half) fill up, you’ll pretty much wipe out all of your savings.

In tests conducted by Consumer Reports, a 2013 Honda Accord gave up 5 mpg when shod with an empty bike rack. Predictably, fuel economy dropped further when bikes entered into the picture.

Thoughts: Reliable numbers for the impact of roof racks are difficult to come by, mostly because the aerodynamics of vehicles vary greatly. No doubt a rack on a Honda Accord will have a greater impact on fuel economy than it might on a crossover such as the Honda Pilot. Still, leaving a rack on the roof of your ride when it’s not needed is bad for your pocket book.

Ways to Save Gas