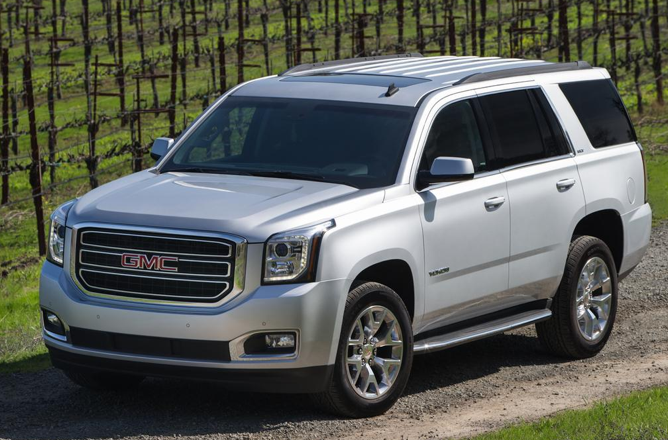 Consumer Guide’s test Yukon arrived in SLT trim and loaded with options. Including destination charge, our test car came to $64,520.

The not so good: High cargo-area liftover, pricey options

One day almost 20 years ago, I went to a local media event at which General Motors provided the chance to try all-new full-sized sport-utility vehicles from GMC and Chevrolet. Upon arriving home, my somewhat car-crazy young son asked me what I had driven that afternoon. Suddenly a little tongue-tied, I mashed the two models into one.

That’s how interchangeable the GMC Yukon and Chevy Tahoe may have seemed in the public mind for years, virtual equivalents of each other except for grille styling and the logo in the middle of the steering wheel. That’s not necessarily the case any more, as Consumer Guide®’s test of a 2015 Yukon SLT—alongside a Tahoe LTZ—proved.

Yes, they both had different grille styling and steering-wheel hubs, and they were equipped almost identically. However, with a bottom-line price of $64,520 (including delivery), the GMC job was $3820 cheaper. How could that be? The secret lies in a careful dovetailing of trim levels between the two makes. 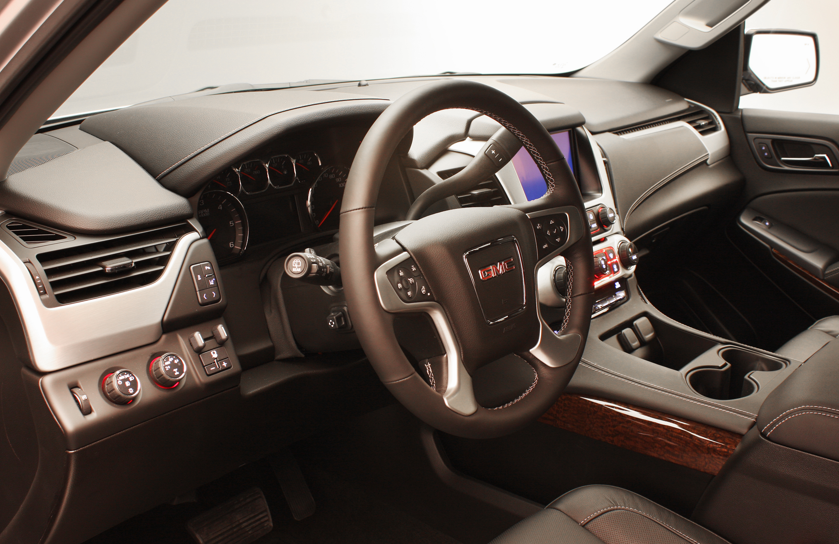 In terms of materials and workmanship, Yukon’s cabin doesn’t fall far shy of those found in luxury-brand trucks.

Both brands come in a choice of 3 models (6 if you count 2- and 4-wheel-drive separately), and they both draw from essentially the same well of available equipment. Yet, while the LTZ is at the top of the Tahoe pecking order, the SLT is the middle of the Yukon roster, with the plusher and more powerful Denali above it. The SLT features a few more standard items than the mid-level Tahoe LT, but not as many as the LTZ. That’s why it starts at $57,735 with 4-wheel-drive, while the Chevy we tested was based at an even $62K.

Specifically, the Yukon SLT lacks the LTZ’s suspension with electromagnetically adjusted damping. Base wheels on the GMC are 18-inch alloys, in place of the premium Chevy’s 20-inchers. The “Jimmy’s” halogen headlamps, 9-speaker Bose audio system, and 60/40 split-bench second-row seats are also not quite up to LTZ standards. A subtle interior difference is that the cup holders and storage bin in the middle of the console are not covered in the SLT like they are in the Tahoe LTZ.

2015 Lincoln Navigator: A Step Up in Large SUV Luxury

However, driving these vehicles back-to-back as I did, you could barely have told them apart. The test Yukon tacked on the Tahoe’s 20-inch polished-alloy wheels and 2nd-row bucket seats as options. Other extra-cost packages applied to the Yukon matched the ones fitted to CG’s Tahoe: Sun and Entertainment (power sunroof, extended satellite-radio subscription, navigation, rear entertainment system), Max Trailering (3.42:1 axle ratio, trailer-brake control, 2-speed transfer case), and Theft-Deterrent System. One slight deviation was that the trailering package on the Yukon included a leveling feature that wasn’t on the Tahoe LTZ, with its different standard suspension. 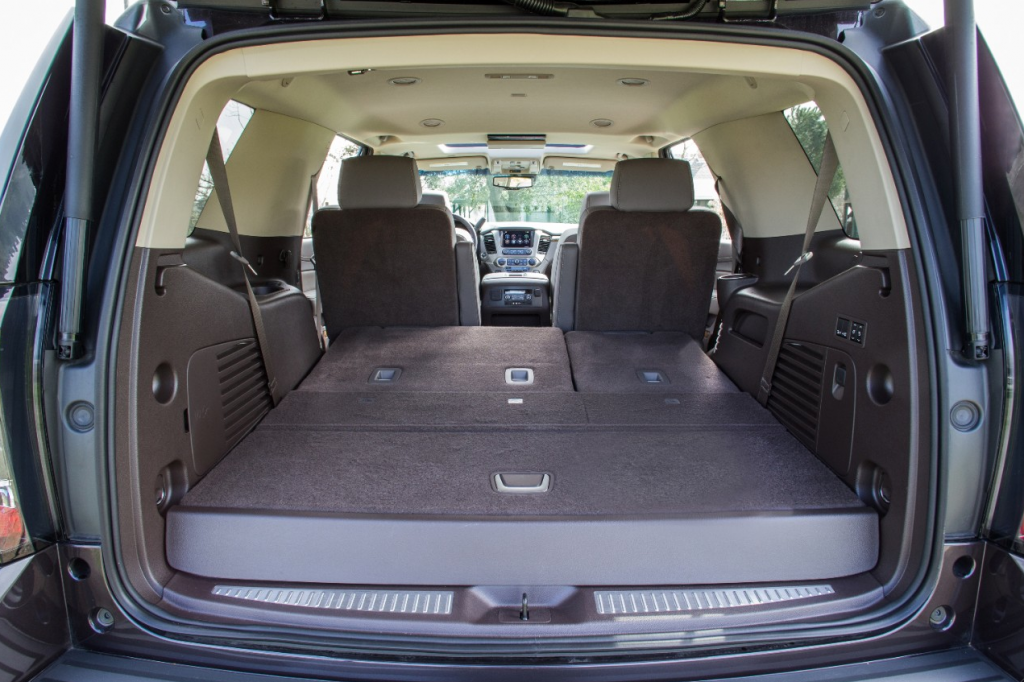 Yukon boasts a spacious cargo bay, but the elevated load floor can complicate the loading of larger items.

On the road, ride, handling, and power delivery were practically impossible to tell apart. Unfortunately, that meant the Yukon suffered the same slow-to-react standing-start throttle behavior that the Tahoe exhibited from their shared 5.3-liter V8/6-speed automatic powerteam. Where the Yukon did separate itself, and not to its credit, was at the gas pump. After a run of 106.4 miles—57 percent under city driving conditions—the Yukon averaged only 13.71 mpg. That was more than 1.5 mpg poorer than the Tahoe did with a higher percentage of city driving. Note that editor Tom Appel saw substantially better fuel economy from our Yukon, which raised our overall test average to 16.2 mpg.

Certainly, nearing the $60,000 mark for a vehicle is not something to be undertaken lightly. If you’re going cross it, though, the well-optioned Yukon SLT comes off as good value relative to the Tahoe LTZ, with only some minor sacrifice of grade of suspension, audio, and headlamps at a savings of almost $4000. That should keep you perfectly happy at the wheel of your Yahoo . . . er, Toucan . . . ah, you know what I mean!