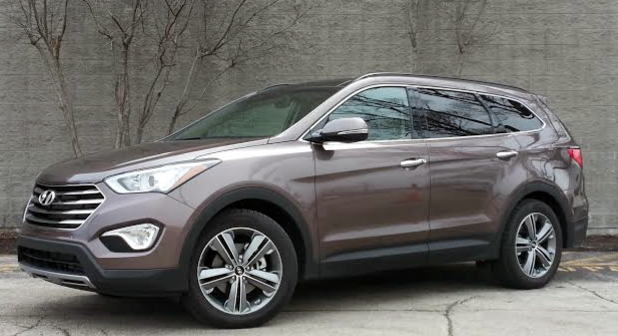 The Good: Upscale trimmings, plenty of features for the price

The not so good: Third-row seats are best suited to small passengers

Though the 2015 Hyundai Santa Fe is fundamentally the same as the 2014 model, it has picked up a few things. Steering and suspension have been retuned, daytime running lights and a driver’s side blind-spot mirror are standard, and an automatic-opening liftgate is newly available. Oh, yeah . . . one other thing the ’15 Santa Fe has gained is a Consumer Guide® “Best Buy” rating. 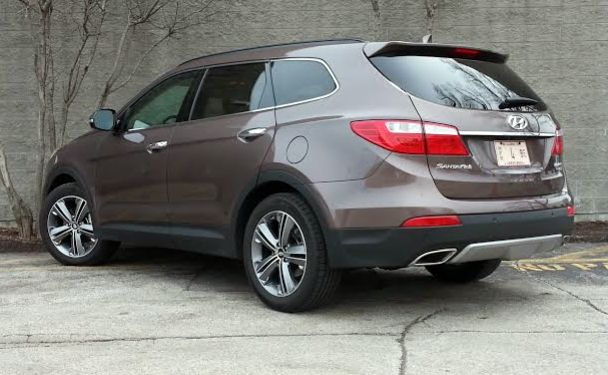 At CG we like the Santa Fe for its useful power, good (if maybe not completely great) ride, spacious and quiet interior, and manageable pricing. That’s the conclusion we reached and then confirmed driving the high-end Limited all-wheel-drive model in 2014 and again in 2015. 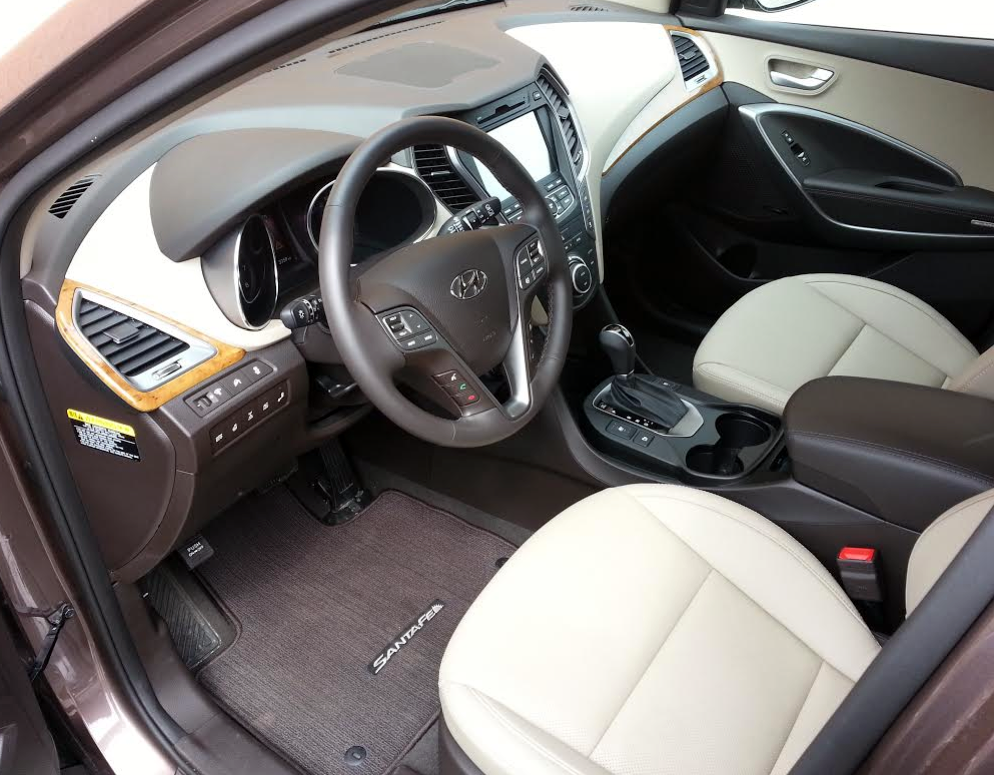 The base price of the Limited AWD has gone up $550 from 2014 to an even $36,000. The ’15 model does include standard 19-inch alloy wheels that were in an option package previously, and it comes with the aforementioned automatic liftgate that raises itself if you stand within 3 feet of the vehicle for more than 3 seconds while the key fob is in your possession. Meanwhile, the Limited still comes with a 3.3-liter V6 with 6-speed automatic transmission; hill-descent control; fog lights; heated mirrors with turn-signal indicators; roof rails; a windshield-wiper deicer; proximity-entry key; leather upholstery; heated front seats; 2nd-row captain’s chairs; dual-zone climate control with an ionizer and rear-seat vents; driver-selectable steering modes; a rearview camera; AM/FM/satellite/HD radio; Bluetooth telephone connectivity; and Blue Link telematics for voice text messaging, destination searches, and summoning roadside assistance. All-wheelers add an on-demand system with an AWD lock control.

Unchanged from last year is this driver’s good opinion of the Santa Fe’s 290-horsepower gasoline direct-injection, which delivered commendable power under a variety of conditions. This year he had the Santa Fe for a 212.9-mile trip—38 percent of it city-style driving—and averaged 21.11 mpg. That’s not sterling, but it is better than the 18.84 he saw in 2014 from a trip with almost 60 percent of miles in the city. Ride is acceptably cushy—this tester liked it better this time than he did a year ago—and steering and handling are easy and unchallenging. The Santa Fe isn’t into beating up drivers.

Front and middle-row seats are comfortable, with good leg room. The third row may accommodate tolerant adults for a while, but it’s a space better left to a younger audience. 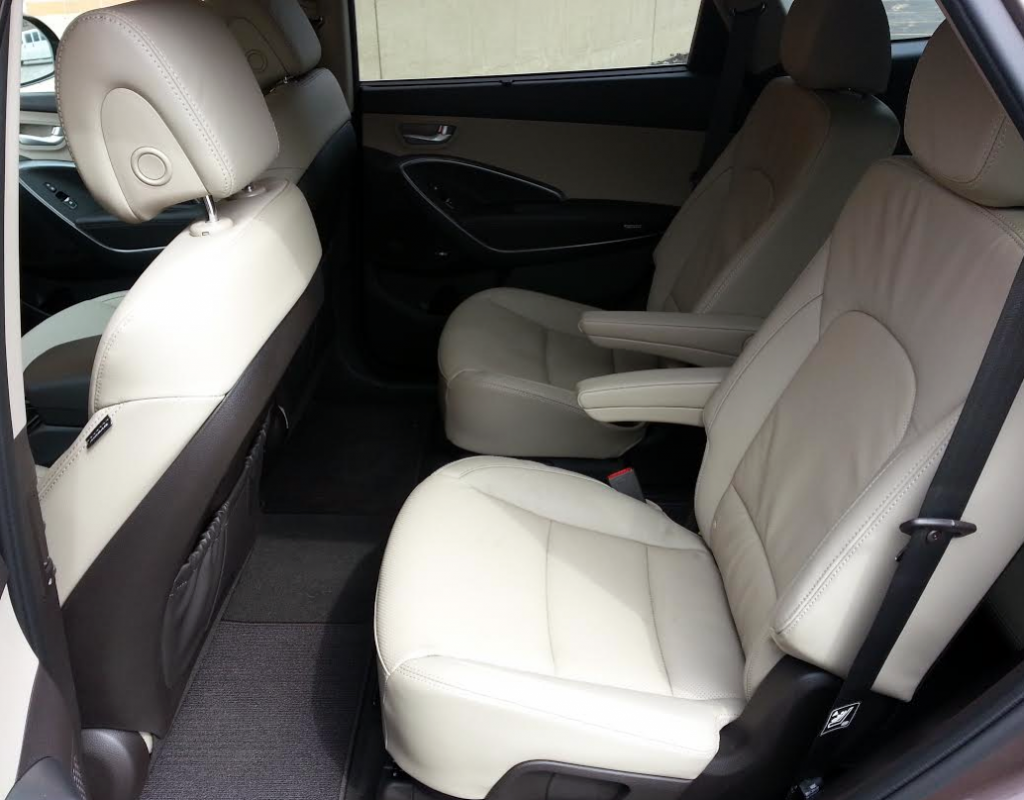 Seat materials in the 2015 test vehicle were attractive and colorful. Plastics on top of the dash and doors have some give at the touch; they’re not overly plush, tending toward hard plastic, but soft enough at the usual touch points. Controls are easy to see, reach, and use, and visibility is not bad, with perhaps some obstruction at the rear corners.

All doors feature pockets with bottle holders—large in front, a little less so in the rear doors. The center console contains cup holders, a small open space ahead of the shift lever with power outlets, a deep cubby with an arm-rest lid, and a so-so glove box. Second-row passengers have access to storage pouches on the back of both front seats, and a cup holder and shallow tray molded into each side panel serve those consigned to the 3rd row.

With all rows of seats up, cargo space is slight in back. However, the easy tug of a cord makes the 50/50 3rd-row seats fold flat to form a generous cargo hold. For even more hauling space, the middle-row individual seats fold, though they rest a few inches higher than the rest of the cargo floor.

CG’s 2015 Santa Fe tester was equipped with a $4650 option package that turned the vehicle into a somewhat oxymoronic Limited Ultimate. Much of the Ultimate-group equipment matched up to the Technology Package add-ons that our 2014 sample had: high-intensity headlights, a panoramic sunroof, rear parking assist, a heated steering wheel, driver’s memory seat, heated 2nd-row seats, navigation system on an 8-inch touchscreen, and an improved audio system. The Ultimate package also lists LED taillights, ventilated front seats, premium door-silll plates, and a 115-volt power outlet. With carpeted floor mats, the bottom line on our latest Santa Fe Limited AWD came to $41,695 delivered. 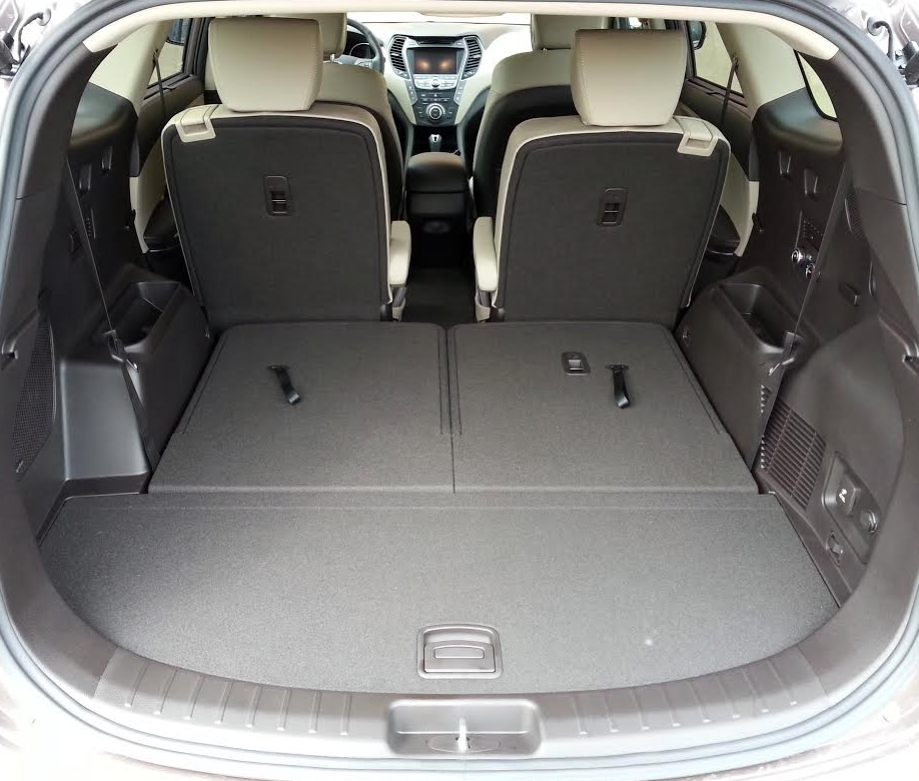 Cargo space is limited with the 3rd-row seatbacks upright, but they fold flat to provide generous room.