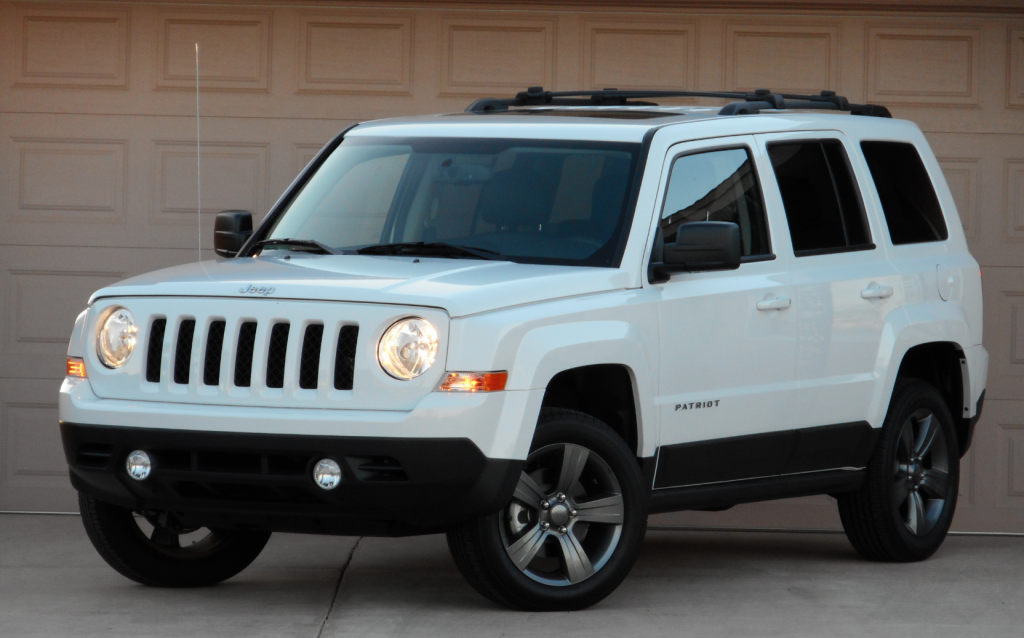 At $16,895 in front-drive form, the Jeep Patriot starts out as the least-expensive SUV on the market, but that base Sport model lacks such expected niceties as air conditioning and power windows and locks. Those features are all standard on the Latitude 4×4 tested, which started at $24,795 and ended up at $29,510 with some options and destination.

In the hotly contested compact SUV class, Patriot stands as an aged veteran. While that might be an advantage in some arenas, in the automotive world, it’s usually not.

Like its Compass running mate – with which it shares underskin mechanicals and an interior – Patriot arrived on the scene for the 2007 model year. Unlike the Compass, however, it has never had a serious styling change, something its sibling received for 2011. Instead, Patriot has soldiered on as the cut-rate counterpart to the rather ritzier Compass, making its mark as the least-expensive compact SUV on the market – whether in front- or 4-wheel-drive form.

Trouble is, it’s hard to make it stay that way. Patriot is one of only three vehicles I can think of that don’t come standard with air conditioning (the other two also being Jeeps: the new Renegade and the venerable Wrangler), and among the few that make you pay extra for power windows and remote power locks. And when you add all those niceties most people now expect, it’s no longer the bargain it originally looked to be. 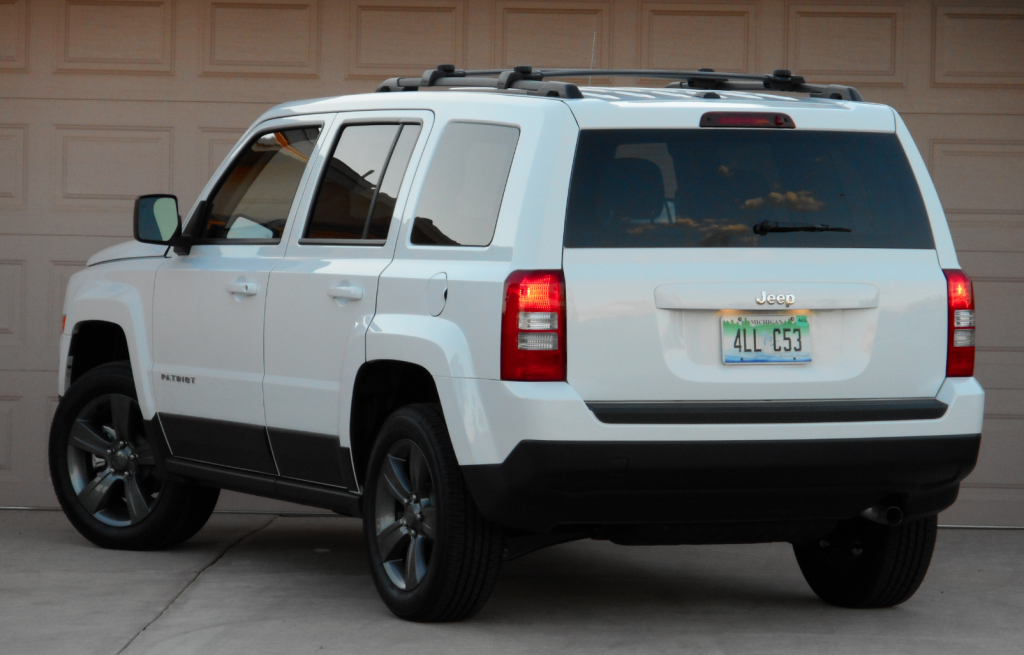 Although it’s among the shortest of compact SUVs, Patriot’s boxy contours provide plenty of passenger and cargo space.

Which isn’t to say it doesn’t have its strengths. Patriot is offered with a dizzying number of models, powertrains, 4-wheel-drive systems, and options, meaning lots of variations are available that can be tailored to suit your needs, whether those be on-road or off. (Some models are Trail Rated, which means they’re pretty darn capable in the dirt.) But on the downside, that means it’s very unlikely a given dealer is going to have exactly what you want, so you may have to buy more Patriot than you intended in order to get the few features you need.

Our test vehicle was a mid-line Latitude in 4×4 form, likely a popular choice in the snow-belt states. Its base price of $25,790 (including $995 destination) brought the larger 172-horsepower 2.4-liter engine (there’s also a 158-hp 2.0) with 6-speed automatic transmission (a 6-speed manual and CVT are also available) along with air conditioning, power windows, power heated mirrors, remote power locks, cruise control, heated front seats, tilt (but not telescopic) steering wheel, CD player (not every vehicle offers one now), and a 115-volt household power outlet. So it was a pretty well-equipped vehicle at that price.

The 2.4-liter/6-speed automatic powertrain provided a decent (though hardly neck-snapping) full-throttle jump off the line, and the transmission kicked down quickly for good passing power. But the combination also proved a bit thirsty as compact SUVs go, with nearly 200 miles of about 40 percent highway driving netting us 19.9 mpg. The EPA rating is 21 city/27 highway, so we didn’t even manage to hit the city number. However, our test car had less than 1500 miles on it, so perhaps it wasn’t yet “broken in”; once it is, mileage might improve.

Our Phoenix test venue didn’t provide much in the way of rough pavement, but the Patriot seemed to ride quite comfortably. It also handled well enough and felt nimble, so on-road dynamics are at least par for the class.

Where it shows its age is in the interior, though it’s not all bad. 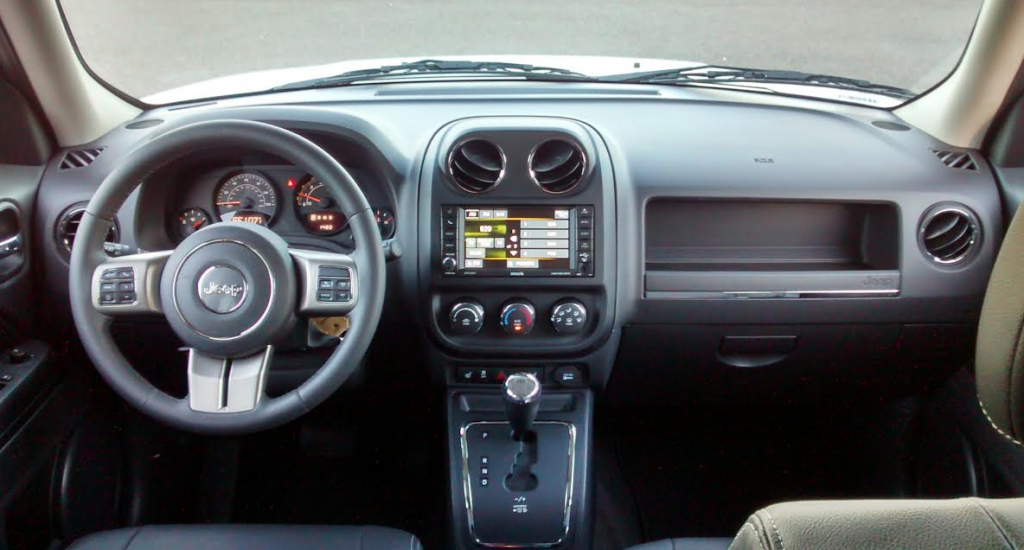 Although the dashboard is hard plastic and the overall look is rather bland, most “touch points” are padded. And while many current competitors incorporate overly complex audio and climate controls – often seemingly in an effort to look “techy” – the Patriot’s are fairly simple, at least for the features offered. The audio system is mounted high, within easy reach, and includes a volume knob. Tuning, station selection, and other adjustments are made through an easy-to-decipher touchscreen, which also hosts the navigation and phone functions. USB and Aux inputs are behind a flap right on the face of the audio system. Climate controls consist of three rotary knobs that are quick and easy to adjust. Overall, Patriot earns kudos for its controls.

Visibility goes a bit the other way. Front roof pillars are fairly thick, as are – to a lesser extent – the side pillars, both serving to block more vision than we’d like. The rears, however, are relatively thin, but we were surprised to find that there was no rearview camera. Furthermore, the roof extends far forward, not only giving somewhat of a “closed in” feeling, but also potentially blocking your view of overhead traffic lights (if you’re first in line). Also, the sunvisors, when flipped to the sides, don’t extend near far enough to completely cover the side window. 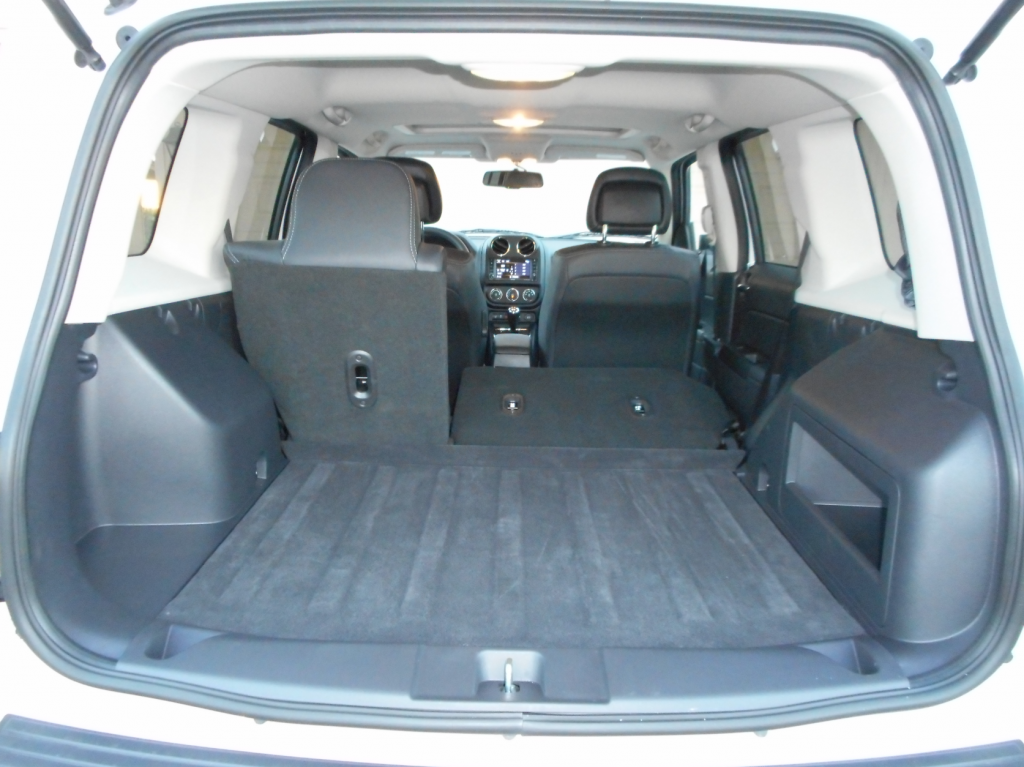 Second-row seat backs fold to create a sizable cargo area with a nearly flat and level load floor. The right-side wall bin reduces the useful width at the back, but makes for a handy place to stash small items.

At about 174 inches stem-to-stern, Patriot is on the short side as compact SUVs go (a Toyota RAV4 is 180 inches), which makes it comparatively easier to park but also gives it less interior volume. Yet neither passenger nor cargo space really seem to suffer much. There’s plenty of headroom and legroom front and rear for 6-footers to sit in tandem, and those in back sit on comfortably high seat cushions. Far taller folks can fit up front, but maxing out the seat travel will limit legroom behind them, leaving only enough for those no taller than 5’9 or so. Ingress and egress are easy through large doors, though short folks may find the step-in a bit high.

The cargo area is reasonably large and “boxy” in shape. One side wall at the rear has an indent, the other a built-in bin. Seat backs fold nearly flat and level with the cargo floor, and though there’s no “official” storage space under the floor, some items could be stashed around or in the wheel of the spare tire.

Interior storage is about average for the class. The glovebox is on the small side, but it’s augmented with a large open dash tray above it, along with three small console bins, two cupholders, a decent-size console box with a flip-up cell-phone compartment in the lid, and small map pockets.

Patriot makes its strongest case to those who are seeking a capable, low-cost sport-ute that leans more to the “utility” side than the “sport” side, and prefer simple and basic to high-tech and flashy. Though the latter is where the market is clearly heading, some may feel that the former never really goes out of style.