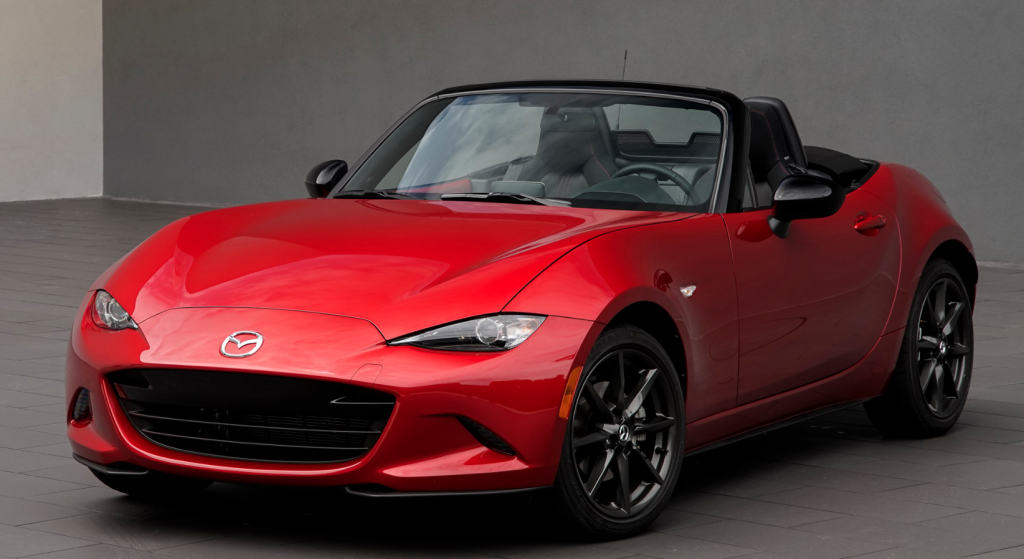 In its most radical redesign to date, the 4th-generation Mia … er … MX-5 is shorter, lighter, quicker, and more fuel-efficient than its predecessor, and makes available numerous new high-tech features. The base Sport starts at $25,735 including destination, with the top-line Grand Touring listing for just under $31,000 before options.

Maybe it was the day …

Maybe it was the road …

Maybe it was the scenery …

But the sunny preview romp along the twisting ribbons of asphalt that wrap through the high-desert mountains of Southern California made me fall for the Mazda Miata all over again.

For only the fourth time in its 26-year history, Mazda’s iconic Miata (I still can’t bring myself to use its currently proper “MX-5” designation) receives a complete redesign for 2016. Most obvious is that it abandons its traditional “jellybean” contour to adopt Mazda’s current design trend of sweeping lines and sharp creases. Less noticeable are shorter front and rear overhangs and a windshield moved rearward to help accentuate the long nose.

It all gives the Miata a more aggressive, almost exotic appearance, and the rest of the car follows suit. 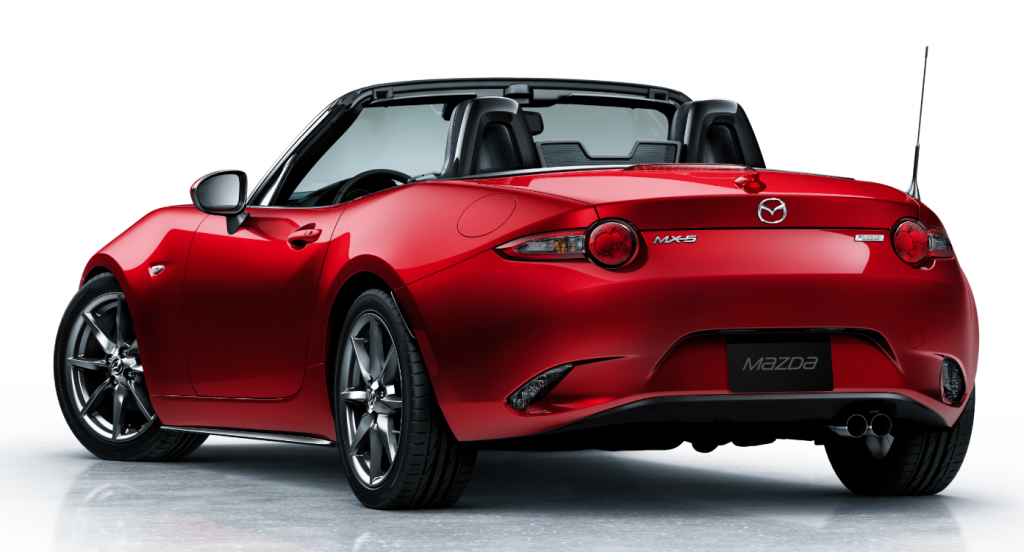 While the Miata retains its previous 2.0-liter four-cylinder engine, it’s now graced with the company’s SKYACTIV technology. On the positive side, fuel economy is up about 25 percent, with the current EPA ratings standing at 27 city/34 highway with the standard 6-speed manual transmission, 27/36 with the available 6-speed automatic. On the down side, horsepower drops from 167 (158 with automatic transmission) to 155, but torque is up a bit and the power curve is fatter below 6000 rpm. That, along with a weight reduction of about 150 lbs., contribute to what Mazda claims is a quicker car, quoting independent tests that put the benchmark 0-60 time at about 5.9 seconds, a bit better than the previous generation. That’s quite good as inexpensive sporty cars go (the competing Scion FR-S clocks in at a few tenths slower) and it certainly provides ample oomph when driving. Yet Mazda insists that the Miata has never been about raw power, focusing instead on a spirited, enjoyable driving experience.

While we’re on comparisons between what’s called the “NC” (3rd) and “ND” (4th) generations, it’s worthwhile noting some other significant changes.

As with the outside, the inside follows modern Mazda practice with a prominent tachometer dominating the instrument cluster and an equally prominent screen dominating the center dash, with controls for the screen residing on the center console. This contrasts with the traditional dual-gauge instruments and simpler “button-and-knob” controls of the previous generation. Some might find the new design quite contrary to the established sports-car creed, but it works well enough, and is in part necessitated by the expected advancement in available features.

Three trim levels are offered for 2016: base Sport, track-oriented Club, and luxury-oriented Grand Touring. Among the new items available are standard Mazda Connect, the company’s infotainment system that comes with a 7-inch touchscreen, along with a host of optional high-tech safety features that include lane-departure warning, rear cross-traffic alert, blind-spot monitor, and automatic high-beam control.

It’s hard to see here, but this is one of the few promotional photos showing the MX-5 with its top up. Unlike the previous generation, only a soft top is offered, but it includes an aluminum panel over the passenger compartment and can be easily raised and lowered while sitting in the driver seat.

Something the Miata lost was its formerly available retractable hard top, which was offered on high-line models in place of the standard soft top; you could also get a lift-off one-piece hard top. No hard top – of any type – is available on the new car … at least, not yet. Instead, the soft top has an aluminum panel over the front half of the passenger compartment that cuts down on noise and “wind flap” at speed, so it’s a nice compromise. It’s also quite well insulated, thus further minimizing wind noise, and it can be easily raised and lowered with one hand while sitting in the driver seat–a really handy touch.

The last Miata I’d driven was a 2015 retractable hard top test car, and we had it during weather that discouraged dropping the top. Perhaps partly due to the latter, it didn’t come off as quite the wholly enjoyable experience I was expecting. The cabin seemed somewhat noisy and slightly claustrophobic, the engine was noticeably coarse, and the shifter was unpleasantly notchy.

But driving the 2016 version was a different story … and a better one. Even with the top up it felt “airier” somehow, the engine seemed to make nicer noises, and the shifter was about as sweet as it could be, snicking from gear to gear like the proverbial hot knife through butter. Clutch action was also very light and positive, making the frequent gear changes needed while driving through those mountain roads a gratifying reflex reaction.

Also made evident on those roads was that the Miata is still – unequivocally – a sports car. Steering was perfectly weighted, turn-in was sharp, and the car seemed to dive for the apex of a corner as though it had a magnetic attraction. These are the roads the Miata was born to run, and it does so with the apparent joy of a Labrador with its head out the window, tongue lapping in the breeze at the corners of a wide grin.

But in the real world (which Southern California most certainly is not), these roads are the exception rather than the rule. Although Chicago-style potholes have been legislatively banned from the state, what rough patches we found were traversed with little fanfare, indicating the Miata remains a perfectly livable day-to-day car even if your common commute contains very real-world bumps.

One limitation, however, is how much you can take with you. The trunk is tiny by absolute standards, though its 5.3 cubic feet will hold a couple’s weekend luggage or a good amount of groceries. It’s also tight in the cockpit, as there’s no traditional glovebox, its purpose being transferred to a small, rather inconvenient covered cubby on the rear wall of the cabin between the seat backs. The only other storage areas are two console cupholders and the usual map pockets, meaning stash space is at a premium.

The interior of the mid-level, sport-oriented Club model gets racy red stitching and body-colored door tops …

Compared to the previous generation, the new interior is decidedly more upscale. At least in the Grand Touring model tested, the hard plastic dash is offset by a contrasting leather-covered swatch across its face along with padded armrests and door-panel sides, with the door tops painted body color. Seats are now made of fabric stretched across a frame to save weight, and they proved as comfortable as conventional springs-with-padding cushions.

As mentioned, the new control layout follows current Mazda practice, consisting of a dashtop screen with console-mounted knobs and buttons along with three-dial climate controls. While the climate controls are simple to reach and use, infotainment adjustments often take multiple steps to accomplish, and some might find performing them requires a long look from the road.

The seat is set even lower than before, dropping the center of gravity (for better handling) but increasing the agility needed to climb in or out. Limited headroom and legroom mean NBA players need not apply, so the car isn’t going to suit everyone. 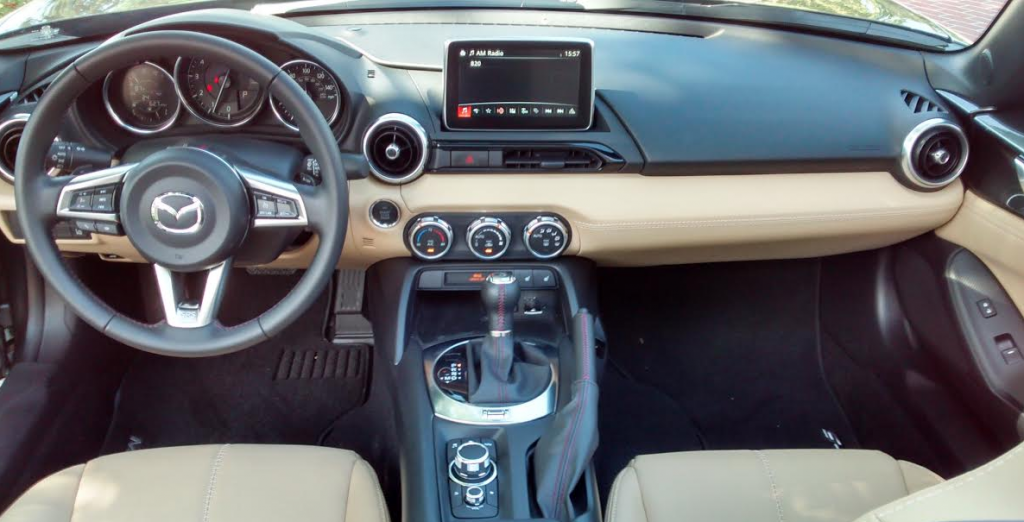 Visibility is quite good to the front and sides, but top up, it’s somewhat restricted to the rear corners. The standard rearview camera helps when backing, but it doesn’t “see” in a full 180-degree arc, so traffic coming down a parking-lot aisle can be hidden from view. Oddly, the miniature sun visors don’t rotate to the side to cover the side windows.

Unless the sports-car traditionalist in you demands two round gauges, an austere interior, limited equipment, and a conservative look, you’ll probably like the new Miata even better than the old.