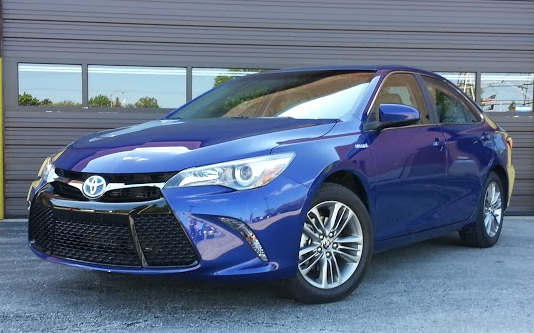 The not so good: Trunk space, some hybrid “quirks”

Say that you find yourself 500 miles away from someplace you’d rather be, and you have a 2015 Toyota Camry Hybrid at your disposal. Contrary to the line in the old joke, you can get there from here.

One of the beauties of Toyota’s updated intermediate that Consumer Guide® experienced while testing a gas/electric hybrid version was its great driving range. For instance, in 5 days with the car, including the Memorial Day holiday weekend, this driver made 2 round trips between work and home, ran a number of errands, and went to the Indianapolis 500 from Chicago, but didn’t fill up until the morning that he had to hand the car off to another driver. That was at the end of a 484.5-mile stint, and the Camry Hybrid still had more to give. According to the fuel gauge, the 17-gallon gas tank was a little more than three-quarters depleted; according to the vehicle-information display, the car had another 92 miles of range left in it. 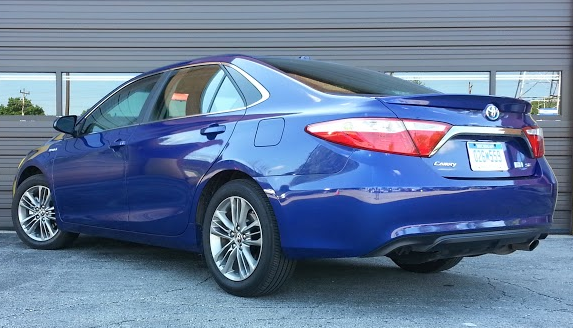 With an EPA rating of 40 mpg city/38 mpg highway and a 17-gallon fuel tank, the Camry Hybrid should be able to go more than 600 miles between fill-ups.

The car that came CG’s way was in SE trim, which sits in the middle of three available Camry Hybrids, between the cheaper LE and costlier XLE. At $27,995 to start, it runs $4155 more than a non-hybrid Camry SE—the greatest disparity between any of the Camry Hybrids and their gas-engine-only counterparts. That premium isn’t solely due to the difference in powertrains. The Hybrid has a few additional standard features, namely dual-zone air conditioning, Smart Key with push-button start, acoustic windshield glass, collision sensors that deactivate the high-voltage electric-motor battery, and regenerative braking to return charge to the battery.

That said, the Hybrid comes with some equipment trade-offs keyed to the specific needs of its engineering. Instead of the gas SE’s 60/40 split-folding rear seats, the Hybrid has just a small pass-through; “Optitron” instrumentation replaces the gas car’s tachometer with a hybrid-system power meter; and low-rolling-resistance tires take the place of conventional all-season rubber. Lacking the gas SE’s stepped 6-speed automatic transmission, the Hybrid does without paddle shifters on the steering column.

The Camry Hybrid pairs the 2.5-liter dohc 4-cylinder engine (rated at 178 horsepower in the gas car) with a battery-fed motor for 200 system net horsepower when they’re working together. The Hybrid’s power is channeled to the front wheels through a continuously variable transmission (CVT). As with any hybrid, the Camry starts silently in electric mode, and getting away from stoplights and the like soon passes the baton to the gas engine. This happens at a little under 20 mph, and while not perfectly seamless, it is not terribly disruptive. In highway driving, the Camry Hybrid has sufficient power for safe, comfortable cruising—even with 4 adults and a trunk full of cargo aboard—but getting to that point can be a bit of a challenge because the churning CVT lacks the rapid kick-down necessary for snappy passing.

In this driver’s turn with the car, just 31 percent of the distance covered was in city-style driving, which is the stronger suit for hybrids, and the car was driven almost exclusively in “normal” mode (electric-oriented “EV” and lower-power “Eco” modes can be selected). Still, at 39.40 mpg, his mileage bested the EPA highway estimate of 38 mpg, and nearly hit the city and combined estimates, both pegged at 40 mpg.

Steering was on the light side but still fairly responsive, and ride was smooth with pretty good bump absorption—though the tires made a little noise on the highway. Less pleasing was the braking, which required a lot of pedal pressure before the binders would take a good hold.

With few exceptions, the rest of the driving experience is pretty much the same as in most other Camrys. SE-grade seats clad in a textured cloth and “SofTex” imitation leather provide good support and long-drive comfort. Soft-touch surfaces cover the tops of the dash, doors and arm rests, but there’s still much molded plastic around the cabin. Our test car had an attractive black-and-light-gray interior with some dashes of bright metal for a bit of sparkle. Head and leg room are generous front and back. Three adults could fit shoulder-to-shoulder in back, thanks in part to one of the flattest floor humps you’ll find in a sedan. Visibility is pretty good to all directions.

Incidentals storage starts with a small covered space under the instrument panel with digital-device and power plug-ins, two open cup holders, and a decently sized cubby under the arm rest. An optional wireless phone charger can also be found in the console. The spacious glove box is wide. All doors have modest storage pockets with bottle holders. Rear passengers can take advantage of pouches on the backs of the front seats, cup holders in the pull-down center arm rest, and a small tray carved out of the back of the center console. 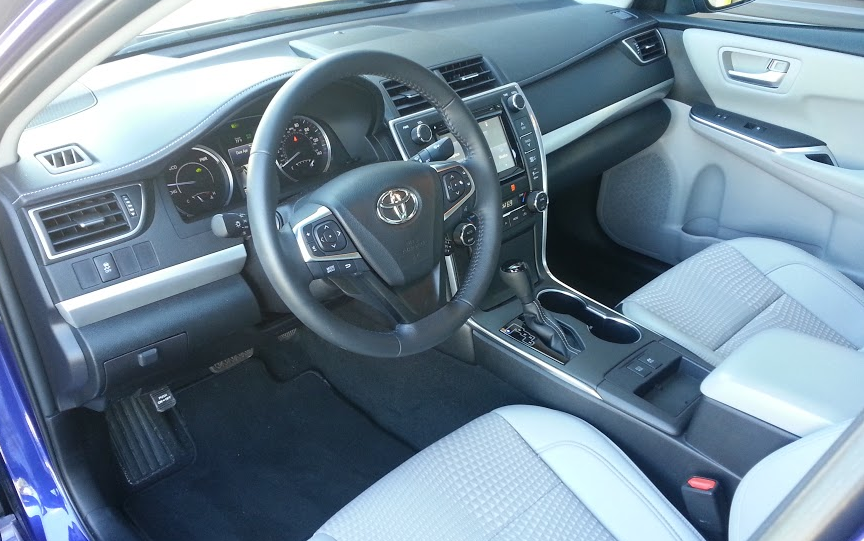 Material selection was only about average for the class, but the Camry Hybrid’s interior drew praise for its two-tone color scheme, straightforward control layout, and ample storage space.

Trunk loading is easy thanks to the shape and height of the opening, and the floor is wide and flat. The electric-motor battery pack is housed just behind the rear seat, where it trims 2.3 cubic feet of trunk space and deletes the regular Camry’s split-folding rear seat back, leaving just a small pass-through. However, on the Indy trip there was plenty of room for coolers, backpacks, and whatever else 4 race fans could think they’d need.

The Camry Hybrid SE that CG sampled came to $32,233 delivered. Aside from key standard equipment like 17-inch alloy wheels, black-trim projector-beam headlights, decklid spoiler, heated exterior mirrors, a leather-trimmed steering wheel, rearview camera, and thin-film-transistor vehicle-information display, the test car was amply optioned. Central to that was a $1300 package with navigation, Toyota Entune infotainment system with app suite, 7-inch touchscreen, upgraded audio system, voice recognition, hands-free phone capability, satellite radio, and traffic and weather alerts. Depending on whatever else buyers might deem necessary, they can go a long way in a Camry Hybrid while not spending 30-large.

Because auto manufacturers have concluded that hybrid buyers want their cars to drive like normal cars, they endeavor to make the “hybridness” as transparent as possible — except, of course, at the gas pump. Toyota is generally as good as anyone at accomplishing this feat, but there are some quirks about the Camry Hybrid that might raise some eyebrows.

In normal driving, the car moves off from a stop in electric mode, generally turning on the gas engine once you’re at a running pace; the deeper you dip into the throttle, the earlier the gas engine kicks in. And as John mentioned, that transition is fairly subtle. But floor the throttle from a stop, and there’s a momentary hesitation before both power sources chime in to provide quite adequate — though not what I’d call “strong” — acceleration. John mentioned that hitting the gas from speed resulted in a delay before the transmission kicked down for more power, but conversely, I thought the Camry responded rather quickly, though certainly not strongly at first. The trick here is that the transmission doesn’t really “kick down” sharply in the conventional sense; it kind of “slurs down,” which isn’t what most drivers are used to.

At the first stop sign, hitting the brakes widened my eyes a bit. In a hybrid, slowing the car’s momentum as it comes to a stop recharges the battery — something that’s referred to as “regenerative braking.” That happens not only when you lift off the gas, but also when you apply the brake pedal. In fact, a light touch on the pedal doesn’t physically apply the brakes; it just increases the regeneration to slow the car a bit faster. (Which is primarily why a hybrid’s brakes tend to last longer.) However, the Camry Hybrid didn’t seem to slow down in proportion to how much I was moving the pedal, and that left me approaching the sign more quickly than I had planned, and then having to push harder on the pedal. It’s just something that takes getting used to.

So does the noise. It’s not that the Camry Hybrid is noisy; it’s just a different kind of noise. Kind of … whirry. Also, since the gas engine shuts off when you come to a stop, there might be a moment of panic thinking that the engine died. It didn’t — at least, not unintentionally. 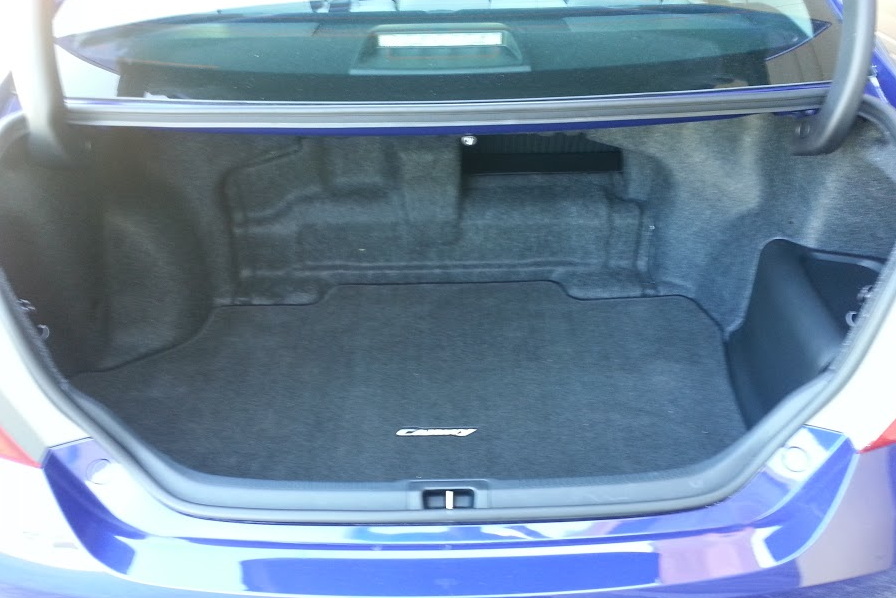 One “cost” for higher fuel economy is a reduction in trunk space and utility. The hybrid battery sits at the forward end of the trunk, reducing volume by 2.3 cubic feet and leaving just a small, shoebox-sized pass-through when the right-side seat back is folded.

The last sacrifice of note is in trunk space; not only the loss in volume, but more significantly to me, the loss of the split-folding rear seat back that’s exchanged for a shoebox-sized pass-through that’s six inches above the floor on the right side. Also, the trunk lid hinges dip down into the load space and the floor has an odd shape that cuts available space even more.

In most cases, the litmus test for hybrids is how long it takes fuel savings to pay back the higher initial cost. That’s particularly in question with the recent fluctuation in gas prices. With the “regular” 4-cylinder Camry rated at 25 city/35 highway (vs. 40/38 for the Hybrid), the EPA estimates you’ll only save about $200 per year with the Hybrid. That’s a lot of pay-back time. But particularly if you do mostly city driving (where the Hybrid shows far more benefit) and can appreciate the significantly longer driving range, the Camry Hybrid is a fairly painless way to “Go Green.”