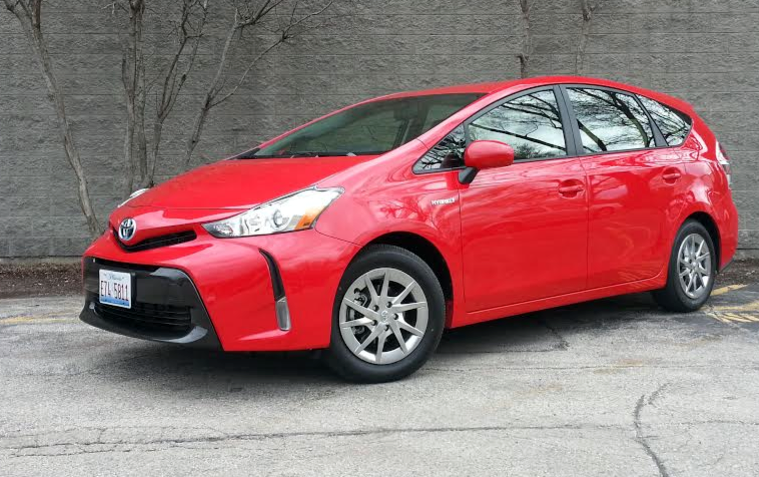 The not so good: Uninspired cabin decor

If Abbott and Costello were alive today, they’d probably be doing ads for the Toyota Prius.

“No, this v is a Four. The fancier one over there with the bigger wheels is a Five.”

“No, the v Two is the plain one in the corner.”

“Well, what kind of engine does it have, Bud?”

“No, it’s an inline 4 to go with a hybrid electric motor—same as the v Two, v Three, and v Five.”

“So what kind of gas engine does the v Five have?” 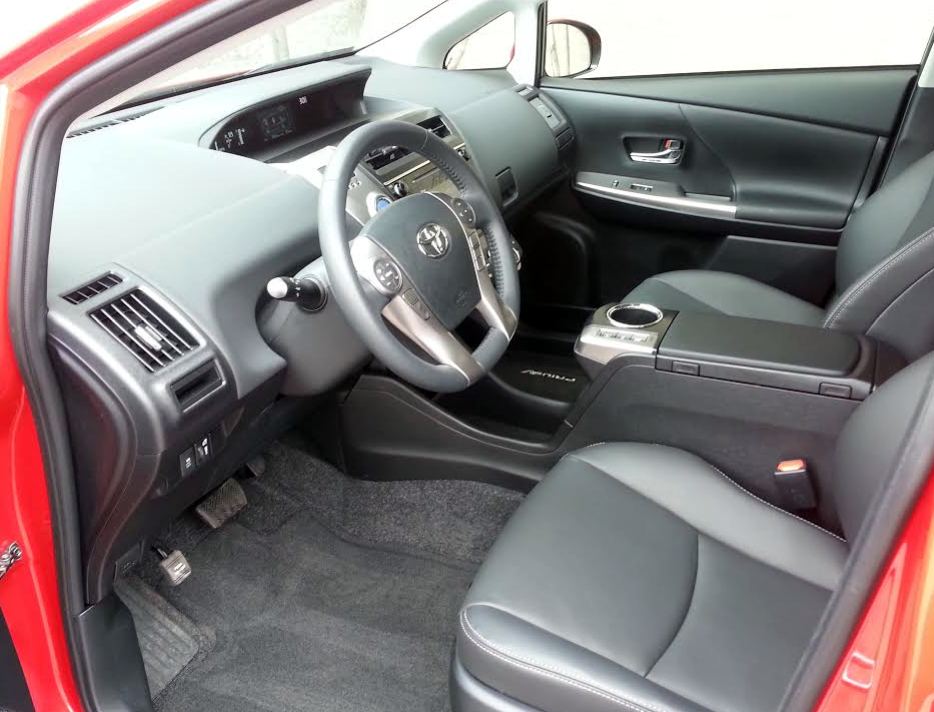 The Prius v cabin is spacious, but materials quality falls something below midpack in the midsize-car segment.

Just so there’s no confusion, the v is the big-daddy of all the hybrid Priuses, a wagon large enough to qualify as a midsize car—and a Consumer Guide® “Best Buy” at that. The Four is one of a quartet of Prius v trim levels, ranging from Two up to Five, and the one that CG editors recently drove in the v’s spiffed-up 2015 form. The powerplant—at least the gasoline-burning portion of it—is a 1.8-liter dohc 4-cylinder.

Now that all of that is cleared up, it’s time to point out that the Prius v is a roomy and economical-to-run alternative to the sedans that predominate in the extensive midsize class. There’s excellent rear-seat leg room, and the very real possibility of getting three adults to fit comfortably—for a while at least—across the rear seat. Oh, and how does 49.54-mpg fuel economy sound? That’s what this tester averaged at the end of a 161-mile stint that consisted of 3 days of urban home-and-work commuting. The downsides are mundane performance, a somewhat noisy highway ride, and cabin appointments that are less plush than the car’s price might suggest.

The Prius v uses the same gas/electric hybrid powerplant as the compact Prius hatchback; in both, the gas engine generates just 98 horsepower but total available system output is 134 horsepower. They also share a weight-saving continuously variable transmission (CVT). What they don’t share is a footprint. The v has a 3-inch longer wheelbase, is 5 inches longer overall, and weighs about 250 pounds more. Thus, the wagon’s EPA mileage ratings—44 mpg city/40 mpg highway/42 mpg combined—aren’t as good as those of the hatchback. Still, as demonstrated by this driver’s experience (which came with 70 percent city-style driving, where hybrids do their best work), the v can overachieve.

Aside from the base drive setting, “Econ,” “Sport,” and “EV” modes can be selected from a row of pushbuttons on the center console. Econ and Sport make perceptible changes in the car’s level of willingness to accelerate, feeling a bit freer and more eager in Sport for acceptable expressway driving. No Prius is a hot rod, however, and trying to see just how close it comes to that elicits a grumpy roar. 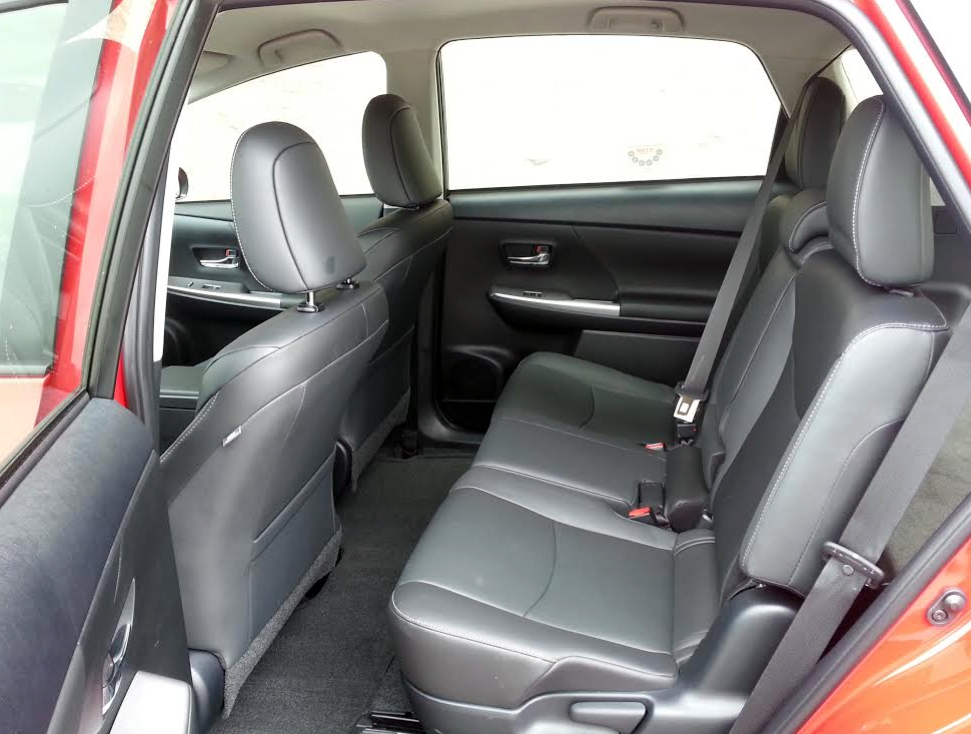 There’s plenty of space for average-sized adults in the Prius v’s second row, thanks in part to the flat floor.

Ride benefits from the additional wheelbase, but it’s not marshmallow soft, and the 205/60R16 tires sing out a bit at highway speeds. Steering is easy but somewhat short on communication back to the driver.

The central portion of the dash has fairly spongy soft material through its center, but door tops and the rest of the dash are less flexible. A number of silver accent sections on the centered control stack (nothing is directly ahead of the driver) and steering wheel relieved the overall darkness of CG’s test car. Audio and climate controls are easy to reach and master but seat-heater buttons and a power point are much harder to access down near the floor. Visibility is quite good except at the far rear corners, where the bodywork rises and the windows narrow. Straight-back visibility is much better than in the slope-deck Prius hatchback. 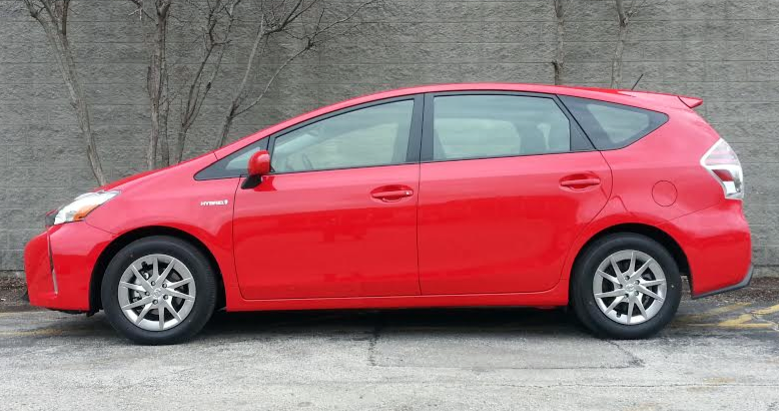 Like a number of other hybrid models, the Prius v boasts a city EPA estimate that’s greater than its highway figure.

Interior storage benefits from a bilevel glove box and fairly roomy console box. There’s a single open cup holder at the front of the console, and another pulls out from underneath. Front door pockets are small but incorporate a bottle holder; rear pockets essentially are bottle holders. There are pouches on the backs of each front seat, and twin cup holders pop out from the back of the console. The flat-floored cargo hold is quite big—and nearly cavernous when the rear seats are folded down (though they expose a gap between the cargo floor and seats). Cargo-area amenities include 4 tie-down hooks, a light built into the left side, and a power point in the right sidewall. Underfloor compartments can accommodate additional small items and include a tray to hold the roll-up cargo-compartment cover when not in use.

The Prius v Four starts at $29,695—impressive, unless you find the somewhat bland cabin and the tame performance (the trade-off for high mileage) a bring-down. The CG tester cracked $30,000 with a floor-mat/cargo-mat option and delivery. However, to get certain safety technologies (like adaptive cruise control) or comforts (like a panoramic moonroof) requires stepping up to the Five model, and even then these items may be available only in option packages.

Aside from its phenomenal fuel economy (I beat the EPA combined rating by more than 4 mpg), the Prius v stands out for its space utilization – particularly when compared to other hybrids. Most hybrid sedans lose not only trunk space but also the ability to fold down one or both of the rear seat backs due to the battery being placed upright against the rear of the cargo area. Not so the Prius V, which not only provides a huge, cubic cargo area and flat-folding rear seat backs, but also two substantial bins under the cargo floor, one of which can accommodate the extendable cargo cover when not in use. Interior storage is equally impressive, highlighted by upper and lower gloveboxes, a large forward console bin, and a sizeable two-tiered console box (the last two allowed in part by the handy dash-mounted shift lever). 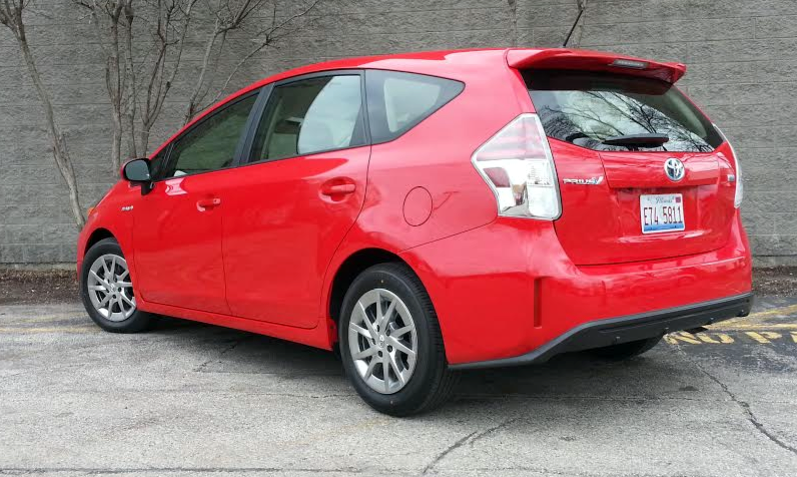 There’s a widely held belief that only Volkswagen diesels and Toyota Prii (that’s the actual plural of Prius) beat their EPA numbers. Our test v lived up to the legend.

While dynamics aren’t really sporty, the Prius v is nonetheless satisfying enough to drive, in part due to a great driving position: high and commanding with fine front and side visibility. (By contrast, the rear corners are pretty much blind, though a wide-angle rearview camera helps when backing). Those in the rear seat will find ample headroom and legroom (the former despite an unusually high-mounted seat cushion), and the flat floor allows more foot room for anyone stuck in the middle.

So while fuel economy might be what draws people to any Prius, those choosing the v will be treated to an unusually roomy and accommodating vehicle as well. There’s a reason we’ve chosen the Prius family as our Editors’ Choice Best Buy for two years running, and this particular member might be the best of the bunch.