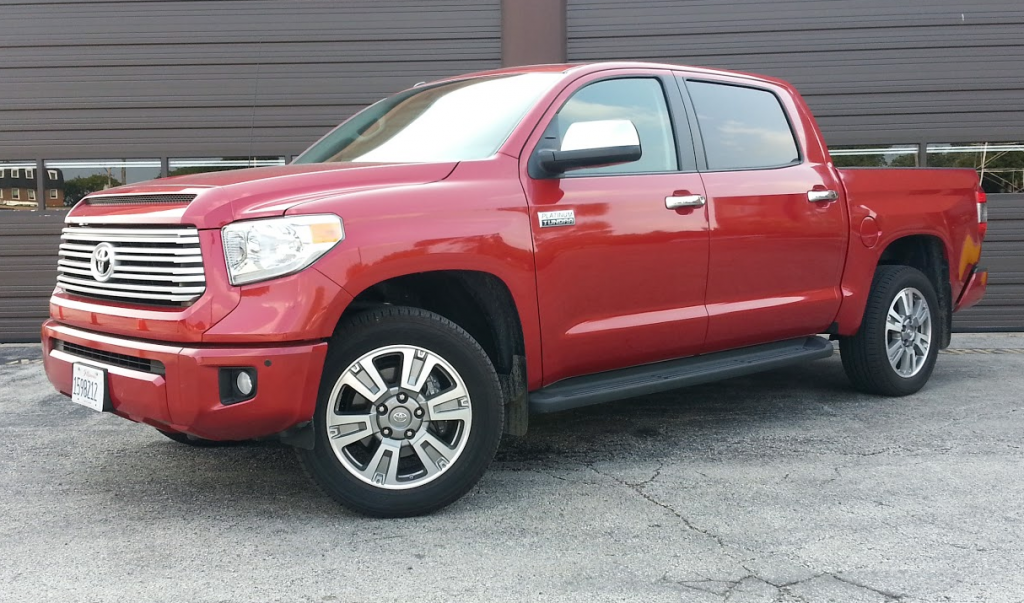 The not so good: Very thirsty, “premium” cabin trim trails that of competition’s highline models

The world, it seems, is going gaga for premium pickup trucks—if by “the world” we mean those Americans who want a full-size truck that’s anything more than a Refrigerator White utilitarian commercial vehicle. In recent years, there’s been a fairly steady stream of pickups pushing the luxury—and price—bar higher, and the $50,000-plus truck is getting increasingly easier to find. 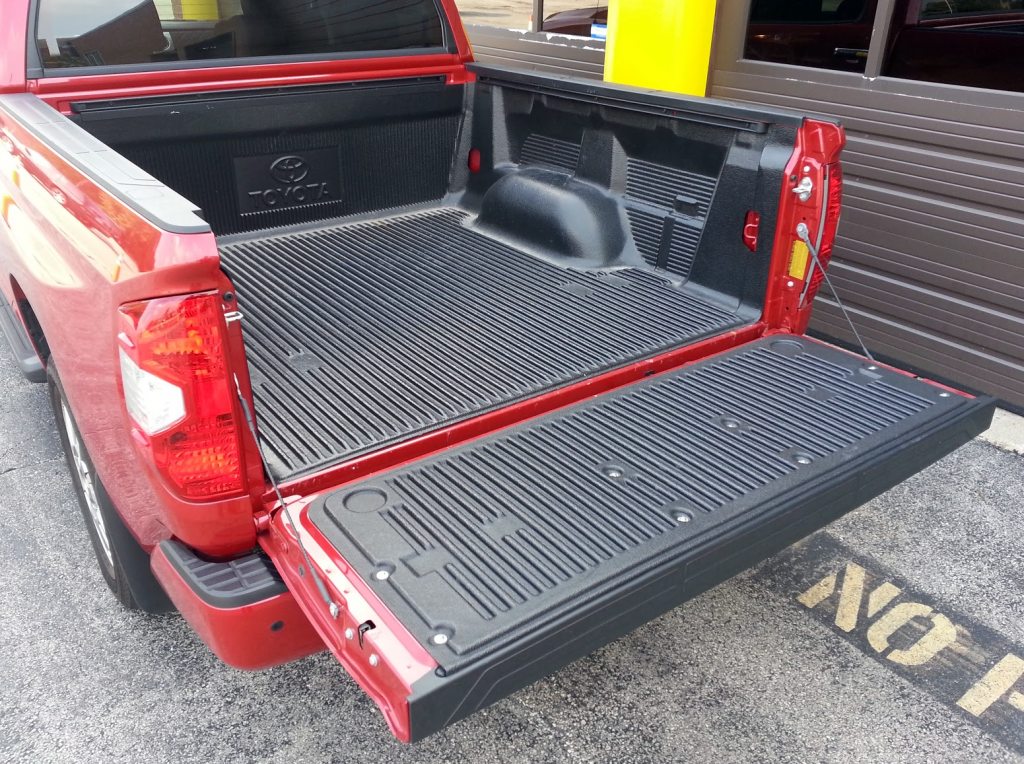 Depending on how it’s equipped, Tundra Crewmax is rated for 1525 to 1665 pounds of payload capacity.

Perhaps just to make sure it has left no stone in this field unturned, Toyota has two Tundra models in the class, the 1794 and the Platinum. At the same $47,975 starting price, they offer prospective customers a choice of interior ambience—the “western-themed” brown-leather-and-faux-wood look of the 1794 or the “urban-themed” diamond-tufted black leather of the Platinum. Front designs are different, too: chrome grille surround and bumper end caps on the 1794, and body-color elements on the Platinum. 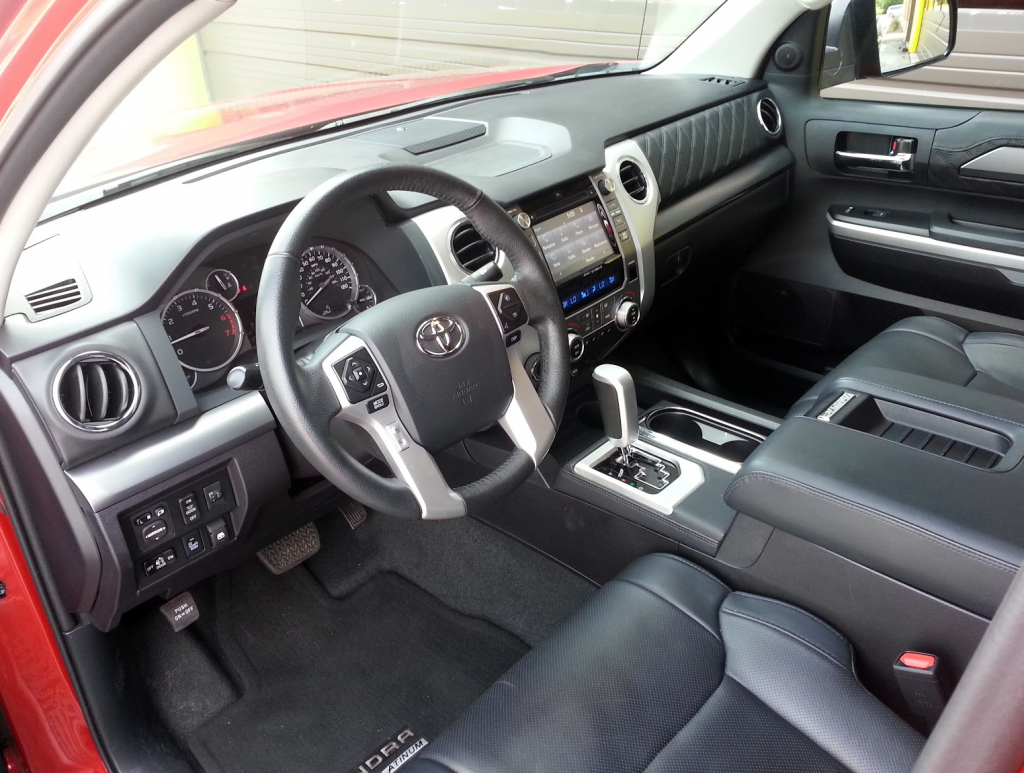 Otherwise, they have the same premium equipment including LED daytime running lights, 20-inch 6-spoke alloy wheels, power moonroof, front and rear parking-assist sonar, heated and ventilated front seats, and Toyota Entune infotainment system incorporating JBL audio with navigation and app suite. Both are available only as a full 4-door Crewmax cab with a 5.5-foot-long cargo bed. Underhood is the larger of the 2 available Tundra V8s, a 381-horsepower 5.7-liter powerplant hooked to a 6-speed automatic transmission. Drive comes in a choice of rear-wheel or part-time 4-wheel drive.

Still, the high-end Toyotas are not the most sybaritic big pickups available. Soft-touch areas of the interior are somewhat limited, with grained hard plastic on much of the instrument panel and the tops of the doors—the latter a common passenger-contact area. At least they’re not the priciest, though. With delivery and a quartet of options ranging from $65 to $500, the 2015 Platinum 4×4 that Consumer Guide® tested bottom-lined at $50,250. There are some competitors that are just getting warmed up at that price.

Mustering 401 lb-ft of torque, the 5.7 V8 provides strong off-the-line pull, yet still possesses the capability to cruise easily on the highway. Get ready to pull off that highway frequently for fuel, however. After 60.3 test miles (66 percent of them in city-type driving), this driver averaged just 13.84 mpg—only a little better than he did during a slightly longer wintertime run in a 2014 Tundra 1794. EPA estimates for the 5.7/6-speed powerteam are 13 mpg in the city, 17 on the highway, and 15 combined. Note that a “flex-fuel” version of this engine that can run on E85-blended gasoline is available.

Tundra: The Overlooked Truck That Shouldn’t Be

Fitted with rear leaf springs, ride is fairly well composed, even without a load in back. Steering and handling are so-so, but it is a truck after all.

Included on Platinum models is this tufted-leather seatback treatment.

There’s abundant passenger room in every direction. Three burly types will fit in back easily because the seat is wide and the driveline hump is low and flat. Over-the-shoulder visibility is uncluttered; even though the Tundra filled the driveway that abuts this tester’s house, backing out was a cinch thanks to the big windows. Controls are easy to reach and use.

Interior storage is king-sized, starting with the ample, segmented glove box. The deep, wide console box can be outfitted with an optional movable tray. Massive door pockets extend the full length of all four portals, and there’s good news for thirsty folks: Each pocket has holders for 2 bottles. Rear-seat accommodations include pouches on the backs of the front seats and a pull-down center arm rest with two cup holders. Rear-seat cushions flip up to expose storage space that would rival some subcompact-car trunks for floor area.

Step-in is pretty high, so built-in grab handles and optional running boards help there. The tailgate is designed to ease itself down in the last couple of inches of travel; this feature may not be up to 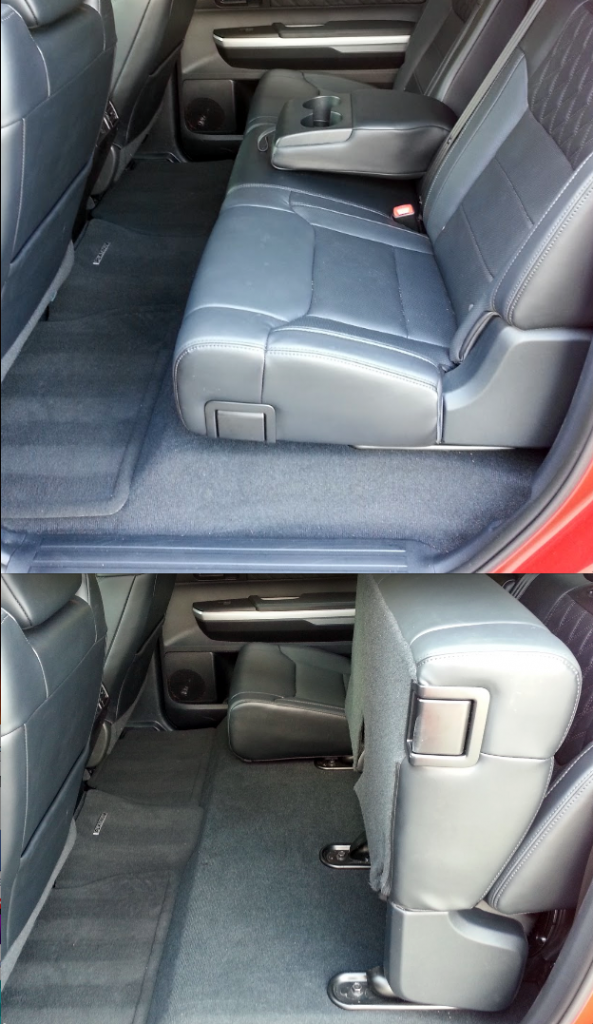 One thing that this driver was dismayed to see was the same old hard-to-use, ineffective tire-changing tools that let him down on a CG test Tundra one otherwise-beautiful summer night 15 years ago are still being packed in today’s trucks. Seriously, fellows?