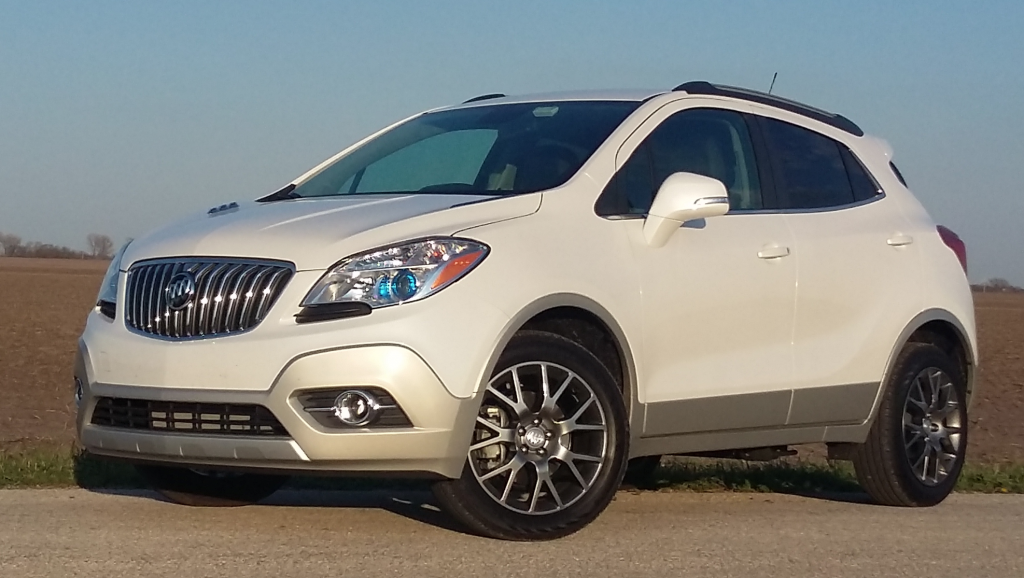 The new-for-2016 Sport Touring is the only Buick Encore to get a new 153-horsepower 1.4-liter turbocharged engine; other models make do with 138 horsepower. Our test vehicle listed for $31,265 including destination and a couple of options.

The not so good: Non-linear throttle response, mediocre rear-seat room and cargo space 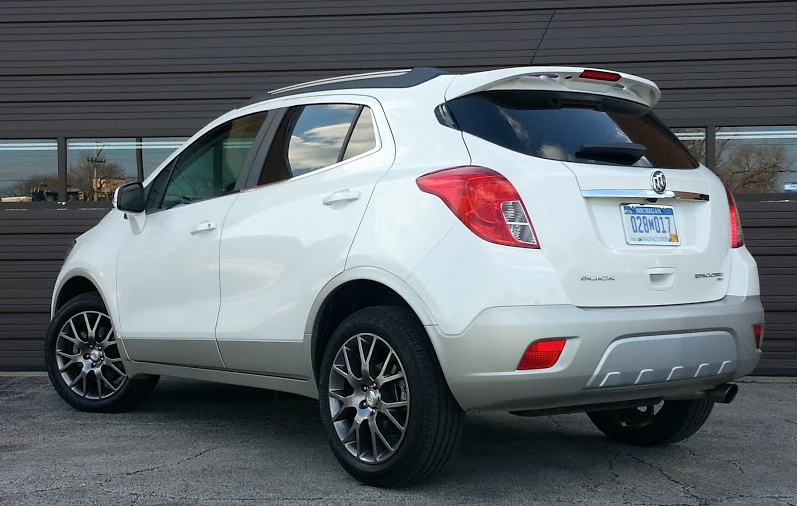 Visibility is good except to the rear corners, due to thick roof pillars.

Oddly enough, Buick was an “early adopter” in the subcompact-SUV game, having introduced the Encore for 2013. Since then – and even more oddly – this most un-Buick-like of Buicks has become the make’s biggest seller.

Encore grew out of a design already on sale elsewhere around the globe, so it was hardly a big risk. But it’s paid off handsomely for Buick, likely due to the fact that it’s an anomaly in its segment, being the only entry focused on luxury. As such, it offers nicer appointments along with several features that are either unusual in the class (such as front-passenger lumbar adjustment) or unique (a memory driver seat).

New for 2016 is the Sport Touring model, which ups the horsepower ante from a rather meager 138 in other models to a slightly more robust 153, both figures courtesy of a 1.4-liter turbocharged four – though the Sport Touring’s is a completely different, “next-generation” engine. While the extra 15 horsepower (and 29 lb. ft. of torque) might not be readily noticeable to the “seat of the pants,” it was to our digital accelerometer: Whereas typical 0-60 times are in the mid 9-second range for the 138-horsepower version, our times averaged about a half-second quicker. With either engine, stabbing the throttle from a stop results in a rather “gentlemanly” takeoff, but things pick up after about 20 feet. That puts acceleration as adequate if not exactly exciting, and the 6-speed automatic transmission  downshifts fairly quickly for more passing power. Notable is that both engines tend to have somewhat non-linear power delivery, though it’s mostly evident when hurrying. The Sport Touring comes with stop/start technology, which shuts the engine off at stoplights and then restarts it when your foot is lifted off the brake. It worked fairly unobtrusively, and – in conjunction with some high-tech engine features such as direct fuel injection – to indeed aid fuel economy: the EPA ratings for the 153-horsepower engine (28 city/34 highway with front-wheel drive, 26/32 with AWD), are 3-mpg better in the city and 1-2 mpg better on the highway than for the 138-horsepower version. 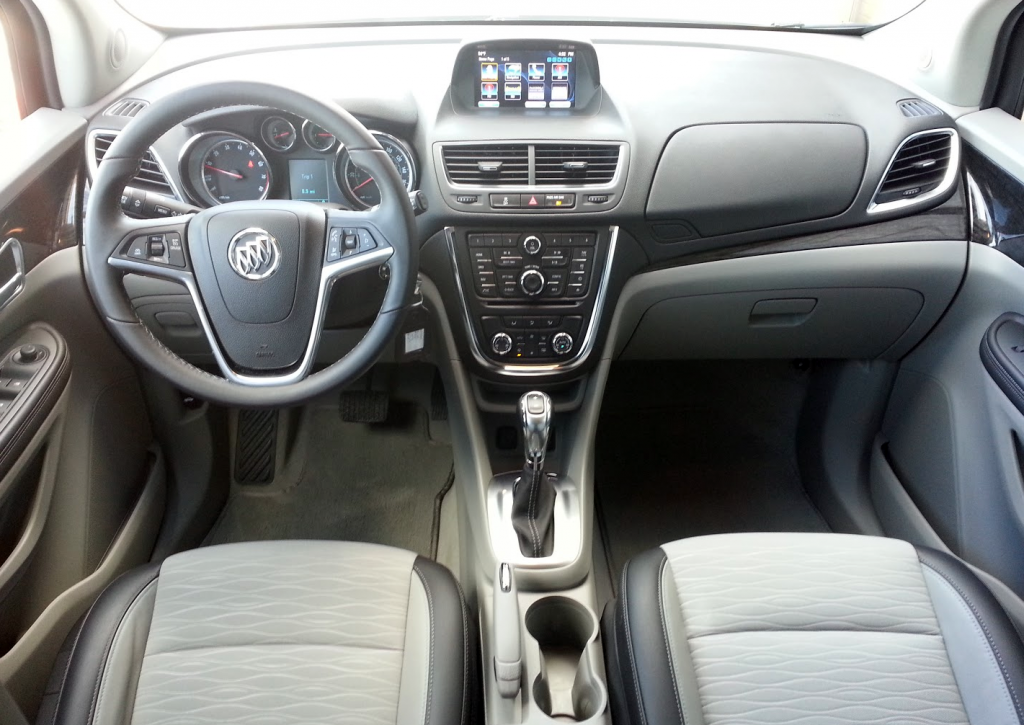 Encore is dressier inside than most other subcompact SUVs, and its “old school” controls are refreshingly simple to use.

Although the Sport Touring is supposed to be a sportier model, it wears the same 18-inch wheels (though in a different style) as its line mates. Since the suspension is also the same, ride and handling are, too. That means our tester rode with a fair degree of compliance over bumps –particularly for such a small SUV – while exhibiting nimble if hardly sporting handling.

Visibility is decent to the front and sides, poor to the rear corners, though the view straight back is aided by rear-seat headrests that can be lowered to overlap the seats. There’s a standard rearview camera, but it only displays a 140-degree view (rather than the better 180-degree of some cameras) on the fairly large, protruding dashtop screen.

One of Encore’s greatest strengths is that it’s awash with interior storage spaces, though none are particularly large. There are upper and lower gloveboxes, small covered console box (which doesn’t have an armrest, though one flips down from the side of the driver’s seat), two cupholders, a small dash bin, decent-sized forward console bin with Aux/USB/12-volt plugs, left-side drop-down dash bin, mid-door bins, and map pockets in the lower doors. 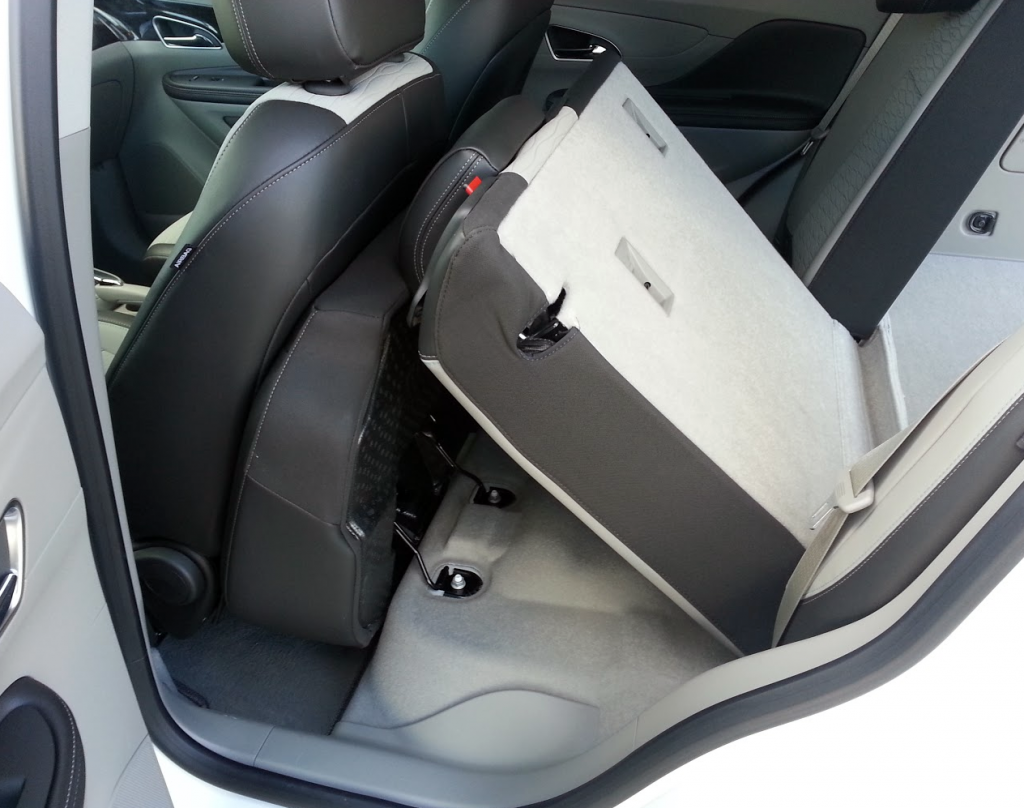 If the front seat is set all the way back, the rear-seat cushion can’t be flipped forward enough to allow the seat back to lie flat.

There’s padding on the dash and door tops – the latter not being the norm in this class – and our tester’s dark wood trim was set off with matte silver accents for an understated but upscale look.

Audio and climate controls are – by today’s yardstick, at least – quite easy to decipher and use. The radio has volume and tuning knobs, six station buttons, and other buttons for audio source and navigation, as the 6-inch dash screen isn’t a touchscreen. Climate controls consist of a rotary temperature dial, repetitive-step fan speed buttons, and individual mode buttons.

Passenger and cargo space are the usual concerns with subcompact SUVs, and the Encore illustrates why. While there’s decent headroom and legroom both front and rear for average-size folks, taller drivers may want for more legroom, and with either front seat far back, legroom behind it almost disappears. Also, the rear door opening is rather small, which hinders egress a bit, though step-in height is about right. This is an example where taller buyers might want to look at one of the roomier subcompacts (like the Honda HR-V) or a compact.

Cargo room is likewise limited, though quite versatile. The cargo area is narrow at the rear and there’s not a lot of space behind the rear seat, though there is some under the floor. Though each side of the rear seat back can be folded, the cushion has to be flipped forward first – meaning it’s a bit of an awkward two-step process – and it can’t be flipped if the front seat ahead of it is far back. And while the front-passenger seat back folds forward to create a long load area – a handy touch – the flipped rear-seat cushions stick up about five inches, meaning you can’t just slide long items forward. With the front and rear seat backs folded, I was just barely able to fit an 8-foot piece of lumber in diagonally, which is a nice bonus. 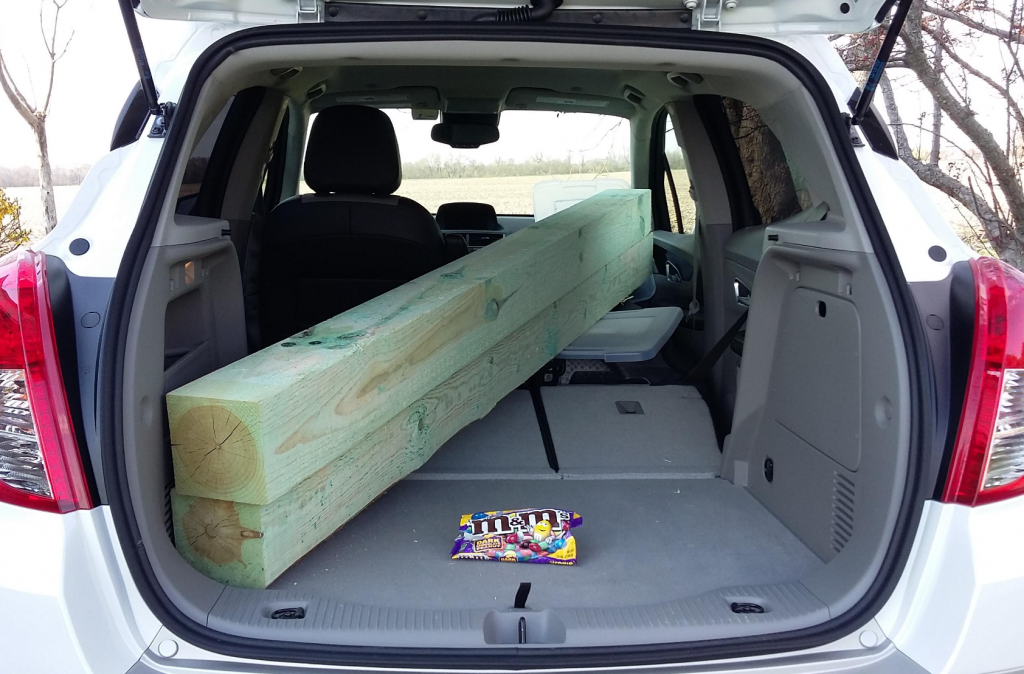 With the rear and front seat backs folded flat, 8-ft. lumber can be squeezed in diagonally — with plenty of room left for a bag of M&Ms.

As subcompact SUVs go, Encore starts at the high end of the price spectrum. But that’s offset with a higher degree of luxury features and equipment, making it an obvious choice for those who are “stepping down” from higher-end cars or larger SUVs.

Three years after its introduction, Buick’s trailblazing, genre-bending Encore remains something of an outlier among subcompact SUVs—a vehicle class it helped inaugurate. While other subcompact utes aim for a sporty, youth-oriented flair or all-terrain capability (i.e., the Jeep Renegade), the Encore stands alone in its attempt to meld traditional-luxury trimmings (understated colors, upscale cabin materials, a driving personality that focuses on quietness and smoothness) with a pint-sized SUV platform. In many ways, the Encore is a great success in that regard—it delivers surprisingly good ride quality and a decently quiet cabin for such a small-footprint vehicle, and the tall seating position and flexible cargo area are pluses for a wide variety of shoppers.

However, in some ways, the Encore’s upscale aspirations serve to highlight the shortcomings of its basic architecture. Even among its similarly small competitors, the Encore’s passenger cargo space and versatility aren’t quite up to par; with the front seat set all the way back (where I need to have it for my 6’6”-tall frame), the rear seats can’t be folded fully to create a flat load floor. Plus, the cabin is narrow enough that two large occupants will likely be sitting almost shoulder-to-shoulder in the front seat or back seat. Also, the lack of keyless entry/starting is an eyebrow-raising omission in a near-luxury vehicle in 2016, though the 2017 Encore is slated to add that feature as standard equipment. All in all, the 2016 Encore remains an unusual, compelling vehicle—if the benefits of its platform are more important to you than the inherent compromises. 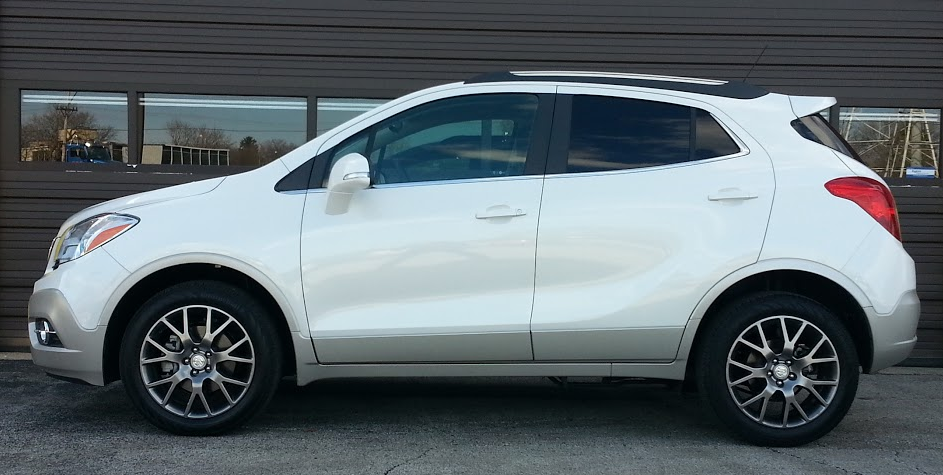 Buick’s Encore makes its mark in the subcompact SUV class with higher-end materials, lots of interior storage cubbies, and a versatile if not especially spacious cargo area.