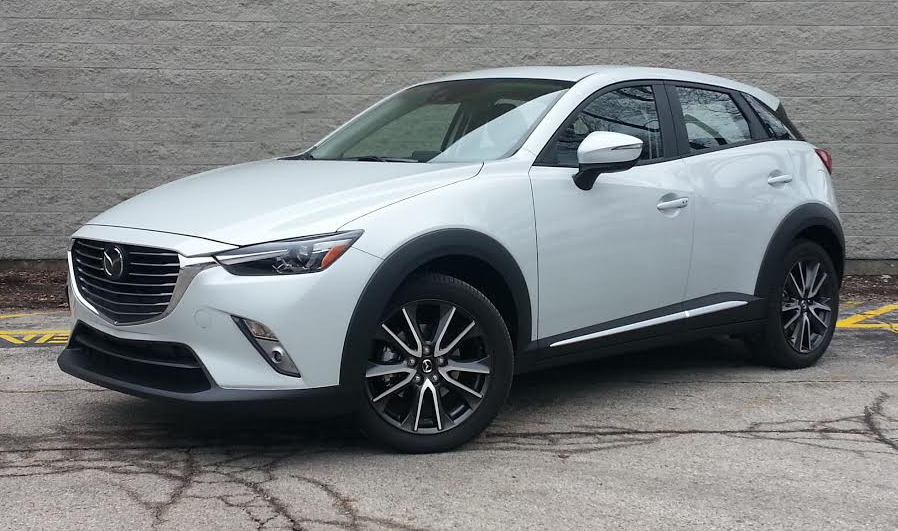 The not so good: Control layout, cargo room

At its core, the all-new Mazda CX-3 subcompact crossover SUV is a nice enough vehicle, with sportier looks and a bit more fun-to-drive character than some of its competitors. Those are reasons why the CX-3 is a Consumer Guide® “Best Buy” in this emerging class of vehicles. 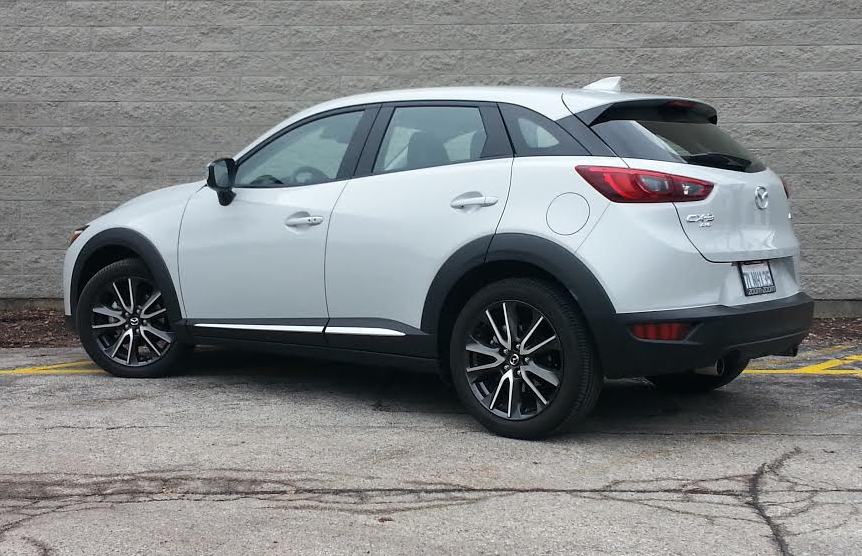 Not all CX-3s are born exactly equal, however. While they all share the same 146-horsepower 2.0-liter 4-cylinder engine and 6-speed automatic transmission, plus the same passenger-room and cargo dimensions, there is an ascending rank of equipment for the benefit of shoppers who think they can spring for more bling. Indeed, CG’s second test drive in a CX-3 came in a line-leading Grand Touring with all-wheel drive. 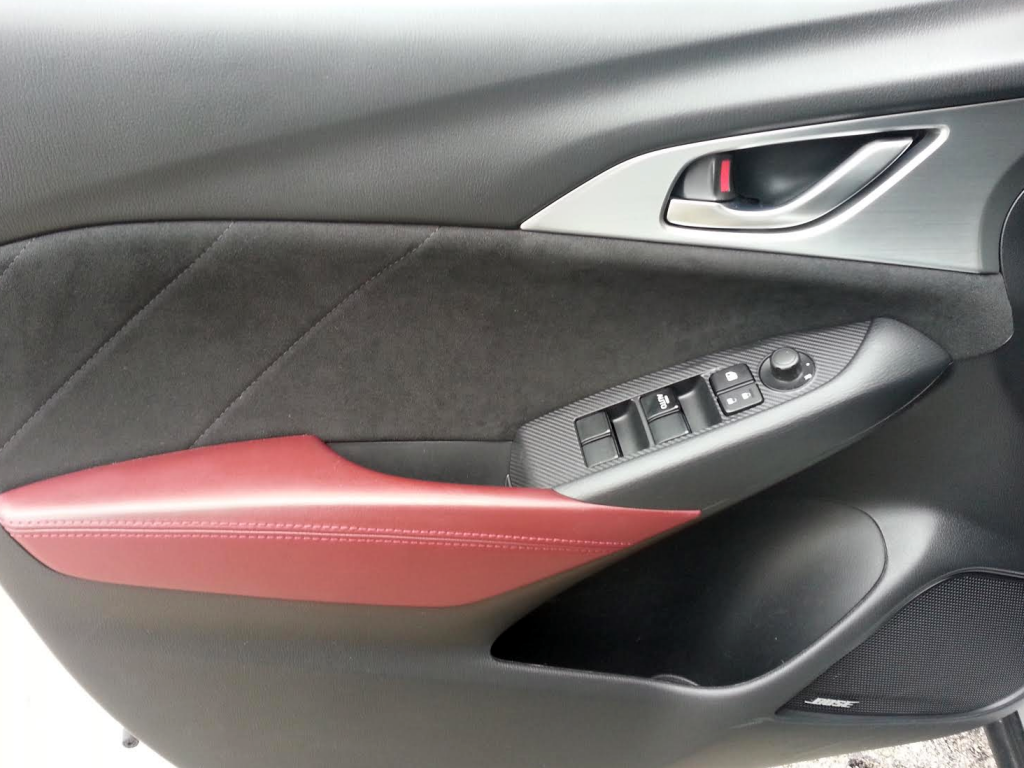 The dohc powerplant delivers a good amount of power just about all of the time—all the more when the transmission’s “Sport” mode is toggled on. In that case, there’s a freer flow of power and quicker response to throttle inputs. EPA fuel-economy ratings for the AWD CX-3 are 27 mpg city/32 mpg highway. This tester averaged 26.97 after covering 110.7 miles, 73 percent of them in city-style driving. That wasn’t quite as good as he got earlier from an AWD Touring (29.57 mpg) with slightly more highway miles. 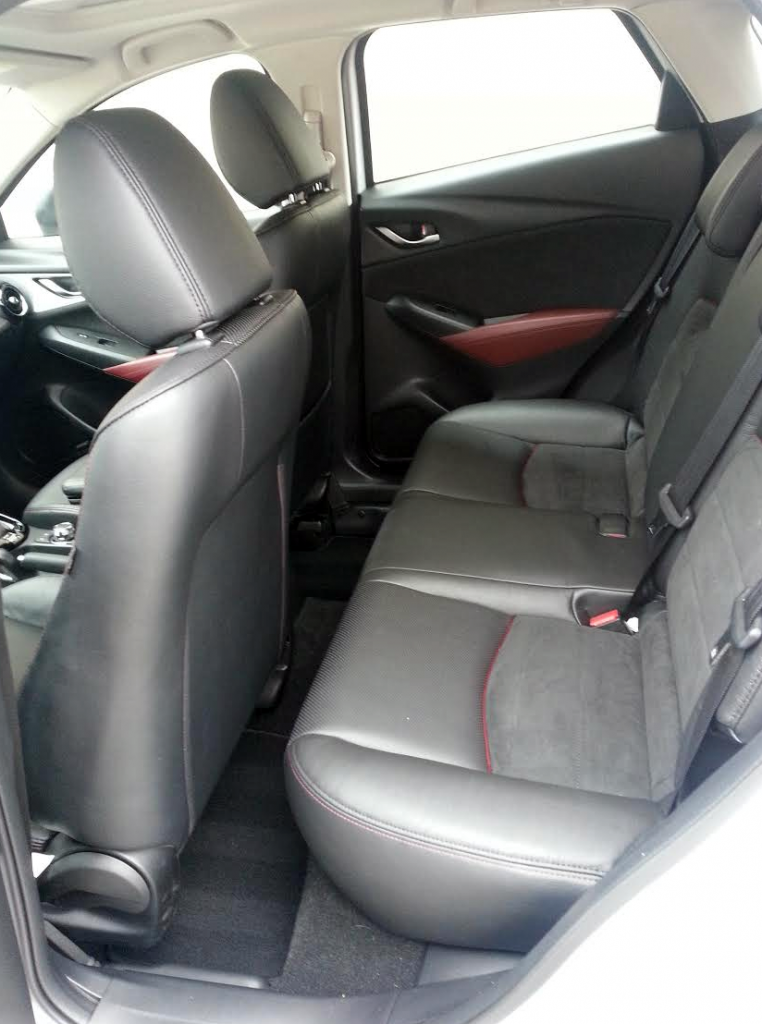 As in most vehicles in the subcompact crossover class, second-row space is limited, especially behind taller front-seat occupants.

Aside from the upgrade in seat coverings, interior ambience is similar throughout the CX-3 range. Even at the top of the line soft-touch material is generally confined to the tops of the door arm rests and adjoining areas in the center of each door—in this case the door material was the same suede found on the seats, and dark red arm rests and seat piping shot some color through the otherwise black ensemble. Being a new Mazda, the infotainment system in the CX-3 is subject to the console-dial Commander Control that has yet to win any brownie points from this driver.

As for personal-item storage, the glove box is usefully large, but it is accompanied by small front-door pockets with bottle holders, 2 open cup holders in the console (that are inaccessible when the arm rest is flipped down), and a small open bin under the dash that holds power and USB ports. The 2nd row has a single pouch on the back of the front passenger seat and a bottle holder in each door.

Passenger room is better in the front than it is in back, where 2 adults—or perhaps 3 kids—will be cramped if front-seaters test the limits of seat travel. If front-seaters don’t need to stretch out all the way, though, there’s the potential for comfortable adult leg room. Rear head room is not so ample under the sloping roof. Driver vision to the rear corners suffers a bit from this design, and rear-seat head rests restrict the view dead astern.

The rear cargo area is as subcompact as the rest of the vehicle, but the floor panel can be removed to add a few more inches of depth—or left in place to serve as a cover for flat items that owners might want to keep hidden. To expand cargo capacity, the rear seats fold almost flat, and with a smooth, undivided transition from the rear cargo floor.

CG’s Grand Touring test vehicle had a bottom-line price of $29,590 with delivery and options—mostly a $1920 package with electronic safety features only available at the GT level. Other things that shoppers might find worthwhile, like navigation or the moonroof, can be ordered further down the line. 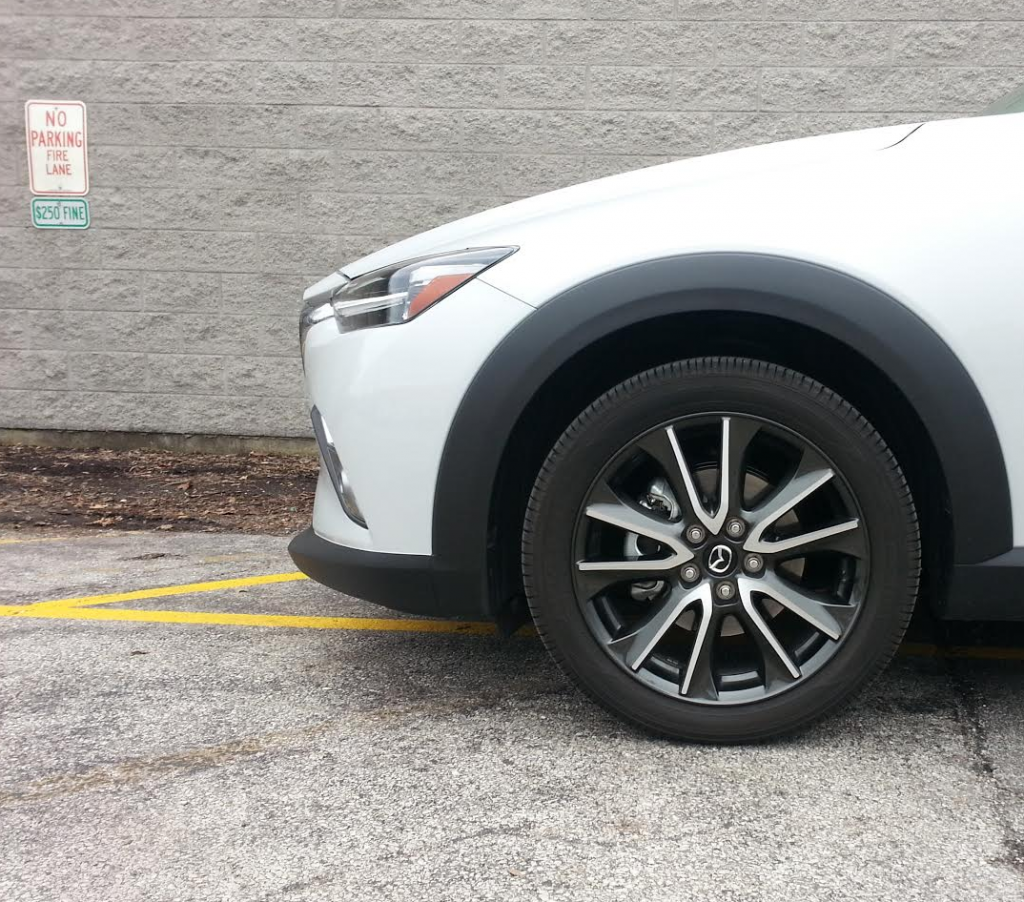 These 18-inch alloy wheels are standard on Grand Touring models.

Despite a temperature differential of as much as 80 degrees, our impressions of the CX-3 were uniformly positive. We’ve named the CX-3 a 2016 Consumer Guide Best Buy, and additional time with the little crossover served to underscore that decision.

The single performance metric that varied between the two test vehicles was fuel economy. Rick, in warmer Arizona saw 31.1 mpg, this in mostly highway driving.

With a bit more stop-and-go driving, and with temperatures hovering around freezing, our Chicago test vehicle eked out a still-impressive 27.7 mpg. It’s worth noting that both vehicles were equipped with AWD.

With its limited 2nd-row passenger space, the CX-3 is best suited for small families or individuals with little need to ferry more than one additional adult. That said, this smallest Mazda crossover is efficient, nicely finished, and fun to drive.