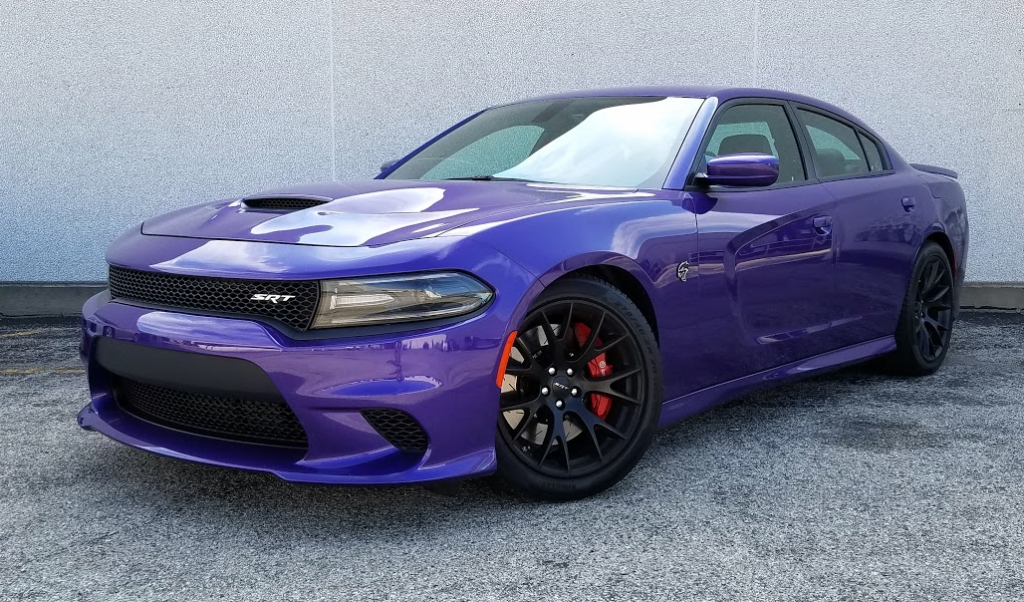 The good: Sporty handling, given the Charger’s size and heft

The name alone sounds nasty: Hellcat. The cars that it’s on certainly are.

There are two ways to get the 707-horsepower Hellcat treatment on a Dodge—as a two-door Challenger or a four-door Charger like the one that Consumer Guide® editors drove. Many four-door cars, especially in the large-car class in which the Charger resides, are fairly tame family conveyances. All that this sedan and sedate have in common are four letters. 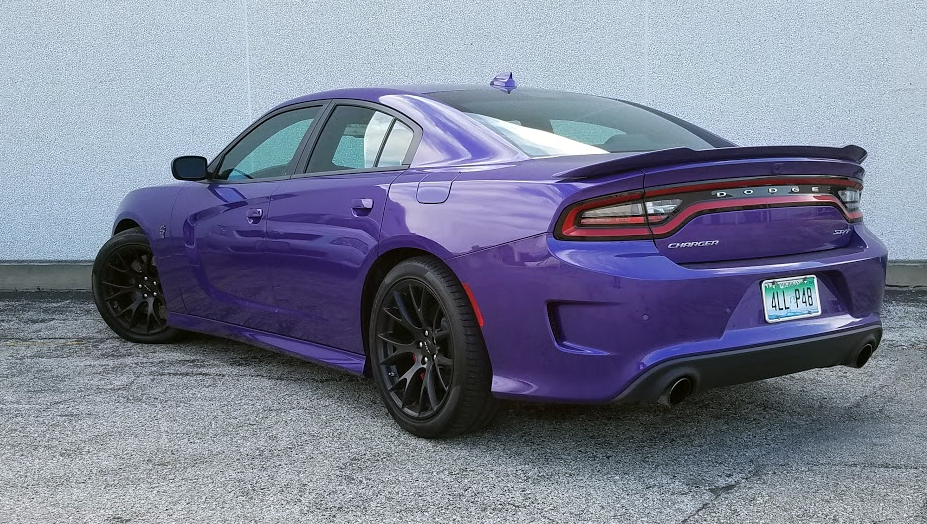 Our Charger Hellcat’s wild Plum Crazy finish is a close match to the original Mopar “High Impact” color from 1970.

Yes, the Hellcat is hairy, but it isn’t new. It made its debut in 2015, when the then-nine-year-old Charger came in for a substantial facelift, a redone interior, and enhanced tech features. Naturally, a street-legal sedan with racecar power figures and a projected top speed just beyond 200 mph—especially one based on a prosaic mass-production platform, not a purpose-built “super car”—is going to attract gobs of attention. As a publicity stunt, the Charger (and Challenger) Hellcat was a screaming success, drawing prodigious amounts of ink, air, and bytes from reviewers who drove it last year. 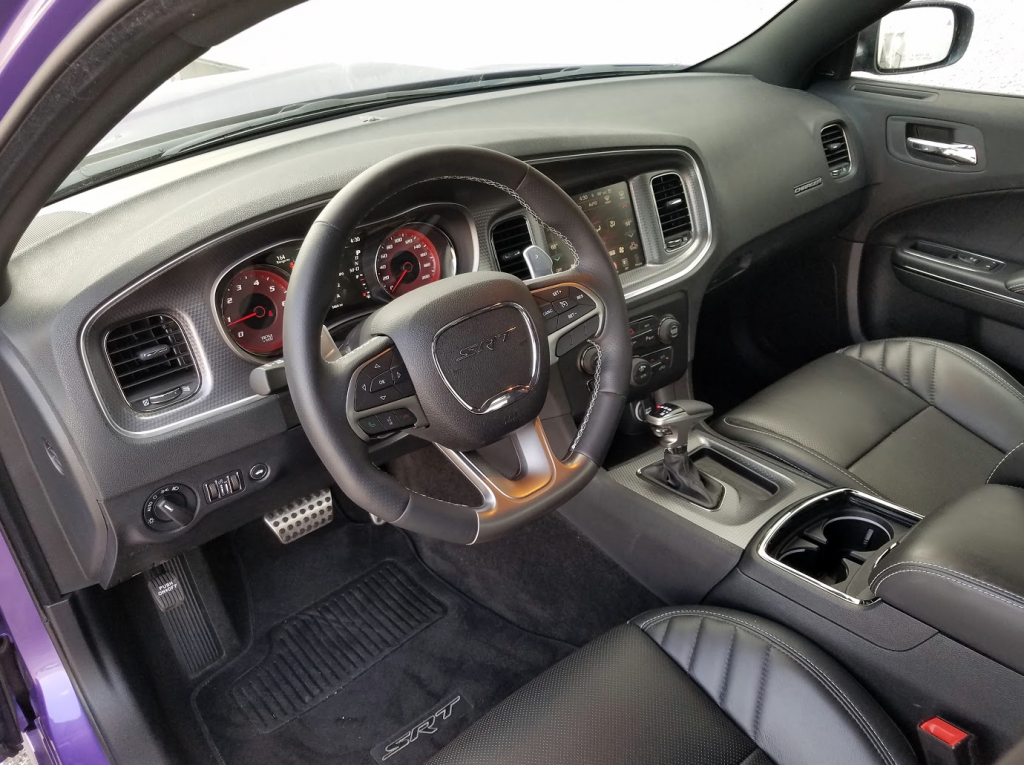 The Hellcat’s interior is more luxury sedan than bare-bones brawler… and it better be, considering that $71K price tag.

It’s hard to top that in year two, especially when specification changes to the Hellcat are few—newly standard are Laguna leather interior appointments and a navigation system. CG’s test car was sprayed in Plum Crazy paint, a new limited-production color for the ’Cat plucked from the showy “High Impact” palette from Dodge’s glorious muscle-car past, circa 1970. However, this nostalgic deep purple was only available for the first few months of the 2016 model year.

Still, even if you’ve driven a Hellcat before, it’s hard to be blasé when depressing the starter button and summoning all those wild horses that will drag you away in a hurry from whatever you were doing before. The Hellcat’s exclusive 6.2-liter supercharged Hemi V8 wakes up in a roaring bad mood, continues grumbling the whole time that you drive it, and whines through the twin-screw supercharger when you need it to get a move on. That sounds miserable, right? On paper (or whatever this is), true; on pavement it’s a siren’s song.

With 650 lb-ft of torque peaking at 4000 rpm, the Charger Hellcat has provided enthusiast-magazine test times of less than four seconds in the 0-60-mph sprint and sub-12-second quarter miles. With nearly three-quarters of this driver’s 178.7 test miles consumed in mucking through sluggish morning and early evening urban commuter traffic, there wasn’t much opportunity to replicate that kind of performance. However, it takes just a moment to realize that in a Hellcat you’ll never have to worry about executing a highway pass or making open-road miles disappear in a hurry. Selectable “Sport” and “Track” performance settings let the 8-speed automatic transmission stay in gear a little longer before booting you up through the gears, and launch control helps to spare the rear tires somewhat during more, um, volcanic starts.

Unfortunately, the fun’s over the moment you pull up to the pump. The Charger Hellcat’s EPA fuel-economy ratings are just 13 mpg in city driving, 22 mpg on the highway, and 16 combined. Ah, if only: This tester averaged a mere 11.5 mpg during his stint. Oh, and those are premium-fuel gallons.

Like other SRT vehicles, the Charger Hellcat’s infotainment system comes with a slick “Performance Pages” feature that includes virtual auxiliary gauges and a timer for 0-60-mph-, 1/8-mile-, and 1/4-mile runs.

Handling and braking are, respectively, very good and excellent—all the more so for a car of this heft. As for downright nimble, well, let’s not get carried away here. . . . Ride is better than imagined from a very-high-performance car, with decent bump absorption in the base “Default” mode. (The aforementioned performance settings also alter steering and suspension functions.)

Here’s what else you can expect from the big-boss Charger: 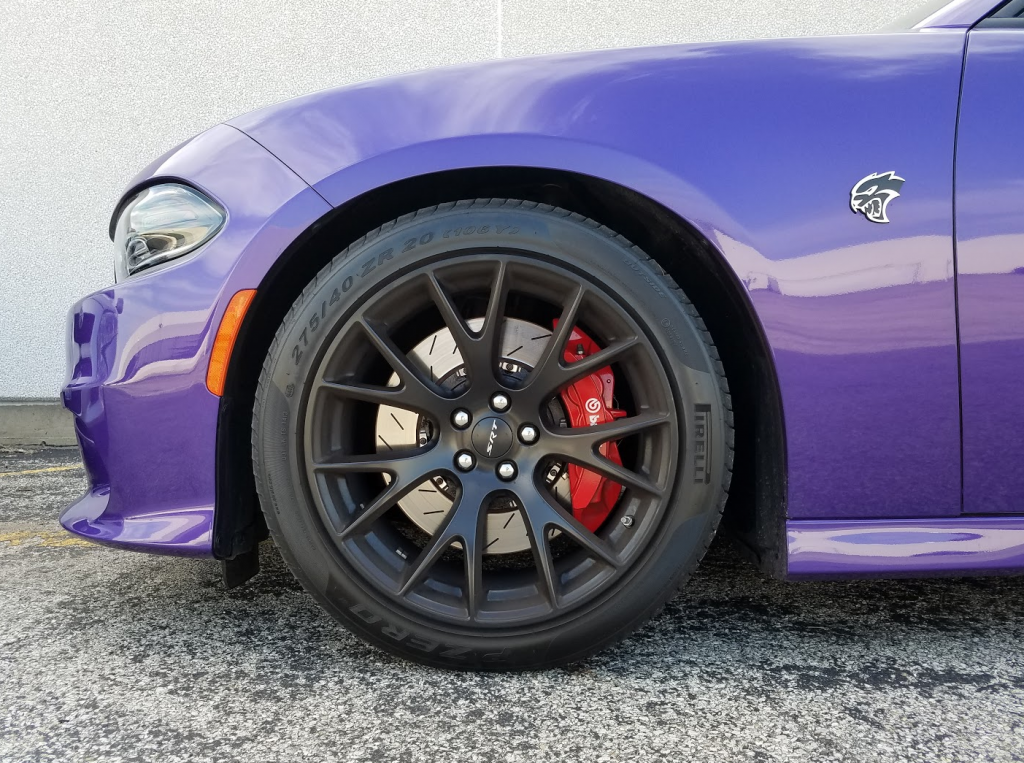 Massive 20-inch wheels look sinister in black, and do a nice job of showing off those 15.4-inch Brembo 6-piston brakes. Pirelli P Zero summer tires are a $595 option.

But that’s okay, because driving a Hellcat Challenger or Charger is an exercise in living in the present. To fully enjoy this car, buckle in and drive off. Don’t turn on the radio, because any sound coming through the speakers is likely to muffler the otherworldly whine of the Hellcat supercharger. Don’t roll up the windows, because the exhaust note is worth the $71,000 price of Hellcat admission alone. Instead, just live in the moment.

Hit the gas hard when you can, tolerate lesser traffic as you must, and find time to exploit an onramp when traffic is light. Amazingly, the Charger SRT Hellcat is as docile to drive as any V6 Charger; it even rides about as well.

You could commute in a Hellcat every day, but that would be overkill—a little like living at a Four Seasons or working at a combination bakery/brewery that pays its employees with free samples.

It’s easy to question why any company would sink money into a vehicle this over the top, but on some level, it’s comforting to know that a car like this is still being built—for now. Long live the Hellcat.

Aggressive front and rear fasciae, a functional scooped and vented hood, and a rear decklid spoiler muscle up the base Charger’s already-dramatic styling.