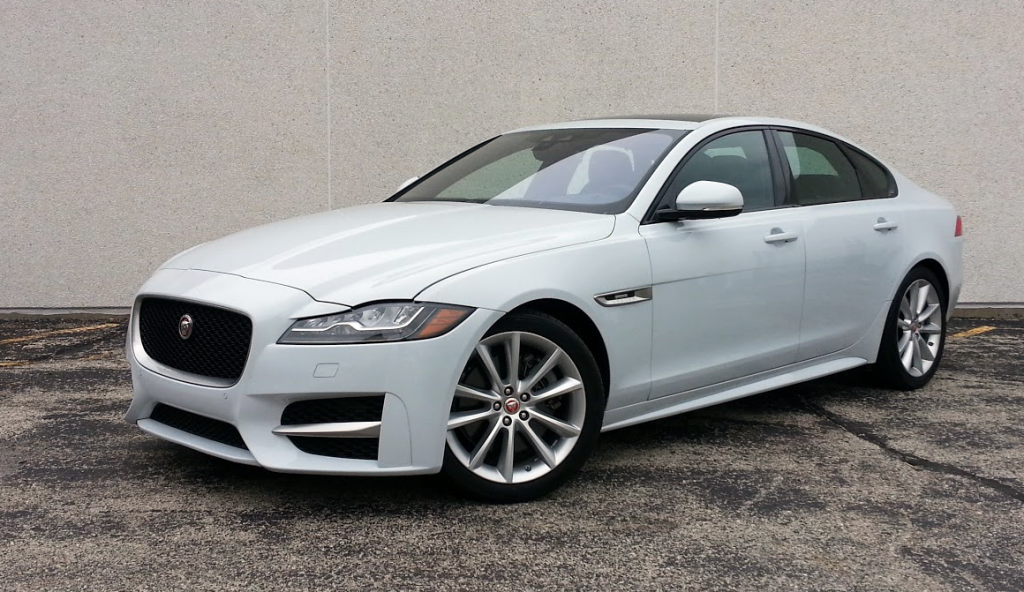 The not so good: Front corner and side visibility

While Jaguar’s XF midsize sedan emerged wholly redesigned on a new lightweight platform for 2016, the manufacturer isn’t wasting any time moving on to the car’s next phase. The 2017s are already set to be let out of their cage with the addition of a 180-horsepower 2.0-liter diesel four-cylinder to join the supercharged V6s already in place.

Before the ’16 model year was somewhat prematurely swept away at Jaguar, Consumer Guide® tested a second V6 XF, this a 340-horsepower job in R Sport trim. This test came a couple months after having a go in the top-end S model with 380 horsepower on tap. The takeaway from these tests is that you can feel the difference under your right foot and see it in your wallet.

Though the redesigned 2016 Jaguar XF doesn’t look much different from its predecessor at first glance, it cuts a sporty profile from most any angle. Glacier White Metallic paint is a $500 option.

While the R Sport engine concedes 40 horsepower to the S powerplant, torque output is much closer—332 lb-ft for the former and 339 lb-ft for the latter, both available from 3500 to 5000 rpm. As such, the R Sport is practically as eager as its costlier companion to step out from a stop (Jaguar says it is a mere .1 of a second slower to 60 mph than an S) but doesn’t have quite the legs to maintain that pace. That’s not to say the XF R Sport is outright slow—it’s not. The eight-speed automatic transmission knocks off crisp shifts, and with the variable “JaguarDrive” clicked into “Dynamic” mode, it is marginally faster on the uptake than when in the “Normal” setting. (“Winter” and “Eco” modes are available too.) The engine is quiet enough to let a whiff of supercharger whine make itself known during acceleration. 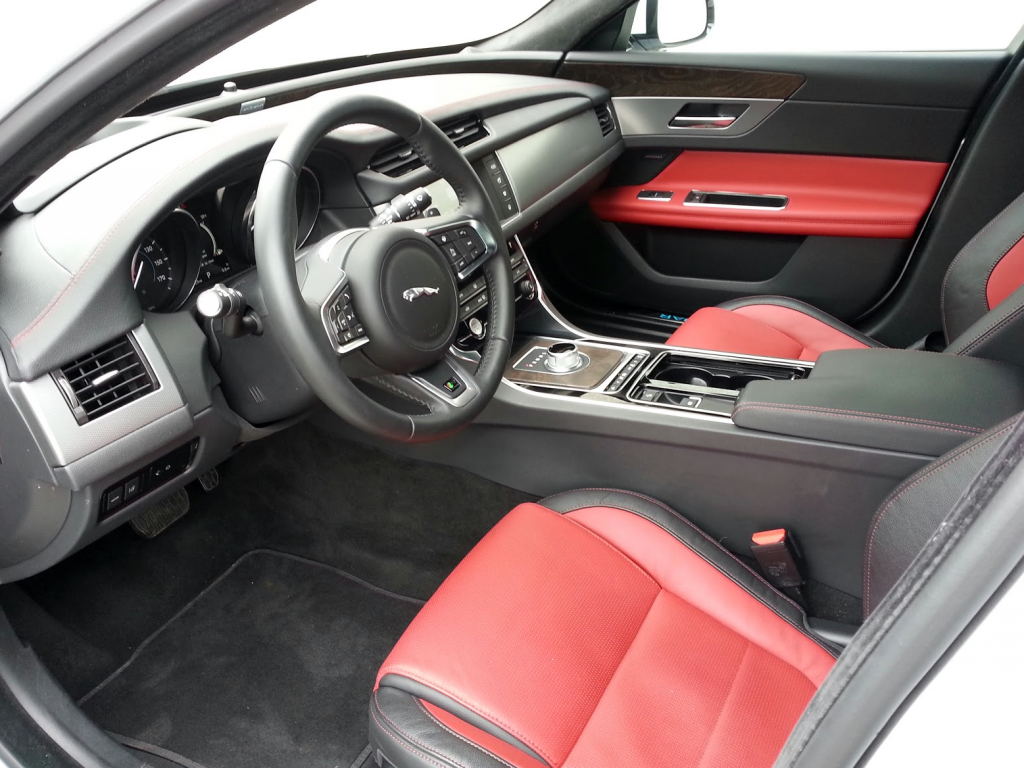 The XF cabin meets our expectations of Jaguar luxury, with the red upholstery accents adding a decidedly sporty flair to the interior.

Curiously, the 340-horse V6 has the same EPA fuel-mileage rating as the 380 unit: 20 mpg city/30 highway/24 combined with rear-wheel drive, which both test cars had. However, this driver saw 20.5 mpg in the R Sport after a turn of 220 miles, 65 percent of which came in city style driving—almost three full mpg better than he attained with the S during a shorter drive but with nearly the same amount of city miles. A standard engine stop/start (that can be switched off) is employed to extract further gas savings.

Still, driving dynamics and cabin ambiance weren’t too far apart in the two XFs that CG sampled. Dynamic mode firms up steering feel, and the adaptive-damping suspension (standard in the S, optional in the R Sport) delivers a comfortable ride, especially in Normal mode. Brakes deliver quick and predictable stopping power well before the pedal nears the floor.

Controls are generally easy to see, if not always simple to use. The vehicle-information display between the speedometer and tachometer is a riot of menus brought into play by the thumb buttons on the steering wheel. Looking for the trip-odometer reset? Keep clicking, pal—you’ll get there. The XF has managed to avoid adopting a central-controller system to which some other luxury brands have fallen prey for audio, navigation, and other functions. The touchscreen presents unambiguous options that open at a tap. Radio stations can be tuned directly and saved as presets with the press of a fingertip.

Subtle R Sport badges in the front-fender trim are in keeping with the XF’s understated-yet-aggressive good looks.

For some reason, front seats in the R Sport were a little more comfortable than those in the S. Leg- and headroom are generally good in both rows. Windshield and door pillars are thick enough to restrict driver vision somewhat, but rear pillars that are thinner than in some sedans avoid egregious obstruction to over-the-shoulder sightlines. Interior materials are up to luxury standards, and the red-and-black upholstery in CG’s test car was downright sporty. Soft-touch materials grace most surfaces. Extra-cost ash burl veneer dressed up the cabin.

Personal-item storage is good but not spectacular. A sizeable glove box is countered by a small-capacity console box that houses auxiliary and USB ports, a card slot for the navigation system, and a power point. Doors have generous map pockets, and net pouches are affixed to the backs of the front seats. Twin cupholders are hidden in the console and built into the pull-down center armrest in the rear. The flat trunk floor sits high enough to take some strain out of loading and unloading but restricts the height of objects placed there. On the other hand, the space is fairly wide with limited space taken up by the wheel houses. Rear 40/20/40 seats are nearly flat when folded but they rest about 1.5 inch below the level of the trunk floor.

Curiously, despite its lower starting price, the R Sport that CG tested totaled out almost $2000 more than the earlier S. Like that earlier XF, this latest example bore extra-cost paint, head-up display, and a Comfort & Convenience Pack (ventilated seats with three-stage heating and cooling in front and heated rear seats, power-close trunklid, and “soft-close” doors). However, the R Sport in this test went further with the wood interior trim, adaptive-damping suspension, and a Luxury Interior Upgrade Pack with an electric rear-window sun shade, rear side-window shades, four-zone climate control, suede headliner, 10-color ambient lighting, and illuminated door sills for an as-delivered price of $69,185.

If that sounds like your ideal mix of performance and luxury in a midsize sedan, don’t worry that the end of the ’16 model year is already at hand. It will be back as part of the expanded XF family for 2017.

As Jaguar’s midsize sedan, the XF slots in price and size between the compact XE and large XJ models.