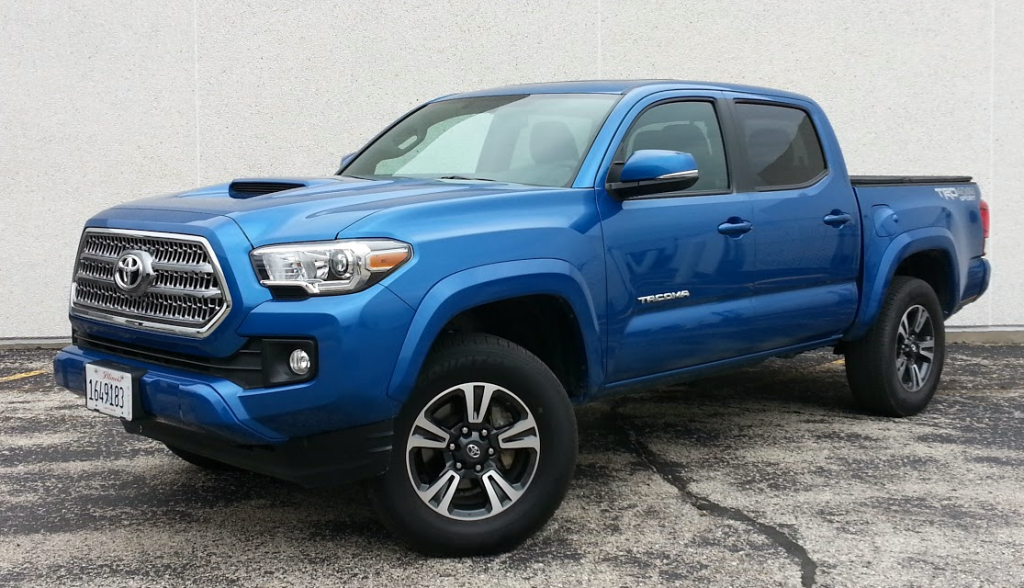 The not so good: Ride quality is somewhat busy, so-so interior materials

In the world of cars and trucks, there’s new and there’s newish. The 2016 Toyota Tacoma is a bit of both. Toyota’s compact pickup boasts revised styling, a nice new V6 engine, and some necessary equipment additions, while riding on a beefed-up version of the previous model’s frame and offering the same cab configurations and base four-cylinder engine as before.

The new engine, a 3.5-liter powerplant that makes 278 horsepower at 6000 rpm and 265 lb-ft of torque at 4600 rpm, was in the four-wheel-drive TRD Sport Double Cab that Consumer Guide® sampled. As the replacement for a larger but less powerful V6, the new mill delivers solid, if not racy, acceleration from a standstill. On the highway, it responds well to demands for added pace, and when the driver really wants to get away in a hurry, the new six-speed automatic transmission (a six-speed manual is also offered with 4-wheel drive) kicks down quickly into the right gear for purposeful scoot. Meanwhile, possessed of Atkinson-cycle valve actuation, the 3.5 V6 is EPA-rated for better mileage than its 4.0-liter forebear at 18 mpg in the city, 23 mpg on the highway, and 20 combined. When this driver put 178.1 miles on the test truck, 67 percent of them in city-style operation, it returned a commendable 20.05 mpg. 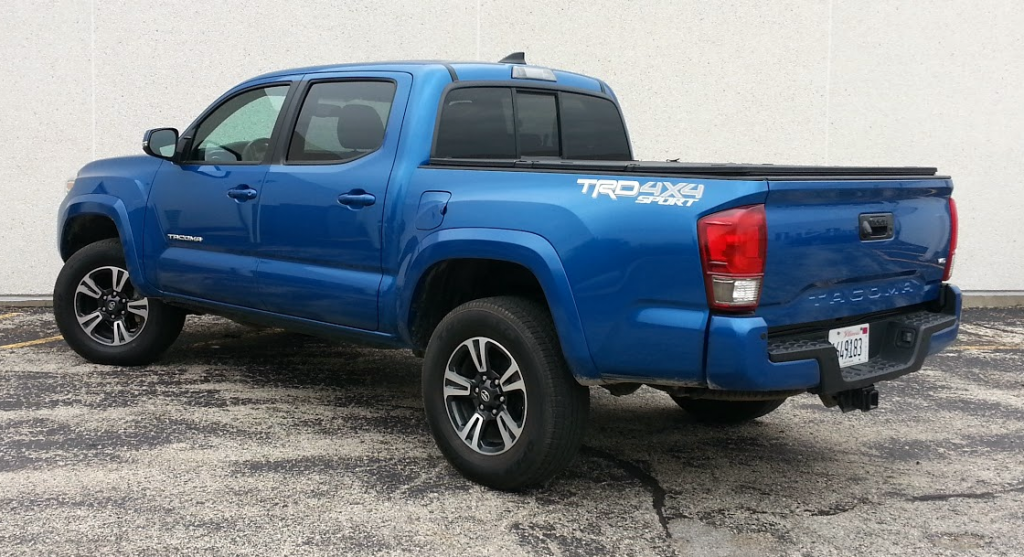 Ride is pretty good for an unladen pickup. (This reviewer didn’t get to use it with a load in back.) With standard 17-inch wheels, a solid-axle/leaf-spring rear suspension, and sport-tuned shock absorbers, the ride is a little “busy” over pavement irregularities, but rear-end motion doesn’t get too exaggerated, and the suspension recovers promptly. Braking is very good as well.

The TRD Sport sits at the exact center of the 2016 Tacoma lineup, with the SR and SR5 below it, and the TRD Off-Road and plush Limited above it. With the part-time four-wheel drive, automatic transmission, and full four-door Double Cab, the base price of CG’s test truck was $33,730. In terms of running gear, that buys a two-speed electronically controlled transfer case and a limited-slip differential. The cargo bed incorporates a new easy-lowering tailgate, a deck-rail system with four tie-down cleats, and a 120-volt electrical outlet.

Tacoma’s cabin trails the Chevrolet Colorado in terms of space and finish, but it still feels appropriate for a truck that gets dirty every now and then.

The interior is done up in patterned-fabric seats with lumbar support for the driver, plus a leather-wrapped steering wheel. Safety and convenience features include LED fog lights; power exterior mirrors with integral turn-signal indicators; a rearview camera; keyless entry and remote starting; a new touchscreen audio system with navigation, Entune app suite, satellite radio, and Bluetooth connectivity; and Qi wireless smartphone charging, another first-time feature in the Tacoma. 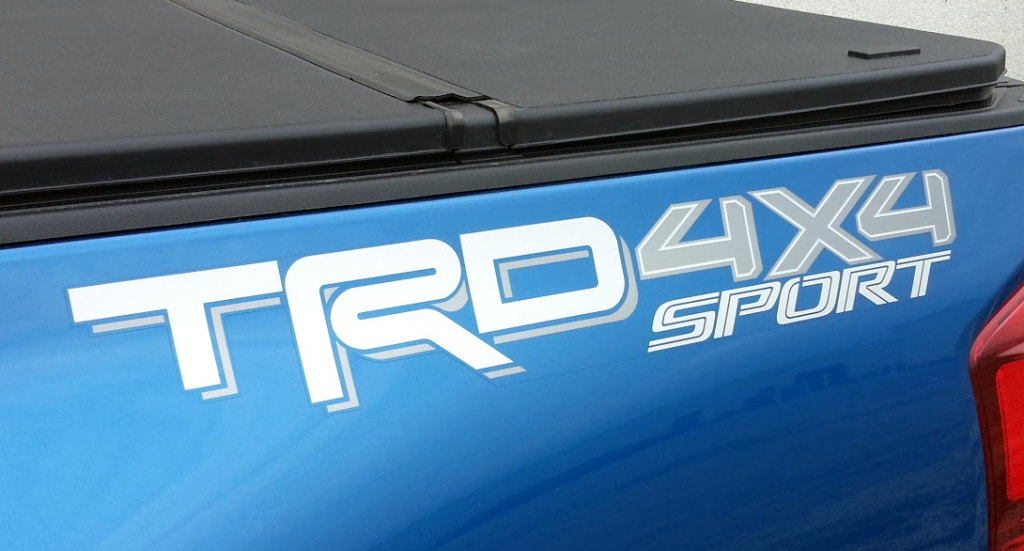 Flashy bedside graphics are standard on the TRD Sport.

Final delivered price of the test vehicle came to $38,995. That was thanks to the addition of a towing package, a three-piece hard tonneau cover for the cargo bed, and a substantial package of technology features. The last included an uprated JBL sound system, front dual-zone climate control, heated front seats, rear parking assist, blind-spot monitor and rear cross-traffic alert, automatic headlamps, and a power moonroof.

There is good head- and legroom in front, even with the moonroof taking up some overhead space. CGers who’ve been in a Tacoma with the extended-length Access Cab say its rear seat is tight. The Double Cab clearly has more rear-seat room but the wide-open spaces it’s not. With feet tucked under the seat ahead, this tester’s knees were up against the seatback with no room to spare. Headroom is not a problem, though. There’s the width (and seat-cushion comfort) for three adults across the back, but not really the foot room for an adult middle passenger, and the rear seatback is a bit too upright and firm for long-distance ride comfort.

The ride height of 4×4 Tacomas will challenge shorter passengers when getting in or out of the truck. Grab handles come in handy for assisting entry. Drivers will enjoy a commanding view of the road, though the hood scoop that’s unique to the TRD Sport obstructs vision just beyond the hood. Otherwise it’s easy to see out of the cab in all directions. 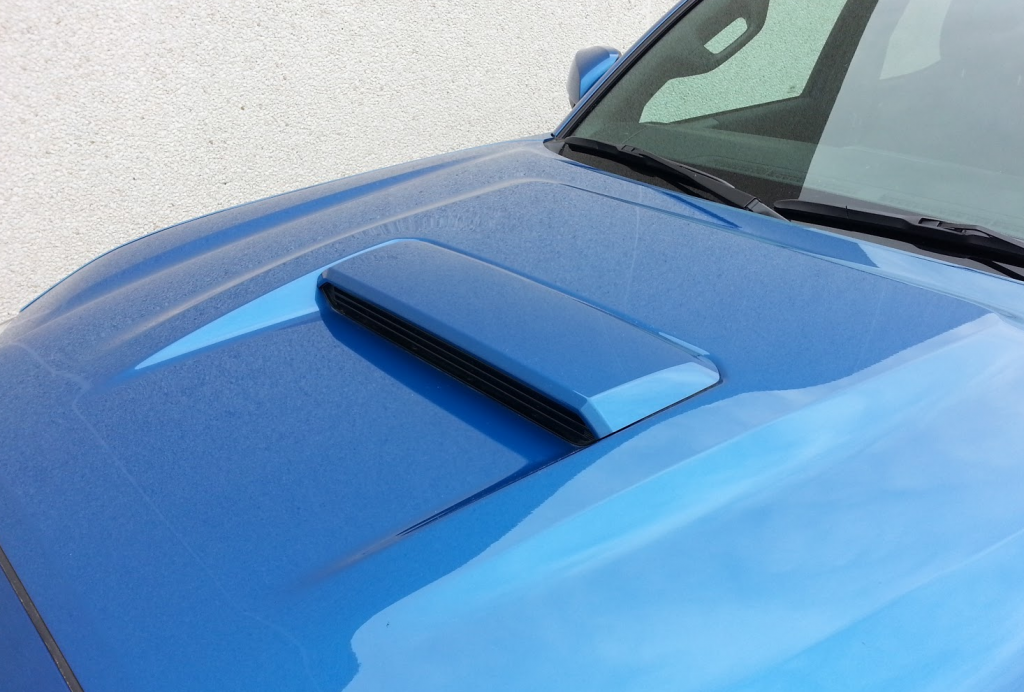 Tacoma’s hood scoop may not be functional, but we think it looks pretty cool.

Interior presentation in the Sport is short on flair, with sturdy cloth on the seats, and black plastic on the dash, doors, and instrument cluster. Soft-touch surfaces are reserved for door panels and armrests. Instruments and controls are easy to read and use. The dial for 2WD/4WD selection is low on the dash just to the right of the steering wheel. Working the audio system through the seven-inch touchscreen is straightforward to tune, save, and access. Thumb buttons on the steering wheel make use simple. The climate system is managed on a separate panel with three dials—two for temperature selection and one in the middle for fan speed. Other functions are handled by buttons clustered between the dials. Interior storage starts with a bilevel glove box that still has a bit of room left over even with all manuals in place. The covered console box is essentially a cube; USB and auxiliary inputs are found below the bank of climate controls and above the Qi charger pad. Front doors have pockets with two bottle holders each—but not much room for anything else. Rear-door pockets are longer, and still have room for two bottles. A pouch is attached to the back of the front passenger seat. Three open cupholders—two ahead of the shifter, one directly behind—give front-seat occupants some flexibility in choosing where to rest their liquid refreshment. Two more cupholders are cut into the back of the console for the benefit of rear passengers. The rear seatback is split 60/40 and folds flat to offer cargo-storage options.

The Tacoma’s added features bring Toyota’s compact pickup up to date. The TRD Sport’s powertrain and suspension make it fairly fun to drive. The price makes it worth looking into.

Given this truck’s sporty off-road pretensions, I had expected it to ride much more stiffly. In fact, the Tacoma TRD Sport’s ride is remarkably forgiving. A couple of things worth noting: First, the optional tonneau cover is not waterproof, which is kind of a bummer. Second, the tailgate is not paired to the central locking system, so carrying an extra key is must. The windshield-affixed GoPro camera mount is a cool idea.

Toyota Tacomas have excellent ground clearance, but a relatively “shallow” interior with a high step-in height.