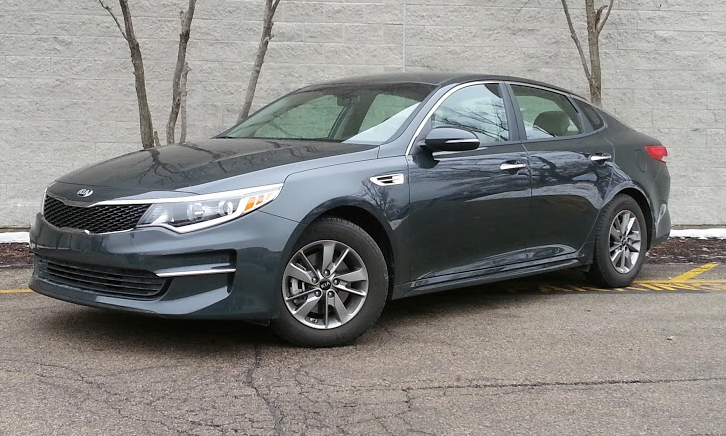 The not so good: Optima’s “small” turbo low on refinement

You give up quite a few things by selecting a Kia Optima LX Turbo instead of its all-in SX Limited sibling. For starters, you cede 67 horsepower. Say good-bye to the sport suspension, 18-inch wheels, paddle shifters, spoiler, and high-intensity headlights. Cold mornings will cause you to miss the heated leather seats and heated steering wheel; balmy afternoons will make you long for the panoramic sunroof. While you’re at it, cross off the power-adjustable front-passenger seat, surround-view monitor, 10-speaker audio system, rear-door sunshades, carpeted floor and trunk mats—even the spare tire. 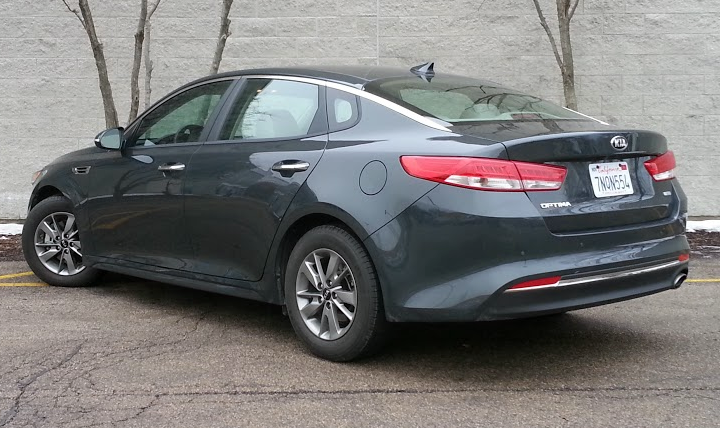 With a 1.6-liter turbocharged engine and a 7-speed automated-manual transmission, the LX Turbo is the fuel-economy leader of the Kia Optima lineup.

Here’s what you keep: up to 11,800 of your hard-earned dollars. That’s the considerable difference between the starting price of the LX Turbo that Consumer Guide® editors tested and the tab for the 2016 SX Limited that they drove previously. Even with an option package that added technology features like navigation, Kia’s UVO infotainment/connectivity system, electronic driving aids, and more (though none of the items listed in the previous paragraph), the sample LX Turbo was $9200 cheaper. OK, so you’ll buy a pair of gloves to grip the wheel on those frosty mornings—that still leaves $9180 to play with. 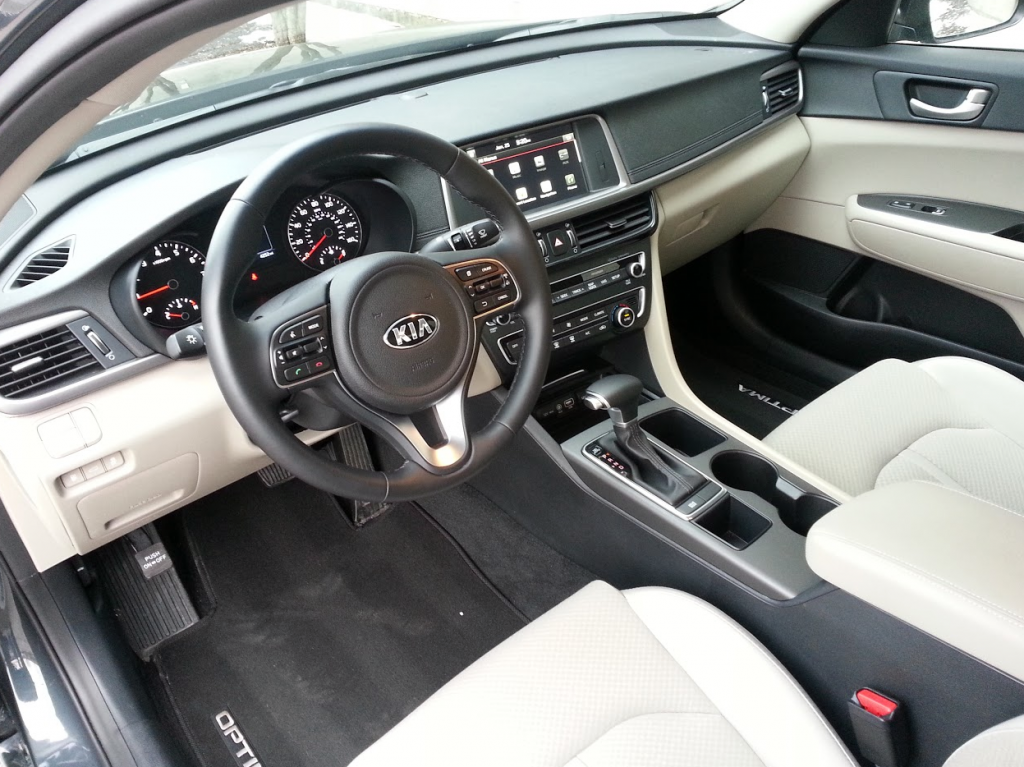 Not that the LX Turbo is too shabby for its $23,990 base price (plus another $825 for delivery). Its “small” turbo engine is paired with a seven-speed dual-clutch transmission, making it the only Optima to use this gearbox instead of a six-speed automatic. Other standards include gray-finish 16-inch alloy wheels; AM/FM/CD/MP3 audio with satellite radio; USB port, auxiliary input, and 12-volt outlet; Bluetooth connectivity; 60/40 split-folding rear seats; push-button start, “smart key,” and hands-free “smart trunk;” cruise control; tilt/telescoping steering column; and a leather-wrapped steering wheel with auxiliary control buttons. The LX Technology Package added to CG’s test car respectively upgraded the standard air conditioning and manually adjustable driver’s seat to dual-zone automatic climate control and a power seat with memory settings.

Otherwise, the LX Turbo benefits as much as any other Optima from the 2016 restyling that leaves the car slightly longer, taller, and wider than before. While the cloth seats are attractive and comfortable enough, they’re hardly as sumptuous as those in the SX Limited. However, there’s just as much soft-surface material on the doors and dash, and passenger room is even better—without the sunroof, there’s enough down-the-middle head room to make it possible for a third adult to slip into the back seat.

The LX Turbo has a slightly smaller vehicle-information display between the speedometer and tachometer dials, but it’s still easy to read. Setting radio stations is easily done on the eight-inch touchscreen that comes with the optional nav system. Below this are climate controls with rotating dials for temperature settings but buttons for other tasks.

Personal-item storage is no different from the big-bucks Optima. Highlights include a generous glove box, pockets with bottle holders in the doors, a covered bin that holds the device inputs, and a deep covered console box with an upper tray. There are cup holders in the console and in the pull-down center arm rest in the back. 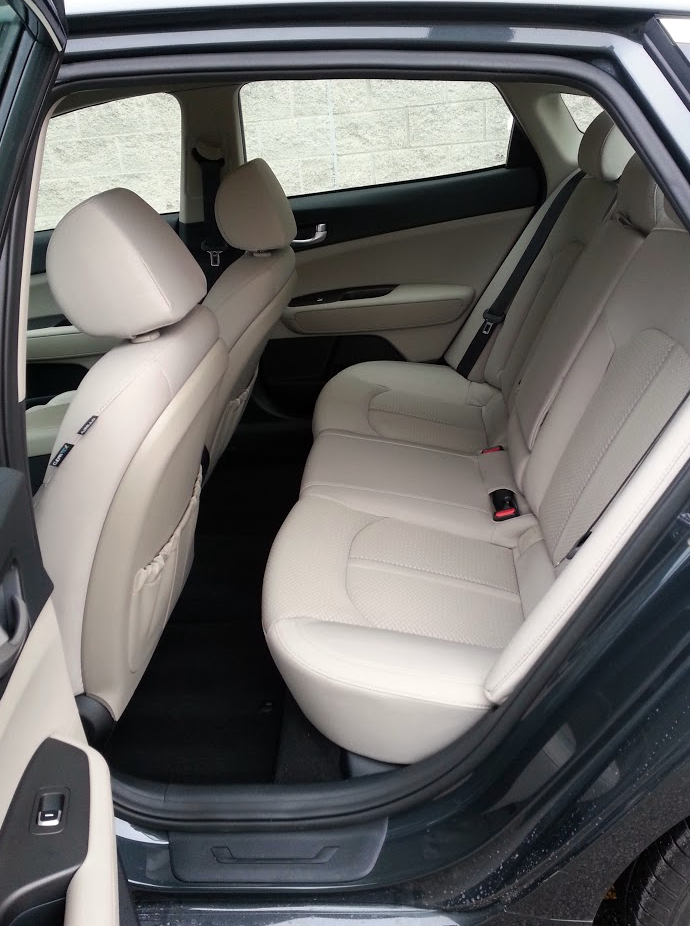 There’s good head- and legroom in Optima’s 2nd row, even space for the occasional 3rd passenger.

If the LX Turbo’s trunk makes any amends for the wheel houses that narrow the floor, and the high sill that promises problems for unloading, it’s in the form of an underfloor organizer that fills the space occupied by the mini spare in SX-level cars. (The LX comes with a tire inflator that is stored in the organizer.) When the rear seats fold down to increase cargo space, they do so a few inches above the level of the trunk floor, and a bulkhead behind the seats narrows the opening to the cabin.

The 178-horsepower 1.6-liter turbocharged engine is the least powerful among Optimas. The naturally aspirated 2.4-liter four makes 185 hp and the SX’s 2.0-liter turbo develops 245 ponies. However, at 195 lb-ft, the 1.6 turbo spins out more torque than the 2.4. Immediate throttle input from a standstill is greeted by a recalcitrant little grumble, as if the engine would prefer not to be bothered, and turbo lag seems more apparent than with the 2.0. Once under way, though, acceleration is peppy, and highway cruising is easy and quiet. Button-selectable “Sport” mode delivers quicker throttle response than the base or “Eco” settings. Double-clutch transmissions can be prone to rough shifts, but the one in the LX Turbo didn’t seem to have that problem.

EPA estimates for the LX Turbo are 28 mpg in city driving, 39 mpg on the highway, and 32 combined. However, this tester averaged just 28.94 mpg from a 209.3-mile test stint in which city-style driving accounting for 51 percent of those miles. For reference, that was 6.75 mpg more than he got when driving the 2.0-liter turbo, so one other thing an LX owner will keep is a bit more gas money.

Despite the different underpinnings to the 2016 Optimas that CG has tested, ride and handling in the LX Turbo had the same good-but-not-quite-great feel. The cabin is fairly well insulated against surrounding traffic noise.

Even if the Optima LX Turbo isn’t a class leader in every category, it is roomy enough and possessed of enough features to be a good value at around $24,000—or even about $27,500 as CG’s test car was equipped. Price-conscious shoppers for a mid-size car ought to keep this one on their list. 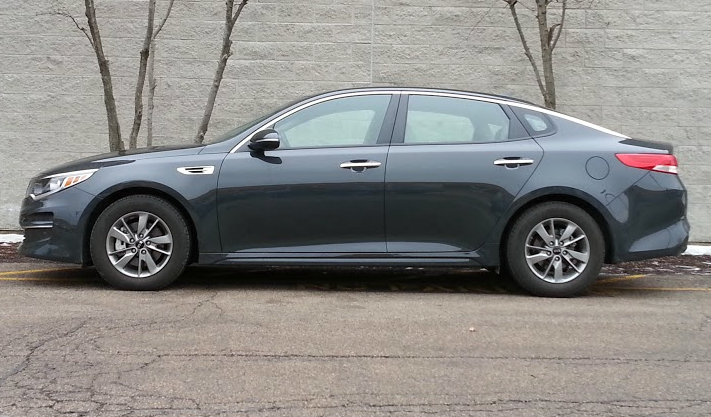