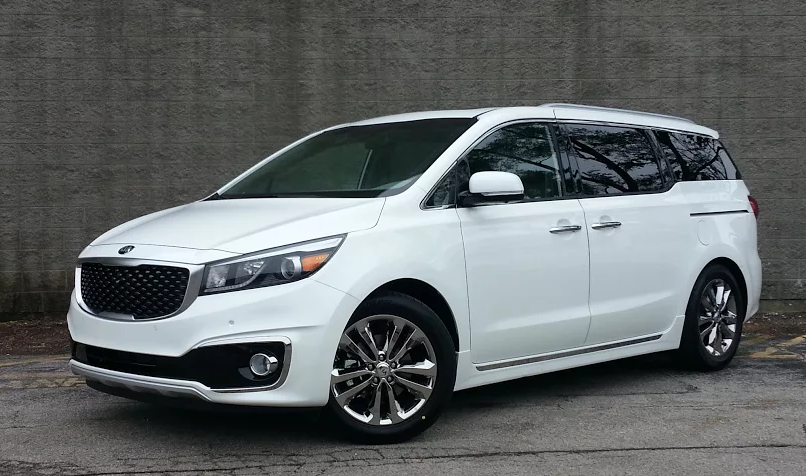 Kia re-entered the minivan market last year with a revamped Sedona. Although prices start at $27,295 including destination, our top-line SXL began at $40,885 and ended up–with some added options–at $44,690.

The good: Passenger room and comfort, good power and maneuverability for a minivan

The not so good: Mediocre fuel economy, slightly stiff ride 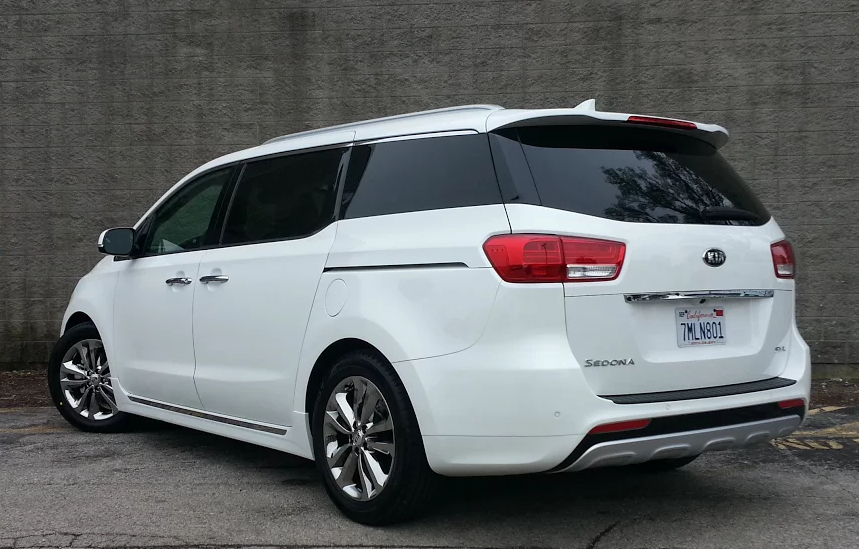 The Sedona is available in 7- and 8-passenger versions. The tested SXL comes standard with a “smart” power liftgate that raises automatically when someone is standing behind it with key in pocket or purse.

Kia packs quite a bit of family coddling luxury into its top-of-the-line minivan, the Sedona SXL. While it’s a little shy of perfect, its comforts and conveniences may make overlooking its shortcomings somewhat easier.

As in 2015, when the Sedona was thoroughly revamped, there are five trim levels. In ’15, the uppermost one was dubbed the Limited. Along with the name switch to SXL, a “Surround View” monitor that provides an overhead view of the vehicle within its immediate surroundings is newly standard. 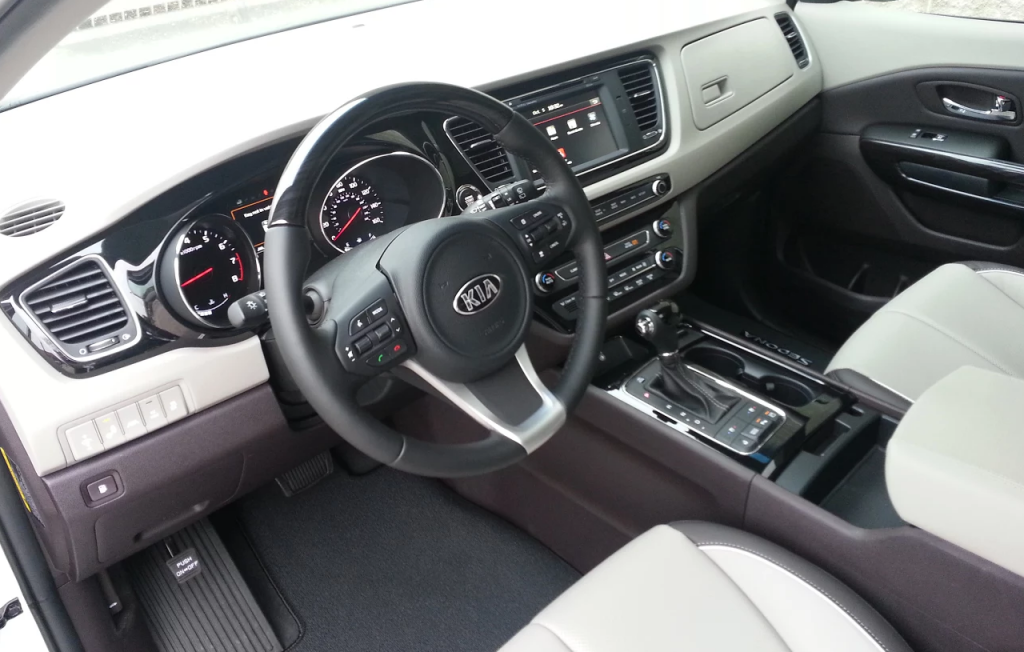 Sedona’s interior–at least in SXL guise–features lots of soft-touch surfaces, nice-looking trim, and plenty of storage space. Heated and ventilated front seats and driver-seat memory are standard on the SXL.

Aside from pumping up the bottom line, the full complement of features in the SXL actually has an impact its EPA fuel-mileage ratings. At 17 mpg in city driving, 22 mpg on the highway, and 19 combined, the SXL is rated one mpg less in the city and up to 3 mpg less on the highway than other Sedonas—all of which have the same powerteam. This driver’s test stint of 169.1 miles—64 percent of it in city driving—clocked in at 17.45 mpg.

The 276-hp 3.3-liter V6 and 6-speed automatic transmission team up for commendable performance. There’s decent pull from a standstill, sufficient highway-cruising strength, and responsive shifts and kickdowns. The electric power steering, a standard feature in higher-end Sedonas, is quick, which helps make Kia’s people-hauler fairly maneuverable. Ride, however, is a bit stiff and somewhat clunky over surface cracks. Push-button Drive Mode Select adjusts shift points and steering feel in a choice of “Normal,” “Eco,” or “Comfort” settings. In all honesty, this driver was hard-pressed to sense any clear-cut distinction between one mode and another.

Though not the cargo-volume king of the minivan class, the Sedona offers some flexibility. With the split-folding 3rd-row seats erected, additional space opens up below bumper height. When the seats are stowed into this well, it creates a larger flat floor. Optional “Slide-N-Stow” 2nd-row seats (which CG’s test van didn’t have) create additional cargo-space options in the middle of the vehicle. The SXL’s standard “smart” liftgate opens automatically a few seconds after it senses someone standing behind it while in possession of the key. 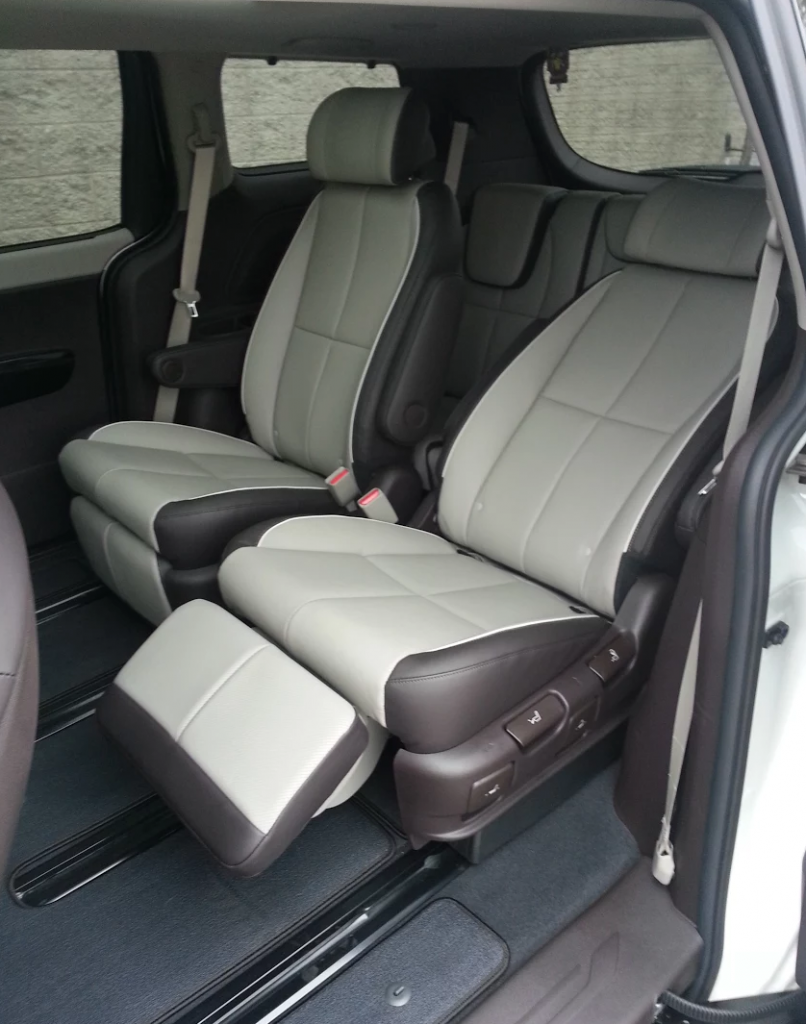 Passenger seating in the first two rows is roomy and quite comfortable. Indeed, 2nd-row riders in the First Class Lounge seats are treated handsomely. The individual seats are essentially recliners with retractable foot rests, plus flip-down arm rests on both sides of each seat. There’s ample fore-aft travel, and the second-row seats also can be adjusted laterally to either bring occupants closer together or to open a wider passage to the 3rd row when it’s in use. The back-row seat isn’t as comfortable as the others but—depending on how far back middle-row passengers set their seats—might suit a couple of adults for a while. Head room is generous throughout the vehicle, and visibility is pretty good, though raised head rests can obscure the view through the mirror somewhat.

Personal storage is handled by a bi-level glove box (cooled in the lower chamber), a huge covered console box with an adjustable central tray, and cup holders accessible to all three rows. There are pockets with bottle holders in all four doors, and 2nd– and 3rd-row occupants have access to pouches on the backs of the seats in front of them.

The driver is confronted by a pair of large analog dials. Between them is a 3.5-inch vehicle-information display, which is in color on SXLs. A large central screen displays audio, navigation, and UVO infotainment-system features. However, these functions are called up through a long row of pushbuttons below the screen. The standard tri-zone automatic climate control also has its fair share of buttons, though temperature can be set with convenient rotating dials.

The two-tone Nappa leather with contrast stitching in the test vehicle had a rich look and feel. (Front seats are ventilated.) Slightly spongy soft-touch surfaces covered much of the dash and doors—though 3rd-row denizens will find themselves hemmed in by molded plastic. The Sedona SXL needs these kinds of amenities to run in the same circles as other high-end minivans, but it requires some extra outlay for options to truly match them, which doesn’t make the SXL quite as competitive on cost.