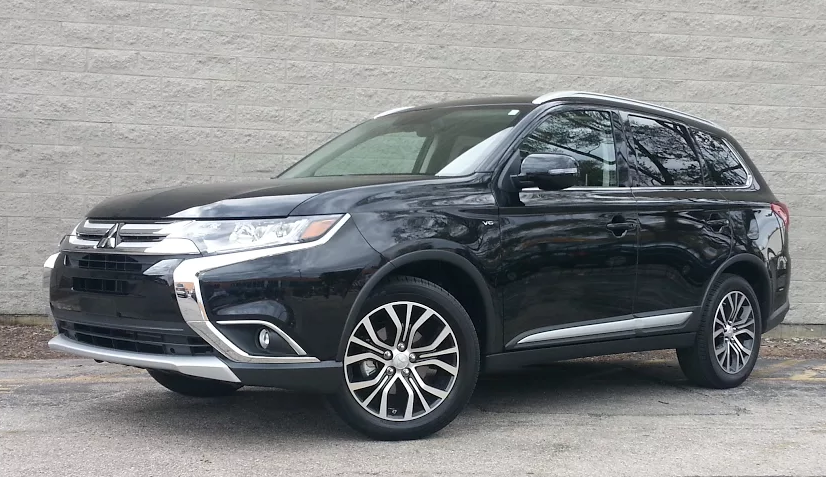 The Mitsubishi Outlander received a number of minor changes for 2016 including a restyled front end. It’s the only compact SUV to offer three rows of seats and a V6 engine in combination. In 7-passenger, four-cylinder, front-wheel-drive form, it starts at less than $24,000 with destination, though our top-line GT test vehicle with V6, AWD, and a host of high-tech convenience and safety features listed for $35,195.

Mitsubishi can click off a list of 100 changes to the 2016 edition of its Outlander compact crossover-sport-utility vehicle. Some of them are hard to miss (new grille, new taillight/tailgate designs), some are pretty arcane (black-painted muffler, improved door-closing sound), and a few are upgrades to the driving experience (sound insulation, chassis tuning). None, however, alter the fundamental nature of the Outlander as it’s been since 2014. 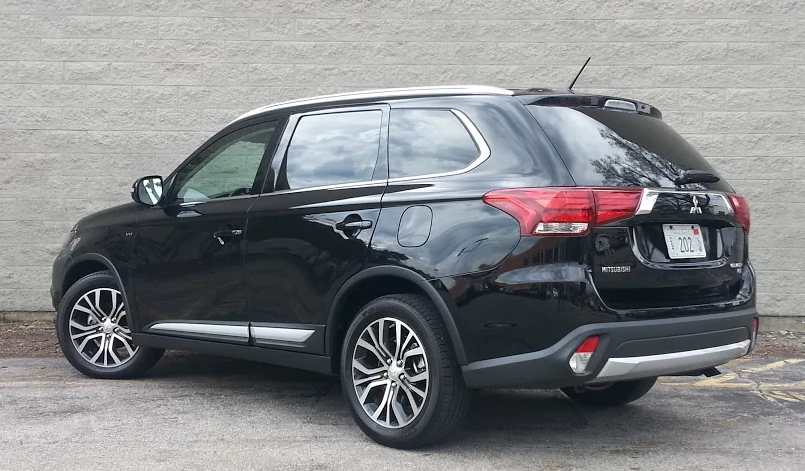 Our Outlander GT test vehicle was dressed up with bright trim and fancy wheels, and it included a rare-for-the-class power-operated liftgate.

At Consumer Guide® we know whereof we speak, because our testers have driven the GT model from each of the three model years that constitute the current generation of this vehicle. It is the last crossover in its class to offer a V6 engine, and one of just two (the other being the Nissan Rogue) to provide 3-row seating.

The carryover 224-horsepower 3.0-liter powerplant serves the GT well enough—perhaps better on the highway than around town. The 6-speed automatic transmission (with paddle shifters) is smooth and kicks down for passing without an undue wait. Selectable drive modes consist of “Normal,” “ECO,” “Snow,” and a 4-wheel lock. There is a perceptible dulling of acceleration when in ECO.

Mitsubishi recommends premium fuel for the V6. This driver averaged 22.05 mpg after driving the test truck 171.5 miles, 66 percent of that in city-style driving, and virtually all in Normal mode. The EPA estimates for the GT, which comes solely with the Super All-Wheel Control drivetrain, are 20 mpg in the city, 27 mpg on the highway, and 23 mpg combined.

From the 2015 model, yours truly carped a bit about substandard bump absorption, cabin vibration, and limp steering. The ’16 job seemed to do a somewhat better job of addressing all these areas.

For the most part, in terms of room and accoutrements, the current Outlander GT comes off looking and feeling much as its immediate predecessors did. The ’16 model starts at $30,995, which is a $2800 jump from the previous version, but Mitsubishi has shifted some key items out of the big-ticket Touring option package that was on CG’s ’15 tester and into the standard-equipment column. Those items include the perforated-leather seating surfaces, 8-way power-adjustable driver’s seat, 9-speaker Rockford-Fosgate audio system, silver roof rails, power sunroof, and remote power liftgate. (The current Touring Package has become a suite of technology features: navigation on a 7-inch touchscreen, forward-collision alert and mitigation, adaptive cruise control, and lane-departure warning that’s pretty quick on the draw to sound the alarm.) Pseudo-wood cabin trim has been replaced by glossy “black-line” panels. 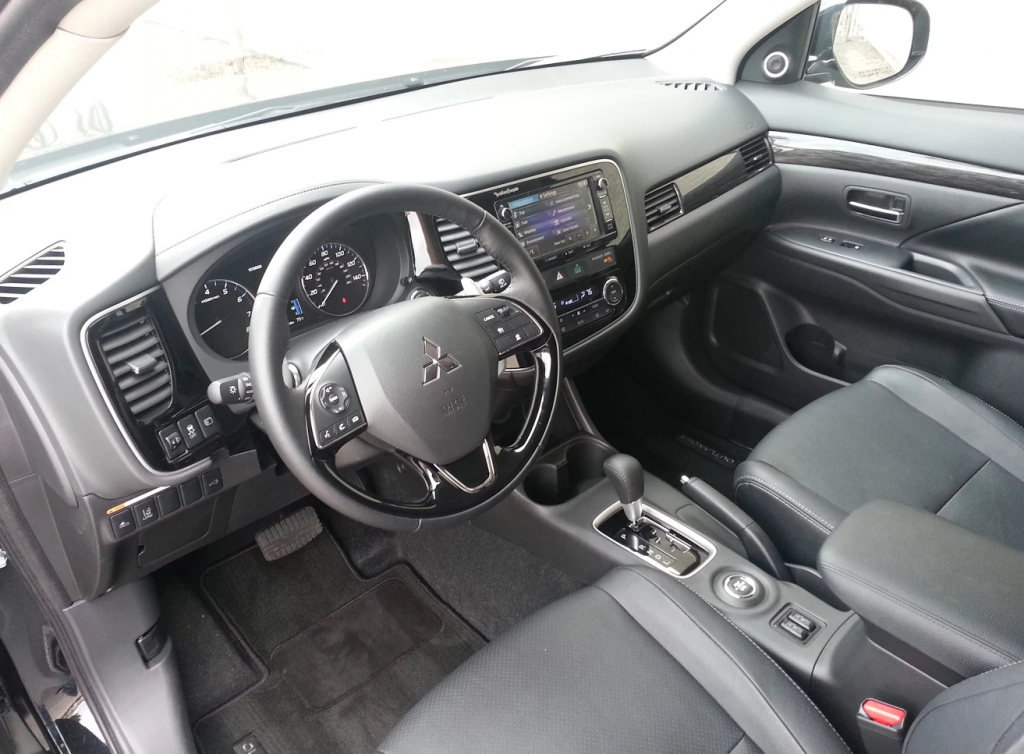 Though somewhat on the monotone side, the interior features numerous padded surfaces, “streaked” black trim, and easy-to-reach audio and climate controls.

The story on passenger accommodations is a familiar one. Front leg and head room are good, and seats are comfortable. The second row has acceptable adult leg room and the potential for three-abreast seating. Seats aren’t as well padded as in front. Third-row seats are low and short on leg room, limiting their effective use to hauling children. Large, easy-to-read speedometer and tachometer dials flank a colorful electronic vehicle-information display. It’s easy to select and set radio presets, which show on the same screen as the nav system. Climate controls rest below the screen within easy reach, though controls rely on a series of buttons. Standard tech capabilities include the company’s FUSE hands-free link and Bluetooth voice-activated connectivity, and a USB port.

There’s a little bit of work involved in folding the 60/40 2nd-row seats and 50/50 3rd-row seats. Second-row headrests need to be flipped down and the cushions released to pivot up and ahead of the seat frame, after which the seat backs can be folded down, where they lie flat and level with the cargo floor. In the 3rd row, the headrests need to be removed (they store in an underfloor compartment) before the seat back can be folded. With just the 3rd-row seat down, there’s sufficient room for several pieces of luggage or a week’s groceries for an average-sized family. 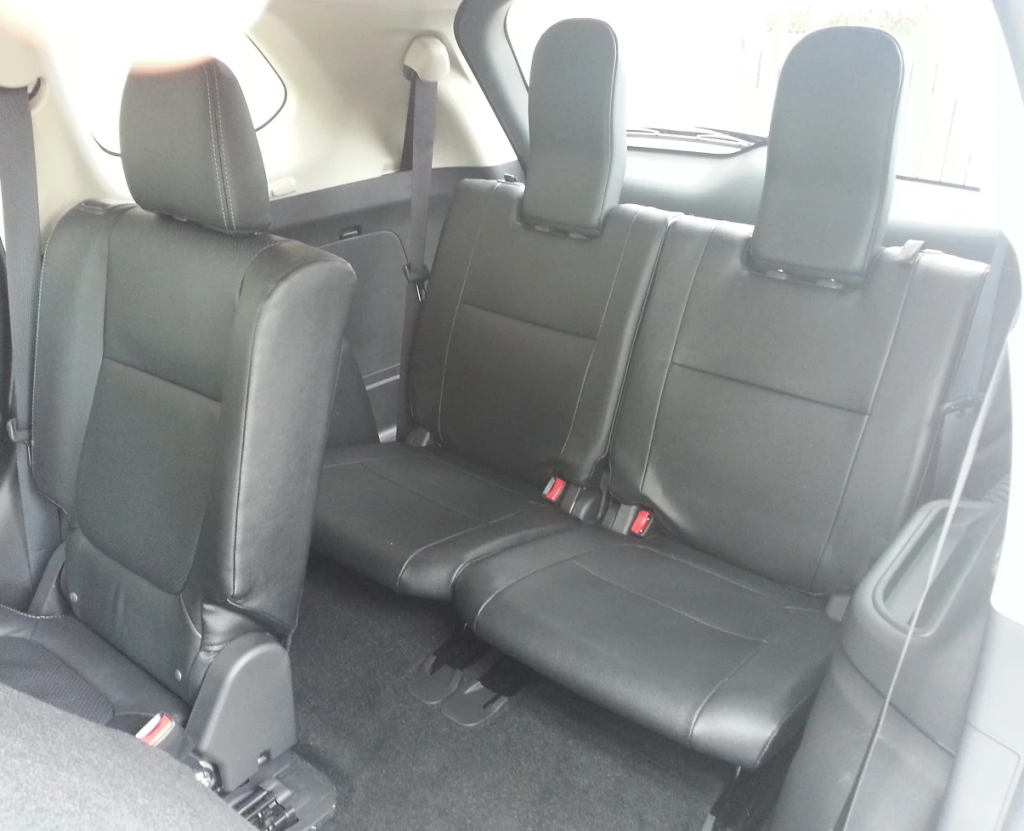 Two average-size adults can squeeze into the 3rd row, but they’ll ride knees up and might have difficulty getting in — and out.

Personal-item storage includes large front-door map pockets, a covered console box, twin cup holders in the console, a small open cubby under the dash, and a sizeable glove box. Second-row passengers have small door pockets, pouches on the backs of the front seats, and a pull-down center arm rest with 2 cup holders built in. All door pockets have bottle holders. Third-row riders are served by two open cup holders and a small open tray.

Bundled up with the Touring Package and delivery charge, the ’16 Outlander GT that CG tried out came to $35,195, which is a scant $50 more than the similarly equipped 2015 test vehicle cost. You can think of it this way: That’s just 50 cents per “improvement.” Even a black-painted muffler has got to be worth that much.

Nissan’s Rogue — the other 3-row compact SUV — outsold the Outlander last year by a 15:1 margin. That seems odd to me, as the Outlander has a lot going for it, most notably a 3.0-liter V6 that feels markedly stronger than the Rogue’s 2.5-liter four … especially with a load of cargo and/or passengers. Granted, the Outlander’s V6 spots about 5 mpg to the Rogue’s four in EPA figures, but I felt my 26.9-mpg average in about 80 percent highway driving (vs. the EPA rating of 27 mpg in all highway driving) was an impressive feat given the available power. 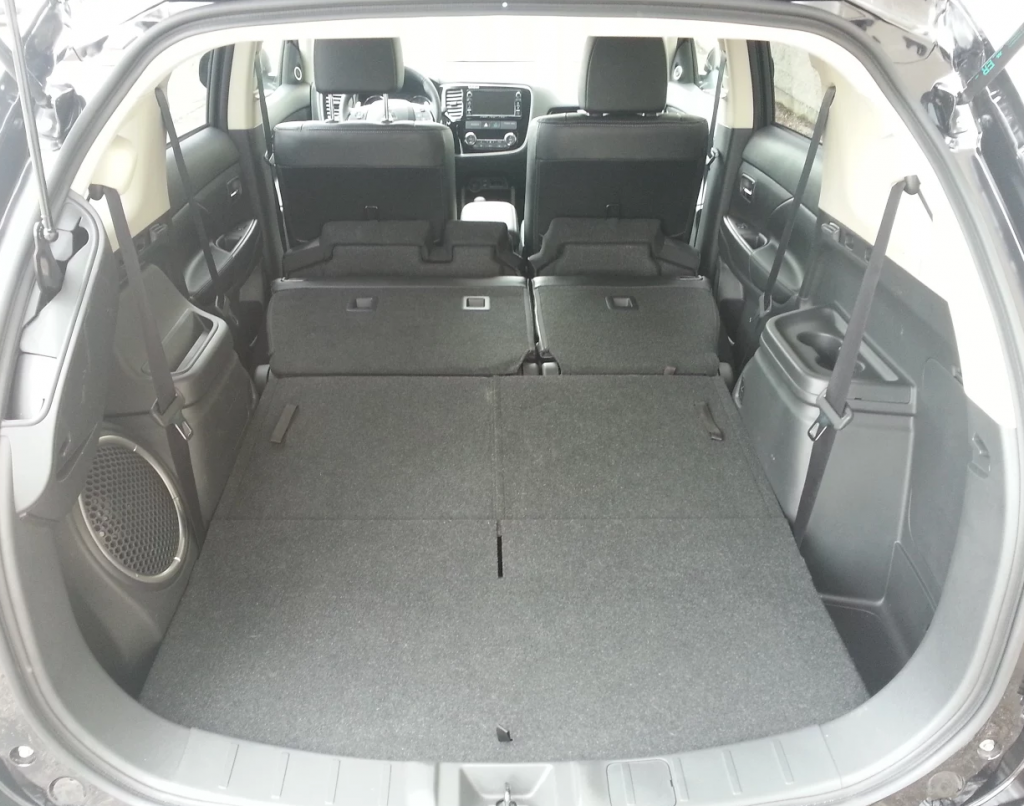 Also impressive is the passenger and cargo room. While John called 2nd-row legroom “acceptable,” I’d call it better than that. The seat slides fore and aft about a foot to balance legroom between the 2nd and 3rd rows, and fully back, I’d call 2nd-row legroom “ample.” I also managed to fit my “fully adult” 5’9 frame into the 3rd row — albeit after some contortions to get back there and with my knees riding up high — meaning it’s not just for the children John limits it to.

Visibility is quite good all around, and the soft-touch surfaces help dress up the interior to match the

price. And speaking of price, while the $35,000 sticker might seem a bit steep for a compact SUV, it’s really not if you consider its 7-passegner capability and all the high-tech safety features that includes.

Two things I noticed: one good, one … not. On our 2014 tester, the lane-departure warning seemed to automatically issue three beeps then three more beeps when you crossed a line, even if you’d already pulled back; this one seemed to stop after the first three. That’s good. But I also noticed that the power liftgate didn’t like to be stopped manually — for instance, if you saw it was going to hit the garage door overhead — as it would go into a fit jerking up and down. Kind of annoying.

But overall, I really liked driving the Outlander. It’s quiet, roomy, nice-riding, comfortable, handles well, and is quite responsive. Slap a Toyota badge on it, and it would give the Rogue a run for its money.