Buick’s Regal slips into the price gap between “regular” and premium midsize cars. Although the base model starts at about $28,000, the tested top-line AWD GS came to just under $42,000 loaded with options. The GS is distinguished from the front by its unique vertical vents below the headlights.

If any vehicle in Buick showrooms seems out of place, it’s the midsize Regal. Based on the German-market Opel Insignia, its sport-sedan flavor puts it at odds with the decidedly non-sporty Buick image.

But that’s exactly its mission: to appeal to a group of buyers that wouldn’t normally be thinking “Buick.” To that end, it offers a turbocharged engine and all-wheel drive, a combination not found in any other Buick car.

As with most Buicks, Regal sort of straddles the line between “regular” and “premium” classes (much the same as Volkswagen does), though the company mostly lists members of the latter as direct competitors. Some of that is due to traditional brand placement, but some is also due to a higher level of standard and available feature offerings along with dressier trim—though most “regular” midsize rivals are moving in the premium direction, at least with upper-line models.

The 2016 Regal lineup consists of a base model in three versions (1SV, base, and Premium II) and the line-topping GS, which is the sportiest Regal and the model driven at the preview. The GS is visually set apart with a unique front facia hosting prominent vertical side vents (vs. horizontal on other models), deeper rocker-panel moldings, rectangular dual exhaust outlets, distinct 19-inch wheels, and a rear spoiler.

Regal’s powertrain choices have been shuffled significantly over the past few years, with no fewer than six being offered at one time or another. These once included a “mild hybrid” powertrain and even a manual transmission, though neither is offered for 2016—at least, not to the general public. (Fleets can order the mild-hybrid eAssist powertrain, which at one time was standard.) This year, the base Regal trim level comes with a 182-horsepower 2.4-liter 4-cylinder engine, while all others get a 259-horsepower 2.0-liter turbocharged four. Both engines come only with a 6-speed automatic transmission. Front-wheel drive is standard on all models, but turbocharged versions can also be ordered with all-wheel drive. 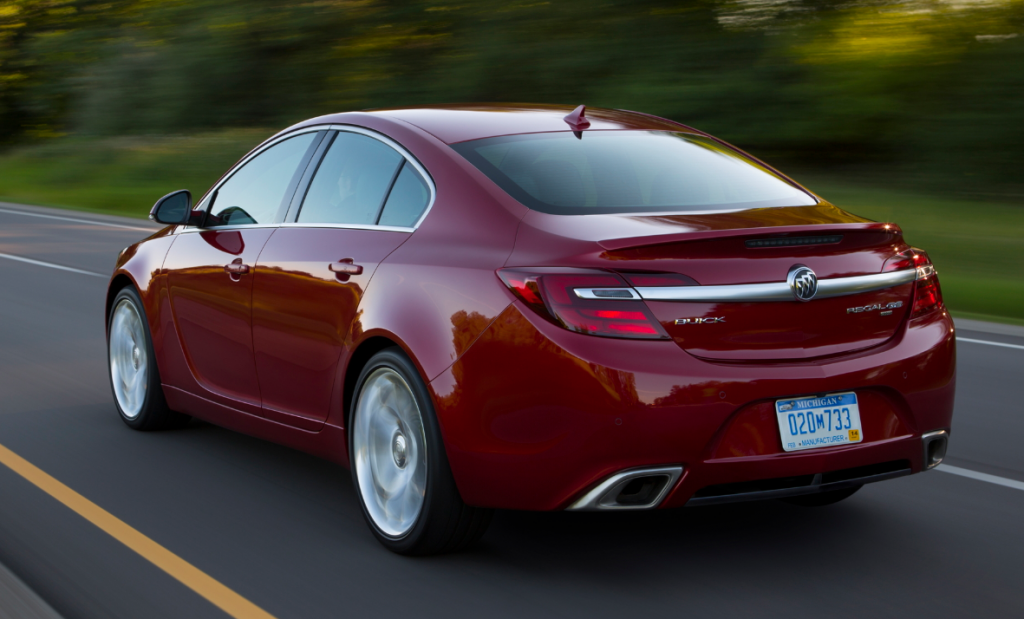 A rear view of the 2016 Buick Regal GS shows off its unique dual-exhaust outlets and trunklid spoiler.

Tested was the top-line GS that starts at just under $35,000 in front-drive form, about $37,500 with AWD. As the sportiest Regal, it sets itself apart with a lower ride height, bigger brakes clamped by Brembo calipers, larger wheels and tires (19s standard vs. 18s elsewhere, with 20s optional), and Interactive Drive Control, which allows adjusting suspension, steering effort, and transmission shifts for a sportier driving experience.

That all came into play on the Autobahn racetrack where the preview event was held. If you think it odd that a Buick – of any stripe – was on a racetrack, you’re not alone. But the all-wheel-drive Regal GS tested acquitted itself quite well, with the sport suspension and especially the brakes making it feel very un-Buick-like under what amounted to near-racing conditions. (Hauling down repeatedly from high speeds is where normal passenger-car brakes quickly reveal their limitations.)

On the road, the Regal GS rides quite well considering its performance-oriented mission, and the turbocharged engine exhibits very little turbo lag (a delay in power delivery as the turbo spins up) even in off-the-line acceleration, which is usually where a turbo engine seems weakest. Once underway, the only complaint is that the transmission is often slow to kick down to a lower gear when the throttle is stabbed. 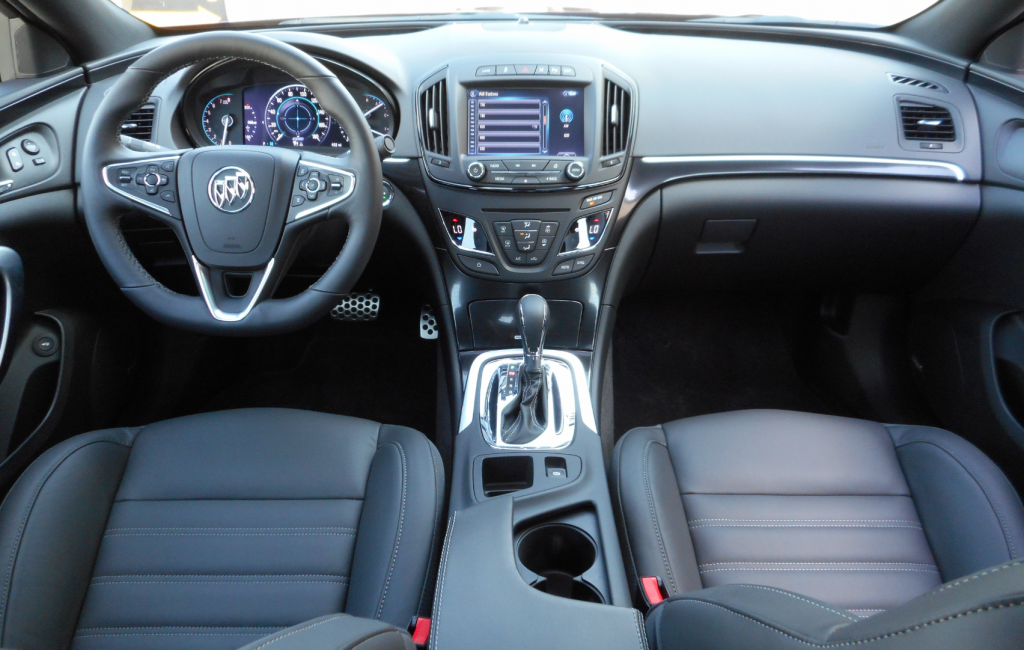 Although the GS’s monotone color scheme looks quite subdued, other models offer two-tone combinations that dress things up a bit. Materials are appropriate to the price, and the GS boasts sporty-looking carbon-fiber-like trim, satin-silver accents, and aluminum pedals. Audio controls and their accompanying screen are mounted high and are fairly easy to use, but they’re quite a reach away from the driver.

For a midsize car, the Regal falls a bit short in terms of expected passenger room. In front it’s fine, but rear-seat legroom disappears if the front seat is moved all the way back, and 6-footers probably wouldn’t have enough headroom.

Trunk space is just okay. The area is wide at the rear and there’s a fair amount of storage beneath the floor in the spare-tire well (there’s no spare tire in the GS, but rather a sealing kit and pump), but sickle-shaped hinges dip down into the load area (though they’re covered to prevent cargo damage) and the floor isn’t flat toward the front. Furthermore, folding the rear seat back leaves a 4-inch floor hump that must be cleared if sliding long items forward, and the seat back rests an inch below the level of the trunk floor.

Inside, visibility is decent to the front, not so good to the sides due to thick pillars, and good to the rear. The dash top, door tops, and armrests are padded, and the GS cockpit trim – carbon-fiber look with satin chrome accents – fits the price, and includes racy-looking aluminum pedals. The test cars had all-black interiors that came off as being just a bit staid, but two-tones are available on other models that brighten things up.

The audio system includes volume and tuning knobs, with station election being done on the large dashboard screen; all are a surprisingly long reach away. Climate controls are handier, with mode selection done with individual buttons while temperature and fan speed are adjusted with repetitive-step pushbuttons that can be rather tedious to use. 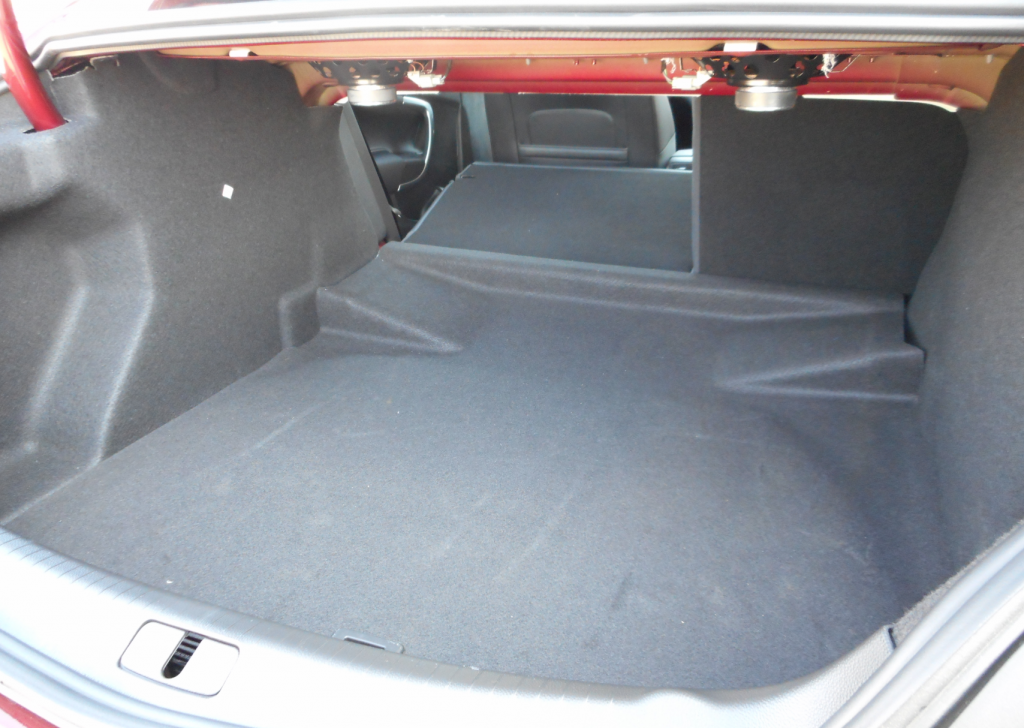 The trunk is spacious enough and includes some under-floor storage, but the floor isn’t flat toward the front, and there’s a tall lip between the trunk floor and the folded rear seat backs that makes it difficult to slide long items forward.

While the GS best fits the “sport sedan” image Buick is shooting for with the Regal, lesser models may be more to most people’s liking – or at least their pocket book’s liking. Those looking for features not commonly offered in regular midsize cars while undercutting the price of premium ones might lean toward an all-wheel-drive Premium II, as it and the GS are the only models that offer all the high-tech safety hardware as options. Adding those features brings an AWD Premium II to about $38,000 (figure about $41,000 for a similar GS), which is the jumping-off point for many premium midsize sedans.

Many middle-aged folks, especially, think of Buick as an “Old man’s car.” That’s an image the company has long been trying to change, and today’s younger generations probably don’t look at it that way. But the Regal is a car that might even attract Baby Boomers who used to discount the brand entirely, as it’s really just a European sports sedan hiding behind a Buick Badge.