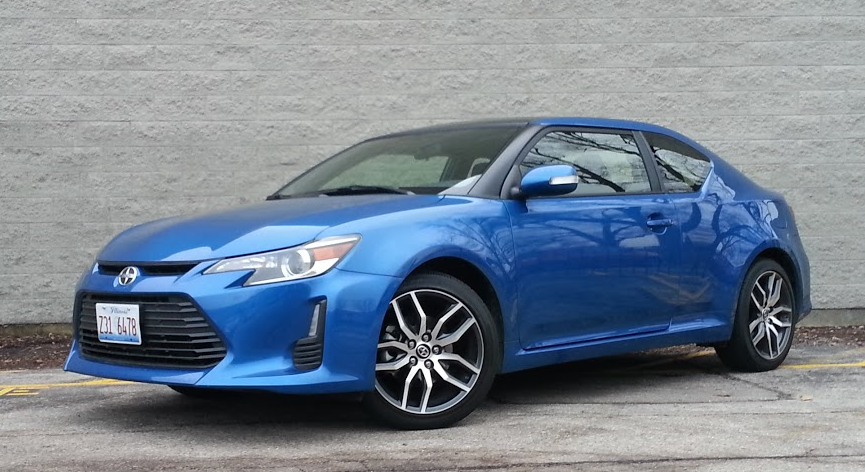 Although the host of features found on its window sticker might make it seem dressed to the teeth, our test tC started — and ended — at $21,330 including destination, as all those niceties came standard.

The great: Affordability, outstanding rear-seat and cargo space for a sporty coupe

The not so good: Rear-corner visibility, interior materials, engine noise

From the outside, the Scion tC is a feisty little pug of a car with its blocky coupe body styling, spider-legs 18-inch alloy wheels, and chrome-tipped exhaust. That pint-sized tough-guy look hides a secret, though. Inside, the tC is really a much humbler economy car. 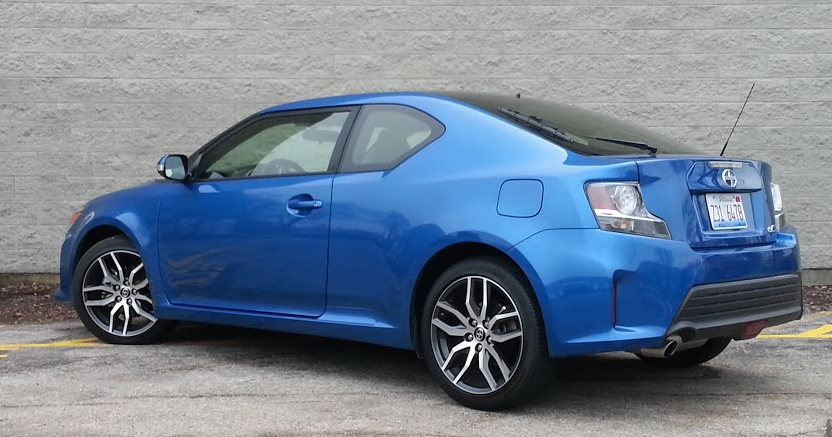 The tC’s squared-off roofline really aids rear-seat space and even cargo room, but those heavy rear pillars play havoc with visibility when backing.

There’s nothing wrong with that. Just because you don’t pay a lot for your car doesn’t mean the manufacturer has to sentence you to serve time in a cheerless cell on wheels. Unburdened by the addition of even one option, the 2016 tC that Consumer Guide® tested cost $20,535 (not counting the $795 delivery charge). For that amount, a buyer settles in on, shall we say, hardy cloth seats and is surrounded by expanses of unyielding black plastic. Personal-storage options are limited. Navigation? There’s this thing called a “map.”

All is not lost, though. The tC makes the most of what it has. That same buyer takes hold of a leather-covered flat-bottomed sport steering wheel with built-in audio buttons. Overhead is a two-piece panoramic glass moonroof. Body-color power exterior mirrors have integrated turn signals. Other standards include air conditioning, cruise control, a USB port, and Bluetooth telephone and music-streaming capability. Added touches for ’16 are an improved Pioneer audio system with a 7-inch touchscreen, “smart key” with push-button starting, a leather-trimmed shifter knob, and a rear-window wiper.

Another secret that the tC keeps is that it is also quite practical for its size—all the more so for being a hatchback coupe. Cargo space under the rear hatch is commendable, and the rear 60/40-split seats fold very nearly flat with no exposed gap from the flat cargo floor. There are open storage bins at the back corners of the cargo area, and the molded-plastic side walls are indented behind the wheel houses to create a little more room for long items laid crosswise. Under the cargo floor, trays that hold the tire-changing tools also have some small-item storage potential. 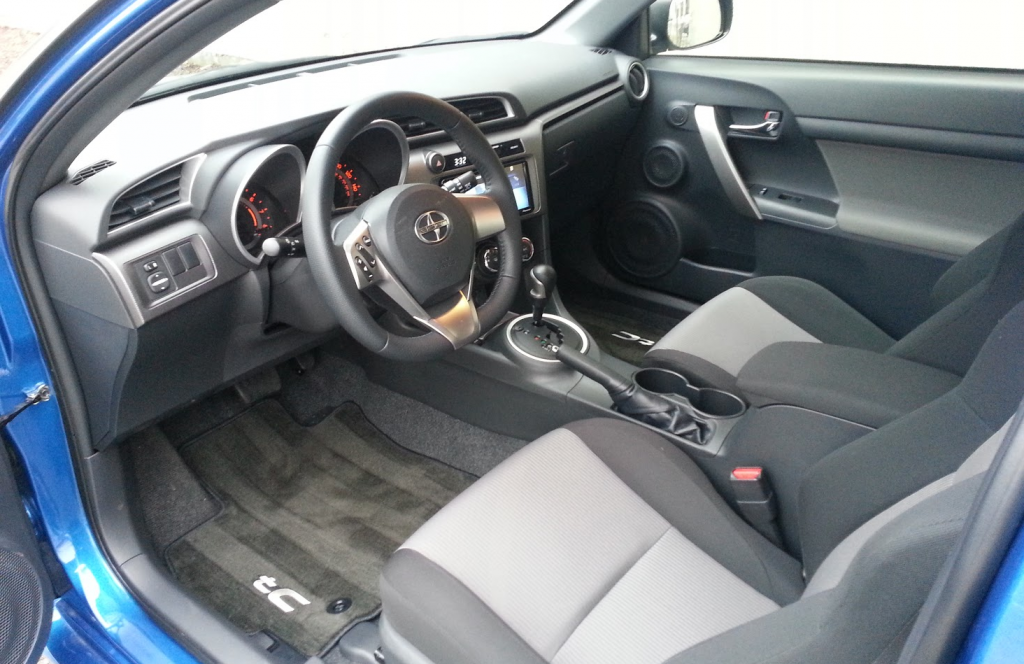 It doesn’t really look cheap, but few interior panels would pass a “tap test.” The audio and climate controls are refreshingly simple to use.

When the back seat isn’t being used as an extension of the trunk, it will honestly accommodate a couple of adults. The cushion may be a tad low, and head room is not especially ample despite a squared-off roofline, but this 5’10½” tester could slip beneath the top. The tC is no minuscule 2+2, so there’s acceptable leg room for anybody with the stature to fit under the roof. Then, too, rear-seat entry and exit are easier than in many other coupes. The front passenger seat moves far forward to help out here.

For personal items, there’s an average-sized glovebox, a small console box under a fabric-covered lid, and small door pockets that can double as bottle holders. A pair of open cup holders in the console serves front-seat occupants; rear passengers are presented with a cup holder molded into each side panel.

Almost everything involving the audio system has to be done via the screen, but using it is intuitive. Three rotating dials make quick work of operating the climate controls. Dials for the speedometer and tachometer are large, but their flaring orange graphics are hard to read at night when lighted.

Like the simple interior, the tC’s 2.5-liter dohc 4-cylinder engine also dispels the idea that this might be something more than fairly basic transportation. The 179-horsepower engine won’t leave you hanging out to dry on the highway, but it is a little rough and buzzy when pressed. CG’s test car came with a 6-speed automatic transmission that liked to let the engine wind on the expressway before kicking down. Steering-column shift paddles let drivers take matters into their own hands. As for fuel economy, this driver averaged 24.76 mpg in a 159.7-mile stint that included 40 percent city driving. EPA estimates for this powerteam are 23 mpg city, 31 highway, and 26 combined.

If any function of the car approaches the sporty end of the spectrum it’s the ride/ handling balance. There’s a firmness to the ride that some may find a little strident, but that is accompanied with good body control for quick rebound from bumps. The small footprint makes the car pretty maneuverable, and cornering lean is reined in well. This tester did reach the slender limits of the tC’s grip when hustling quickly down an on-ramp, the outside edge of which the car became eager to explore.

So the secret’s out: The Scion tC is a practical economy car—just one with enough flair to appeal to buyers who don’t want to drive an appliance.

John covered most of the bases here, but there are a few other things about the tC that bear mentioning — or at least, expanding upon.

In some ways, the tC strikes me as kind of “old school.” That’s not meant as the criticism it might seem (though I’m fairly certain it’s not what the youth-oriented brand had in mind). No lag-laden turbocharged engine or jerky dual-clutch automatic here; rather, just a large four cylinder that delivers the kind of off-the-line punch that most turbo engines can only dream about, and likewise impresses after the tried-and-true 6-speed automatic quickly slaps down a few gears when the pedal is prodded at speed. Also — bucking current trends — the control layout is refreshingly simple, and the surprising amount of passenger and cargo space indicate that styling clearly didn’t take a back seat to functionality. At least for the most part. That’s the good news.

Both rear-seat and cargo space are quite exceptional for a sporty compact coupe.

But not all is cheery in tC land. While visibility is good to the front and sides (due to thin and no pillars, respectively), those monolithic rear buttresses that are, I imagine, supposed to look sporty, mostly serve to block anything coming from the back corners — especially frightful when backing blindly out of a parking space. And if the world’s supply of padding suddenly runs short, no tC will have to go unbuilt because of it.

But the latter, at least, likely contributes to the fact that this spunky sportster can be had — with an automatic transmission, power moonroof, keyless access and starting, and slick-looking 18-inch alloys — for comfortably less than 22 grand. And that’s the kind of old-fashioned value that never really goes out of style.