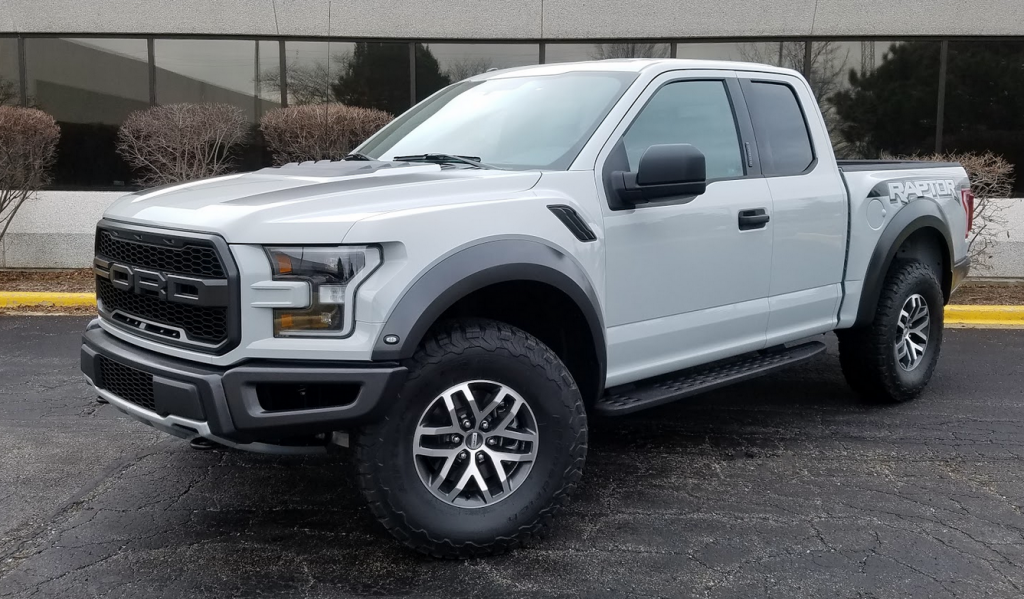 The good: Roomy and comfortable cabin

The not so good: Too big to easily negotiate tight spaces, fuel economy

At the top of the Ford F-150 Raptor’s steering-wheel rim sits a bright red stripe. It’s there so the driver can tell at a glance if the wheel is aligned straight in the 12 o’clock position, which is very useful if the Raptor’s front tires aren’t touching the ground. Wouldn’t want the pickup to lurch to the left or the right upon landing; that could be really bad.

If that steering-wheel alignment stripe doesn’t make you giggle like Beavis and Butthead at least a little bit, the Raptor is not the pickup for you. This is a truck that’s built to be throttled mercilessly over rough off-road terrain, and to occasionally get airborne. It’s about as close as you can get to purchasing a Baja-1000-conquering off-road race truck off of a dealership showroom floor. 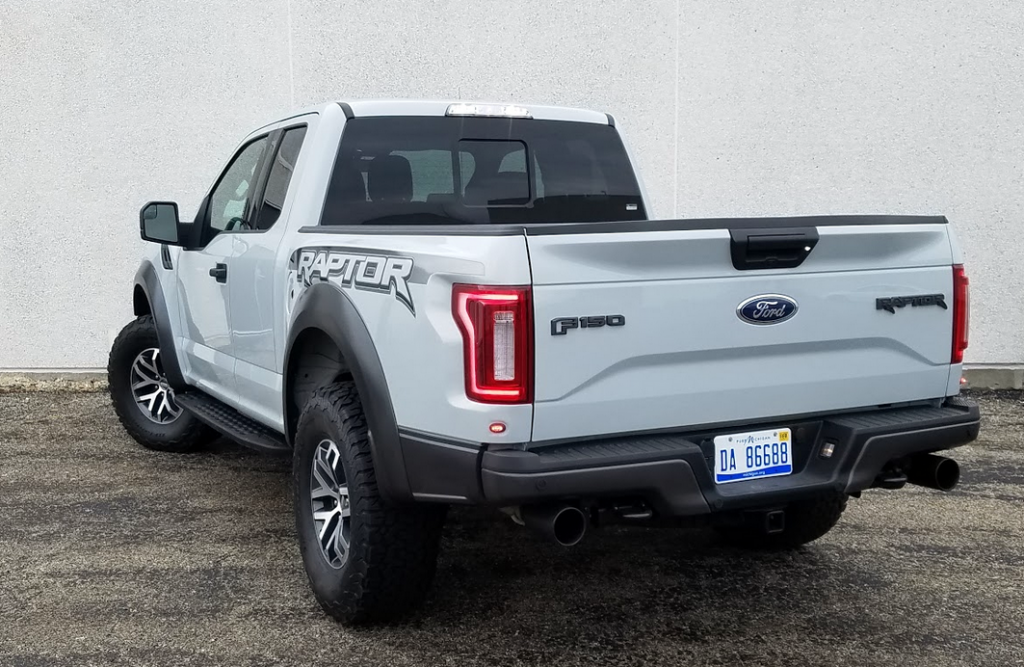 Even by full-size-pickup standards, the Raptor is a hefty vehicle. It’s so wide (86.3 inches maximum) that small marker lights (located on the front fender flares and below the taillights) are required by law. Parking this beast can be a challenge.

The new-for-2017 model kicks off the F-150 Raptor’s second generation. The original Raptor was produced from 2009 through 2014, ending its run when the all-new, aluminum-bodied F-150 was introduced for 2015. The second-gen Raptor switches from V8 to V6 power and, like its regular F-150 siblings, has weight-saving aluminum body panels that help it shed up to 500 pounds compared to the previous model.

The Raptor’s cabin is as roomy and comfortable as any Ford F-150’s, though the extra-tall step-in height can make entry and exit a chore. Several performance-themed trim elements help the Raptor stand out from other F-150s.

Some muscle-truck fans might decry the move to a V6, but the Raptor’s turbocharged 3.5-liter makes 450 horsepower and 510 pound-feet of torque—handily trumping the 411-hp/434-lb-ft rating of the first-gen Raptor’s 6.2-liter V8. The V6 is paired with a new, segment-first 10-speed automatic transmission that includes steering-wheel-mounted paddle shifters. The 4-wheel-drive system includes a Terrain Management System that calibrates engine, transmission, drivetrain, braking, and stability-control systems according to driver-selectable modes that include Normal, Weather, Mud and Sand, Baja, and Rock Crawl. 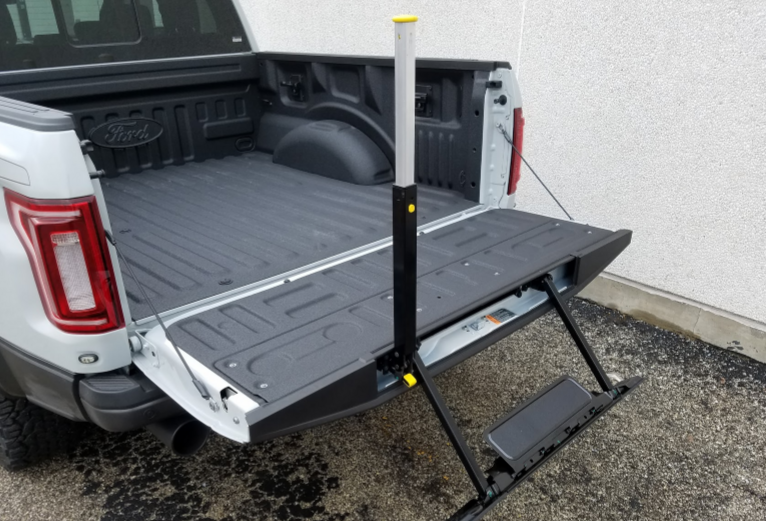 Chevrolet advertising has mocked Ford’s “man step,” but the optional ($375) Tailgate Step is actually very handy and easy to use.

The lighter curb weight and 10-speed transmission help improve fuel economy over the previous Raptor, but that’s not saying a lot—this is still a very thirsty vehicle. EPA ratings are 15 mpg city/18 mpg highway/16 mpg combined—and we only managed 13.6 mpg in a test that consisted of 85-percent city driving.

Ford boasts that the Raptor starts out below $50K ($48,325, to be exact), but you’ll have to look long and hard to find any option-free examples that are actually at that price level. Our test truck was decked out with a number of options, the priciest of which was the $3158 Equipment Group 801A—it adds leather upholstery, a 10-way power driver’s seat, power-adjustable pedals, power-sliding rear window, dual USB ports, and Ford’s Sync 3 infotainment system. All in, our Raptor bottom-lined at a cool $57,448. If I was looking to save money, the first options I’d nix are the $1075 exterior graphics package and the $900 hood graphics package. Almost two grand is a lot to pay for stickers, and the Raptor is conspicuous enough already—even in the understated, battleshipesque “Avalanche” light grey color of our tester.

Unfortunately, tight schedules meant that we couldn’t arrange to get our test Raptor out to any serious off-road terrain. We were confined to using it in everyday-grind urban commuting on suburban-Chicago surface streets and expressways, which is about as frustrating as driving a Lamborghini in bumper-to-bumper traffic. It took a fair amount of willpower for me to not jump the curb and go tearing across the playground, ripping up rooster tails of dirt and grass, after I dropped my kids off at school. 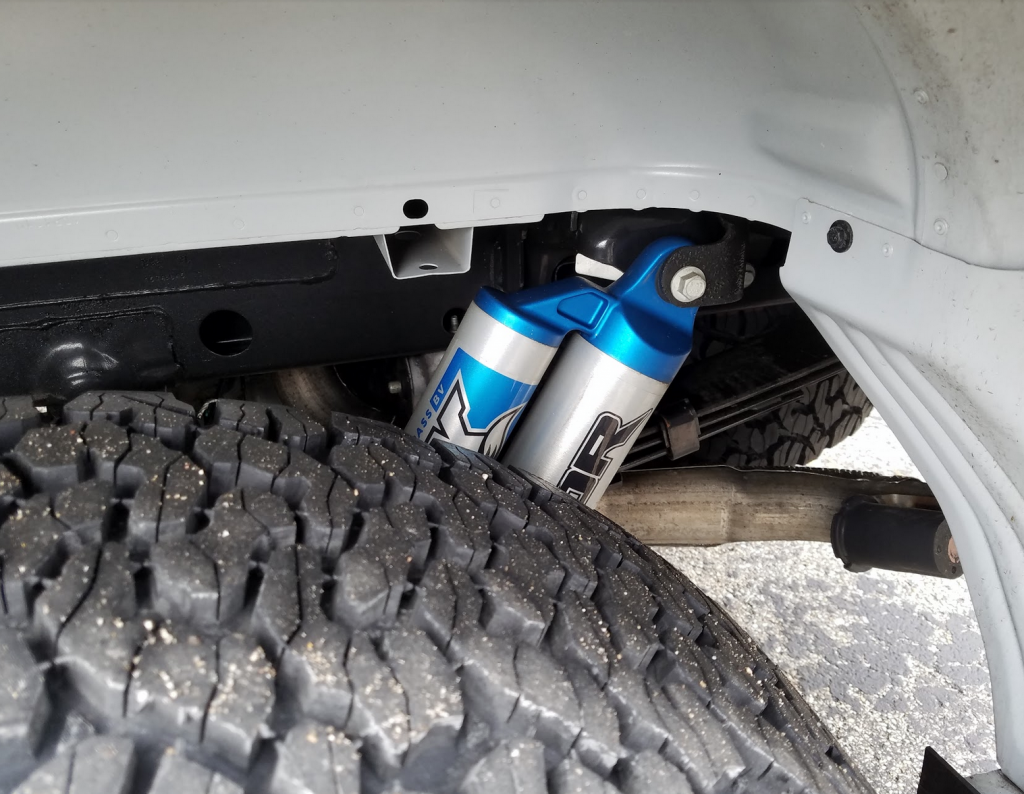 Just visible in the wheel wells are the Raptor’s Fox-brand high-performance shock absorbers.

Still, even with our less-than-ideal testing venues, we were able to get a sense of this truck’s one-of-a-kind capabilities. It’s startlingly fast for its size. It takes a bit to get this much mass in motion (the curb weight is more than 5600 pounds), but once under way the Raptor is incredibly quick and responsive. And, the roar from the powertrain at full throttle is like nothing else I’ve heard; there is no traditional-V8 rumble, and no high-pitched, sports-careque growl. The Raptor buzzes ominously at lower rpms, and emits a basso, industrial-sounding bellow in fast acceleration that is plenty aggressive.

We were impressed with the performance of the 10-speed transmission. We’ve tested a few 9-speed transmissions that sometimes seem to get caught “hunting” for the proper gear, but we noticed no such behavior here. Shifts are smooth and quick, and the standard steering-wheel-mounted paddle shifters work well to provide gearshifts on demand.

For the type of driving that most people do, the Raptor is ridiculously overbuilt. It’s so focused on hardcore off-roading that it is a bit compromised for everyday use. The Raptor’s sheer size—especially its width— can make it quite a handful in tight parking lots and the like. At 86.3 inches across, the Raptor is more than six inches wider than a regular F-150, which is not a petite vehicle to start with.

The Raptor’s standard tires—extra-knobby, 35-inch-tall BF Goodrich All-Terrain T/A K02s—have a lot of sidewall. They’re great for absorbing bumps and sharp impacts, not as great for stability in fast cornering. Likewise, the gigantic FOX-brand shocks (which were designed in partnership between FOX and Ford) are engineered to handle huge jolts from jump landings or jagged rocks, so they allow a bit more wallow than is ideal for optimal handling on the street.

The Raptor’s steep sticker price and copious thirst for fuel will keep most nonenthusiast shoppers away, so Raptor intenders will be aware of and accepting of this truck’s on-road shortcomings. If you think you might be in that demographic, the Raptor should more than live up to your expectations—provided you have access to the space and the terrain to fully exercise its remarkable capabilities.

The Raptor isn’t for everyone, but given its serious off-road capability, it’s surprisingly docile in normal driving.