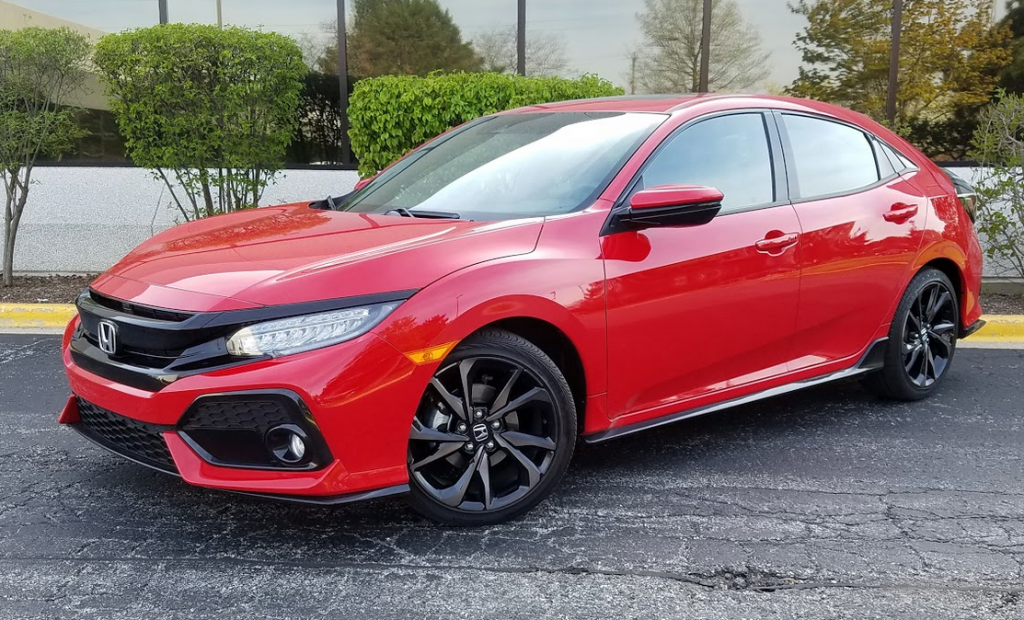 The not so good: No sporty Si model for hatchback

It took a while, but the latest-generation Honda Civic lineup is now in full bloom. The rollout started in the fall of 2015 with the redesigned Civic sedan, then progressed over the next couple years with the addition of the Civic Coupe, the Civic Hatchback (complete with exclusive Sport and Sport Touring models), the high-performance Si Coupe and Sedan, and finally the super-high-performance Type R hatchback. 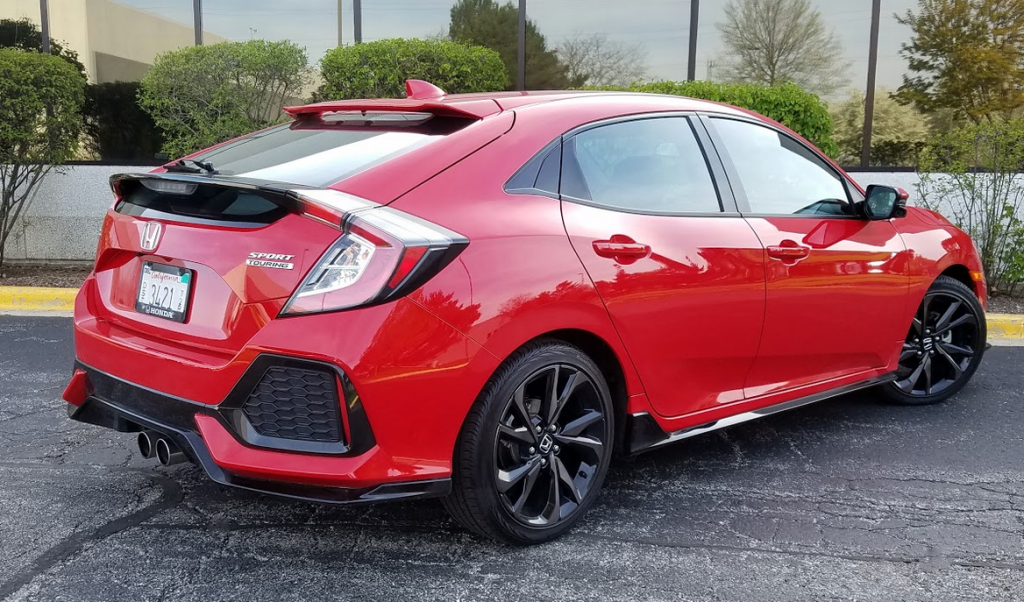 The Honda Civic Hatchback boasts plenty of aggressive styling add-ons that might be a bit too “boy racer” for some shoppers–especially in Sport or Sport Touring trim. Choosing an LX or EX model tones things down, but only slightly.

Of the three Honda Civic body styles, the hatchback is our personal favorite. In anything but Si trim, the sedan’s profile isn’t quite sporty enough for our tastes, and the coupe’s small trunk and cramped, hard-to-access rear seat mean it isn’t quite practical enough. The hatchback hits our Goldilocks just-right button; the hatchback body style is 4.3 inches shorter than its sedan sibling, which makes for sportier proportions, and its cargo-hauling superiority is obvious.

Honda’s designers and engineers are wizards when it comes to maximizing interior space, and the Civic Hatchback is a fine example of their prowess. Despite its fairly steeply sloped rear roofline, the hatchback’s cargo volume is quite spacious—25.7 cubic feet with the rear seats up (22.6 in the Sport models), and 46.2 cubic feet with the rear seat backs folded. Those rear-seat-up numbers are better than many compact-hatchback rivals, but the max volume number trails the class leaders—the Subaru Impreza hatchback, Volkswagen Golf, and redesigned-for-2018 Hyundai Elantra GT (all of which have upright rear body styling) respectively boast 55.3, 52.7, and 55.1 cubic feet of cargo volume with the rear seats folded down.

The Sport Touring hatchback offers 22.6 cu-ft of cargo space with the rear seat backs up, and 46.2 with them folded.

The layout of the Civic Hatchback’s cargo space is excellent, however. The load floor is large, low and flat, and the rear seat backs fold nearly flat with no “step” from the load floor itself. We especially liked the side-mounted sliding cargo cover, which negates the need for a cumbersome removable cross-bar cover. And despite that sharply sloped rear window, we didn’t have any serious issues with rear visibility.

The Sports also make a bit more horsepower than their Civic EX and LX siblings—180 hp, instead of 174. The manual-transmission Sport makes a bit more torque than its CVT counterparts as well—177 lb-ft, instead of 162. (The Sport is available with a 6-speed manual or CVT; Sport Tourings are CVT-only.) Essentially, the Civic Hatchback Sport and Sport Touring can be considered “Si-lite” Civics—they offer most of the sporty character of the Civic Si coupe and sedan, but with 25 less horsepower and slightly more supple suspension tuning.

Which brings us to one of our gripes: Honda doesn’t offer the hatchback body style in Si form (boo!), so the Sport or Sport Touring is as zippy as it gets unless you want to step all the way up to the $34,000, 306-hp Type R (which is available only as a hatchback). We suspect that this omission has something to do with production logistics; unlike the other U.S.-market Civics, the hatchbacks are built in Honda’s plant in Swindon, England.

We have a couple other minor grumbles too. All of the new Civics have a very low hip point for a mainstream compact car—this makes for a low-slung driving position which makes the Civic feel sportier than the average compact, but also makes for a deeper drop into the seats and a more tedious climb out. (Sigh—I must be getting old.) The Civic’s low-slung seats are especially noticeable in a world where higher-hip-point crossover SUVs seem to be taking over. And while I’m whining about ergonomics, I’ll also point out the Civic’s oft-maligned lack of a physical stereo-volume knob and the fact that my right elbow’s natural resting place is on the hardest, most uncomfortable part of the sliding center console cover.

Quibbles aside, our Civic Hatchback Sport Touring tester was a delight to drive. The exterior styling is spicy, the interior has a sporty, upscale feel, the engine is willing and zingy even when paired with a CVT, and the balance of ride quality and cornering agility is ideal for our tastes. Plus, we achieved laudable fuel-economy numbers (as we have in all the new-generation Civics we’ve tested). All of the Honda Civic’s numerous permutations are fine cars, but this one is one of the best of the bunch.

The 2017 Honda Civic Hatchback is our favorite Civic body style. It offers sporty, fastback-esque styling akin to the Civic Coupe, and delivers even better cargo versatility than the Civic sedan–best-of-both-worlds appeal.