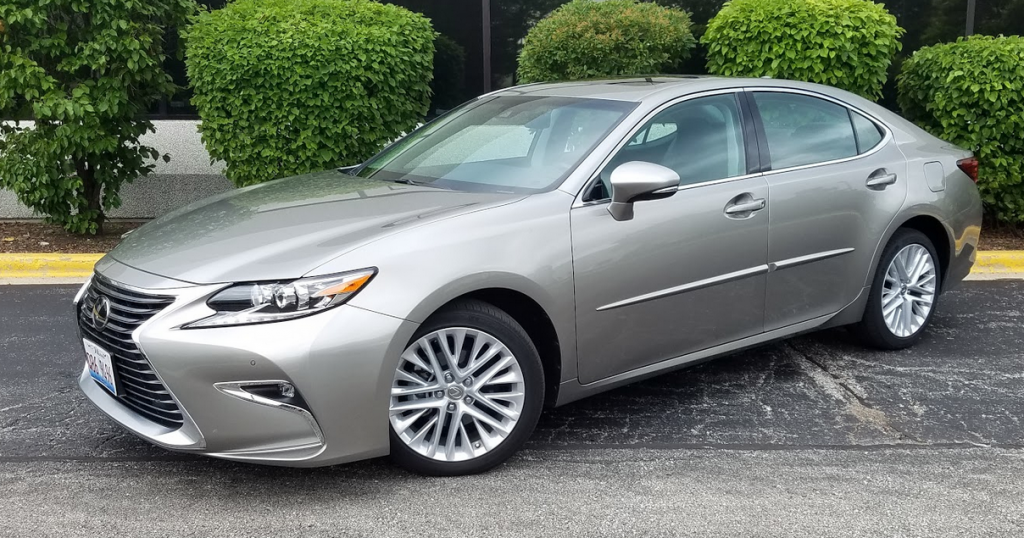 The not so good: Driving dynamics aren’t as engaging as most class rivals

The “safe” choice in the premium-midsize-car category gets a little safer for 2017. That would be the quiet, buttoned-down, “excitement is for the excitable” Lexus ES, which adds the brand’s Safety System + suite of electronic alerts and helpers as standard equipment. 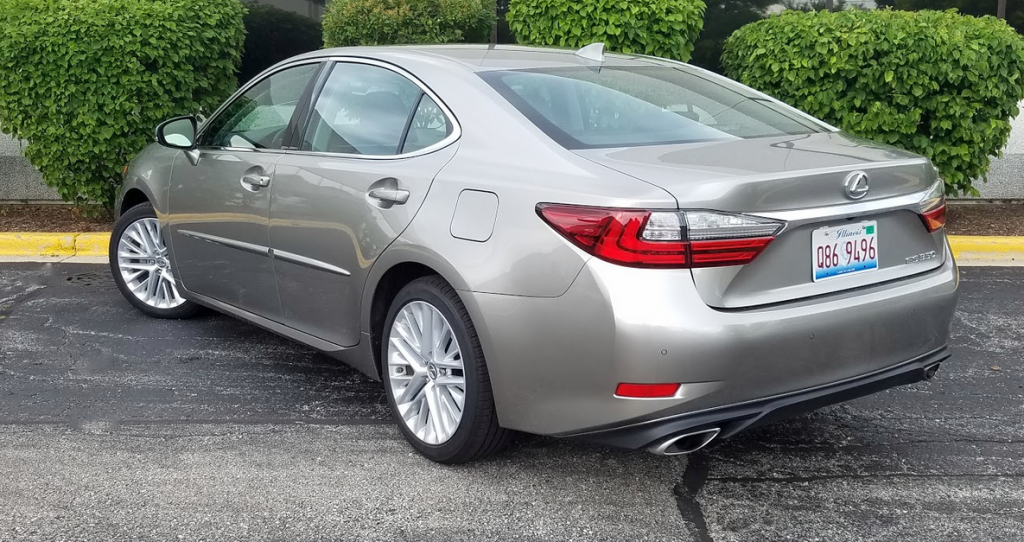 The ES 350 comes standard with 17-inch wheels, but our tester wore the optional $880 high-gloss-finish 18-inchers.

There’s nothing too alarming or polarizing about the front-wheel-drive ES cars like the 350 that CG editors tested—that is if you’re not put off by Lexus’ signature “spindle” grille design. If you prefer a midsize Lexus with more sport-sedan grit you can find it in the rear-drive GS. Meanwhile, the ES trades in a tranquil cabin, cushy ride, and a manageable price for the segment—and it’s subject to the customer care that has won Lexus a strong following in the luxury class. So, yes, the ES is a safe choice on several levels.

The ES 350’s cabin is a textbook example of pleasant, understated luxury. The materials and assembly quality are high quality. A wood and leather trimmed steering wheel is a $300 option.

The ES350’s powerteam—a 3.5-liter dohc V6 engine and electronically controlled 6-speed automatic transmission—is also unaltered. The smooth engine makes a “sufficient” 268 horsepower, and it works well with the transmission, which kicks down promptly for secure highway passing. Like so many other vehicles these days, the ES350 tries to be lots of things at once with its standard Drive Mode Select system. A twist of a console-mounted dial summons “Eco” or “Sport” alternatives to the default “Normal” setting. Eco moderates throttle response, power output, and climate settings to achieve better fuel economy, and there certainly is a change in driving feel. Sport is intended to deliver more aggressive throttle behavior and firmed-up steering, but the effect is minimal. 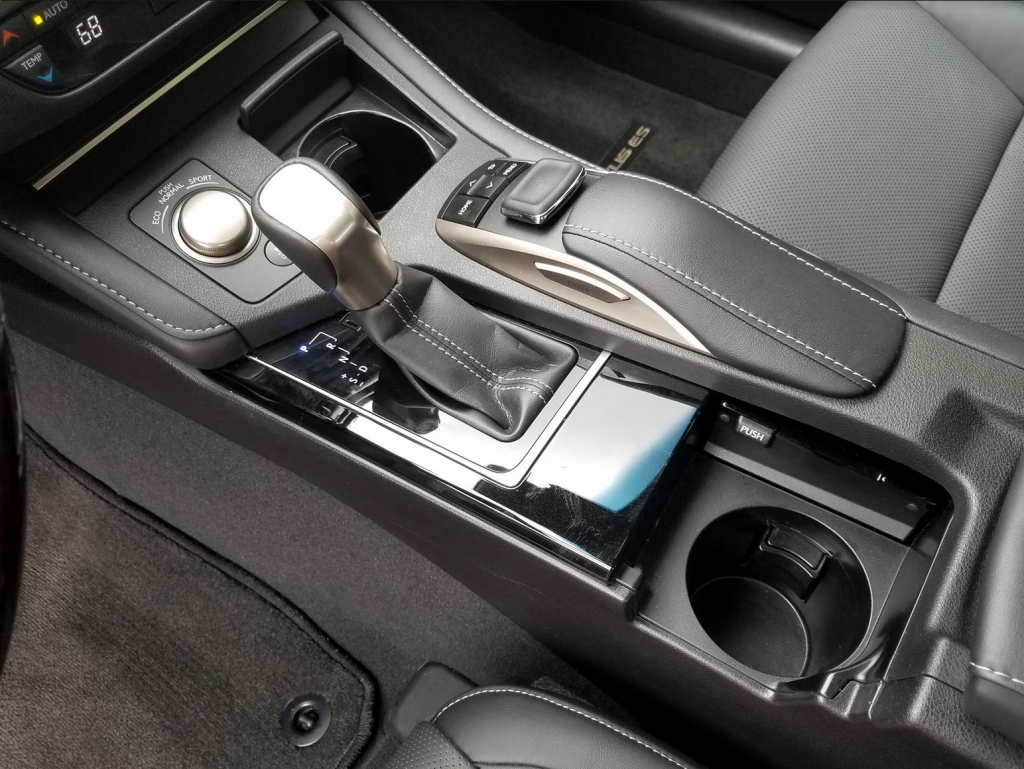 Not all of our testers are fans of the Lexus Remote Touch interface; it takes up a good chunk of console space and can divert the driver’s attention from the road.

EPA fuel-mileage estimates for the 350 are 21 mpg in the city, 30 mpg on the highway, and 24 in combined driving. Driving primarily in Normal mode, this tester saw 22.61 mpg after covering 186.9 miles, with 67 percent of miles in city driving conditions.

There’s nothing but comfort and ease to the ride and handling of the fully independent suspension. The test car was equipped with 18-inch alloy wheels in place of the standard 17-inch rims but this had no appreciable negative effect on ride comfort.

In the last couple of years the ES has added LED headlights and a rearview camera to its complement of standard equipment. Other major built-in features include push-button starting, Enform Safety Connect (with emergency-assistance contact, stolen-vehicle locator, etc.), automatic headlights, 10-way power front seats, electrochromic heated exterior mirrors, power moonroof, automatic dual-zone climate control, 8-speaker audio system, satellite radio, and Bluetooth connectivity. With this year’s new safety features, the starting tab is up to $38,900, with another $975 due for shipping.

CG’s test car topped out at $45,083 with a stack of nine options—two of which were multifeature packages. One added an upgraded Mark Levinson audio system, navigation, and Enform app suite. The other contributed memory settings for the driver’s seat, steering wheel, and mirrors; power tilt-and-telescoping steering wheel; wood interior trim; and remote keyless entry.

For the most part, driving controls are easy to see and use. Audio and navigation displays appear on an 8-inch color screen. Both of these systems—and others—are manipulated through Lexus’ console-mounted Remote Touch device, which inevitably draws some of the driver’s attention from the road to the screen to make sure the mouselike controller is finding the desired zone on the screen. For what it’s worth, Remote Touch adds a “back” button for 2017. Independent climate controls are adjusted via an array of large buttons low on the dash. They can be reached quickly without distraction but some—notably temperature settings—are repetitive-push buttons that would give better service as dials. 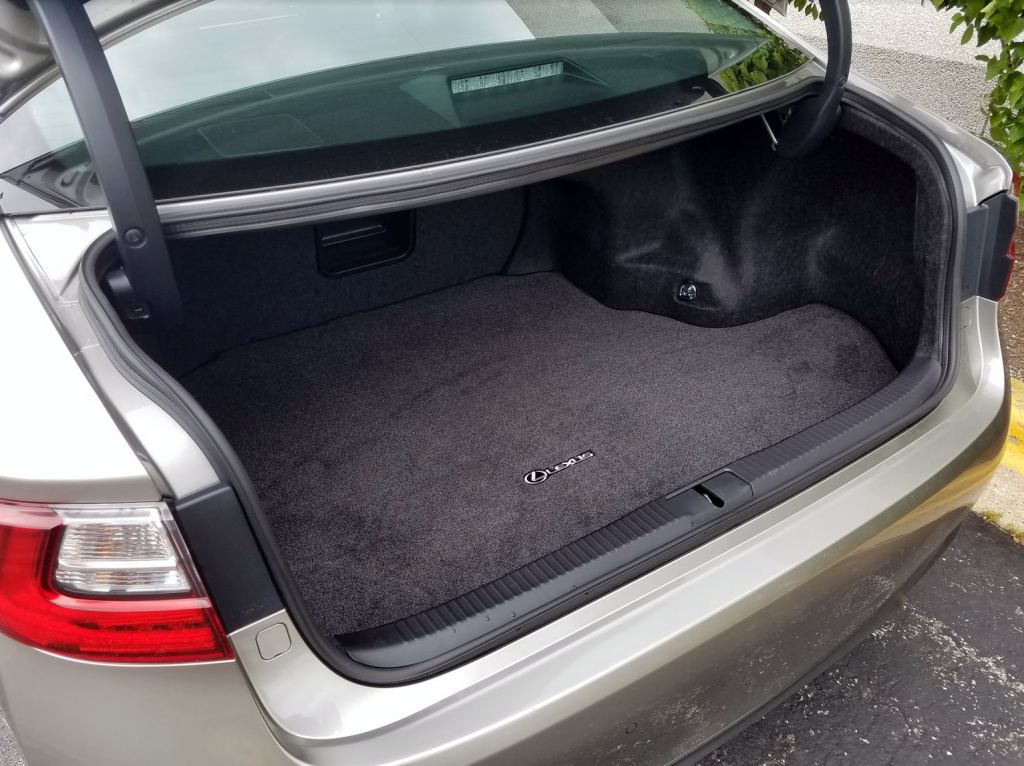 The ES’s trunk offers a decent 15.2 cubic feet of cargo room, but the rear seat backs don’t fold; there is only a small cargo pass-through.

Front leg- and headroom are ample on comfortable and supportive cloth-faced seats. (Leather upholstery is an extra-cost item.) The back seat features lots of legroom, though slightly less headroom than in front. An extremely low floor tunnel opens up legitimate space for an adult middle passenger in back—though he or she can’t be too tall. Soft-touch surfaces extend far down the dash and door panels. Driver vision suffers a bit to the rear corners but otherwise offers few limitations.

Front storage consists of door pockets; a large glove box that unfortunately sees most of its interior taken up by owner’s manuals; two covered cup holders in the console; and a large covered console box with an adjustable tray, a power point, and digital-device inputs. Rear storage is handled by pull-out pouches on the backs of the front seats and dual cup holders in the pull-down center armrest. A 120-volt power port is built into the back of the console near floor level. Though the load floor narrows between the wheel houses, trunk space remains plentiful—even if a high lip complicates loading and unloading. Rear seats don’t fold, but a central pass-through for long objects is provided.

The ES350 is a good starting point for a midsize luxury sedan, but it’s up to the buyers to make of it what they will based on the options and packages they choose. Pricewise, that’s how Lexus plays it safe.

The Lexus ES is one of the cars I find myself recommending most to folks looking for simple, unchallenging luxury. The premium-car basics are all here: power, refinement, quietness, and space. All that’s missing from the ES is a sporting nature, but for many luxury shoppers, sportiness isn’t on the wish list.

If you’re looking for a luxury ride and don’t care about cornering prowess or a burbling exhaust note, the ES deserves a place on your short list. And at under $50,000 well equipped, the ES is something of a bargain as well.

In both side profile and driving demeanor, the 2017 Lexus ES 350 has a less-sporting attitude than many of its class rivals, but its serene ride, cushy cabin, and strong dollar value make it a popular choice nonetheless.