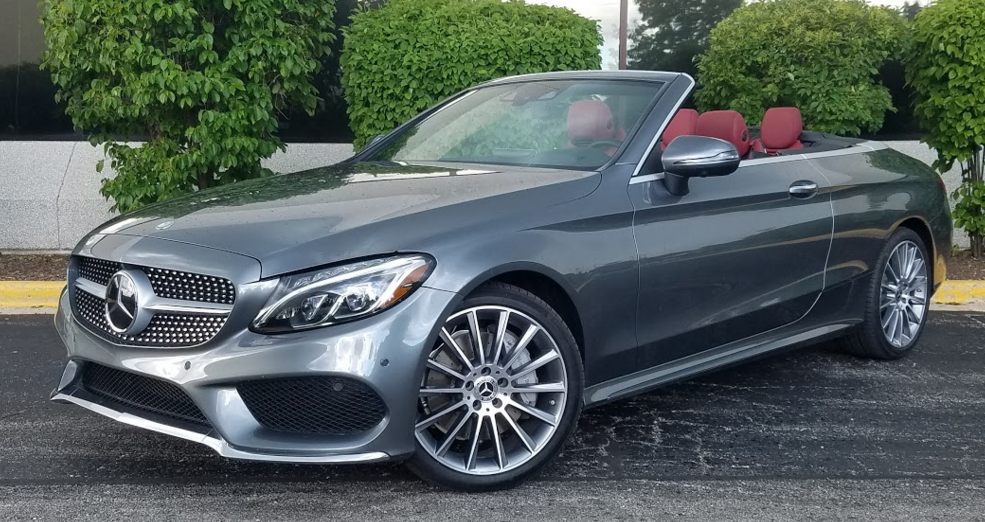 It has always surprised me that there aren’t more all-wheel-drive convertibles on offer. For those of us stuck in the snow belt, the joy of top-down driving is too often paid for a few months later with poor traction on slippery surfaces — which are encountered all too frequently — essentially turning your beloved ragtop into a “three season” car.

Far as we’re concerned, there is no better time to enjoy a top-down drive than during a beautiful sunset, which can be comfortable even in chillier temps thanks to the C300 Cabrio’s AIRSCARF and AIRCAP features.

So right off the bat, the C300 4Matic Cabrio was scoring points, combining as it does terrific wind-in-your-hair appeal with capable all-wheel-drive abilities. As it’s very similar in most other regards to the C300 Coupe reported on previously, I’ll focus on its open-air aspects here.

While power-folding hardtops were all the rage awhile back, most manufacturers have returned to traditional soft tops in recent years. And in cars like the C300, those soft tops are so nicely insulated that top-up travel is almost as serene as in a comparable coupe. Furthermore, the huge rear-quarter blind spots some soft tops suffer aren’t really a problem here, something that’s further aided by a 180-degree rearview camera and 360-degree Surround View System, the latter part of the optional $1090 Parking Assist Package. 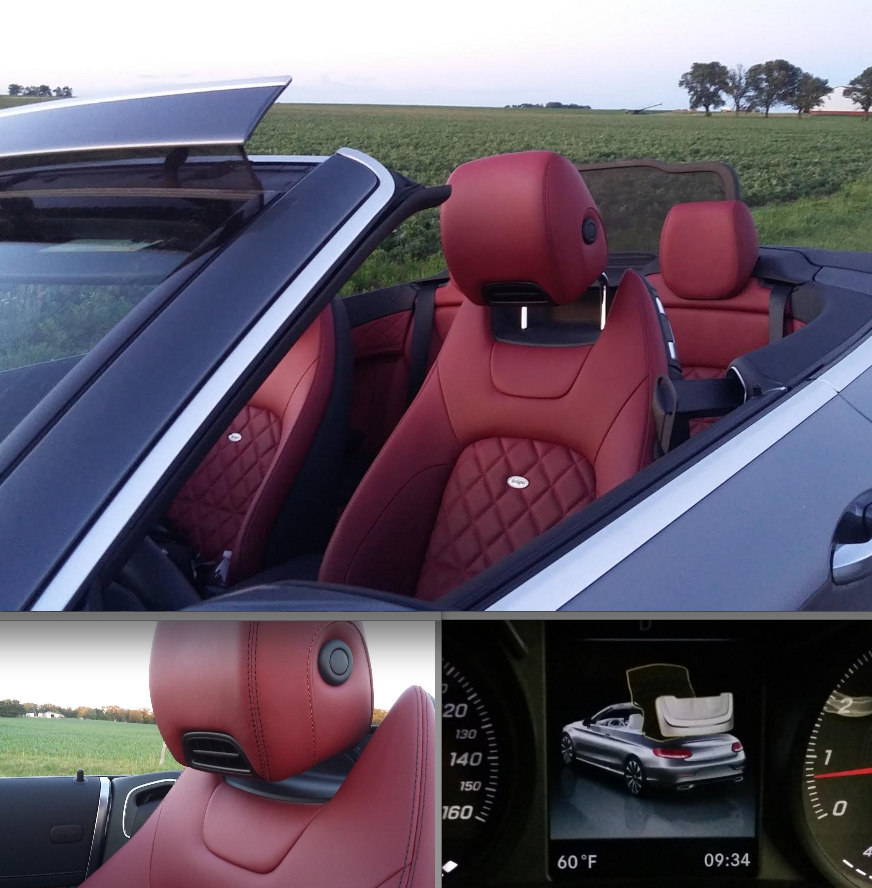 Clockwise from top: The AIRCAP option includes a tilt-up windshield “spoiler” and rear mesh screen that limit wind buffeting at speed. The progress of opening or closing the top can be viewed via an animated graphic in the center instrument cluster. The standard AIRSCARF feature blows warm air on the back of your neck, a real benefit in cooler temperatures.

During my evening top-down drive, the ambient temperature dipped into the low 60s. While that can be uncomfortably cold in a convertible, two features of the C300 helped make it perfectly palatable. The first was the standard AIRSCARF, essentially an electric heater/fan contained in the front-seat headrests that blows warm air on the back of your neck. The second was Mercedes’ AIRCAP, a combination of a tiltable “spoiler” atop the windshield header and a mesh windscreen that raises up behind the rear seat, both serving to cut the draft that normally buffets the interior at speed. However, AIRCAP was part of our test car’s $6900 Premium 3 Package, which also includes a navigation system, high-end audio system, adaptive headlights with automatic high beams, blind-spot and rear-cross-traffic alert, lane-keep assist, adaptive cruise control, and a few other items.

One oddity noticed while top-down driving was that the unused shoulder belts flapped in the breeze, with the front one banging against the inner body panel. The latter problem was fixed by buckling the belt, but there was still some “flutter” coming from the rear belts, which could probably be quelled by doing the same. 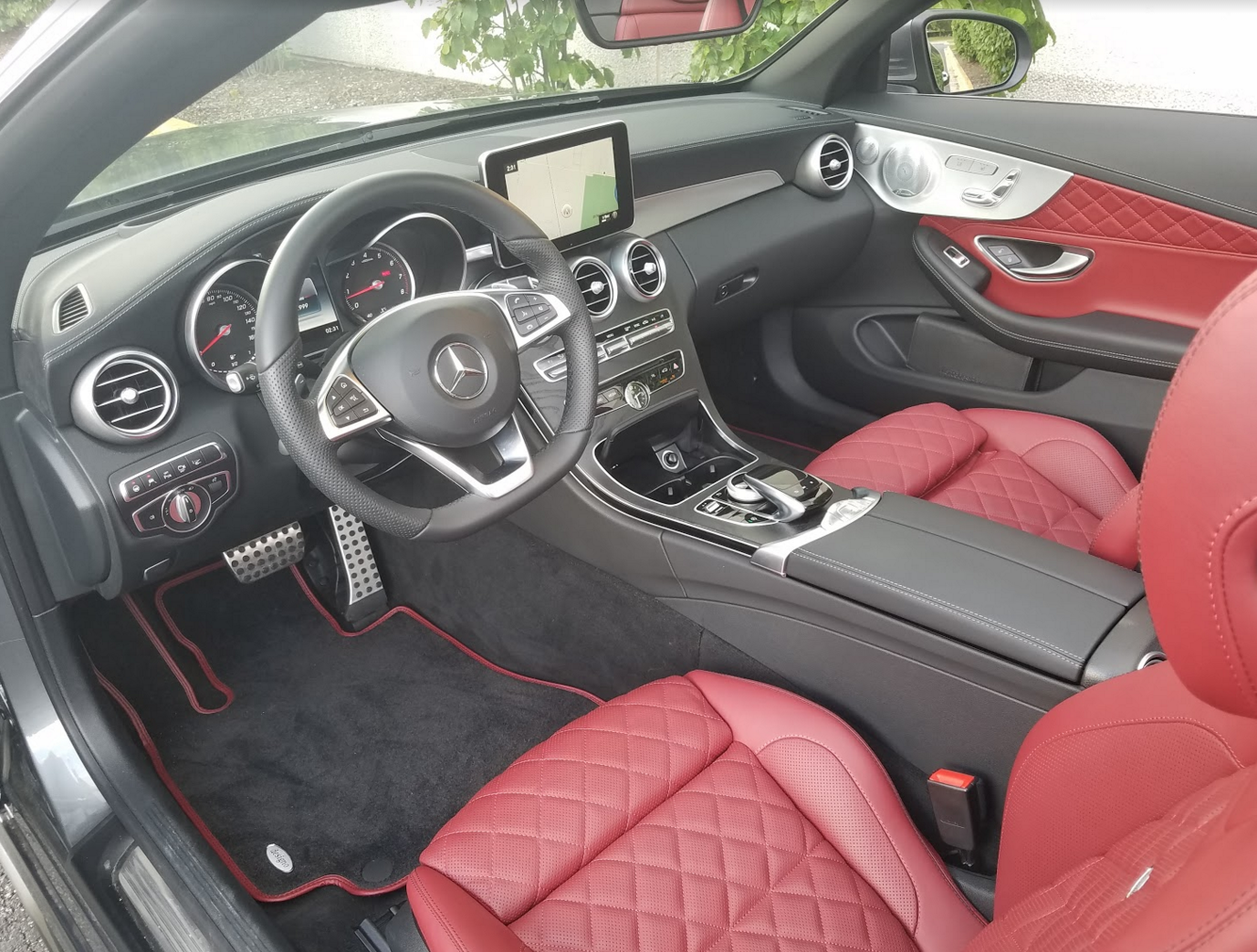 Our test car was fitted with Bengal Red upholstery, which really sets off the stately, nicely appointed interior.

As the soft top folds into the trunk, cargo volume is affected, even when the top is up. According to Mercedes, the Coupe trunk has a capacity of 10.5 cu. ft., the Cabrio, 8.8 cu. ft. — and that’s with the top up. A “shelf” drops down that partitions off the area needed for the folded top, and that leaves only a small (though wide) amount of space toward the rear of the car, with just a “slot” beneath the shelf (though there’s also a bit of hidden storage space beneath the floor). The rear seat backs fold, allowing longer items to be carried–but the opening isn’t very large, there’s a 2-inch step up from the trunk floor, and though the seat-back releases are in the trunk, you have to execute a very awkward reach inside the car to flip the seat backs up.

While some other aspects of the C300 might give one pause — most notably the cumbersome infotainment and climate controls — the Cabrio combines the pleasures of open-air motoring with all-season traction, commendable dynamics, and Mercedes cachet to become one very attractive ride. 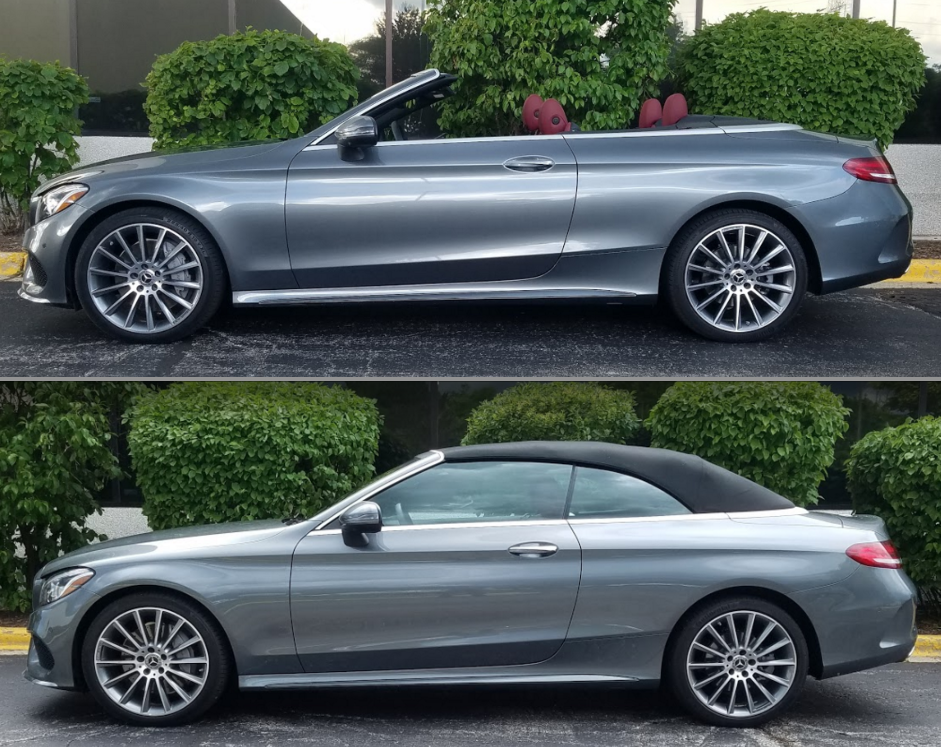 Top up or down, the C300 Cabrio strikes a dashing profile that — thanks to its 4Matic all-wheel drive — can be shown off all year round. Our tester’s 19-inch AMG multi-spoke alloy wheels are a $500 option.