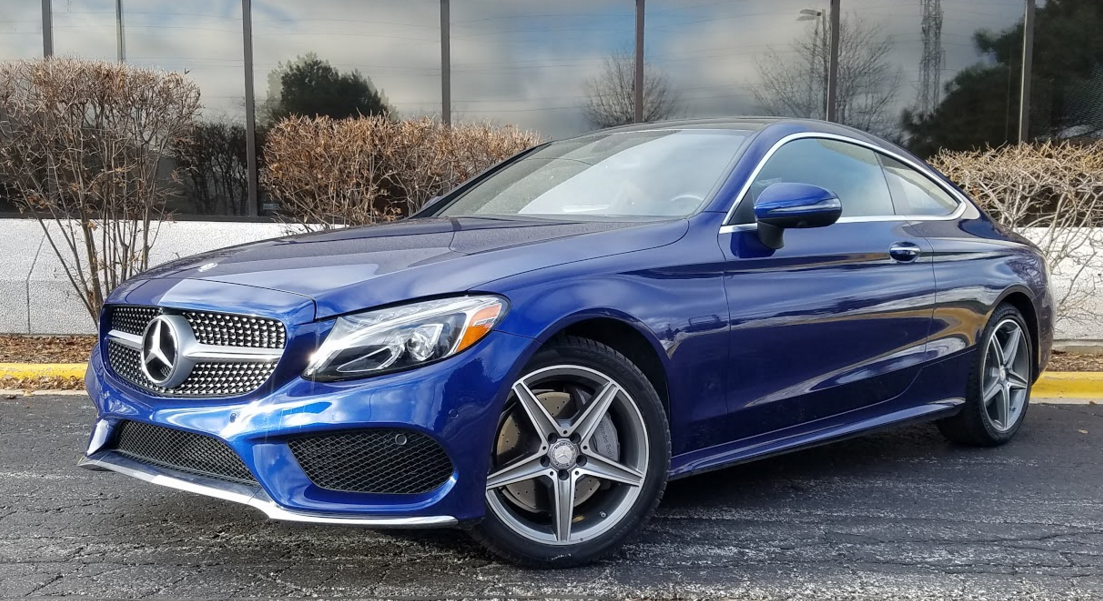 The good: Powertrain performance, cargo space (for a coupe)

The not so good: Rear-seat room, some tedious-to-use controls, some expected features are optional 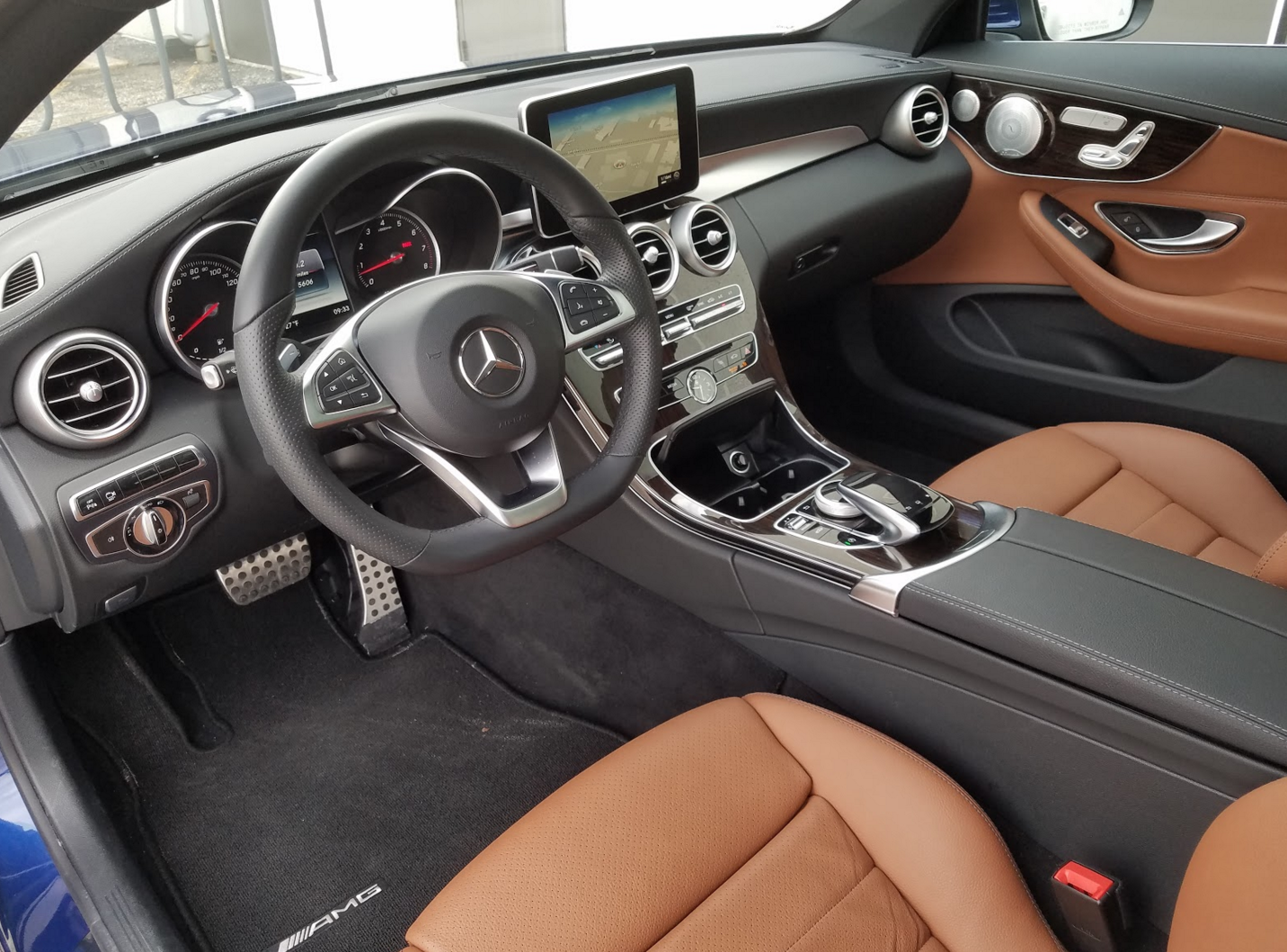 Optional leather upholstery ($1620) is required if you want heated and cooled front seats, but especially in our tester’s black/brown combination, it further dressed up an already classy interior.

The coupe that returns to the Mercedes-Benz C-Class lineup for 2017 starts out stylish enough right out of the box. Making it sportier or truly luxurious takes some doing—and some cash.

However, leather upholstery, wood trim, navigation, heated and cooled seats, satellite radio, head-up display, a premium Burmester audio system, dual-zone climate control, a rearview camera, various surrounding-traffic monitors, and a WiFi hotspot are some of the things that cost extra. So do uprated brakes and a sport-tuned suspension. Many of these items are bundled into option packages—one of which costs $7860—but others are stand-alones. (Even that biggest option group doesn’t come with leather or the wood trim, for instance.) You have to figure that anyone who wants an M-B surely wants at least some of the things on that extra-cost list, so the neighborhood of $50K seems a likely destination for most of these cars. 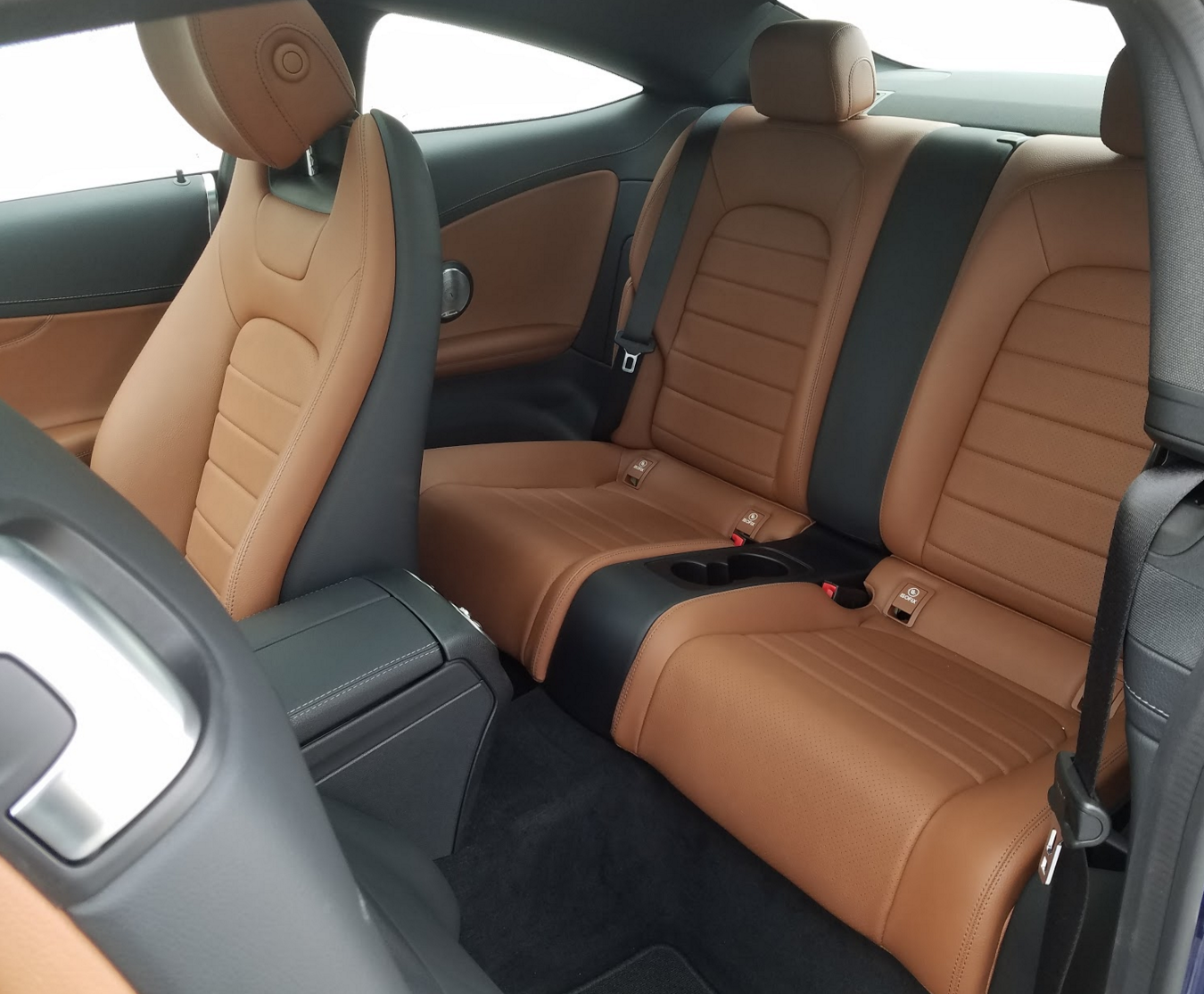 The rear seat is only for kids or smaller adults, and even then, only if the person in front is under about 6′ tall.

What makes this kind of expenditure a little harder to swallow is the limited passenger and cargo utility of the coupe body style. The C300 is a compact, after all. Rear seating is limited to two passengers, and even then they dare not be too tall or rangy. This 5’-10.5” reviewer had to slouch a little to clear the sexy roof slope, a process complicated by a fairly upright seating position. Legroom is none too generous either. (Maximum rear legroom is 10 inches shorter than the same dimension in front.) The 10.5-cubic-foot trunk is easy to load and will hold a week’s worth of groceries for two, but not much else—though there is some underfloor space for small items. Rear seats fold in a 40/20/40 split (the middle section can be deployed as a long-item pass-through) but they don’t lay especially flat.

The best places to appreciate the C300 are from the outside and behind the wheel. It’s easy on the eyes and satisfying to drive.

The turbo four produces 241 horsepower at 5500 rpm but generates 273 lb-ft of torque between 1300 and 4000 revs. It’s not supercar output by any means but it is enough for strong getaway and easy cruising, even in the “Comfort” setting in the Dynamic Select menu. Toggling up to “Sport” modifies engine performance, steering, and suspension response, and “Sport+” further tweaks the powerteam and damping. Sport+ keeps the transmission in gear longer to squeeze more power from each range, and the engine clearly feels stronger this way. Stomps of the pedal in this mode sound off with a sporty burble, and trans kickdown is quick—but smooth—on the highway. 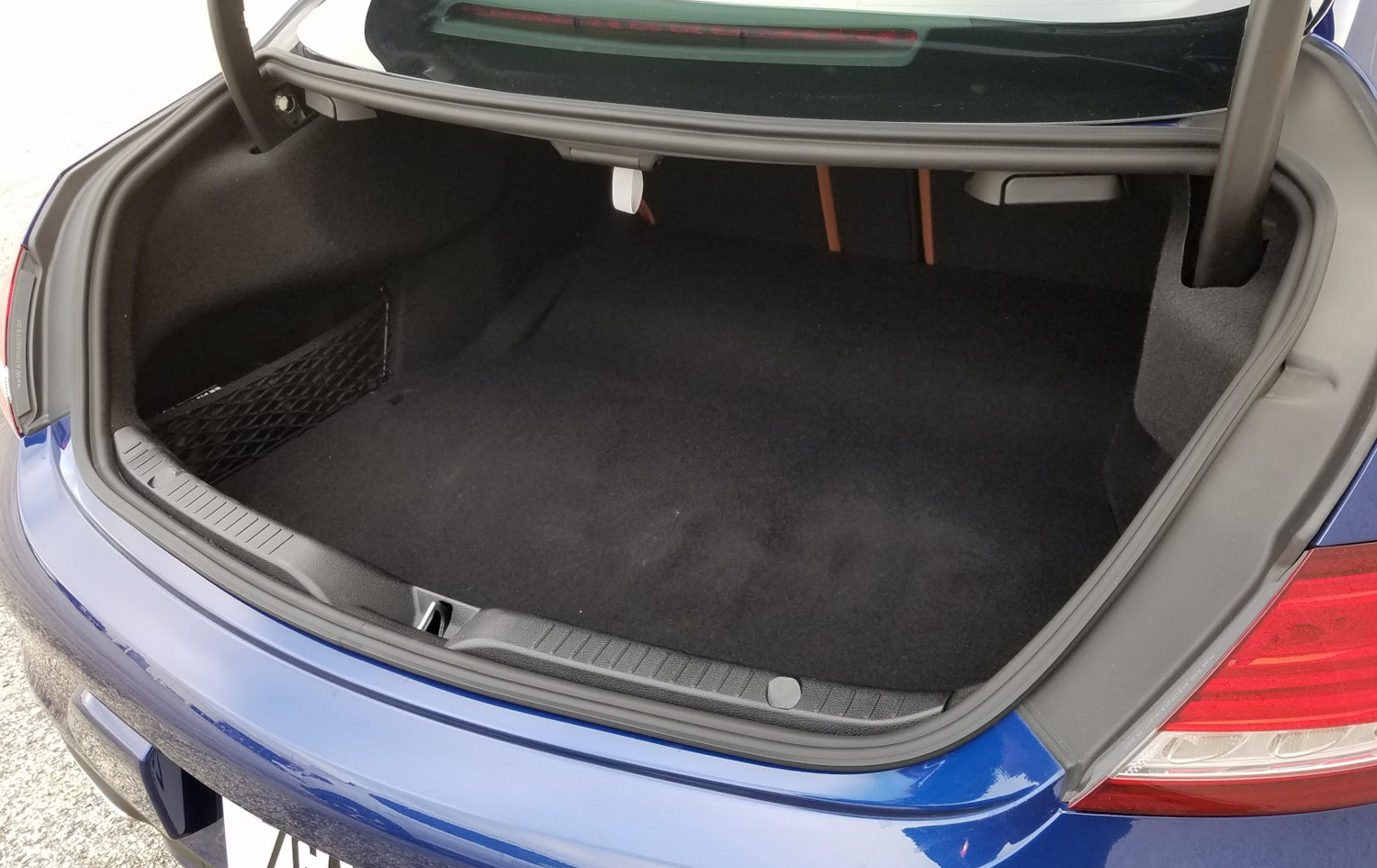 Trunk space is reasonable for a coupe, and there’s a good amount of additional space under the floor. Rear seat backs fold level with the cargo floor, but it’s awkward to reach in through the cabin to raise or lower them.

There is some attention paid to fuel economy. A fairly unobtrusive stop/start system to save gas while idling is standard. (It can be switched off, and it is not active in Sport+.) There’s also an “ECO” drive mode that tones down engine performance and alters climate-system operation to nurse fuel. EPA mileage estimates are 23 mpg in the city and 30 on the highway. In a small sample (about 66 miles, 45 percent of which was in city driving) this tester averaged just 19.18 mpg, most often in Comfort mode and only briefly in ECO.

Outfitted with the Sport Package, which includes the tuned suspension and cross-ventilated brake rotors in addition to some cosmetic items, the test car rode and handled wonderfully. In Comfort or ECO mode the ride is wonderfully compliant. Dialing up Sport+ definitely makes for a firmer ride. Surface imperfections are hard to miss in this setting, but the sacrifice for this feedback is less than you might expect. Stopping power starts early in the brake pedal’s travel and hauls down this nearly 3800-pound car in good order.

The arrow-shaped console controller (bottom) has a built-in touchscreen on top, with a volume “roller” knob to the top right. Those and a couple console buttons are the only way to adjust all infotainment functions, as the large dashtop screen is not a touchscreen.

The generously optioned test car showed off a polished interior. Soft surfaces were seemingly everywhere anyone might want them to be. MB-Tex pseudo leather with contrast stitching—a Sport Package feature—covered the top of the dash. When the backrests are tilted, the comfortable and supportive front seats power forward automatically to give some aid to rear-seat entry or exit. Personal storage has some quirks. When the glove box is open, the curved lid is somewhat in the way. The console box has a split top with hinges on either side; these “wings” obscure the view into the box and require users to reach over them. A covered bin at the front of the console conceals a pair of cup holders. There are long pockets in the doors and a small net pouch on the passenger side of the transmission tunnel. Rear-seat occupants have exposed cup holders between the seats, and small open bins in the sidewalls.

Main driving controls are well placed and easy to read. A central controller on the console makes selections for audio, navigation, and other systems. It’s not hard to figure out the drill for making audio settings through the controller, but there are too many taps and twists of this device necessary to select and save stations. The test car was outfitted with a touchpad control that is sensitive to pinches, swipes, and even handwriting, but its position—it looms over the central-control dial—makes it easy to brush a hand over it and inadvertently change what’s on the screen. A bank of toggle switches in the center stack manages climate controls separately.

Certainly space-per-dollar is not the C300 coupe’s strong suit. For that you’d be better served by the sedan. However, it is an attractive and stirring-to-drive alternative in a segment in which coupes are rare.

Before you’re lured in by the C300 Coupe’s svelte profile — something that’s easy to be — note that it brings with it some required sacrifices.

John mentioned that his 5’10 1/2 frame didn’t fit in the back seat very well. As my 5’9 one barely did, that’s probably the practical limit — and only if the seat ahead isn’t pushed far back, as I had barely enough legroom to squeeze in behind my own front-seat setting. (Thus, if the front-seaters are more than 6′ tall, this is essentially a 2-seat coupe.) It’s also a real chore to get out through the low, small opening left after the front seat powers forward ever-so-slowly, and — as in most coupes — that long door requires lots of room beside it to open far enough to get out of either row, meaning parking-lot spaces should be carefully chosen. 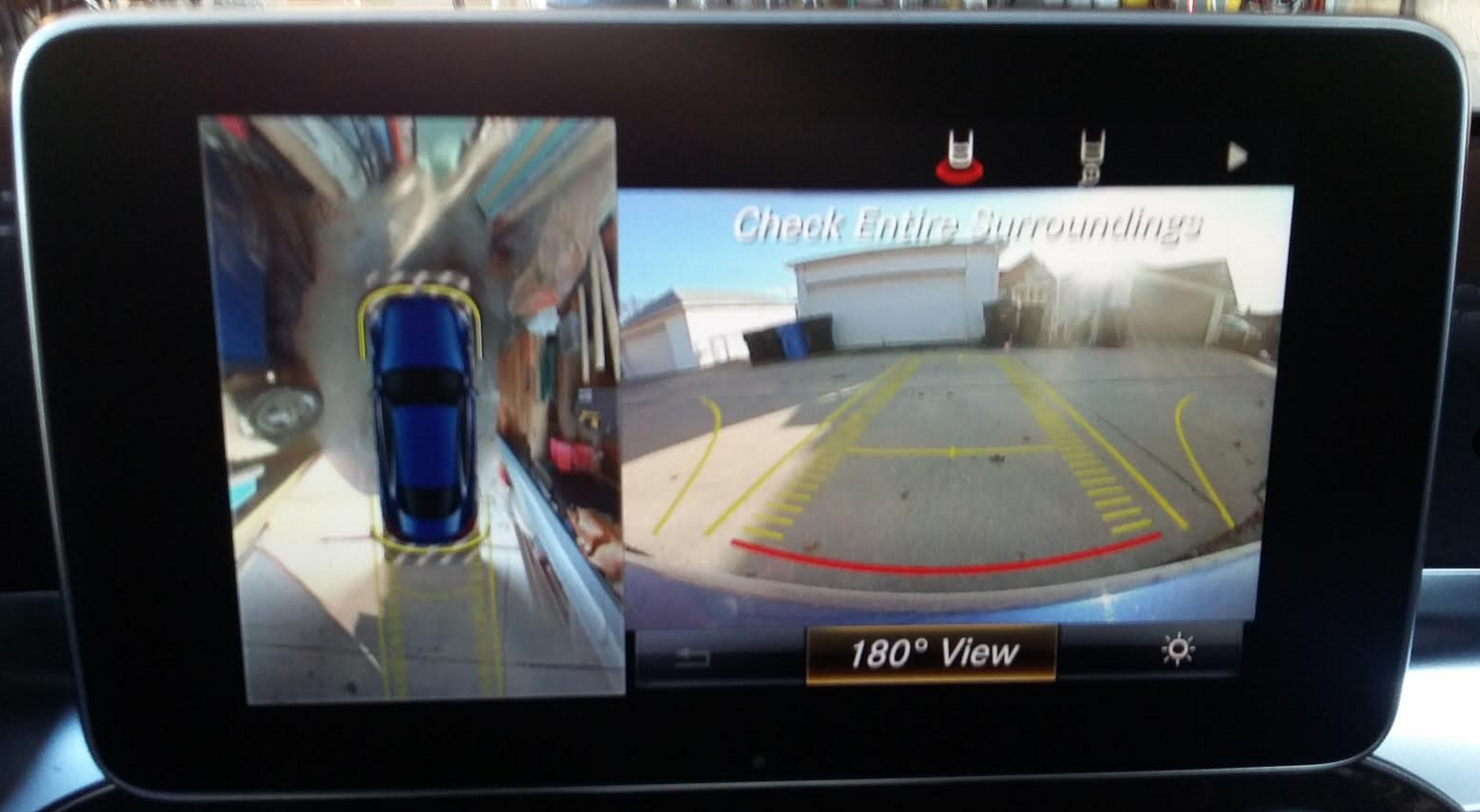 When backing, the dash screen can display both a 180-degree rear view and a 360-degree “birds eye” view side-by-side.

Visibility is quite good thanks to relatively thin front pillars, set-back side pillars (resulting in a fine over-the-shoulder view), and modest rear pillars. Furthermore, the dash screen can show both a 180-degree view and a “tighter” 360-degree view side-by-side, which makes backing easier. Oddly, the sunvisor, when swung to the side, doesn’t extend, leaving the whole back half of the window uncovered.

There are a few other sacrifices as well, but they have nothing to do with being a coupe — and much to do with the car’s rather confounding control layout.

Peek-a-boo! If you can’t find the cruise-control stalk (as I couldn’t), just turn the wheel a bit; it’s hidden behind the left spoke.

The 8-inch dash screen is not a touchscreen, so all commands are executed through a “roller” volume knob, large control knob, and a little touchscreen on top of the knob, all located on the console. Adjustments become easier with practice, but many still take too many steps to execute. Climate controls are all tedious repetitive-step flippers (though they’re within easy reach), and it took me a while to find the cruise-control stalk, which is hidden behind the left steering-wheel spoke when the wheel is in the straight-ahead position (as it would be on the highway), and the stalk’s controls aren’t lit at night.

Considering that motivation comes from a little 2.0-liter turbo four, the C300 feels satisfyingly spunky. My 0-60 times averaged a respectable 6.6 seconds, and there was but a touch of turbo lag when flooring the throttle from a stop. While John felt the stop/start system was unobtrusive, there were times — such as in creeping stop-and-go traffic — when it seemed to engage with an unseemly shudder. It can be deactivated with a console button, but you have to do it every time you start the car.

Without question, the C300 Coupe has its charms — visually and dynamically — with the optional all-wheel drive making those charms easy to appreciate in any weather. And though it suffers some for the indulgence, this is undoubtedly one classy coupe. 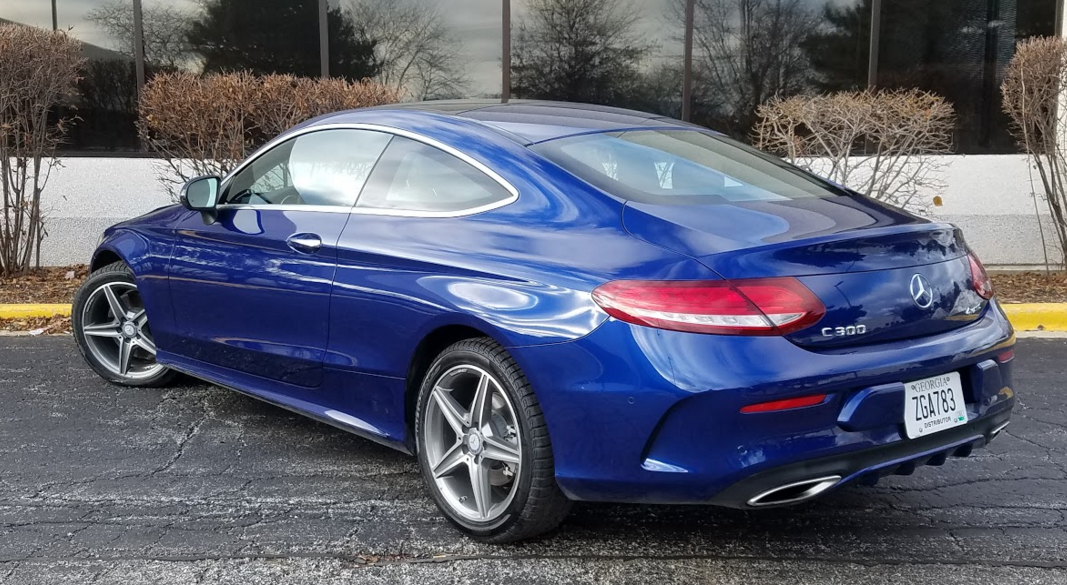 It’s hard to argue that a coupe is more visually appealing than a sedan, but it forces some sacrifices in rear-seat and truck space, along with ease of entry and exit. If those don’t concern you, the C300 4Matic Coupe is a beauty you can drive all year ’round.