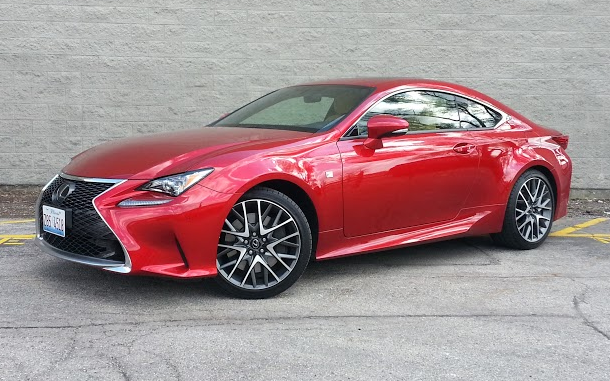 The great: Classy and comfortable cabin

The not so good: Less powerful than many sporty coupe shoppers might want

Some cars are thoroughbreds. Some cars are workhorses. The Lexus RC 200t, which introduces a turbocharged 2.0-liter engine to this family of premium sporty/performance coupes for 2016, is a show pony. While it has most of the looks and moves of its V6 and V8 stable mates, it’s obvious that the 200t isn’t eating from as deep a bag of oats. 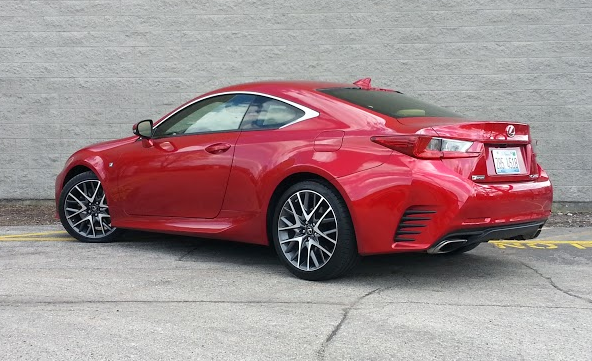 Rated at 241 horsepower and 258 lbs-ft of torque, the 200t starts at a natural disadvantage relative to the 3.5-liter-V6 and 5.0-liter-V8 models in the RC catalog. Lexus pegs the turbo car’s 0-60-mph time at 7.3 seconds—1.7 seconds slower than the rear-wheel-drive RC 350 and a good 2.9 ticks behind the 467-horse RC F. But where a lot of modern turbo-four cars (many with the same 2.0-liter displacement) trade ultimate power for sprightly response with a side order of commendable fuel economy, the four-banger RC doesn’t quite deliver that level of fun. Off-the-line grunt is warm, not hot. The same goes when clamping down on the highway when a burst of passing power seems to be in order. 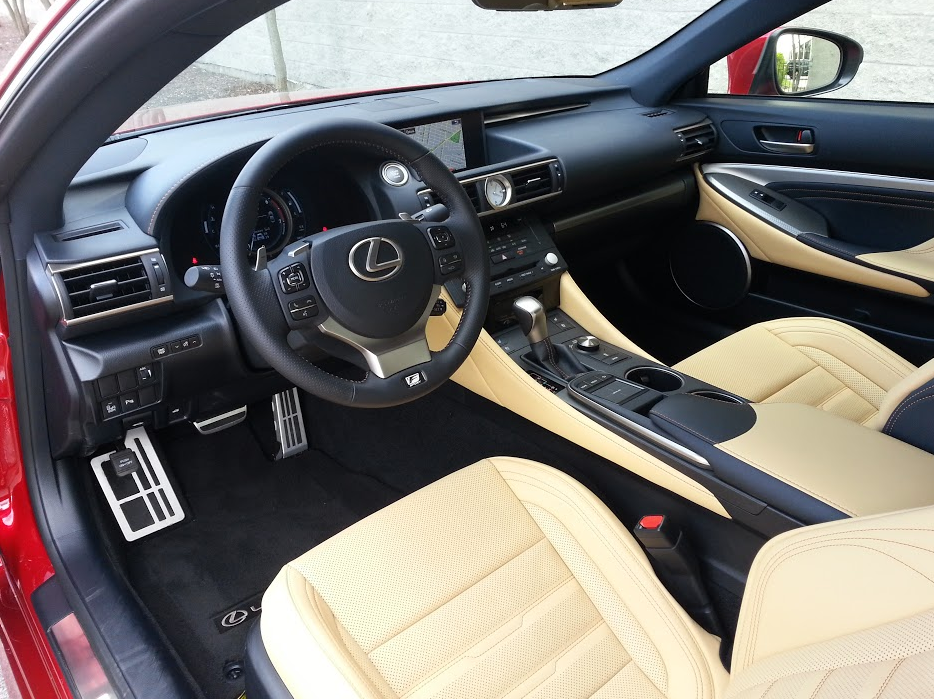 The RC’s inviting cabin is surprisingly roomy up front, though headroom can be an issue for occupants over 6 feet tall.

As do all other rear-drive RCs, the 200t has an eight-speed automatic transmission, and standard Drive Mode Select that is operated through a console-mounted selector dial. The “Normal” mode plays things down the middle; “ECO” tempers throttle response, power output, and climate settings in pursuit of better fuel economy; and “Sport” and “Sport S+” are calibrated for quicker throttle response (plus modified steering and suspension behavior in S+). The difference in driving behavior is certainly palpable, but it’s still not enough to turn the RC 200t into a pavement predator. Running mostly in Normal or Sport during a 129-mile tour in Consumer Guide®’s test 200t, this driver averaged 21.4 mpg with 65 percent city-type driving. That came up a little short of the car’s EPA city rating of 22 mpg, but was almost four mpg better than what he saw from an RC 350 in 2015.

In other respects, the 200t and the 350 look and feel pretty much the same, despite a $2785 starting-price premium for the latter. Ride is nicely composed—and definitely less firm than in the high-performance RC F. Braking is sure and prompt. Steering response is quick, and slightly crisper still with Sport S+ engaged.

Inside, front-seat occupants sit in firm, grippy seats, and enjoy decent head and legroom. Rear-seat passengers are less fortunate—and probably considerably smaller, otherwise they won’t really fit in the first place. Soft-touch material is distributed liberally throughout the cabin. For storage, the console box isn’t all that deep, and it contains ports for electronic devices. The glove box isn’t overly roomy, but there are long pockets in both doors. While not tall, the trunk is flat and wide, and will hold a bit more than minimal luggage for two. 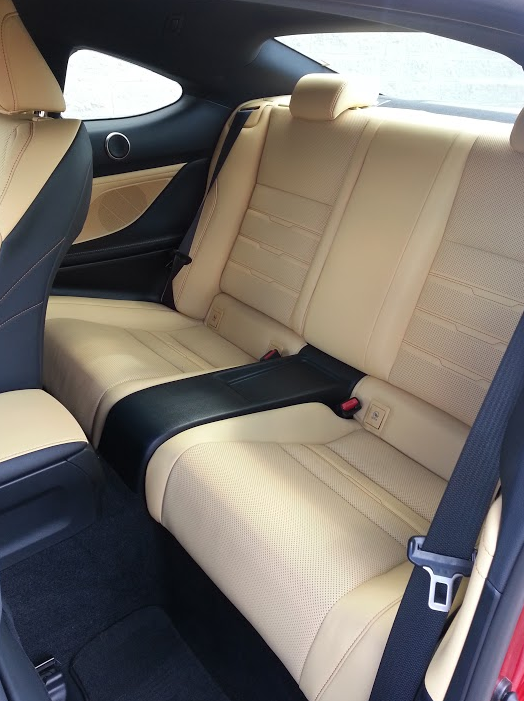 Even though it’s cramped by most standards, the RC’s rear-seat will accommodate teens and smaller adults better than most sporty coupes.

The test car also came with a group that added an enhanced Mark Levinson 17-speaker audio unit; voice-activated navigation system; an app suite that includes apps such as Pandora, Bing, Yelp, and iHeartRadio; and a console-mounted touchpad controller. This last item has pinch and swipe capability for adjusting audio, climate, and other systems that register on a color screen in the instrument panel. While not this reviewer’s favorite part of a Lexus, he’ll grudgingly admit that the touchpad gets more intuitive with use. Still, it’s not totally without attention-diverting quirks, and it’s extremely easy to casually rest part of a hand on the pad, which starts moving things on the display screen that a driver may not want moved.

With four more stand-alone options and the delivery charge, the RC200t that CG sampled reached $50,345. Overall that’s probably not bad for a premium grand touring coupe, but in this case that’s without leather upholstery or sufficient punch from the powertrain. Does the 200t’s $40,000-ish starting price make the RC’s show pony that much more worthwhile? Neigh.

The RC 200t rides, handles, and feels, just as you would expect a Lexus sporty coupe would. That said, I’m not sure the 4-cylinder engine works in this car. For my money, I would pony up the additional $3000—and give up four mpg—and go with the V6-powered RC 350.

For a sporty coupe, the RC offers surprising rear-seat passenger space. While no adult would want to spend protracted periods of time back there, I was able to squeeze my two teenage daughters into the second row—both of whom reported finding the seat comfortable. Entry and exit are a bit complicated, but that’s the nature of the coupe beast. 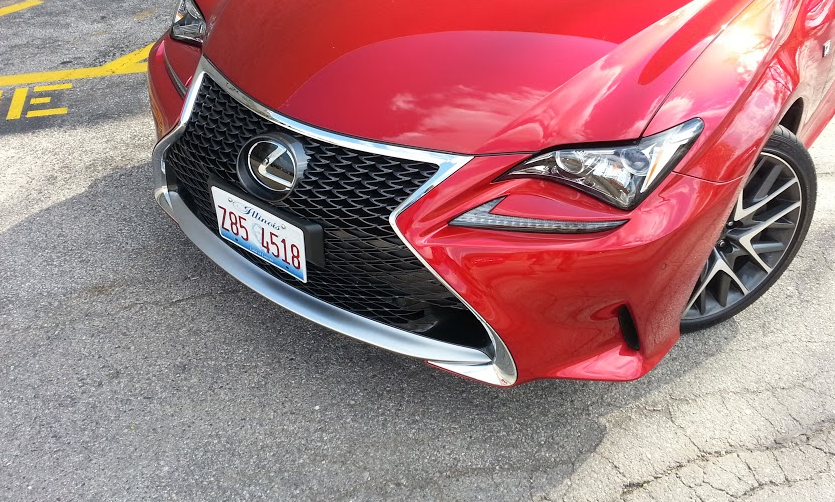 The once-shocking “spindle” grille is now seen linewide in Lexus showrooms. While hardly elegant, the striking grille seems to be working well in helping Lexus create a visual brand identity.