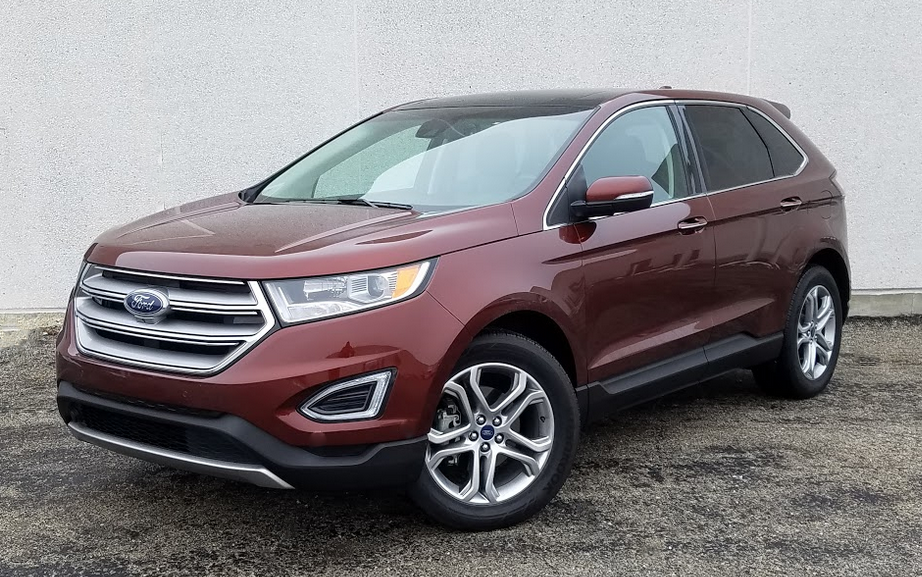 The not so good: Steep option-group prices

The same, only better—is there such a thing?

Could be. That’s what it seemed like to this reviewer when driving a 2016 Ford Edge Titanium just about a year after trying out a 2015 version of the same vehicle. 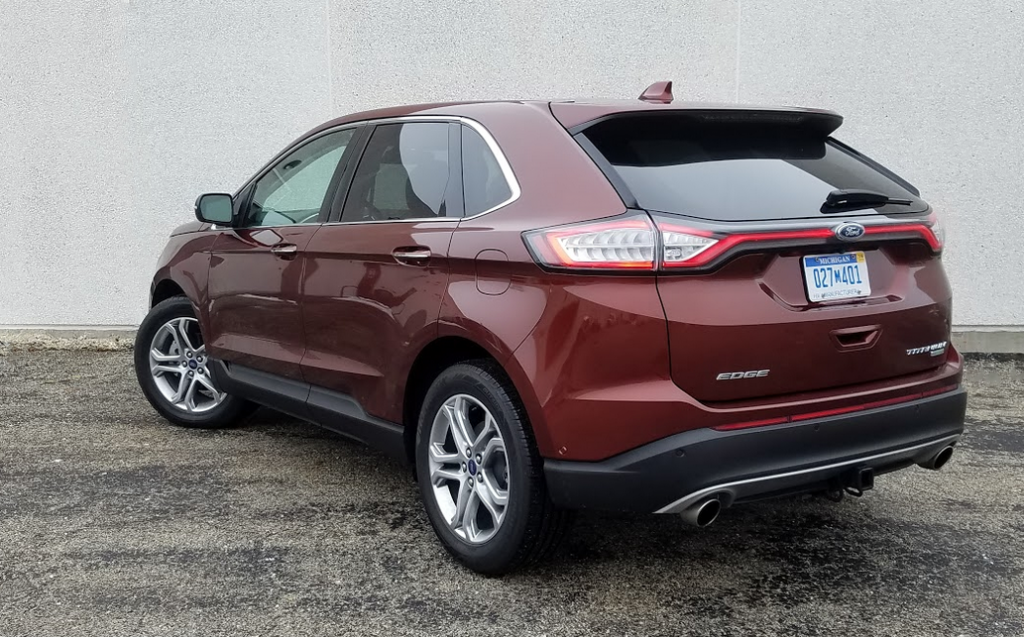 Ford’s midsize crossover SUV was redesigned for ’15, so the current model was destined to remain very much the same. However, among the few alterations that were made was a switch to the SYNC3 infotainment interface in place of the never-quite-right MyFord Touch media controller. Audio, climate, phone, and other services are a quick tap away on a bright 8-inch touchscreen with smartphone-like swipe and pinch capability. Setting and accessing audio presents was direct and uncomplicated—better, you could say.

There’s plenty of space for four occupants in Edge, which does not offer a 3rd-row seat.

Apart from paint and upholstery colors, about the only other thing that separated Consumer Guide®’s 2016 Edge Platinum tester from the ’15 job was the drivetrain. In place of all-wheel drive, this year’s example came with front-wheel drive, which comes $1995 cheaper than AWD running gear. Without any adverse road conditions during his stint, this driver got around just fine pulled along by just the front wheels. One somewhat exuberant throttle squashing induced a hint of torque steer. 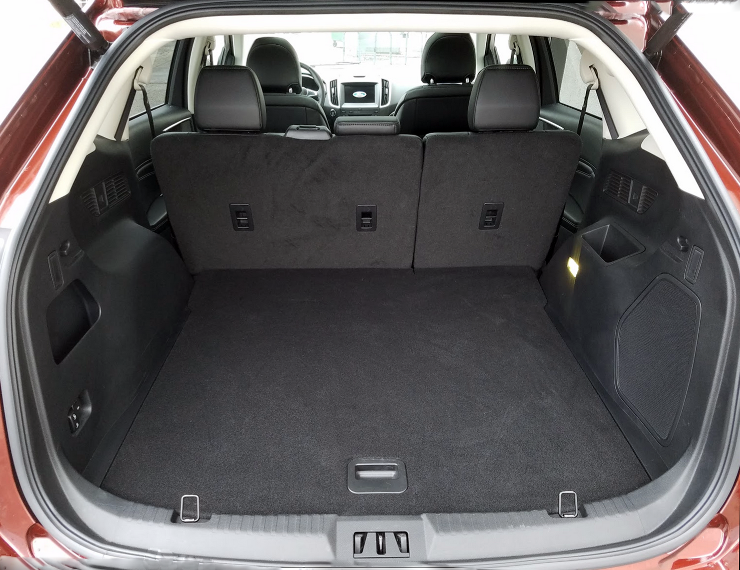 Edge’s hatch opening is a little narrow, but there’s plenty of space behind the 2nd-row seats.

If the difference in the vehicles showed up anywhere, it might have been at the gas pump. The 2015 and ’16 test trucks had the same 245-hp, 2.0-liter turbocharged 4-cylinder engine and 6-speed automatic transmission—though automatic start/stop is new for front-drive models. When yours truly filled up after 202 test miles, 70 percent of which was in city-type driving, the ’16 Edge averaged 21.3 mpg, which bested its EPA city-mileage estimate of 20 mpg. (Highway mileage is projected at 30 mpg.) A year ago, with marginally less city driving, the AWD job gave me 19.0 mpg.

Though there are a couple of bigger and more powerful V6s in the lineup, the 4-cylinder Edge is quite lively. There’s a momentary hint of turbo lag when jumping on the gas, but nothing frustrating. Well-timed transmission kickdowns make for confident expressway driving. Ride and handling rate high marks, and braking is quite good—which a hard panic stop during a morning commute plainly demonstrated. 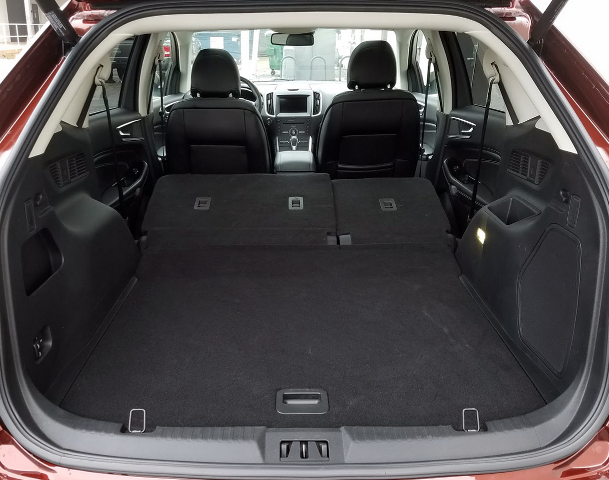 Head- and legroom are plentiful in front, even under the optional sunroof. The second row is fairly spacious, too, and a very low driveline tunnel clears the way for three people—adults, possibly—to occupy the bench. Seats are comfortable and provide good support. The generally quiet Titanium cabin sports soft-touch material on much of the instrument panel and doors, and plenty of eye-catching bright-trim highlights. An ample glove box and deep covered console box with a handy hinged tray provide places to keep passengers’ stuff. There’s a shallow flip-top bin on the dash above the touchscreen, and a small pull-out drawer to the left of the steering column. A covered bin at the front of the console houses digital-device ports. Twin open cup holders are found in the console and in the rear-seat pull-down armrest; bottle holders are included in the storage pockets located in all four doors. Rear passengers also have storage pouches on the backs of the front seats in which to stash items.

A single gauge face for a round speedometer is flanked by small windows on either side of this dial. The windows display vehicle information that can be summoned via thumb buttons on the steering wheel. Though some of the climate-system management is handled on the screen, there are some off-screen repetitive-push buttons for things like fan speed and seat heating/cooling. 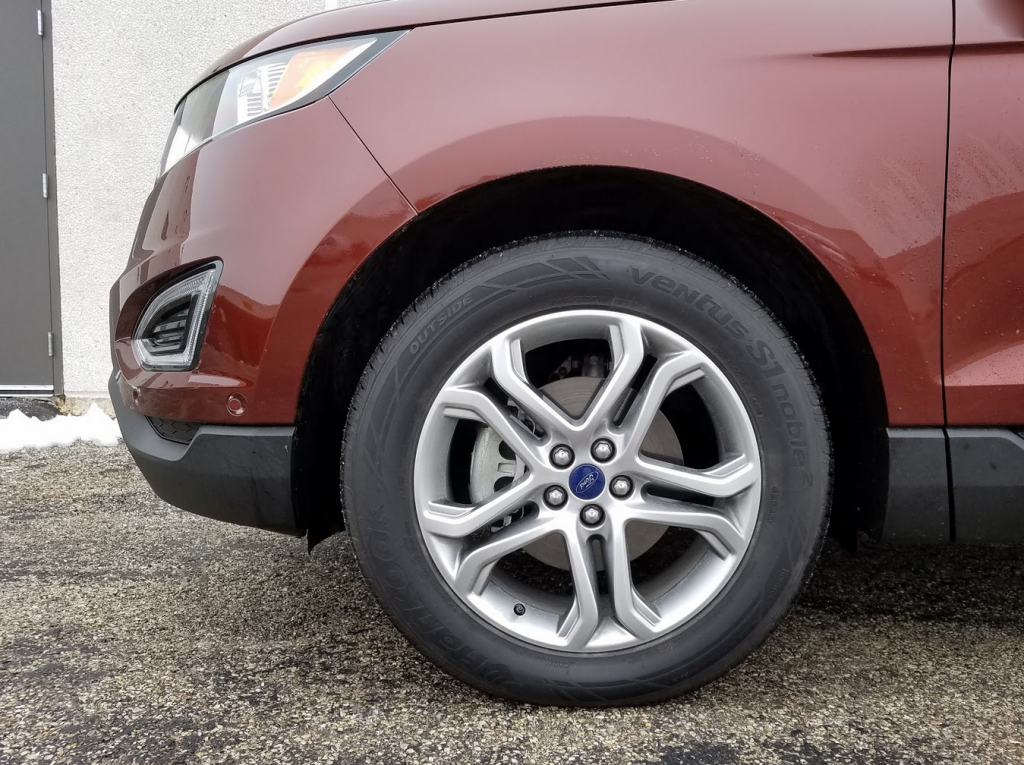 Cargo loads at bumper height through a somewhat narrow hatch opening. Two removable bins under the floor bins provide hidden storage space, and there are small-item spaces cut into the cargo compartment sidewalls. The 60/40-split rear seats fold flat for more hauling capacity—and they do so easily via power-retractor switches built into the left side of the cargo bay.

Yes, the Edge is a pleasing 5-passenger SUV but prices get notably stiffer as it ascends through the trim levels. CG’s tester went from a base price of $35,600 to a full-delivered tab of $44,175. The core luxury of the Titanium comes from things like bright exterior accents at the beltline and on the door handles, illuminated door sill plates, ambient interior lighting, and perforated-leather seats with 10-way power adjustment for both front positions. Other standard equipment highlights are 19-inch alloy wheels, automatic headlight high-beam control, a hands-free liftgate, heated exterior mirrors with integral turn signals, dual-zone climate control, a leather-wrapped steering wheel, 12-speaker audio system, keyless remote entry and starting, reverse sensing, and satellite radio.

If somewhere in all of that you see a sport-utility vehicle that matches your needs and wants, there’s some good news. The 2017 model is going to be just about the same.