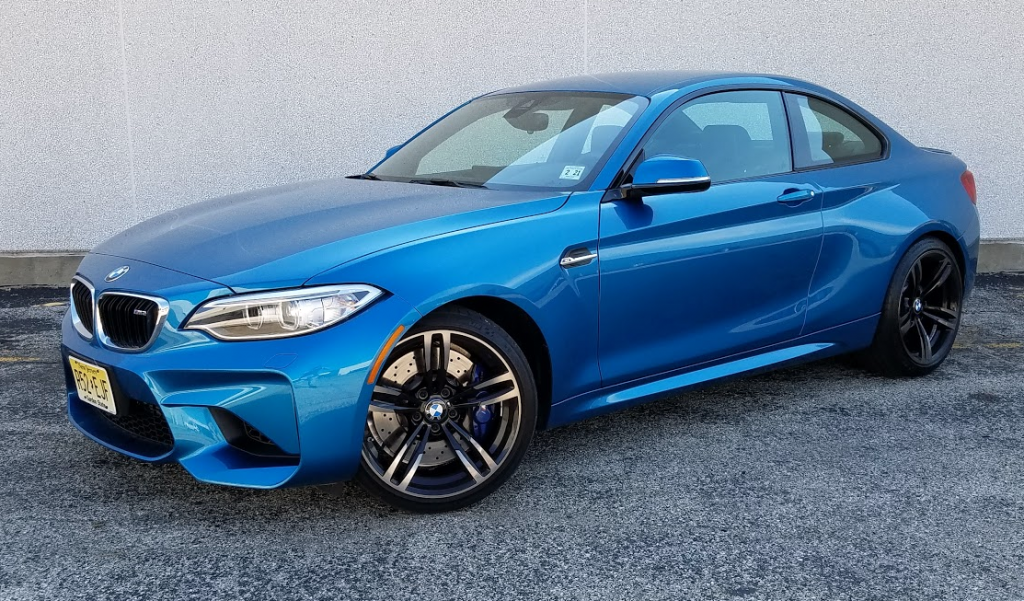 The great: A joy to drive

The good: Refined performance, decent fuel economy given the power on tap

The not so good: Limited cargo- and rear-seat-passenger room, taut ride

It seems that BMW buys into the notion that it takes 2 to tango. The M2 coupe added to the 2-Series line for 2016 steps up to lead drivers in an intimate and alluring dance.

The intimacy comes from decidedly compact dimensions that, while not exactly constricting passengers, will hold them close. The allure derives from a behind-the-wheel experience that aims to inflame the passions of people who like to drive.

The M2’s aggressive front/rear fasciae and flared-out fenders (to house the beefy wheels and tires) give it an aggressive look that’s instantly recognizable to any enthusiast driver.

Consumer Guide® editors drove an M2 with the six-speed gearbox that’s included in the $51,700 base price. (The automated manual adds a considerable $2900 to the sticker but enables quicker 0-60-mph and quarter-mile times.) With extra-cost paint, the comfort-and-safety Executive Package, and destination tacked on, the bottom line of the test car was $54,495. 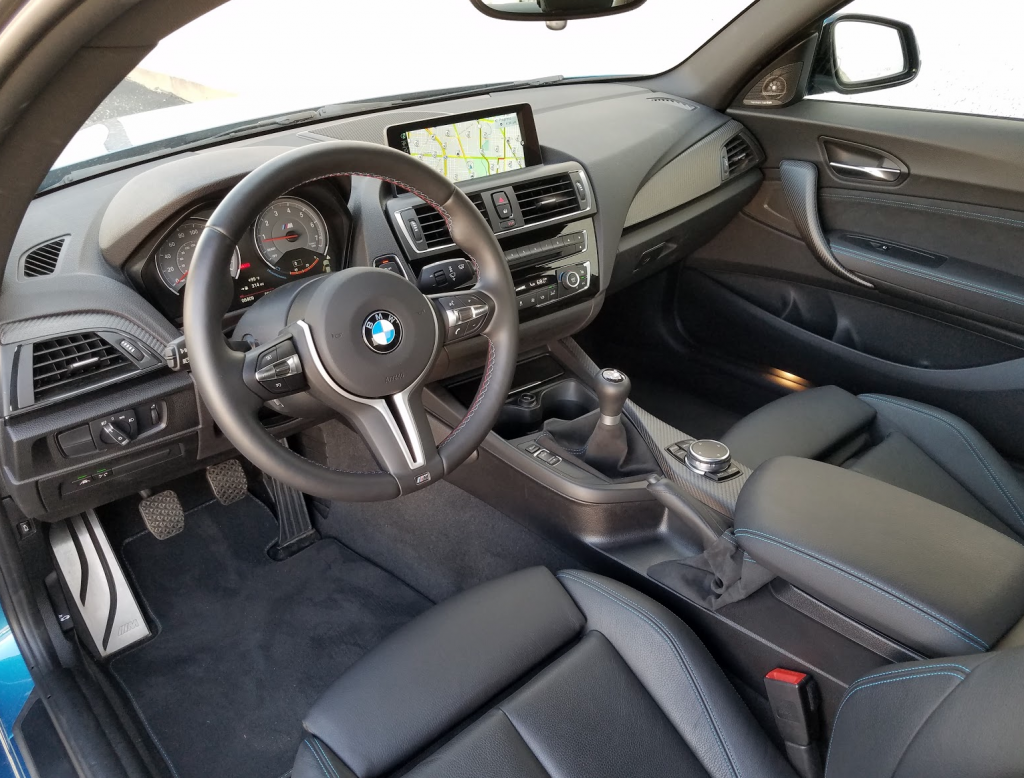 The M2 cabin is more business than posh luxury, but materials and assembly quality are commensurate with the price class.

The inline six is rated at 365 horsepower and 343 lb-ft of torque. With virtually no turbo lag, it gets a move on even before the accelerator gets close to the floor, and it has enough power reserve to still feel lively when prodded while in sixth gear. Upon starting, the engine woos ardently through four chrome-tipped exhaust outlets, and continues whispering the kind of sweet nothings a driver likes to hear. However, the M2 is one of those new-breed cars that uses its audio system to pipe exhaust “mood music” into the parlor, a little white lie that might turn off some who hoped this romance would be the real thing. There’s no doubt about the sincerity of the transmission, however. Shifts are quick and direct with no vagueness between gates, and downshifts automatically prompt a throttle blip for perfect rev matching. The firm—but not heavy—clutch is well balanced and easy to modulate.

EPA fuel-economy projections for the stickshift M2 are 18 mpg in city driving, 26 mpg on the highway, and 21 combined. After putting 168.3 miles on the test car—with 50 percent city-type driving—this reviewer saw 19.7 mpg. However, he admits to having switched off the standard engine stop/start feature, and didn’t always feel bound to follow the gear-selection “suggestion” displayed on the instrument cluster. Curiously, this was the second German-built test car in as many weekends to which he had to add oil (a full quart for the M2). Was ist los with that?

Handling is excellent, with buttoned-down control of body roll in turns and whip-quick rebound from surface bumps. Steering response is almost but not quite as good. Ride is, of course, firm, and the back end will jump a bit over a serious pavement crack, enough to jolt rear-seat passengers—particularly with the “Sport” or “Sport+” dynamic modes selected. Brakes are first-rate.

The body stands out by virtue of distinct front-bumper ducting, an upper-bodyside “gill” with M2 identification, flared rear-wheel openings, and a decklid spoiler. Interior details are black leather upholstery with blue highlight stitching, a three-spoke leather-wrapped steering wheel with stitching in red and blue—the “team colors” of BMW’s M vehicles—and carbon-fiber trim around the cabin.

The heated front sport seats can be adjusted for the right amount of side grip depending on how aggressively you’ll be driving. Front seats track back far enough to give even truly tall drivers acceptable leg room, but the overall sense is of an interior that has only about as much space as necessary for up to four people with little to spare. Two smaller-build adults will fit in back, especially if the up-front folks don’t need all of the legroom. A power-sliding feature on the front seats eases entry and exit somewhat. Headroom that’s passable in front drops off in back—sitting straight up, this 5’-10.5” tester got a scalp massage when he slipped into the back seat.

The top of the dash is broadly dressed in spongy, squeezable material. Door tops are barely padded, however, though soft-touch surfaces are on the arm rests front and rear. Big analog speedometer and tachometer dials are easy to read. The climate system has rotating dials to set temperature in both zones; a row of function buttons handles all other tasks. Control of practically everything else is managed through a dashtop display screen and the iDrive controller on the console. While a little less complicated than some such systems, it still takes a lot of button pushing to get anything done, like setting radio presets. (Watching a colleague enter a destination on the nav system was a consciousness-raising experience.) Without an actual dipstick under the hood, iDrive even handles that duty with an oil-level diagnostic that takes about a minute to run once accessed from the menu.

Grille and front-fender badges (along with a rear decklid badge) announce the M2’s presence to the uninitiated.

Interior storage benefits from segmented door pockets. The glove box is small, the console box (with USB and auxiliary ports inside) even more so. The only two cup holders are in the console. In back, net pouches on the backs of the front seats and a shallow open tray between the rear seats offer limited storage. Trunk capacity isn’t half bad considering the M2’s tidy dimensions, though the opening is a little narrow. A bin on the right side is handy for holding small items from rolling around in the trunk. Rear seats fold in a 60/40 split to add capacity. They rest almost flat, though a gap exists between the seats and the trunk floor. 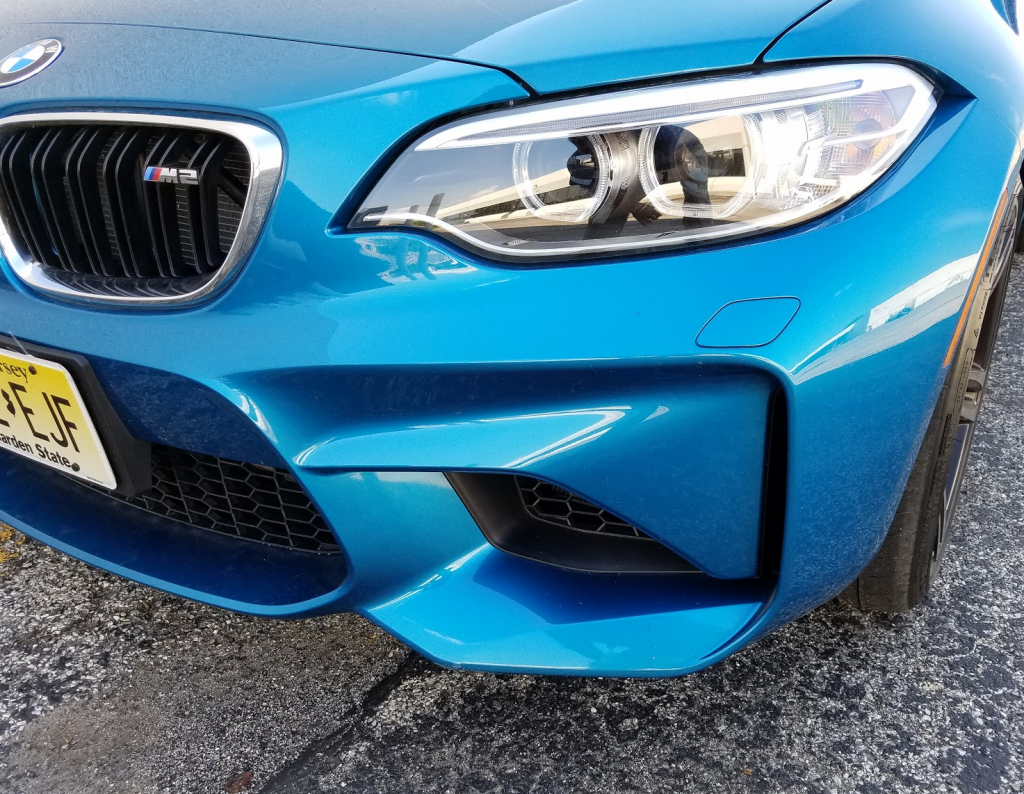 Front and rear fascia treatments are unique to the M2, and sport a more-aggressive look than the trim elements found on the base 2-Series cars.

Just like that, I remember why I used to love BMW. The M2 isn’t powered by a huge, twin-turbocharged V8, it’s not a crossover, and it doesn’t boast any sort of xDrive all-wheel-drive system. Instead, the M2 is simply one of the most-rewarding-to-drive rides I’ve had the pleasure to drive in years.

The straight six is both torquey down low and rewarding to wring out, the suspension is drum tight and delightfully organic feeling when pushed, and the steering is, well, how BMW steering used to feel.

I know that BMW has to make money, and that it can’t stay competitive on a global scale building only small enthusiast-dedicated coupes, but I have often wondered if the German maker has lost its way. Roughly five minutes into my turn in the M2, it was clear to me that the folks from Munich still understand what they are famous for.

That said, I sort of wish BMW would simply build a car with the suspension set the way the engineers want it, and skip this whole adjustability thing.

All 2-Series cars sit on a 106-inch wheelbase–almost 10 inches longer than that of the Porsche 911–yet thanks to incredibly short overhangs, these sporty BMWs look both tidy and purposeful.