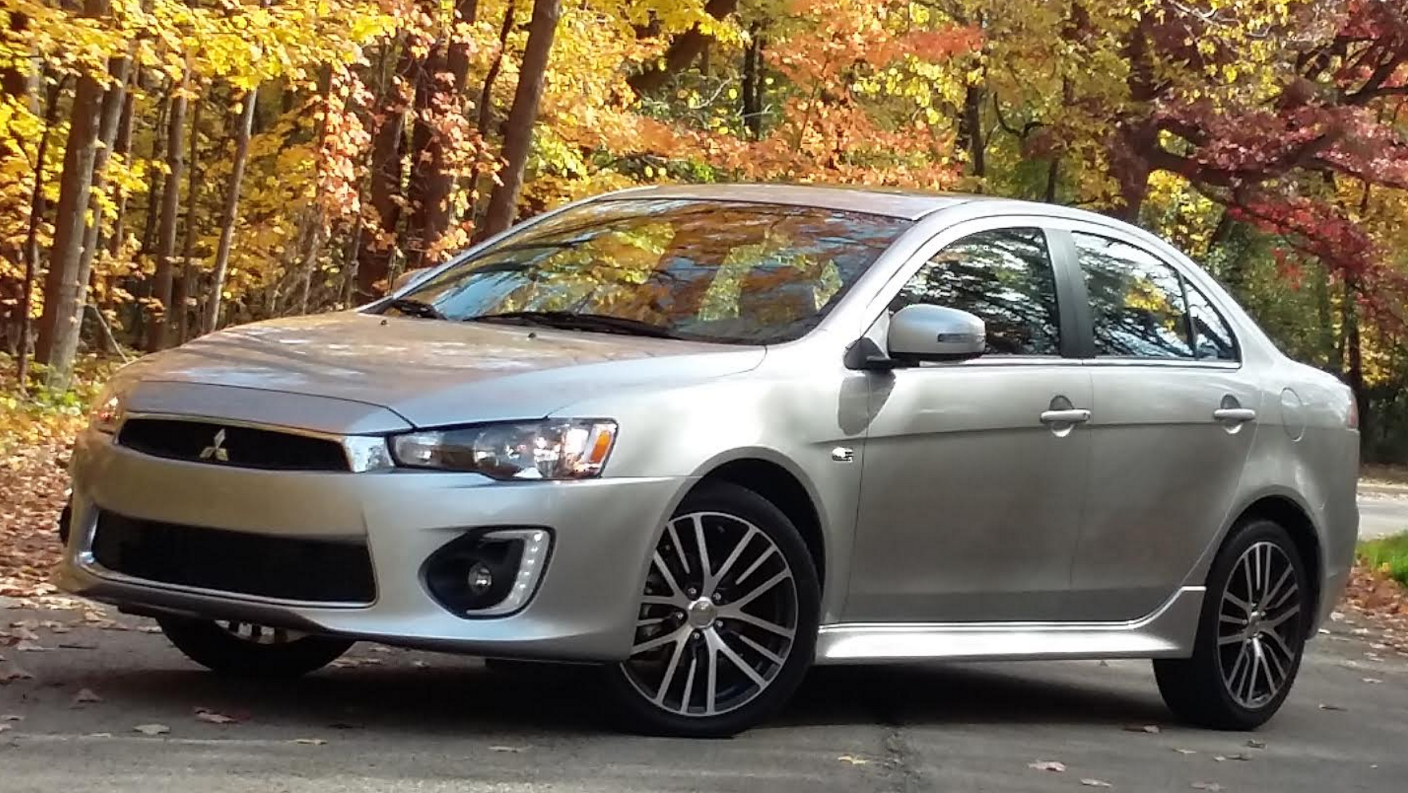 The not so good: Ride over lateral bumps, mediocre all-around refinement

Mitsubishi’s SUVs – the Outlander and Outlander Sport – are doing quite well in the marketplace. Its cars? Not so much. In fact, many people would be hard pressed to even name them. 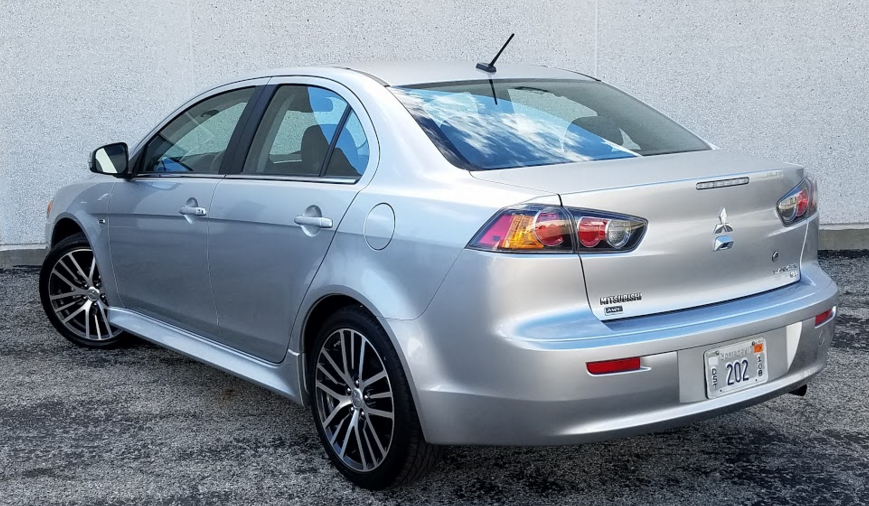 Our test car was fitted with the uplevel (and fairly spunky) 2.4-liter engine, CVT automatic transmission, and all-wheel drive, the latter of which Mitsubishi refers to as “all-wheel control” (AWC).

That’s particularly odd in the case of the company’s compact Lancer, which has been on the market for 15 years. Sure, the “tuner” crowd would know the famed Evolution (“Evo”) version – a ferocious, turbocharged, all-wheel-drive, $37,000 pocket rocket that is now out of production – though even some of them might not know the “Evolution” name is officially preceded by “Lancer.”

But when it comes to compact cars, you have the Chevy Cruze, Ford Focus, Honda Civic, Nissan Sentra, Toyota Corolla … and everything else. Yet none of those top sellers are available with all-wheel drive (except the new performance-oriented $41,000 Focus RS), which is becoming increasingly popular in other segments. In fact, only three compact cars offer it: the Subaru Impreza, the Volkswagen Golf SportWagen and Golf Alltrack, and – you guessed it — the Mitsubishi Lancer.

And that was the subject of our test: A top-line Lancer SEL with AWC (All Wheel Control), which is Mitsubishi-speak for AWD.

It also included the larger 168-horsepower 2.4 liter engine (optional in place of the 148-horse 2.0 standard in lower-line models) and CVT automatic transmission. Particularly notable is that the AWD system includes 2WD, 4WD, and 4WD Lock settings; most other all-wheel drive cars give you no choice – they’re just always in AWD. Also of note is that the Lancer – like most other Mitsubishis – carries the same 5-year/60,000-mile bumper-to-bumper and 10-year/100,000-mile powertrain warranty as Hyundai and Kia famously offer.

As this test was done in mild weather, we used the 2WD setting, which may have aided fuel economy. We averaged 26.5 mpg in 40 percent city driving, pretty good for an AWD vehicle and in line with the EPA fuel-economy estimates of 23 city/30 highway/26 combined.

Furthermore, our Lancer provided rather spunky acceleration. Most 4-cylinder/CVT combos aren’t known for their off-the-line snap, but nail the gas, and the Lancer moves away from a stop quite smartly. The transmission also kicked down quickly when the throttle was stabbed at speed, another admirable trait not shared by all CVTs. The only fly in this ointment is that engine noise grows rather raucous above 2500 rpm even under moderate acceleration. However, at highway speeds, wind, road, and engine noise are reasonably unobtrusive.

The ride could also use some improvement. Most bumps were taken more or less in stride, but lateral ones – like frost heaves (very common here in Chicago) – often prompted a rather harsh jolt. Handling and steering were on par with others in the class; nimble enough, but not quite sporty. 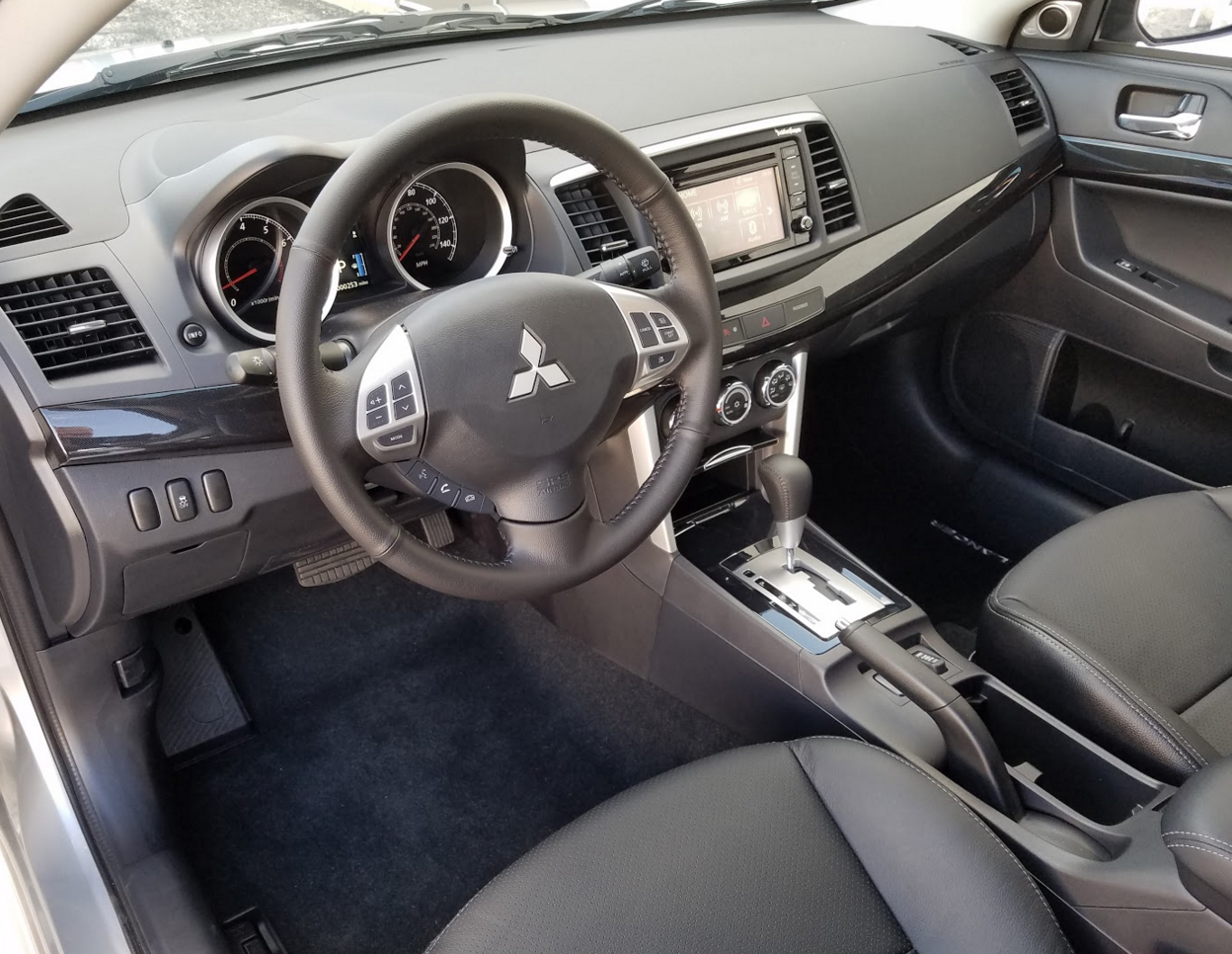 The interior is no slave to fashion and material choices aren’t quite up to current compact-car standards, but it’s quite functional.

The interior was a mix of “good,” and “made to a price.” On the good side, the audio system was fairly easy to understand and use (and included a CD player, an increasingly rare item), as was the simple three-dial climate system that was mounted just a bit too low and recessed for easy access. But the dashboard was just hard plastic in a class that is increasingly going a bit more upscale, and while it was nice that the armrests and door tops were padded (the latter being a bit unusual), it was rather thin in both cases, and the center armrest was positioned so far back that most drivers couldn’t use it as such.

Visibility is very good except to the right-front corner, where the angled roof pillar ends up blocking a good part of the view. When swung to the side, the sunvisor didn’t extend to cover the whole side window, leaving a large portion toward the rear uncovered.

Passenger room and interior storage space are about par for the compact class. There’s decent room in front, and the rear seat should be able to accommodate those up to about 5’11; any taller, and they may run short on headroom. Egress was fairly easy, though the low-set seat cushion in back might make things a little awkward for taller folks.

Storage consisted of a decent-size glovebox, a small covered forward console bin with 12-volt and USB plugs (no Aux jack), two cupholders, a small console box with another 12-volt socket, and map pockets with cupholders in the doors. 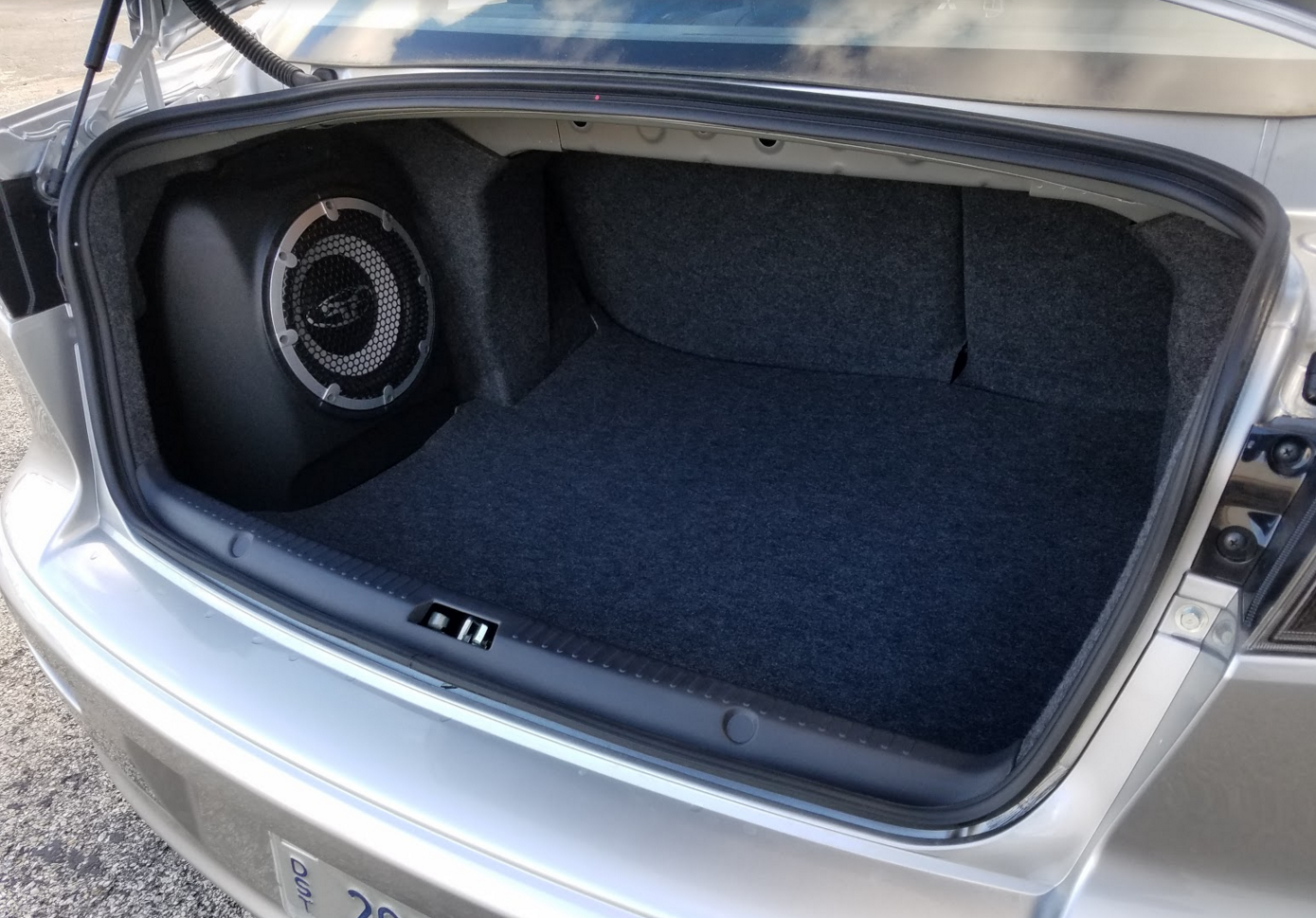 It’s the optional Sun & Sound Package that brings the huge speaker taking up the “cove” (and a lot of space) on the left side of the trunk, but at least the strut-type trunklid hinges don’t dip into the cargo area as most “sickle-shaped” ones do.

Truck space would have been better if it weren’t for the huge left-side speaker that was part of the Sun and Sound Package, as it narrowed the width that might otherwise have been able to accommodate a set of golf clubs laid sideways. Still, there was decent room for cargo, and the strut-type trunklid hinges (a nice touch at this price level) don’t intrude on luggage space. While the rear seat backs could be folded to expand the cargo area, their latches – mounted toward the center of the seat back – were very awkward to reach and unlatch, and the seat back rested five inches above the cargo floor (so long items couldn’t easily be slid forward) with the gap between bridged by rather cheesy-looking carpeting. There was a bit of underfloor space around the spare tire, but it was “unofficial,” as it didn’t have molded contours to prevent stuff from rattling around.

While a front-drive, 2.0-liter Lancer is among the “also rans” of the compact class, the AWD, 2.4-liter model tested has some tangible merits. Its logical competitor is the much better known (and better selling) Subaru Impreza, which has been redesigned for 2017. So if you’re among the growing number of buyers who are making AWD a “must have” feature, it’s really worth checking out the Mitsubishi Lancer – even if you previously didn’t know it existed.

Lancer exhibits a more restrained, mature look than some other cars in the compact class, and like it or not, it results in good visibility. Those 18-inch alloy wheels are standard on the SEL.