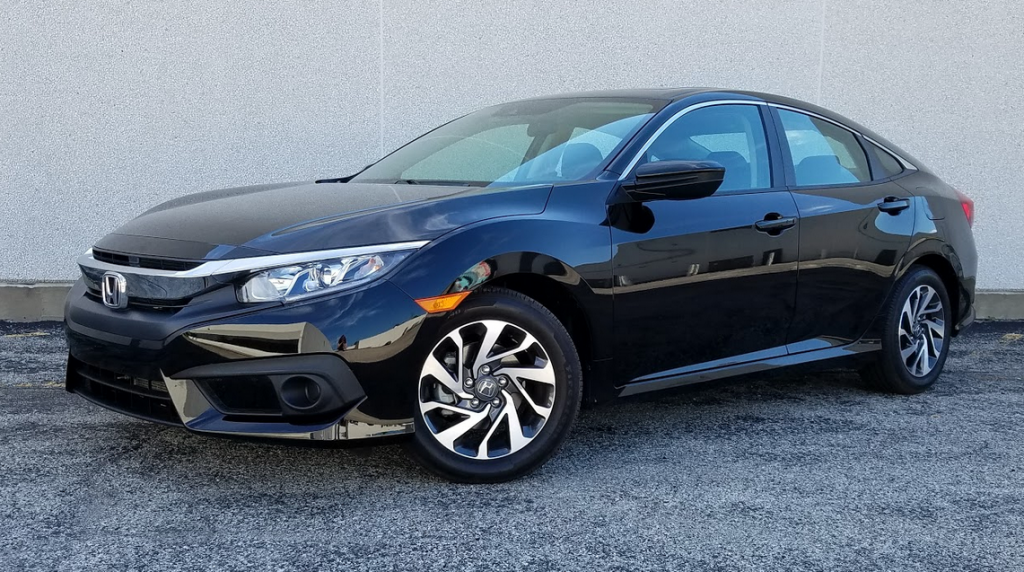 The not so good: Cheap-feeling seat material

When testing a top-of-the-line Honda Civic Touring earlier this year, Consumer Guide® noted that there was a wide price spread in the extensive Civic lineup. As such, there was the opportunity to enjoy the fully redesigned compact’s essential improvements for considerably less than the $26,500 starting price of a Touring.

Here’s the proof: an EX with the “Honda Sensing” safety-technology suite for a base price of $22,040 that CGers got to try out. 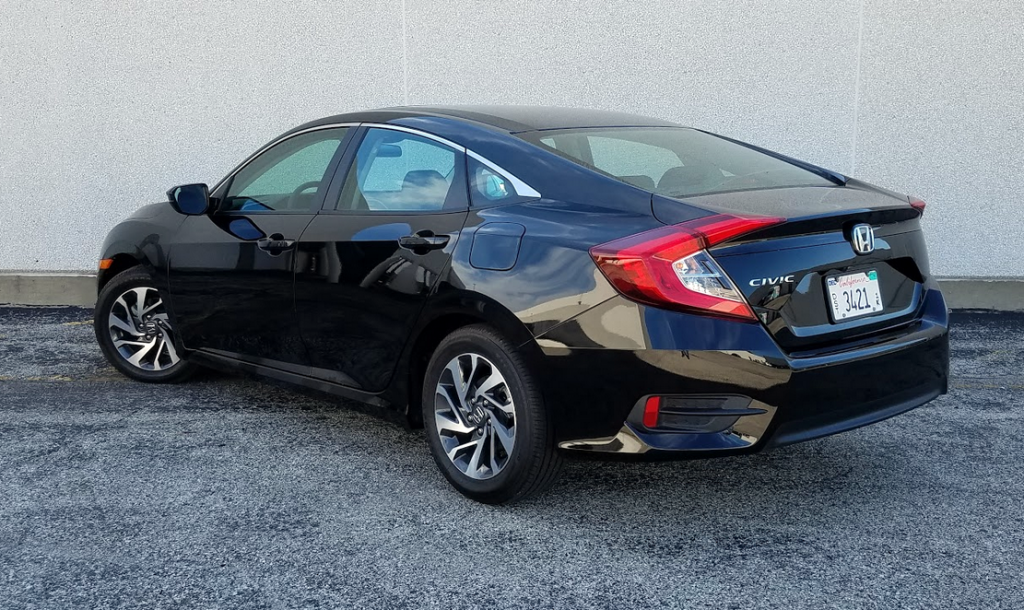 The Honda Civic sedan’s roofline is surprisingly rakish for a mainstream compact car, but its rear-seat headroom is still quite good for the class, as is all-around visibility.

As noted, the EX test car came with Honda Sensing. Standard on the Touring but available on all other models (save for the manual-transmission LX) as a $1000 upgrade, it delivers collision-mitigation braking, road-departure mitigation, forward-collision warning, lane-departure warning, lane-keeping assist, and adaptive cruise control to boost safety. HondaLink makes accessible things like personal music playlists and podcasts via touch, pinch, or swipe control on the display screen—though CG editors have generally found it easier to do things like change radio stations or alter volume by using the steering-wheel thumb buttons instead of manipulating the screen.

Civic’s cabin is roomy for the class, but in EX trim it’s notably less upscale inside than its pricier stablemates. Some testers complained that our test vehicle’s seat upholstery felt cheap.

At 158 horsepower and 138 lb-ft of torque, the 2.0-liter naturally aspirated four-cylinder engine in the EX cedes a lot of rated power to its costlier linemates, all of which have the 1.5 turbo mill. There’s nothing egregiously bad about 2.0-liter’s performance—it keeps up well in highway driving—but neither is there anything overly impressive about it. Lacking the smaller engine’s more efficient direct fuel injection, the 2.0 isn’t quite as stingy with gas, either. EPA estimates for the EX powerteam are 31 mpg in city driving, 41 mpg on the highway, and 35 combined, a near match for the turbocharged engine’s ratings. However, this driver saw 26.9 mpg after a stint of 140 miles, 75 percent of it in city-type operation. When he drove the Touring, it averaged 30.7 mpg with just slightly less city driving. Note that drivers trying to stretch their fuel use can select an “Econ” mode that alters performance. 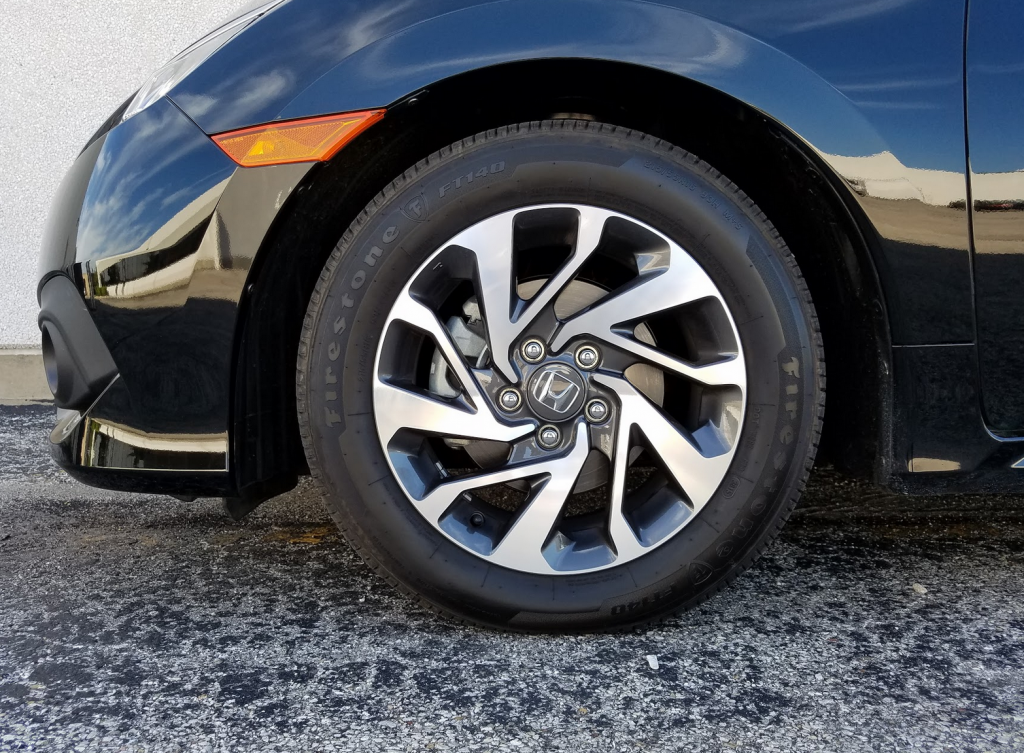 In certain other respects, the natures of the two Civics that CG has sampled are quite a lot alike. Even though somewhat enlarged for 2016, the Civic remains maneuverable, and it rides pretty well, though rougher pavement rattles its composure a bit. Interior room is a strong point, especially in back, where the redesign adds 1.2 inches of legroom. Driver vision to just about any point is very good too.

With cloth seats and a molded—rather than leather-wrapped—steering wheel, the EX certainly isn’t as plush to the touch as the Touring, though seat comfort doesn’t really suffer. Both trim levels have liberal applications of soft-touch material on the dash top and front-door panels, but much less on the rear doors.

Storage, be it in the cabin or in the trunk, is similar. The glove box is fairly large, and the armrest cover of the smallish console box (albeit with an adjustable tray) has fore and aft travel. There are two cup holders in the console and two more in the pull-down center-rear armrest. Pockets in all four doors aren’t particularly big, but the EX had storage pouches affixed to the back of both front seats where the Touring just had one. The floor of the enlarged trunk is consistently flat, but narrows between the wheel houses. Rear 60/40-split seats fold nearly flat, though with a slight gap between them and the trunk floor, and a bulkhead slightly restricts the opening to the interior.

You won’t be as coddled in an EX as you would be in some other Civic models, but you will still be well cared for. So will your wallet.

It’s getting so there’s no such thing as a “base” car anymore. Our near-entry-level Civic EX looks and feels the part of a much more expensive ride. Were it not for the nylon-feeling seat upholstery, this car would pass for a topline-model Civic from just a few years ago.

Of course, at over $22,000, this “low-end” Civic is not cheap. That said, the price is justified by the content, especially when the Honda Sensing suite of safety gear is added to the mix. 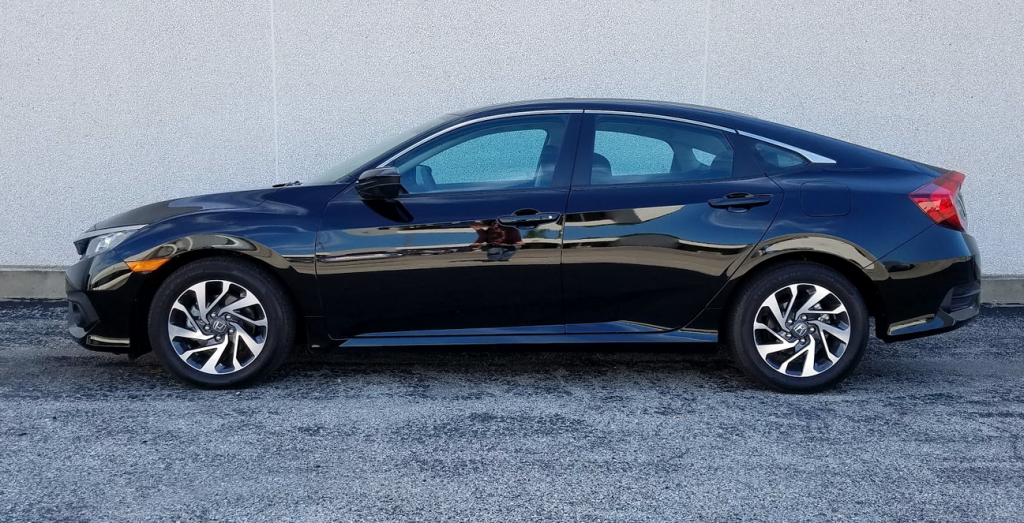 Civic sedans may look long in profile, but in fact are only 2 inches longer overall than the rival Mazda 3 sedan.