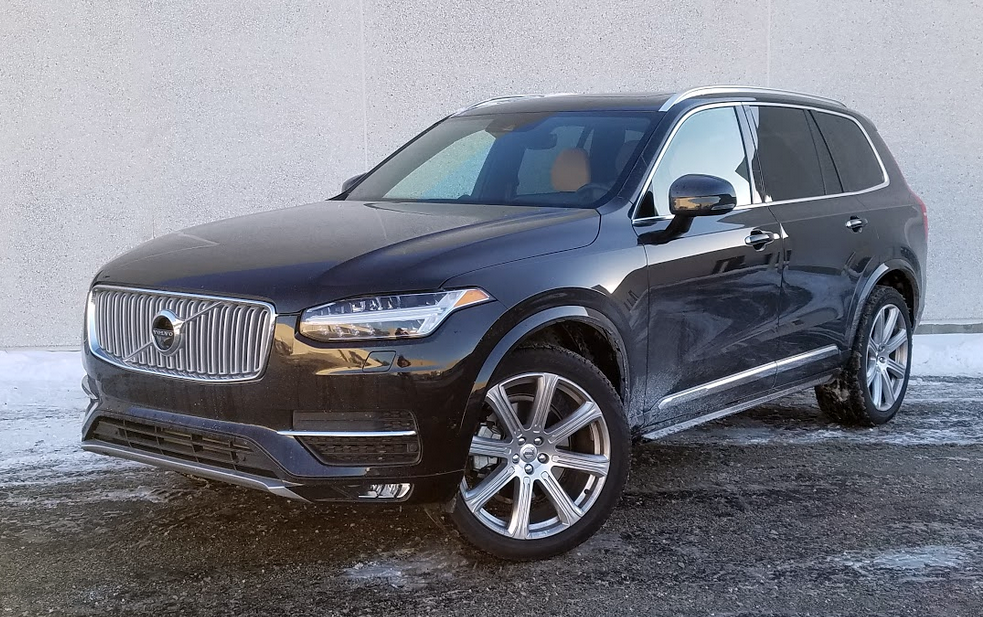 The great: Roomy and luxurious cabin, classy styling inside and out

The good: Decent fuel economy considering the horsepower on tap

The not so good: Pricing gets steep as options are added, third-row best left to smaller children

Volvo’s continuing climb up the luxury ladder is apparent in its XC90 line of premium midsize crossovers. For 2017 there’s a new full-power-and-trimmings Excellence model—starting price $104,900—topping the XC90 Inscriptions that barely had time to settle in as the best on offer. There’s a big price gap between the Excellence and lesser XC90s, but Volvo is finding ways to fill that space. 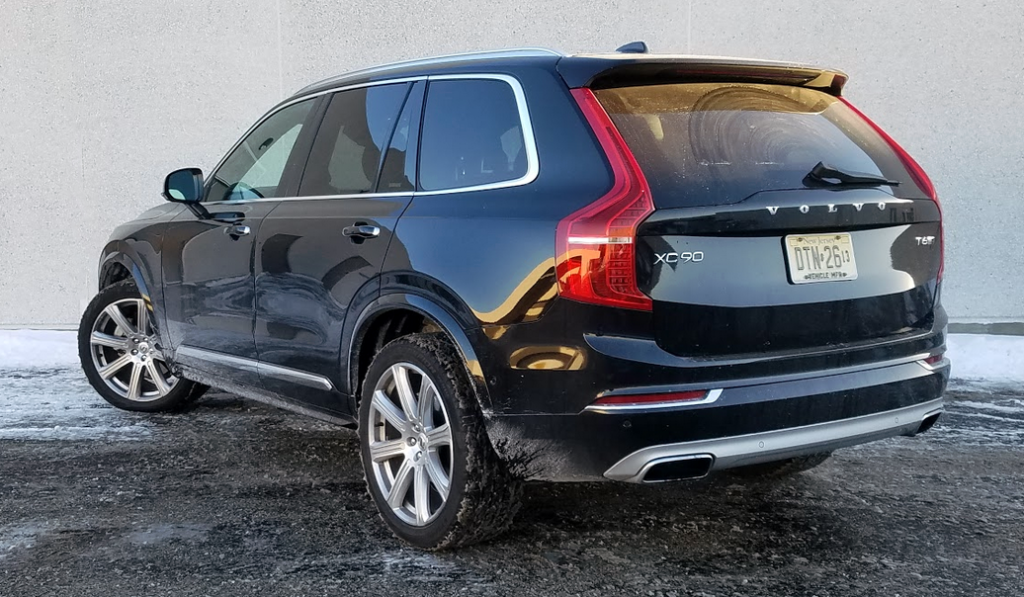 Outside of the ultra-lux Excellence model, Inscription is the top XC90 trim level.

There’s evidence of this just by comparing the 2016 and 2017 XC90 Inscriptions tested by Consumer Guide®. The ’16 tester stickered at $67,805, which included three option packages, an audio-system upgrade, metallic paint, second-row booster seats, 21-inch alloy wheels, 4-corner air suspension, and destination. As CG’s review noted, the only way the vehicle could have cost more was if the Bower & Wilkins sound system had come with a CD player, a $150 item. The ’17 model we sampled cost a lot more: $72,805 delivered. That figure was partly due to a $2700 bump in base price but it also included a new Luxury Package option (massaging front seats, nubuck headliner, leather-covered grab handles and sun visors), head-up display (added to the Climate Package), and the CD player.

The XC90 cabin deftly combines avant-garde design with top-notch materials and workmanship. There’s plenty of space for average-sized adults in the first and second seating rows.

Even before packing on extras, the Inscription has its fair share of luxury and technology. Plush heated and ventilated front seats feature power-adjusted side bolsters and cushion extenders. Soft-touch surfaces and linear-walnut inlays are generously distributed around the quiet cabin. A panoramic moonroof with power shade, “hands-free” power tailgate, 4-zone electronic climate control, tilt/telescoping steering wheel, integrated aluminum roof rails, and illuminated door-sill plates are among other niceties.

Technology features start with the Sensus system. Its vertically oriented 9-inch in-dash screen—Volvo likens it to a digital tablet—displays navigation, audio, and other settings. (For 2017, all models gain Spotify and Park and Pay apps that can be summoned through the screen.) Other standards are Volvo On-Call emergency notification, a 10-speaker audio system, satellite radio, Bluetooth connectivity, pedestrian and cyclist warning/braking system, lane-departure warning, rearview camera, and rear parking assist.

The XC90 boasts decent cargo room behind the third row, which turns generous when those seat backs are folded. The  second-row seats  also fold flush for a truly cavernous cargo hold, but leave a slight gap between them and the load floor.

The extra-cost Climate Package adds heated rear seats, steering wheel, and windshield-washer nozzles. Optional tech items available in various packages include blind-spot and cross-traffic alerts, a 360-degree proximity camera, “Park Assist Pilot” that automatically steers into stall-type spaces, and “Pilot Assist” adaptive cruise control that will mimic the speed and steering of a vehicle in front of the XC90 at speeds below 30 mph.

Swipes and “pinches” allow operators to manipulate the Sensus screen. It’s large, which is good for legibility, but that also makes room for a lot of content to read and decipher, which is less good. Some tasks that should be simple, like programming radio stations, require enough multiple steps to be undeniably time consuming. Note that voice control is available, but this driver’s experience with it wasn’t good. Other controls are generally easy to reach and use. A large, legible vehicle-information display between the two main gauges faces the driver. Selectable driving modes are summoned by rotating a drum selector on the console to the desired setting, which registers on the touchscreen, and then depressing the drum. 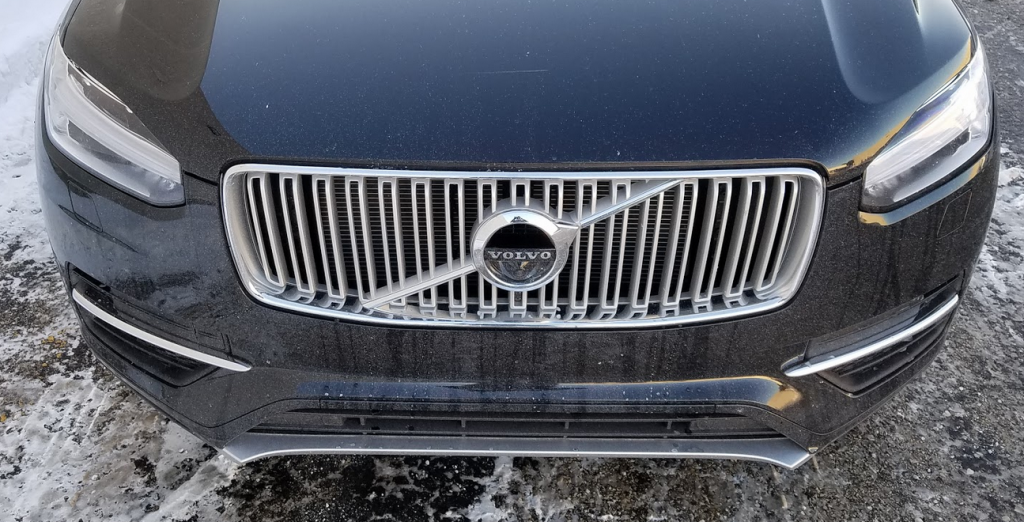 The XC90 introduced the latest iteration of Volvo’s design language, with an understated vertical-bar grille and “Thor’s Hammer” LED headlights.

Except for the new Excellence model, XC90s are 3-row, 7-seat vehicles. Passengers will find ample head- and legroom in front, and very good space in the second row—where three adults can fit if the need arises. Second-row seats adjust fore and aft, and for seat-back angle. The third row may serve a couple of smaller adults for the short term but will probably be better for younger passengers. Doors open wide for easy entry and exit. Ride height of the all-wheel-drive Inscription is a bit elevated compared to some other Volvo people-haulers but this driver was able to accommodate a trio of official-test nonagenarian relatives with little strain to them. Driver vision to most points is quite good with the exception of thick B-pillars that create a significant obstruction to the sides.

Apart from a small, oddly shaped console box, personal-storage space is generally good—even third-row riders each get a cup holder and a small covered bin in the side walls. Limited rear cargo space grows large when the third-row seats are folded to form an uninterrupted flat floor. Second-row 40/20/40 seats fold flat, too, but leave a slight gap between them and the cargo floor. A small underfloor space is available in back, and a number of tie-down hooks are provided for securing cargo. 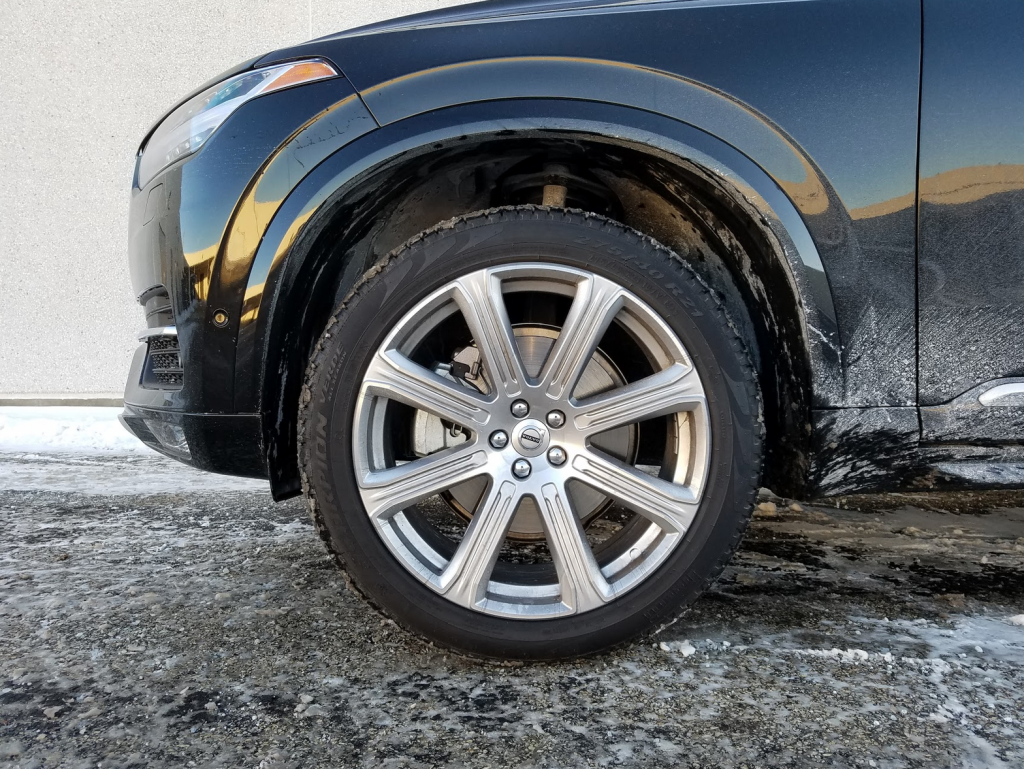 For $750, customers can upgrade to 21-inch “diamond cut” alloy wheels.

All Inscription models come with all-wheel drive. The test vehicle had the T6 powerplant—a supercharged and turbocharged 2.0-liter 4-cylinder engine joined to an 8-speed automatic transmission. The engine develops a healthy 316 horsepower and 295 lb-ft of torque. Four driving modes—“ECO”, “Comfort”, “Off Road”, and “Dynamic”—alter performance of the engine, transmission, suspension, and other systems as needed. Comfort is the default setting, and provides fine performance for practically every driving situation. Dialing into Dynamic unleashes a noticeable eagerness for quicker getaways and effortless highway passing with perhaps the briefest of turbo lag. ECO tempers performance in pursuit of fuel savings but is fine for a lot of in-town driving.

EPA fuel-economy estimates for the XC90 T6 are 20 mpg city, 25 mpg highway, and 22 combined. With some periods of ECO and Dynamic driving—but mostly in Comfort—this reviewer averaged 19.88 mpg after driving 300.4 miles, 57 percent of that in city conditions. When he drove the 2016 Inscription T6, he got 19.58 mpg in a shorter test stint but with the exact same proportion of city and expressway driving.

Even in Comfort mode the ride never gets too spongy, and when it firms up in Dynamic it doesn’t get punishingly stiff. Handling is sufficiently responsive, and braking is prompt if a little abrupt.

Not all XC90s will get to the considerable price level of the 2017 T6 Inscription in this test. However, even the ones that don’t will still have the core qualities that make Volvo’s SUV a “Best Buy” in CG’s eyes.

Since being redesigned for 2016, the XC90 has become Volvo’s most popular model., and for good reason Consumer Guide was impressed enough by the XC90 to name it a Best Buy for both 2016 and 2017.