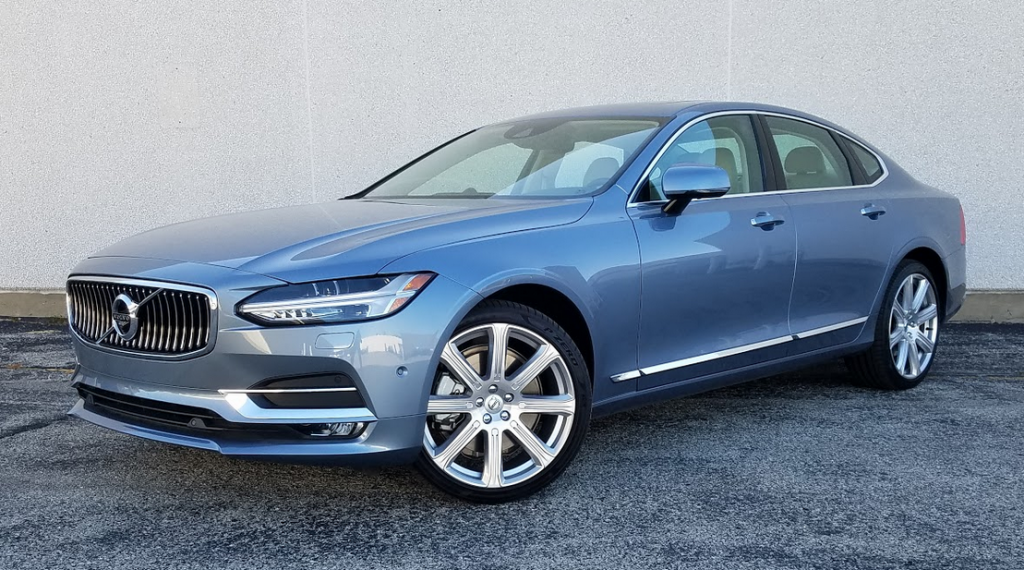 The not so good: Pricey option packages, complicated touchscreen controls

“Efficient” and “safe” were among the words that likely came to most motorists’ minds whenever the topic of Volvos came up. (They were probably the terms of first resort for most automotive reviewers, too.) “Luxurious” though? That was a quality more readily ascribed to certain other European marques.

With the brand new S90—especially in top-level Inscription form—get ready to start thinking of Volvos as efficient, safe, and luxurious. The 2017 S90 Inscription that Consumer Guide® editors sampled was liberally sprinkled with comfort and convenience features in an impressively plush and well-constructed cabin. It manages to do so at prices that are competitive with comparable premium-midsized sedans from the likes of Mercedes-Benz, BMW, Audi, and Jaguar. 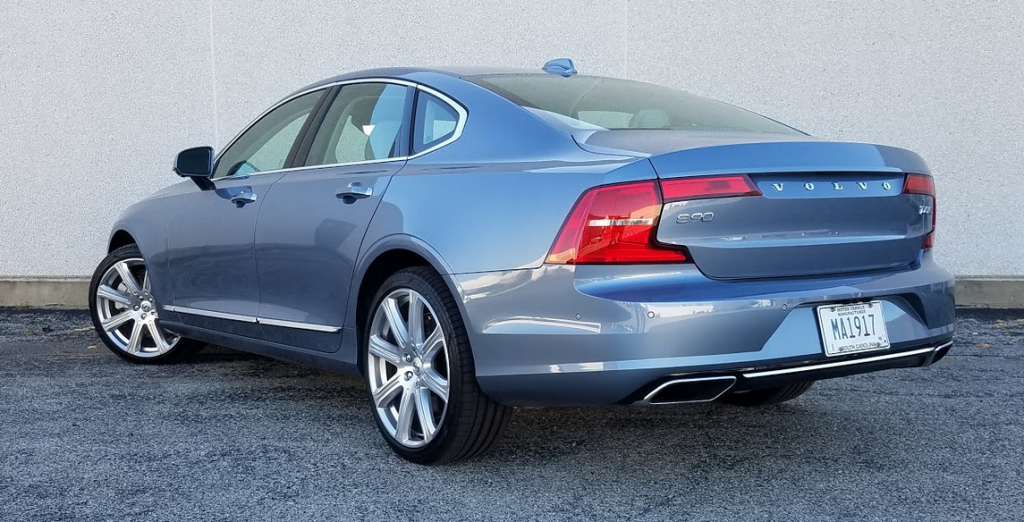 Positioned to compete for sales with the BMW 5-Series and Mercedes-Benz E-Class, the S90 is now Volvo’s flagship passenger-car offering.

The S90 Inscription steps up from the base Momentum model with $3300 worth of extras. To across-the-board features like a power moonroof, Sensus infotainment system with navigation and 4G LTE Wi-Fi hotspot, large-animal detection, “Run-off Road Mitigation,” forward-collision warning and mitigation, lane-departure warning, rearview camera, and rear-obstacle detection the Inscription ups the luxury ante. Headlights have an active bending feature and automatic high beams. Apple CarPlay expands smartphone connectivity. Front seats are ventilated and feature power side support and cushion extenders. Climate control is four-zone, and the glovebox is cooled.

Inscriptions sport instrument-panel and upper-door surfaces covered in leather, with seats in a soft, premium Nappa grade. Soft-touch surfaces are so prevalent that the only interior areas without “give” are either chromed or genuine wood—walnut in the case of the Inscription.

The S90 is roomy for the class, though big guys will wish the front door openings were a little wider.

As the larger of two Volvo sedans in the premium-midsize field—the other being the S60—the S90 also comes with the luxury of added room. This is especially noticeable in the back seat, where adults will fit comfortably—and may even accommodate a third passenger in the middle once arrangements are made for everyone’s feet around the floor tunnel. Headroom is good in either row. While the trunk is somewhat narrow at the back, it does extend far forward, so overall capacity is fairly generous. A slight rise in the trunk floor helps smooth the transition to the fold-down rear seats. There’s also a pass-through door in the rear seat back, albeit with a release on the back of the door. The trunk is so long that you won’t reach it that way, so one of the seat-back sections has to be lowered in order to access the release.

General driving controls are legible and easy to operate. As for the all-encompassing center screen, it can be a mixed blessing. Large and vertical (almost like a printed page), its menus are accessed by finger taps on areas for navigation, audio, telephone, and apps. Once in any of these areas, however, swiping left or right accesses deeper information and/or control. Some of the main screens present a lot of potential choices for a driver to activate depending on his needs, so maybe it’s a good thing the car is automatically looking out for large animals—like Impalas and Jaguars. Climate controls are handled on the screen, too. At least they show up on their own strip at the bottom of the screen so that a driver can access them directly without scrolling through screen menus. Face it: When the windshield suddenly starts fogging, you want the defroster on now, not in three swipes and a tap. 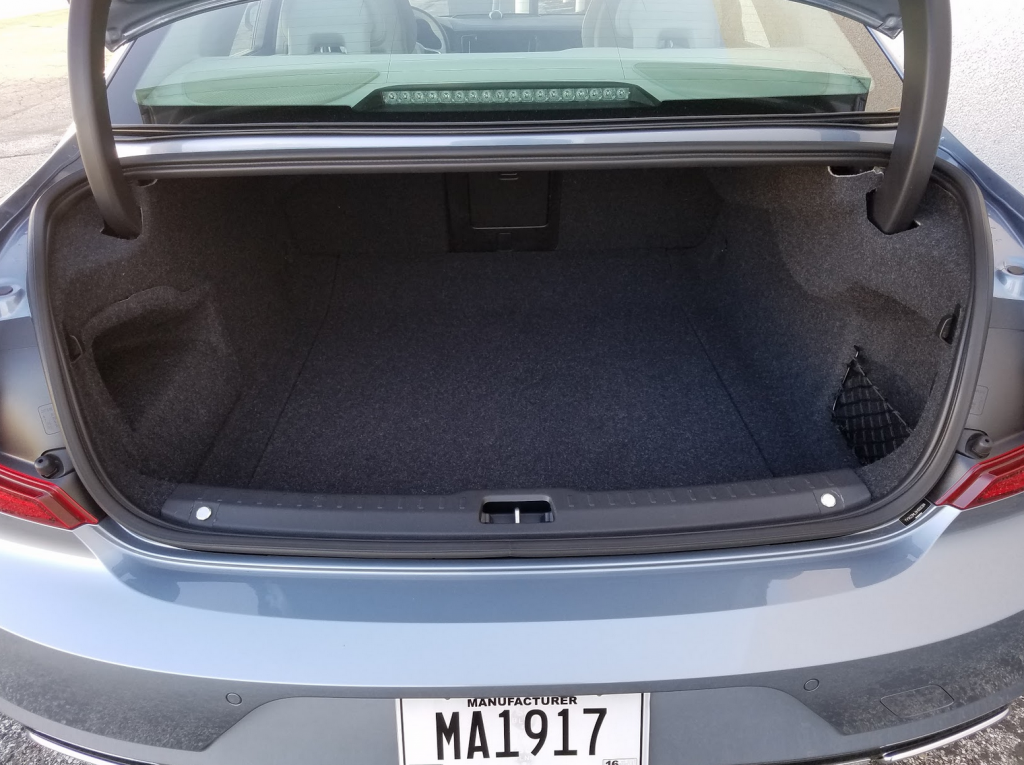 The S90’s trunk is deep and nicely finished, but a bit on the narrow side.

As for the remainder of the interior, personal-item storage is acceptable but not exceptional. The glovebox is twin-tiered, but the console box (with auxiliary and USB inputs within) is fairly small. The console houses a pair of covered cup holders and two small bins. The doors contain map pockets—smaller in back than in front—with bottle receptacles. Net pouches are affixed to the backs of the front seats, and rear passengers also have access to a pull-down center armrest with a shallow covered storage bin and two pop-out cup holders. Visibility suffers a little to the sides due to stout center pillars but is otherwise pretty good. A dash button allows the driver to remotely retract the rear-seat headrests to improve the straight-back view.

Being a T6 version, CG’s test S90 came with the supercharged and turbocharged version of Volvo’s 2.0-liter 4-cylinder engine, good for 316 horsepower and 295 lb-ft of torque. (A turbo-only T5 variant makes 250 horsepower.) It sounds like a belt-and-suspenders solution, but the supercharger provides an immediate power boost before the turbocharger kicks in to take over the job. It’s not a rip snorting powerplant, but it still moves the S90 convincingly and with an alert kickdown from the 8-speed automatic transmission. For a bit more excitement, the driver can select “Dynamic” mode (one of four available performance settings). This alters the transmission shift points and frees up the throttle for a decided improvement in acceleration. 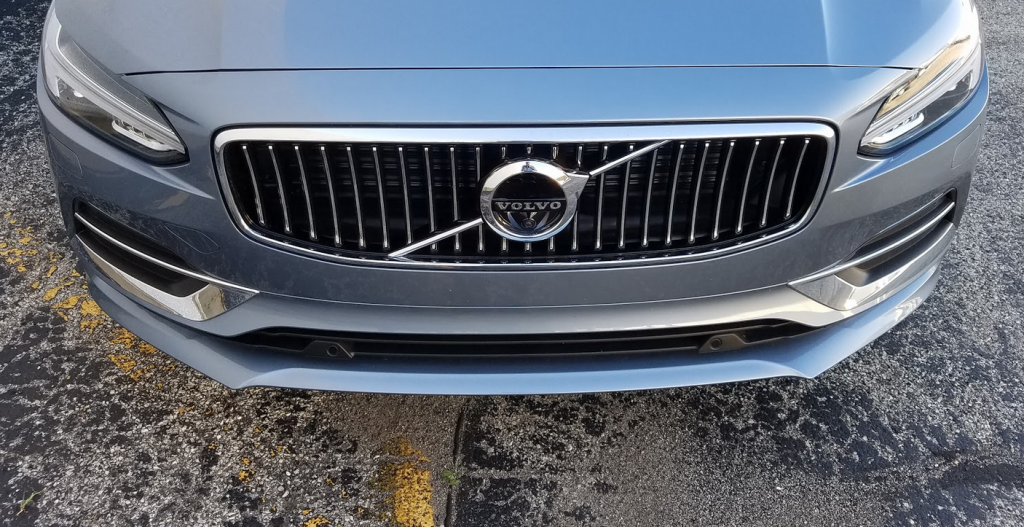 Clean and stately styling is an S90 strong point. An elegant vertical-bar grille and “Thor’s Hammer” LED running lights are among the nicely rendered design details.

The T6 mill, which only comes with an all-wheel-drive drivetrain, is rated by the EPA at 22 mpg in city driving, 31 mpg on the highway, and 25 combined. This driver didn’t see that kind economy in his 180.8-mile test stint, however, recording only 20.77 mpg with 55 percent of miles covered in city-style driving. Note that the S90 does include a fairly smooth stop/start feature to help get those numbers up.

Dynamic mode also has an impact on the chassis, tightening up steering resistance and damping. Again, this makes a perceptible difference from the car’s behavior in default “Comfort” mode—perhaps not all the way to hard or choppy, but not as soft as in comfort, which is quite well isolated from surface impacts. Steering precision is better in Dynamic. The Run-off Road Mitigation (which Volvo says doesn’t require the car to see road markings to know when it’s getting off course) is diligent—and forceful—in helping to keep the car in its lane.

CG’s test car started at $56,450 but settled in at $66,105 with delivery and several options. (This driver’s favorite extra was the fantastic Bowers and Wilkins sound system.) At that point, the S90 is a very functional and safe car, which is no news to veteran Volvo customers. However, it’s also pretty luxurious, too—which is an idea to which shoppers will enjoy getting accustomed.