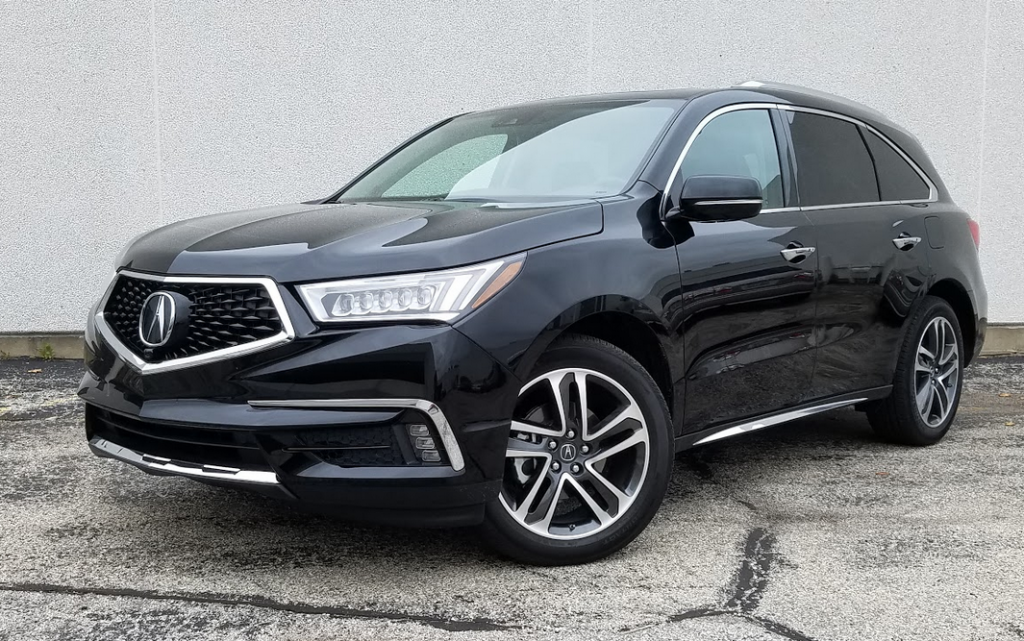 The not so good: Slightly brittle ride with optional 20-inch tires, expensive options drive up the bottom line

Considering that the 2017 Acura MDX that Consumer Guide® editors tested was powered and equipped just like the model-year 2016 MDX they tried out, the driving experience was virtually identical. At least the newer model looked good doing it.

The controversial signature Acura bird-beak grille has been removed from the new MDX, replaced by a concept-car-inspired “diamond pentagon” design. This change comes in concert with a resculpted hood, front fascia, and fenders; new LED fog lights and restyled LED headlights; and a revised rear bumper. 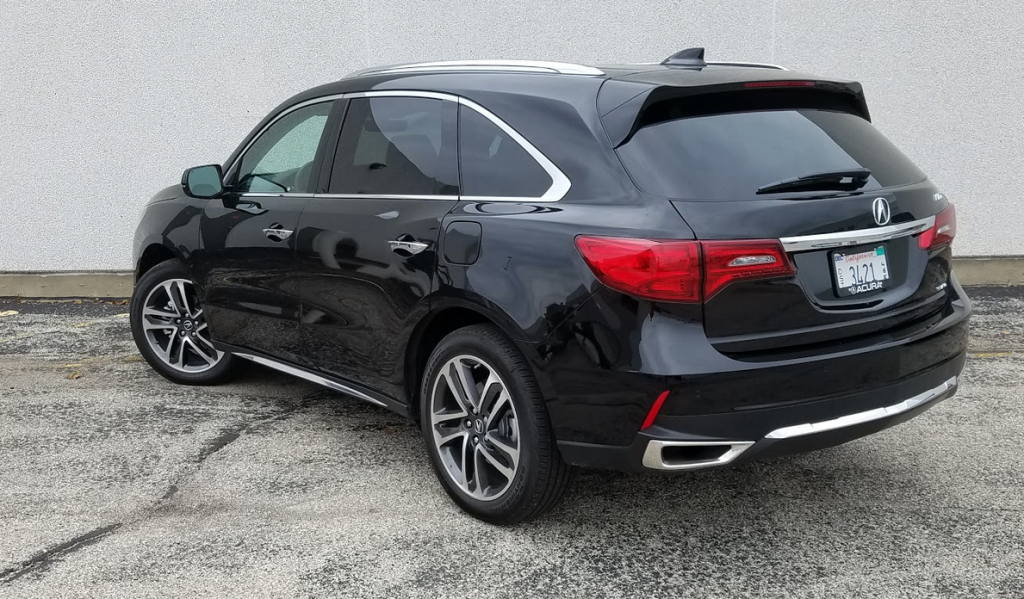 Other changes—a Sport Hybrid model with 3.0-liter V6 and 3-motor electric drive, as well as the extension of “AcuraWatch” driver-assistance and safety features to all models as standard equipment—didn’t have an impact on CG’s test vehicle. It was powered by the same 290-horsepower 3.5-liter V6 with 9-speed automatic transmission as in 2016, and was fully optioned with the same packages that included some of the AcuraWatch features in ’16. With options and delivery, the all-wheel-drive premium midsize SUV came to $59,340—or $1340 more than it cost as a 2016 model.

The carryover powerteam is just as quiet and capable as it has been. EPA fuel-economy figures with the engine stop/start feature (included in the Advance Package option) are unchanged at 19 mpg in the city, 26 on the highway, and 22 combined. The stop/start improves city and combined estimates by one mpg each over models not equipped with this function. High degrees of ride comfort, handling ease, and brake response make the MDX a pleasure to drive. 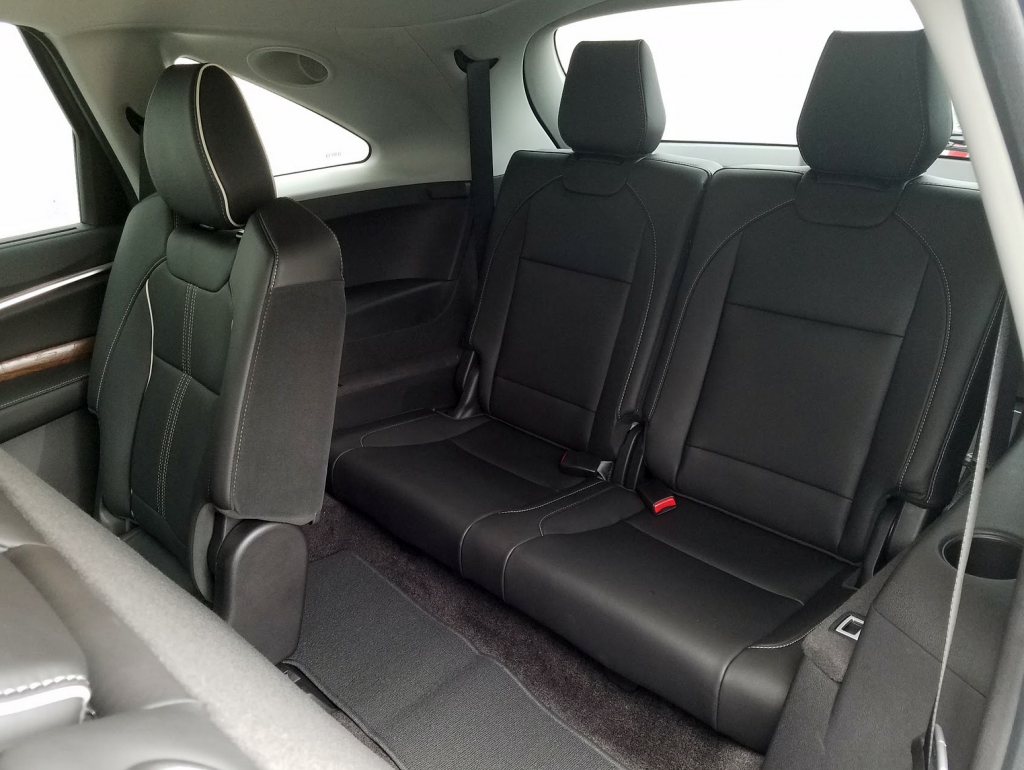 The MDX 3rd-row seat is handy to have, but is best left to the pre-teen set.

Tasteful wood and bright-metal accents adorn the instrument panel, doors, and console. Unpadded hard-plastic surfaces tend to be placed low and out of the way. Main driving instruments show up well but some of the comfort and convenience devices are a little “busy.” For instance, there are two central screens. The top one displays things like the navigation-system map and trip computer, while the lower one projects audio, climate, and phone information. Buttons and toggle switches beneath the lower touchscreen govern the automatic tri-zone heating and cooling system and set temperature, but other tasks are carried out on the screen, some none too easily. At least audio-system operation—such as tuning and saving radio presets—is intuitive and direct. Transmission controls consist of a row of buttons (and a flip-up lever for Reverse) on the center console, a method that can take some getting used to.

There’s a somewhat open and airy feel to the cabin, with large windows and good driver vision except to the far rear corners, where a sloping roof with thick pillars hampers the view. (There are plenty of standard and optional vehicle-sensing and vision assists to temper this problem, however.) Headroom is good in the first two rows of this three-row SUV. Front-row occupants can avail themselves of plentiful legroom, though a “bubble” in the floor costs the right-front passenger some foot space. Second-row legroom is OK for adults, provided taller front-row riders don’t adjust their seats all the way. Models with a 60/40-split second-row bench seat—CG’s test truck had one—can fit adults three-abreast if the middle passenger isn’t too tall. Second-row seat backs are adjustable for angle.

Short on legroom and with a low cushion, the third row is best left to the preteen set. Youngsters should be able to reach these two seats easily enough thanks to a button on either end of the middle-row seats that folds the seat back and frees the seat to slide forward.

Space is limited with the 3rd-row seatbacks in place, however there’s plenty of space once seatbacks are folded down.

Cargo loads at bumper height. With all seats up luggage space is limited, but the rearmost part of the load floor opens to reveal a sizeable underfloor compartment. With second- and third-row seats retracted, a very large, flat cargo floor is created. Storage for personal items is ample, with large map pockets/bottle holders in the doors, a generous glove box, a deep “split-level” console box, and a covered compartment in the console with a USB port and power points. Open cup holders are found in the console, in the pull-down center armrest in the middle row, and in the sidewalls on either side of the third-row seats.

The Honda/Acura custom of treating option packages as if they were trim levels means CG’s test vehicle with the Advance and Entertainment packages was about as deluxe as a 2017 MDX could get. The Advance Package (which requires ordering the Technology Package with navigation and voice-recognition premium audio) adds things like the engine stop/start, heated and ventilated perforated-leather seats, a heated steering wheel, surround-view camera, and more. The centerpiece of the Entertainment group (when paired with Advance) is a 16.2-inch video display—with split-screen capability—that retracts into the roof and comes with a pair of wireless headphones.

Acura MDX remains one of the sportier premium crossovers available, and is a favorite of the Consumer Guide staff.