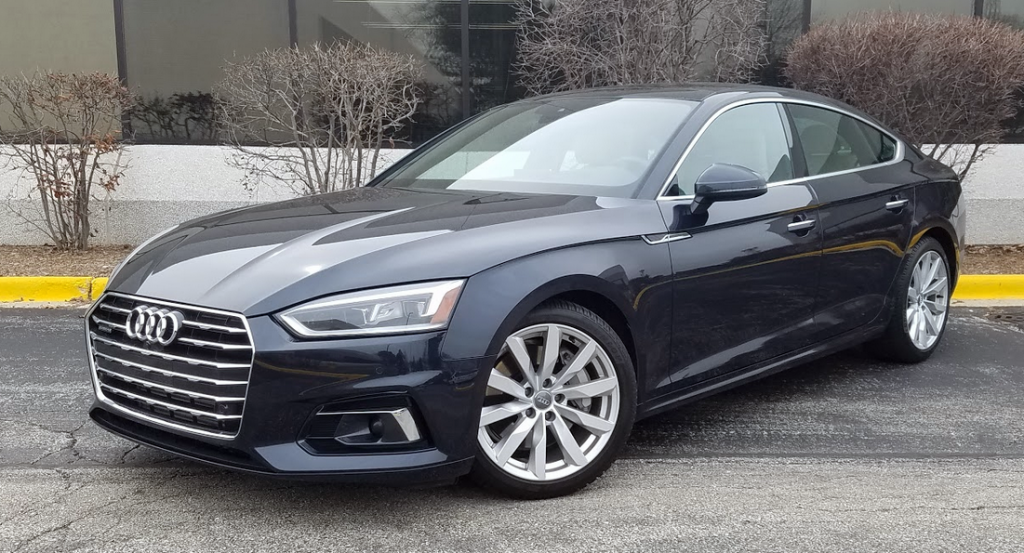 The not so good: Rear-seat room is a bit stingy; some complicated multimedia controls

There’s good news for anyone who’d like to own an Audi A5 coupe if only it weren’t for that two-door thing: Audi now makes the A5 as a four-door thing.

The premium-compact Sportback 4-door hatchback is an all-new body style for the A5 product line. It shares its basic architecture with the A5 coupe, which itself is completely redone for 2018. As with the A5 coupe and convertible, the Sportback is available in A5 and high-performance S5 trim.

The new-for-2018 Audi A5 Sportback looks like a swoopy, fastback-styled four-door sedan at first glance, but it has a hatchback rear liftgate instead of a traditional trunk–a feature that makes it a bit more practical for carrying cargo.

In profile, the Sportback has the long-roofline sedan shape—dare we call it “fastback?”—that has crept into lots of automakers’ thinking of late. (Indeed, the Audi A7 has the same look.) The front half of the Sportback is in line with the A5, but from there it becomes a slightly bigger car with a 111.2-inch wheelbase and 186.3-inch total length. The same dimensions on the coupe are 108.8 and 184 inches, respectively. Still, rear leg- and headroom remain limited. At least the Sportback’s 4-door configuration permits easier rear-seat entries and exits, and the hatchback design affords easy loading with a low liftover into a cargo bay of fairly generous proportions.

The A5 Sportback cabin has a luxurious, high-quality ambiance, particularly when equipped with the $7600 Prestige Package. Rear-seat legroom quickly grows cramped behind a tall front-seat occupant, and headroom is a bit tight as well.

A5 Sportbacks come in a choice of three trim configurations. Consumer Guide® sampled one with top-level Prestige gear, which arrives via a $7600 package applied to the $42,600 base vehicle. With additional options and delivery, the test car clocked in at $55,400. 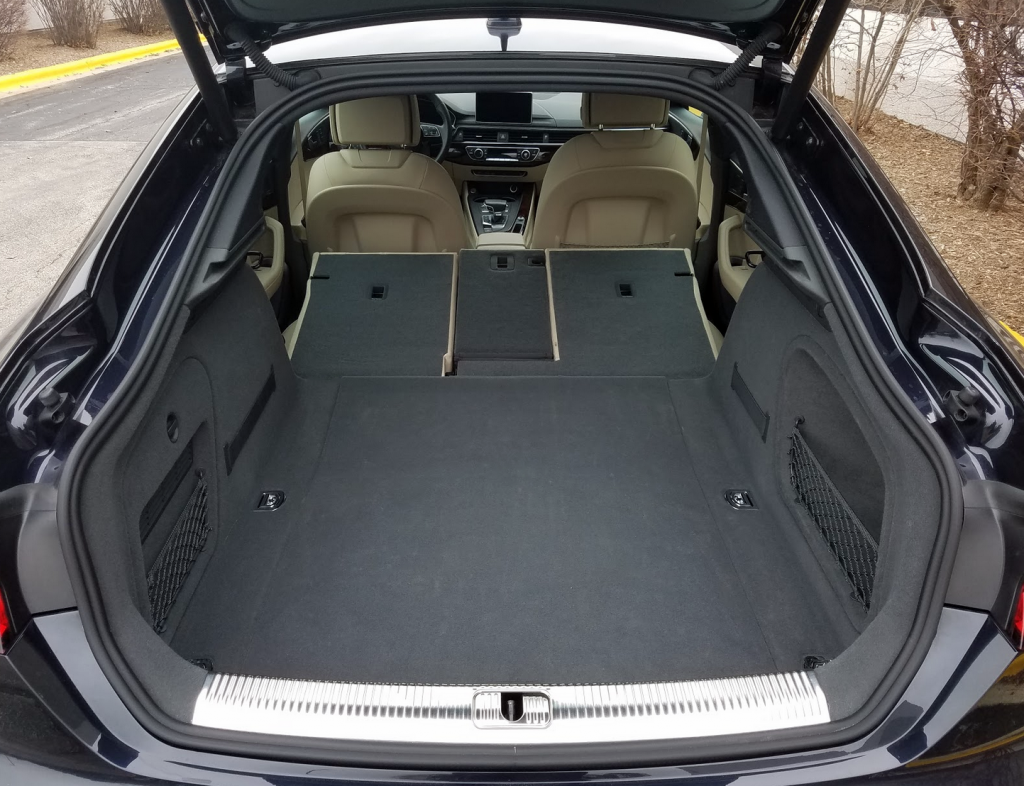 The Sportback offers 35 cubic feet of cargo space with the rear seats folded.

Other standard gear in place before Prestige is added in starts with a 2.0-liter turbocharged 4-cylinder engine, 7-speed dual-clutch automated manual transmission, and quattro all-wheel drive. The Sportback rolls on 18-inch alloy wheels, parks passengers on leather seats, and heats and cools them with three-zone automatic climate control. Power amenities include a tilt-and-slide sunroof and the hatch liftgate. The smartphone interface includes Apple CarPlay and Android Auto compatibility. A stop/start feature is included to help save some fuel, though it can be switched off.

The 2018 A5 turbo four produces 252 horsepower (19.4 percent more than previously) and 273 lb-ft of torque. With good cooperation from the automated-manual gearbox, the Sportback was always energetic, with rapid and linear acceleration after the turbo quickly spooled up. Standard “Drive Select” gives drivers the ability to select a performance mode for several different behavior patterns, from gas nursing to an enhanced degree of performance. The EPA fuel-economy projections for the A5 Sportback are 24 mpg in the city, 34 on the highway, and 27 combined. When this driver put 202 miles on the test car, with 50 percent city-style operation, he averaged 26.1 mpg.

The test car displayed a genuine luxury-car ride on its fully independent multilink suspension, and handled with confident ease while in “Comfort” mode. Big 13.3-inch-diameter front discs and 13-inch rear discs haul the A5 down in a smooth hurry—particularly in a rush-hour panic stop at highway speeds when this tester was sure he was about to have company in his lane. 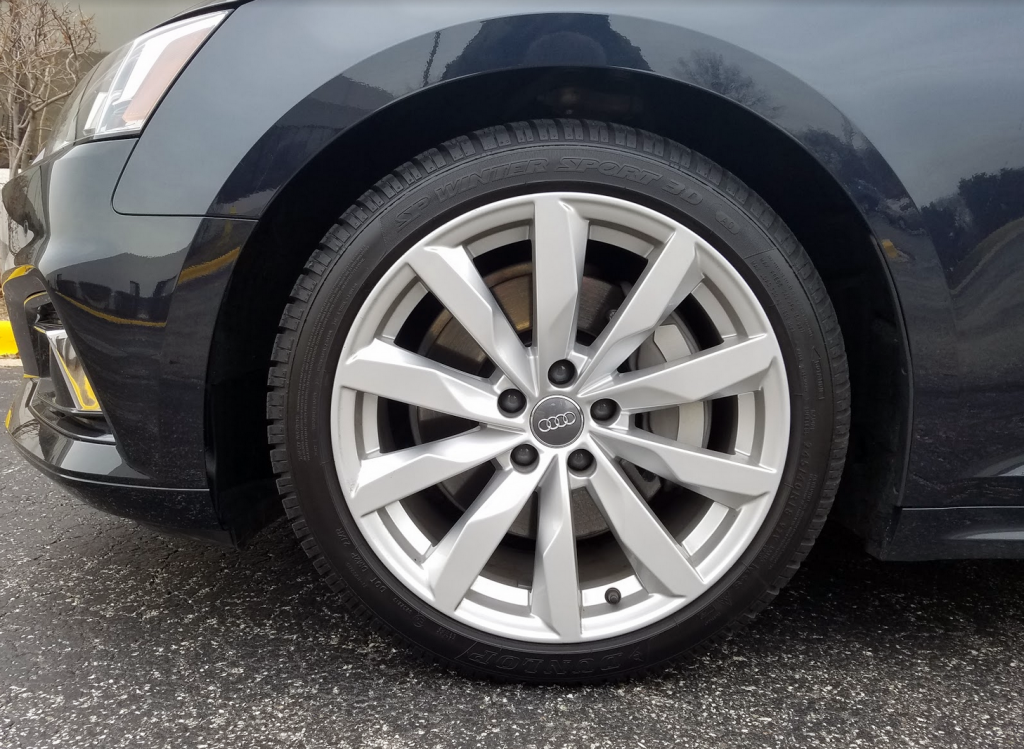 Indeed, apart from its door and cargo configurations, the Sportback pretty much delivers the same look and feel of the A5 coupe. There’s the same new instrument panel design. There’s still Audi’s MMI console-commanded management of audio, navigation, and smartphone apps as they appear on the dashtop display screen—and it’s still a hard thing to master, especially while committing the act of driving. Less attention sapping are the climate controls in the center of the dash. They have separate dials to select temperature, as well as dials and toggle switches function settings, and rear-seat passengers get climate controls of their own. Soft-surface material is well distributed around the cabin, which was made a little lusher in the test car with optional walnut inlays for the instrument panel, console, and doors.

Seats are comfortable with good support, but effective adult capacity is four, and as noted they may have limited legroom—particularly if front passengers have to maximize their stretch-out space. Interior storage in the front row consists of door pockets, a glove box that houses slots for an SD card and other digital inputs, a tray under the sliding center armrest, and two open cup holders. The second row provides a pull-down center armrest with a shallow covered space and two fold-out cup holders, sidewall pockets, and net pouches on the backs of the front seats. The center section of the rear 40/20/40 seat serves as a pass-through when folded. Seats don’t fold totally flat but a fabric panel facilitates the transition from the cargo floor. With the rear seats down, the Sportback puts 35 cubic feet of cargo space at the driver’s disposal.

A number of manufacturers are tinkering with hatchback sedans that have a touch of wagon about them. With the Sportback, Audi has conjured a hatchback sedan from a coupe. With a dashing look, nice driving manners, and extra cargo space, it might be your thing.

The Audi A5 Sportback delivers all of the sophistication and satisfying performance of its traditional-sedan A4 sibling, with the added benefits of hatchback cargo-carrying versatility and sleek, fastback-esque styling.