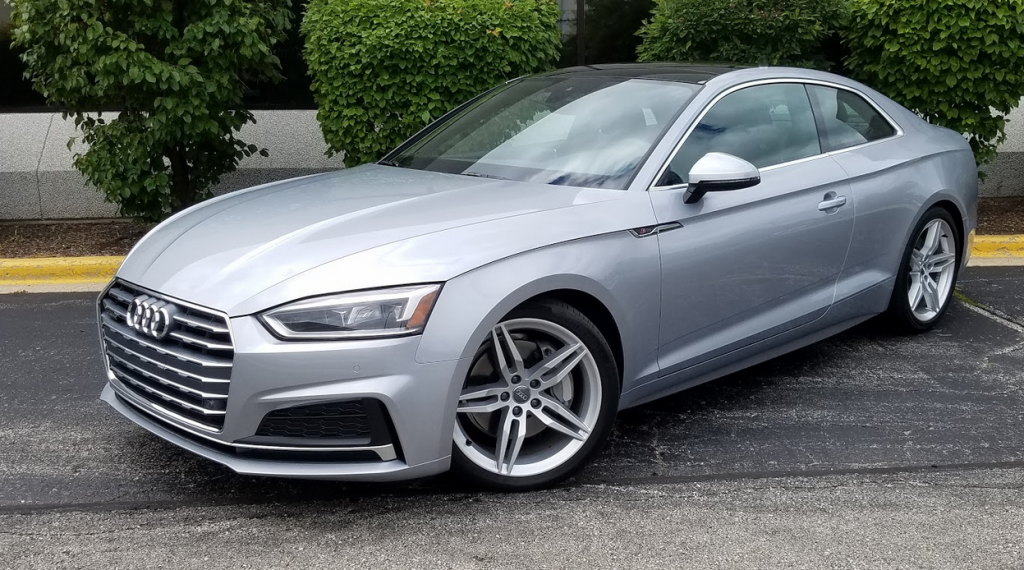 The not so good: Pricey options quickly drive up bottom line

Audi checked off quite a wish list to redesign its aging A5 coupe for 2018. There is new styling inside and out to go with a lightened unit-body platform, more power from the turbocharged 4-cylinder engine, and added tech features.

All of that was at the disposal of Consumer Guide® editors when they got the chance to try a heavily optioned Florett Silver A5 with a 7-speed dual-clutch automated manual transmission. 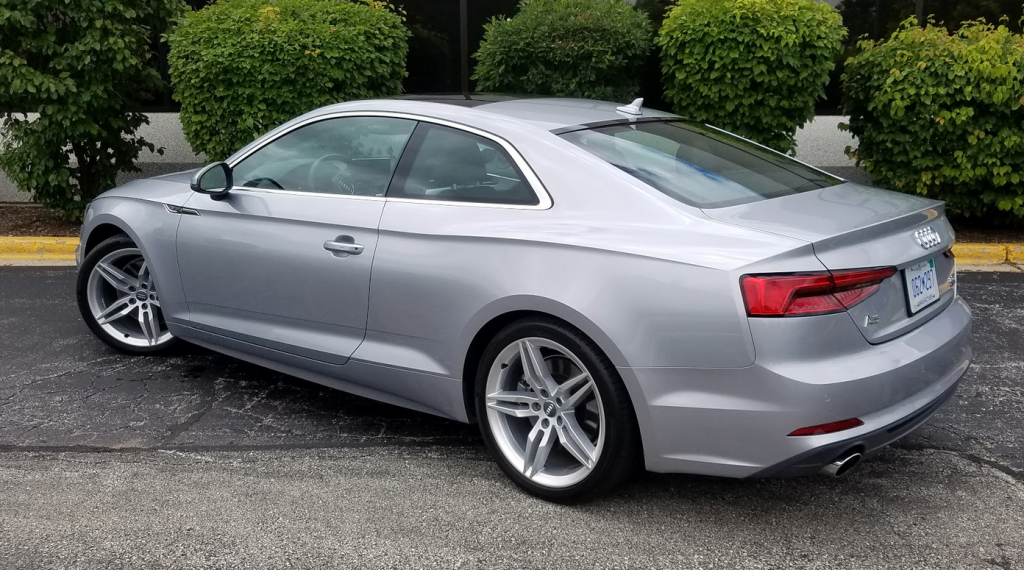 The new-for-2018 A5 coupe is a stylistic home run, and the extra-cost Florett Silver Metallic paint is downright dazzling in person. The handsome 19-inch “S Line” wheels and summer performance tires on our tester are an $800 option.

The A5’s new exterior styling is evolutionary. Folks who may have admired the first-generation car will see a familiar profile, especially in the roofline and in an upper-body character line that flows over the front wheel opening before running back to the rear of the car. (The new bodysides are a little more sculpted.) However, the headlights, grille opening, fascia, and taillights are considerably reshaped.

The A5’s cabin is impeccably finished, but some of our editors thought it didn’t achieve the “wow factor” of other recent Audi test vehicles. As is typical in most coupes, the A5’s rear seat can be cramped for adults and is a bit tricky to access.

There’s still a 2.0-liter turbo four in the engine bay, but where the previous powerplant made 211 horsepower, the 2018 job generates 252 ponies and 273 lb-ft of torque. The automated-manual gearbox is a no-cost alternative to a fully manual 6-speed transmission. Audi says the 2.0 with 7-speed will go from 0 to 60 mph in 5.6 seconds—a shade faster than it will do with the stickshift. Some dual-clutch transmissions stand accused of rough shifting. This driver sensed little of that while at the wheel of the A5 in an almost-equal mix of city and expressway driving—though at least once the car interrupted a getaway from a traffic signal with a pronounced pause a moment after it started rolling. Standard “Drive Select” gives drivers the opportunity to pick a performance mode. The “Dynamic” setting turns up the heat at the gas pedal a little bit. 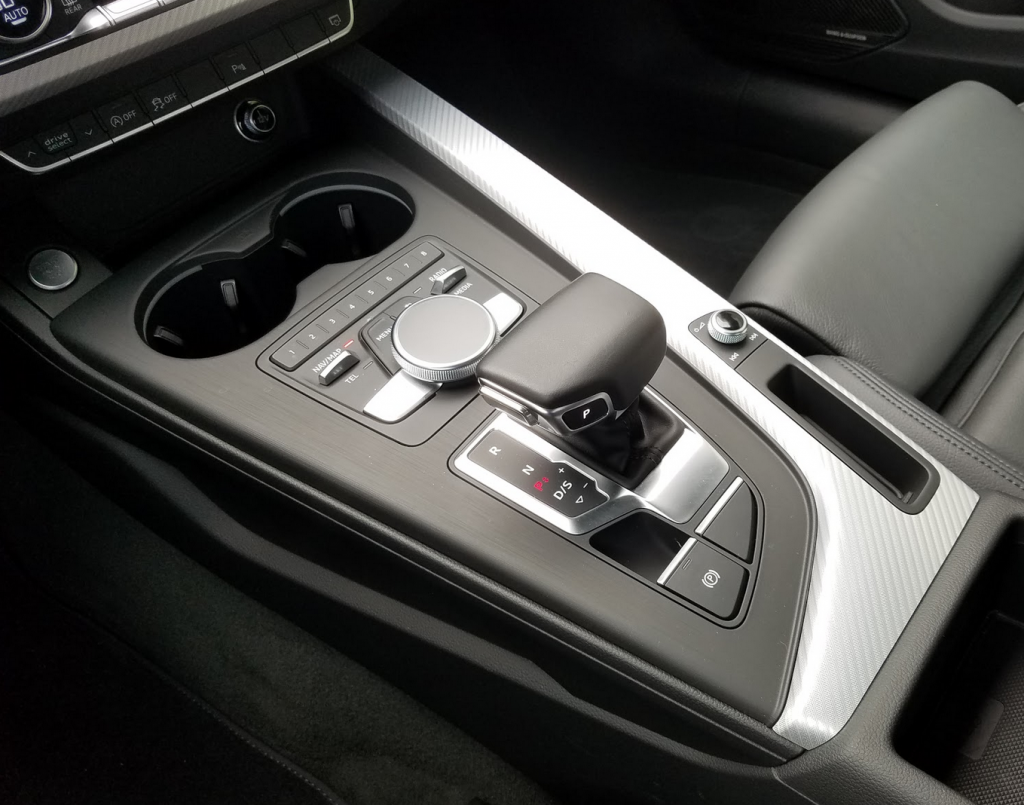 The A5’s console is nicely finished, but some control quirks–such as the separate park button on the shift lever and the MMI control dial–require acclimation.

EPA estimates for this powerteam are 24 mpg in the city, 34 on the highway, and 27 combined. However, this driver’s 168.4-mile test stint with 50-percent city-type driving returned 23.3 mpg, a figure that has to be considered somewhat disappointing. A standard stop/start feature—that can be switched off—is included to help save some fuel.

Even with standard quattro all-wheel drive and sport suspension tuning from the S-line option package that was added to the test car, the A5 is more of a nicely composed tourer than it is a pavement predator. The fully independent suspension steps over road blemishes smartly but not without some give, minimizing jolts felt in the cabin. (The test car also came with extra-cost 19-inch alloy wheels shod with “summer” performance tires.) Steering is fairly precise, with something of a bias towards ease over feedback. Brakes do their work quickly and well.

The focal point of the redecorated interior is a new instrument panel that incorporates controls and monitors for the many comfort, convenience, and safety features included in the A5. This works in concert with Audi’s MMI console-mounted control dial to manage audio, navigation, and smartphone apps as they appear on the dashtop display screen. Typical of such devices that are now common in premium-brand vehicles, MMI takes a fair amount of a driver’s attention to operate—though voice commands and steering-wheel controls can handle some of the load. MMI touch, which came with the test car’s navigation-package option, allows the driver to “write” a command across the surface of the control knob. Texting while driving is the deserving target of a concerted “don’t do it” campaign, but finger painting while driving still seems to be OK. A5s with navigation now have the “virtual cockpit” feature that allows drivers to call up the map view to fill the 12.3-inch instrument cluster while the speedometer and tachometer “dials” are minimized and shunted to the lower corners of the display. 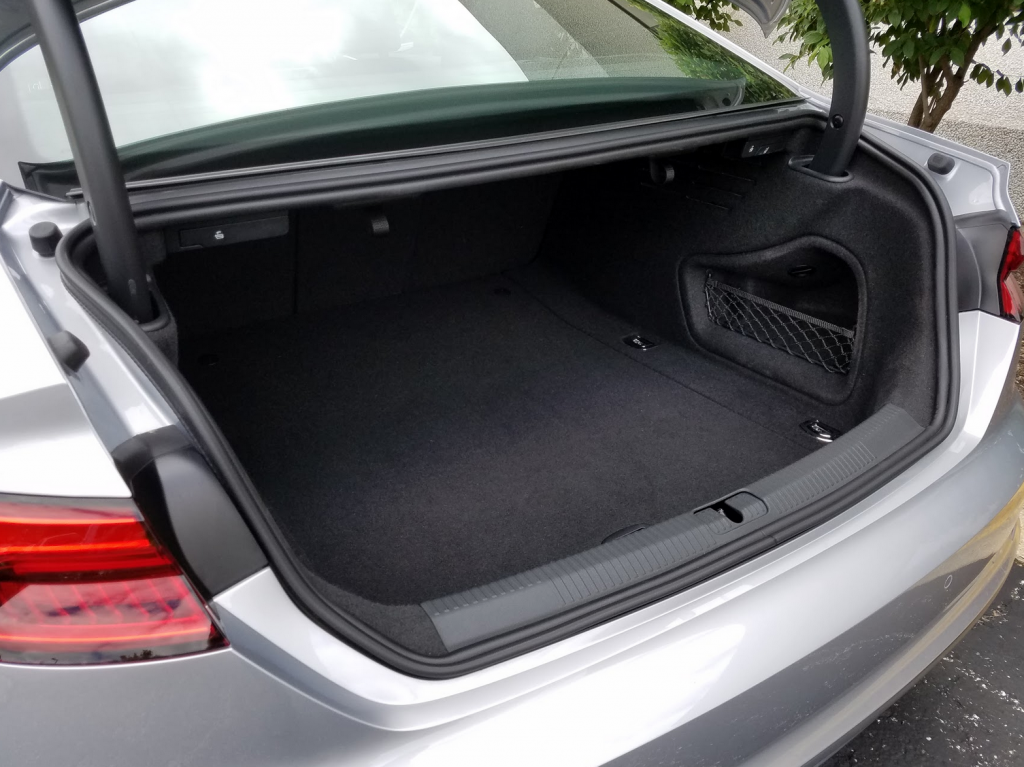 The A5 coupe’s 11.6 cubic feet of trunk space isn’t quite class-leading, but we appreciated the covered hinges, flat load floor, and upscale trim.

Standard connectivity and safety technologies include a USB music interface, smartphone interface with Apple CarPlay and Google Android Auto, rearview camera, and Audi pre sense basic occupant protection and pre sense city low-speed-collision mitigation. Home base for the 3-zone automatic climate controls is a panel in the center of the dash with separate temperature-selection dials and toggle switches to set functions. (Rear-seat passengers get their own climate controls mounted on the back of the center console.)

Leather upholstery is standard even in the base A5, called Premium. Soft-touch material covers the dash, as well as the doors and side panels all the way down to the armrests. Sections of textured aluminum extend across the instrument panel, console, and doors but can be swapped out for extra-cost wood inlays. It’s an undoubtedly nice interior, but somehow it falls a little short of the wow factor that Audi cabins had attained in recent years.

Seating for four is comfortable and supportive but access to the rear seats takes a little work—a task lightened slightly by power sliding front seats with push-button controls built into the upper bolsters. This 5’-10.5” reviewer was absolutely at the limit of headroom in the rear seat, and would have had merely tolerable legroom sitting behind someone his own size. Behind the wheel, though, he was able to find a comfortable driving position—and with a little extra headroom. (A standard panoramic sunroof takes up some overhead space.)

Interior storage in front utilizes door pockets, a glove box that surrenders some space to slots for an SD card and other digital inputs, a tray under the sliding center armrest, and two open cup holders. In back there’s a pull-down center armrest with a wide but shallow covered space and two fold-out cup holders. Sidewall pockets and net pouches on the backs of the front seats are included too. The rear seat has a 40/20/40 configuration with a center section that serves as a pass-through. Seats don’t fold totally flat but a fabric panel makes the transition from trunk without a gap. The trunk benefits from the uniform width of its flat floor. Net pouches on either side hold incidentals.

The A5 Premium is a nice-enough near-luxury coupe that starts at $42,800, though CG’s tester ran up to $52,950 delivered. Its price and package are competitive with similarly configured coupes like the BMW 430i AWD, Infiniti Q60 AWD, and Lexus RC 200t, so the A5 remains worthy of shoppers’ attention.

The A5 coupe is a fine grand-touring machine in the best European tradition; it cuts a striking, elegant profile, and its healthy 252-hp turbocharged 4-cylinder delivers lively performance.