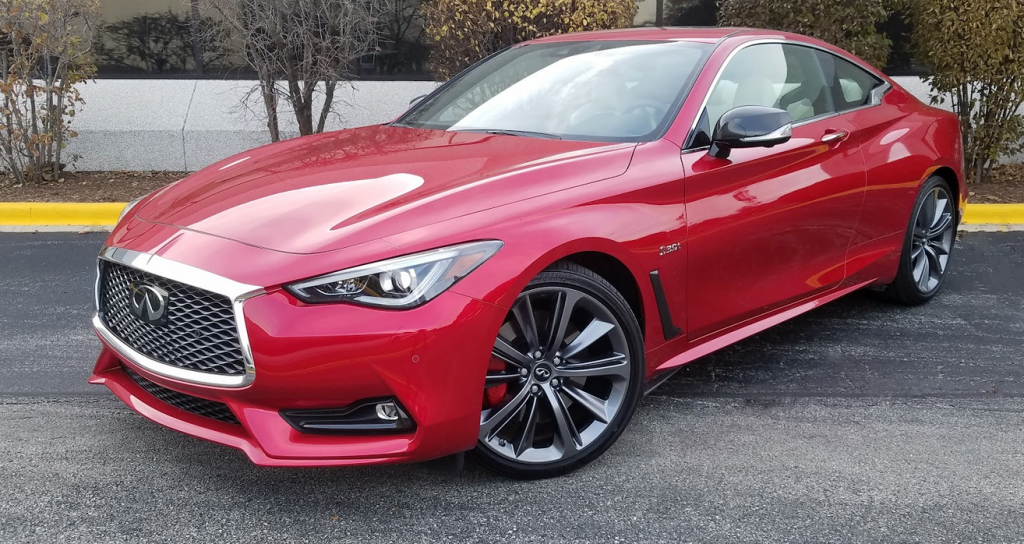 The good: Comfortable cabin; good space for a sporty coupe

The not so good: Mediocre observed fuel economy

Should the car be wiped from the face of the Earth as some foresee, eradicated by relentless waves of crossover SUVs and pickups, with the stragglers picked off later by automated transport modules for hire, would it be impossible to imagine coupes as the last to go?

More useful sedans dominate today’s suddenly vulnerable passenger-car field, but crossovers and crew-cab pickups match their 4-door convenience. Buyers of 4-door sedans can slip into light SUVs and not miss a beat, and the same can be said for the remaining wagons and hatchbacks. However, coupes—and, by extension, convertibles—have no direct rivals in the truck and SUV arenas. Plus, they frequently are the vessels into which automakers pour their hottest performance concoctions. Might there be enough enthusiast/admirers to keep these distinctive body styles in production after their sedan cousins expire unsung and abandoned? 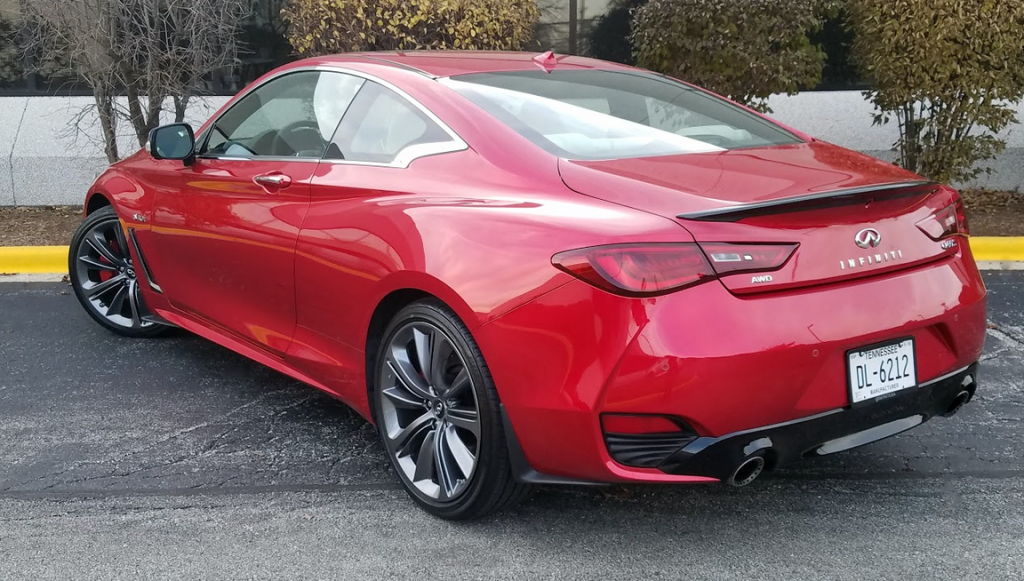 Such questions fill a guy’s head when he’s handed the fob to an Infiniti Q60 coupe. It’s not practical—not by a long shot—but it’s pretty and, as a Red Sport 400, fairly fun to drive. Some day that may be all that stands between cars like the Q60 and oblivion.

If you liked the 2017 Q60 then you’ll be fine with the ’18 model. Its biggest change is revised naming among the lower trim levels. That doesn’t touch the top, where the Red Sport 400 remains ensconced. Consumer Guide® sampled a Red Sport with all-wheel drive and a raft of options that drove the price from a base $54,000 to $65,795 with delivery; opting for rear-wheel drive saves $2000. For ’18, Red Sports get bigger 20-inch alloy wheels, but as in 2017, the AWD variant rolls on all-season run-flat tires of a single width while the rear-driver is shod with summer rubber that is wider in back than it is in front.

The Q60 cabin is roomy for a sporty coupe, and very nicely finished. There’s good front-row space for big and tall occupants; the rear seats are tricky to access and best suited for short and small passengers.

The Red Sport 400 isn’t the only Q60 with a twin-turbocharger 3.0-liter V6 in the engine bay, but it is the only one rated at 400 horsepower. Its 100 extra horses make for an impressively rapid car. With 350 lb-ft of torque that reaches its peak as soon as 1600 rpm, the Red Sport can make fast work of standing starts when the turbos kick in. A quick and determined downshift from the 7-speed automatic transmission enables effortless passing capability on the highway. Q60s come with a Drive Mode Selector with up to 336 possible settings for engine and chassis behavior. “Sport” and “Sport+” provide a freer flow of power and crisper shifts than in “Standard” mode. “Eco” tamps down power delivery, and is best suited to in-town driving. (“Snow” and a programmable “Personal” setting are the remaining modes.)

Alternating between Standard and Sport modes, this driver averaged 19.7 mpg from a 63-mile test stint that involved 62 percent city-type driving. EPA fuel-economy estimates for the AWD Red Sport are 19 mpg in the city, 26 mpg on the highway, and 21 combined.

The rotary knob located below the shifter is used primarily for navigation-system functions. The upper console monitor displays maps and guidance information, unless the rear-view or around-car camera functions are in play.

An electronically monitored Dynamic Digital Suspension is standard on Red Sports. Clicked into Standard, there’s a fine ride that’s firm but compliant enough to make the case that this Q60 is still a luxury sport coupe. Switching to the Sport modes alters damping characteristics and stiffens the ride somewhat. Road-surface irregularities make themselves felt a bit more. Thanks to the $2850 ProACTIVE Package option, the test car came with Infiniti’s second-generation “steer-by-wire” Direct Adaptive Steering that changes steering ratio and effort as conditions dictate. It does so without a mechanical connection between the steering wheel and the front wheels except in the event of a failure of the electronics. With this mix of chassis features, steering and handling are quite good. Red Sport and 3.0t Sport models have larger 4-wheel disc brakes than other Q60s, with 4-piston calipers in front and 2-piston calipers in back. These binders deliver prompt stopping power. 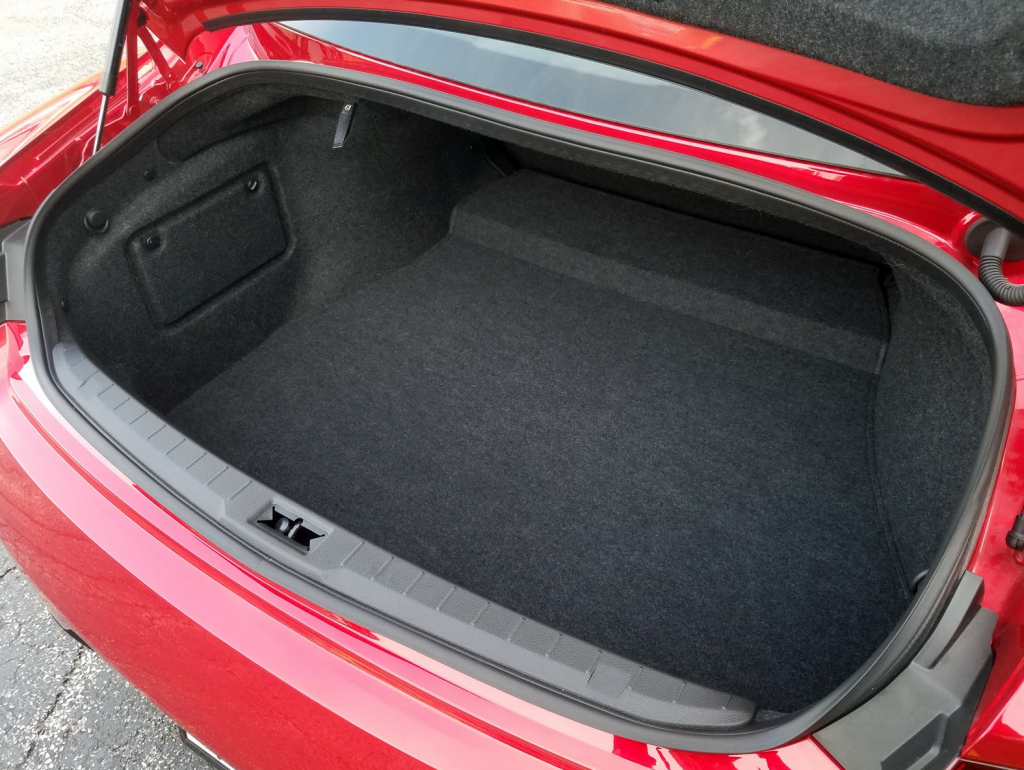 Trunk space is no more generous than you would expect to find in a rakish coupe. A high liftover can complicate the loading of heavier items.

The Red Sport 400 doesn’t go far out of its way to advertise that it is the hot rod of the Q60 clan. Aside from the wheels, the only other visual cues to its identity are a specific exhaust-tip design, red-painted brake calipers, and small red “S” badges on the front fenders and decklid. The test car took on more of a sports look with an option group that added a trunklid spoiler, mirror covers, fog-lamp finishers, and fender vents all made of carbon fiber.

Drivers face gauges and a configurable central information display that show up well. At the center of the dash are two screens. The upper one shows the map for the optional navigation system (map scale is adjusted by a dial on the center console); the lower one is for audio, climate, and other system displays. Unfortunately, these screens wash out when bathed in direct sunlight. Climate-system function buttons flank the right and left sides of the lower screen; right-side buttons are a little hard to see at a glance and reach by driver. Temperature is set by repetitive-push buttons that aren’t as convenient as twist knobs. The audio system has an on-off/volume knob, but station tuning requires a bunch of button tapping, too.

Interior trim and materials rise to luxury-brand expectations. Front-seat leg- and headroom aren’t bad for a coupe, and slender roof pillars make for an airy cabin with great vision for drivers. In back, anyone over 5’ 8” or so is going to find headroom a problem. A maximum of two passengers might enjoy acceptable legroom seated behind shorter passengers, but long rollbacks will consume rear space. The low roof complicates rear-seat entry and exit, even with front seats that power forward to assist this process. Interior storage for personal items is so-so. Glove-box volume is passable, and the modest space in the covered console box cedes some of its area to a block that holds auxiliary and USB inputs. Pairs of uncovered cup holders reside in the console and in the space between the rear seats. The doors incorporate long pockets. There is a shallow open bin between the rear seats, plus pouches on the backs of front seats. 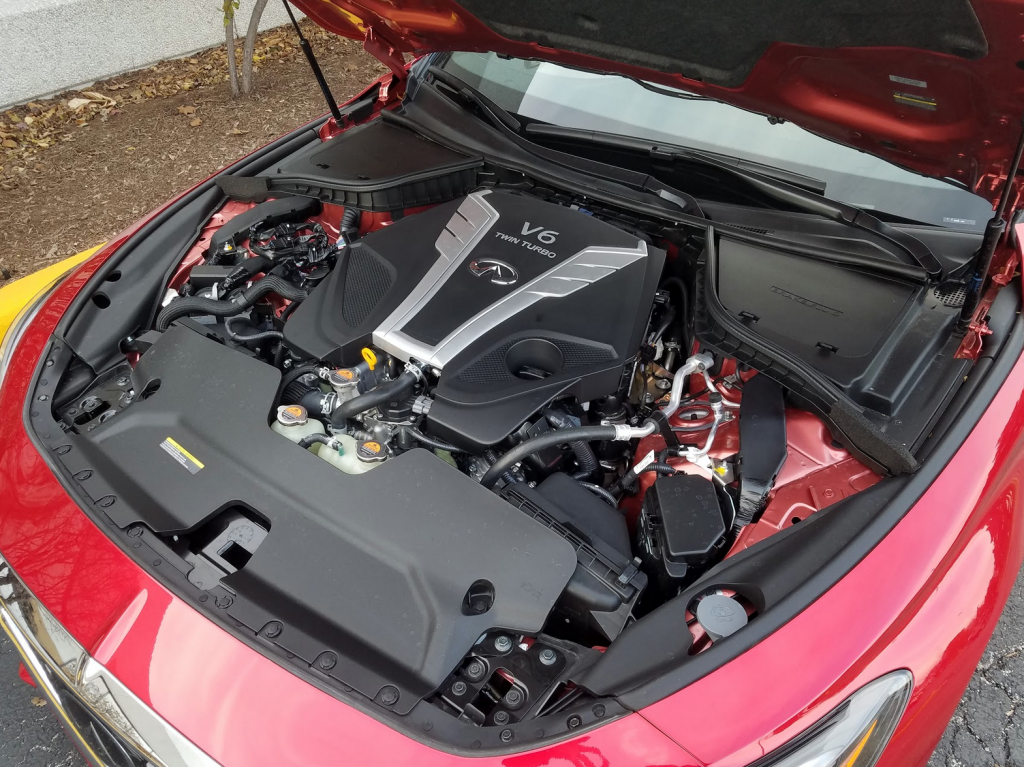 Loading the modestly sized trunk is hampered by a high liftover. Items are essentially dropped in from above—but the decklid opens fully vertical to make this a little easier. The undivided rear seat back folds flat with the slightly raised forward edge of the trunk to extend cargo space, but a bulkhead behind the seat restricts the opening.

No matter what the future may hold, right now the Q60 Red Sport 400 fits in a price and performance space between the V6 Lexus RC 350 F Sport and its V8 kinsman, the RC F. The Red Sport matches the engine output of the Audi TT RS, but the latter’s starting price is around what CG’s Q60 cost with copious options. If you haven’t yet given up on cars, this one is worthy of consideration.