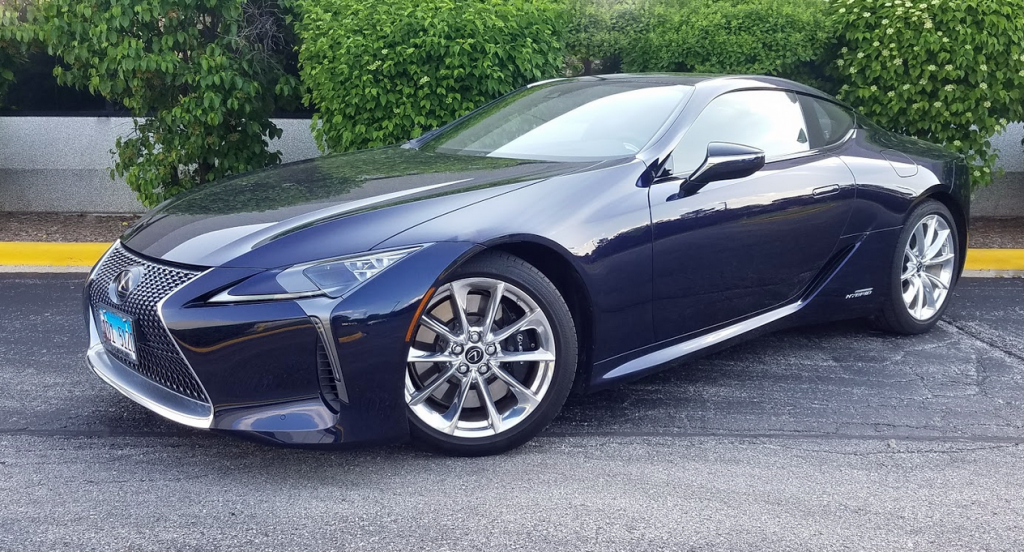 The not so good: Limited interior/cargo space, some finicky controls

There is a perception that people who can afford expensive cars, particularly sporty expensive cars, don’t have to worry about the cost of fuel, and therefore don’t sweat fuel economy. Apparently Lexus doesn’t buy into that notion. It released its low, lush, and speedy LC coupe for 2018 with a 471-horsepower V8—as the LC 500—and as an electric/gas-V6 hybrid LC 500h for folks who prefer better mpg numbers to ultimate mph. 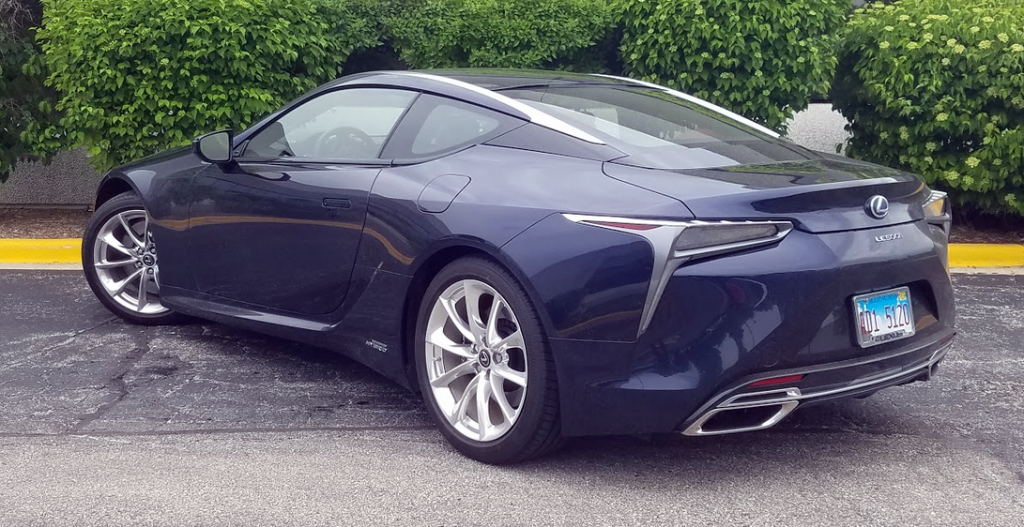 The Lexus LC 500h is every bit as head-turning as its decadently muscular, V8-powered LC 500 sibling, but is equipped with a more efficient–yet still invigorating–gasoline/electric hybrid powertrain.

With the variance in LC powerteams comes quite a difference in gas mileage. The 500h’s EPA ratings of 26 mpg in the city, 35 mpg on the highway, and 30 combined stack up as big gains from the respective 16/26/19 estimated for the nonelectrified V8 job. This driver averaged 27.34 premium-fueled mpg from a stint of 175 miles composed of 50 percent city-type driving. While he didn’t quite reach the EPA combined estimate, he did soundly whip the 18.5 mpg he got from CG’s test LC 500 in a marginally longer drive with 40 percent city operation.

The LC’s impeccably trimmed cabin really lives up to the car’s luxury-exotic aspirations. The seating position is low-slung and the cockpit is cozy, but spacious enough for plus-sized adults in the front seats. The rear-seat area is suitable only for toddlers or small-items storage. Many infotainment functions are accessed though a touchpad located to the right of the gear selector–a less-than-ideal arrangement, in our view.

The LC 500 manages its power through a 10-speed automatic transmission but the 500h uses what Lexus calls the “Multi Stage Hybrid System.” Working with the car’s two electric motors, it combines a continuously variable transmission (CVT) with a 4-speed automatic to provide better driving performance than CVTs alone customarily deliver, while raising the speeds at which the car can be driven in all-electric operation. Standard magnesium paddle shifters allow taking more active control of the transmission.

The LC 500h’s “Multi Stage Hybrid System” utilizes two electric motors and a 3.5-liter V6 that combine to produce a total of 354 peak horsepower. Though this output  isn’t in the realm of the 471-horsepower LC 500, the LC 500h is nonetheless seriously potent when piloted aggressively–and satisfyingly smooth and linear in normal driving.

The electric motors and 3.5-liter V6 put out a combined 354 peak horsepower. We’re probably shocking no one to say the hybrid lacks the visceral experience of getting going in an LC 500. Considering the power deficit and around 150 pounds of additional weight, it’s no surprise that Lexus pegs the 500h as slower from 0 to 60 mph. What may be a surprise is that the gap is as close as 0.3 of a second (4.7 versus 4.4). All LCs have standard selectable drive modes via a drumlike rotating control that projects out of the instrument cluster. “Sport S” mode enacts a more dynamic throttle response, and it does make the hybrid feel decidedly quicker. Unfortunately, even at its zestiest, the 500h doesn’t have the kind of muscular exhaust note that the 500 emits in the same circumstance. When the powerplant does switch to gas-only operation the transition is excellently smooth—you don’t know it happened. 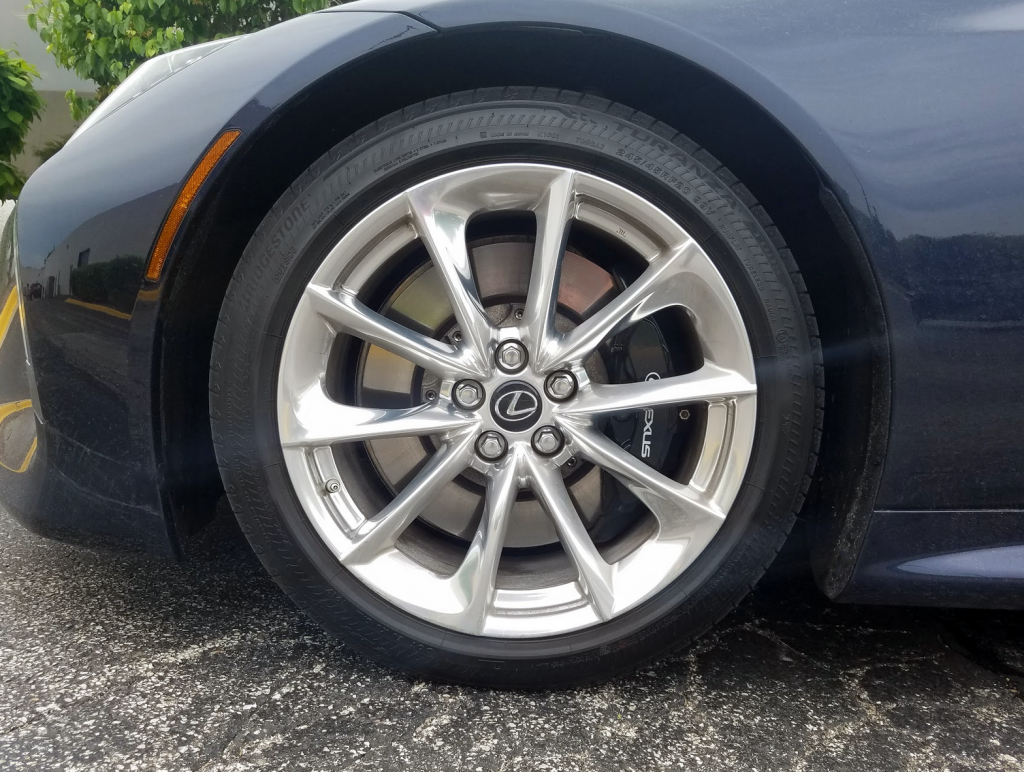 LCs of any stripe have a fully independent “Adaptive Variable Suspension” with double-joint multilink control arms. Twenty-inch alloy wheels with staggered-width run-flat performance tires are standard. Ride is firm but not punishing, even in the “Sport S+” mode with the most buttoned-down damping. The test car restrained cornering lean quite well, and steering was pleasingly responsive. Unfortunately, when it’s time to stop, this still is a hybrid with the somewhat vague brake action peculiar to the species.

In other ways, the two LCs are substantially the same. Luxury appointments are amply stocked in an expressively styled cabin.

Comfortable and supportive front seats rest under a low roof where headroom is limited—but still not nearly as limited as it is in back, even if someone could actually sit there. Indeed, the 500h has 0.5-inch less rear legroom than the impossibly tight V8 500. Over-the-shoulder vision is not great due to the severely sloped roof, but cabin quiet is commendable.

Soft, padded materials fully cover the doors and the sides of the rear section. The console is also plushly trimmed. Heated and ventilated leather front seats with 10-way adjustment are standard, but were upgraded to semi-aniline leather in the Touring Package option that was applied to the test car.

Virtual gauges are configurable with graphic displays that change with the selections of driving modes, and include an oil-temperature readout and g-force meter. CG’s car had the optional head-up display, which, like so many of its kind, became effectively invisible when viewed through polarized sunglasses. Audio, navigation, and other systems register on a 10.3-inch screen but control rests in console-mounted dial and a pad for pinch, swipe, or “written” actuation. Frankly, the pad can be too sensitive to use in a moving vehicle, and it takes some driver attention from, well, driving. The automatic dual-zone climate system standard in LCs has switches for all functions—including fan speed and temperature settings—that require repetitive presses.

Personal storage is limited. Two covered cup holders are scattered on the console. The glove box is small, as are the door pockets. The console box isn’t especially big, and it has to hold digital-device inputs. There are no personal-storage provisions in the back-seat area. The flat-floored trunk will carry a week’s groceries for two, or their weekend luggage, but not quite as much of it as an LC 500; the hybrid’s 4.7 cubic feet of trunk space represents an 0.7 cubic-foot reduction. Given the hatchlike lid, loading liftover is high.

The LC 500h rounds out its standard-equipment list with the likes of keyless entry and starting, leather-wrapped power tilt/telescoping steering wheel, heated memory mirrors, an audio system with HD radio and satellite radio, CD player, navigation, Bluetooth connectivity, and the Lexus Enform app suite. Safety technologies include forward-collision and pedestrian detection, radar cruise control, automatic high-beam headlamps, lane-departure warning, and lane-keeping assist. However, rear cross-traffic alert and blind-spot monitoring were on the test car only because they were in the extra-cost Convenience Package.

A dramatic profile and fine driving dynamics make either LC a worthy entry in the premium sporty/performance class (though the frontal styling has its detractors). Neither, however, is a bargain, especially the 500h that asks more to deliver a bit less in some areas.

In the market for a six-figure, luxury-exotic grand touring coupe with breathtaking styling, an indulgent cabin, and pulse-quickening performance… that is also capable of delivering fuel-economy numbers on par with a base-engine Honda Accord? Check out the lust-worthy–but oddly prudent–Lexus LC 500h.