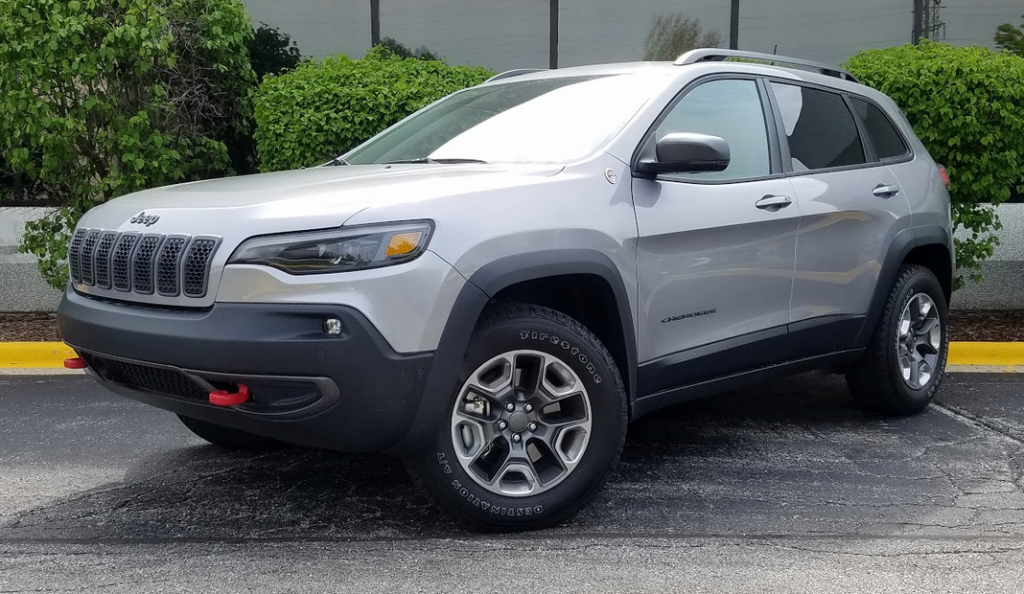 The not so good: Disappointing fuel economy, rear cargo area isn’t as spacious as many class competitors

Even if you’ve forgotten the Dodge Dart, Jeep can’t. That 2013-16 compact sedan, an Americanized version of the front-wheel-drive Alfa Romeo Giulietta, was—and is—the core platform for the Jeep Cherokee sport-utility vehicle. While the Dart recedes further into the past, the Cherokee keeps going strong with a significant updating for the 2019 model year. 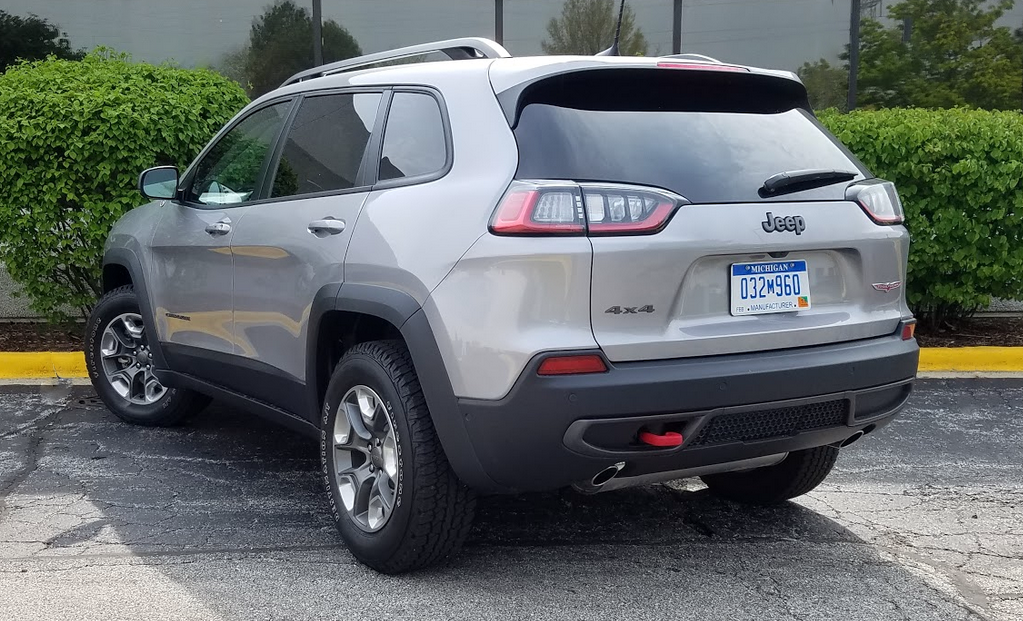 As before, the Trailhawk is the most off-road-focused model in the 2019 Cherokee lineup; it rides about an inch higher than other Cherokees and is outfitted with Jeep’s Active Drive II 4×4 system and Selec-Terrain traction control system.

The readily apparent aspect of the Cherokee’s freshening is its appearance. If you don’t remember the Dart, then you might have also forgotten that the styling of its Jeep half-sibling was a hot-button issue when it arrived as a 2014 model. In a First Spin report after the Cherokee media preview, Consumer Guide said, “Gone are most of the straight body lines and flat surfaces historically associated with Jeep vehicles. The new look has its detractors, though. Critics seem especially scornful of the slits that ride high on the front fascia and house turn signals and LED daytime running lights while projector-beam headlamps rest in pockets just above the bumper.” Many who didn’t care for the look predicted dire sales consequences.

The Trailhawk Elite package adds a number of upscale features, such as heated and ventilated front seats, a heated steering wheel, and premium leather upholstery.

Jeep managed to muddle through—fairly well it seems, judging by the steady stream of 2014-18 Cherokees we see every day. Still, finally, after five years, the vehicle is getting a more “conventional” look. There’s a taller, less-angled grille, plus standard LED headlights (styled to resemble those found on Jeep’s Compass and Grand Cherokee vehicles) that occupy the space formerly held by the turn-signal/DRL lenses. Out back, the tailgate and bumper cover are new, and the taillights have been reconfigured.

Jeep engineers were able to open up a bit more storage room by widening the rear cargo area. Cargo capacity is 25.8 cubic feet behind the rear seats, and 54.9 cu. ft. with the rear seats folded. A hands-free power liftgate is a newly available feature for 2019; it’s included in the Trailhawk Elite package.

By adopting lighter-weight materials, such as aluminum for the hood and plastic composite for the tailgate, some 150 pounds have been pared from the Cherokee. An expanded engine lineup welcomes a turbocharged 2.0-liter four, and added standard features include Apple CarPlay/Android Auto and a capless fuel filler. Further, the availability of key safety and convenience technology brings the Cherokee in line with leading class competitors. 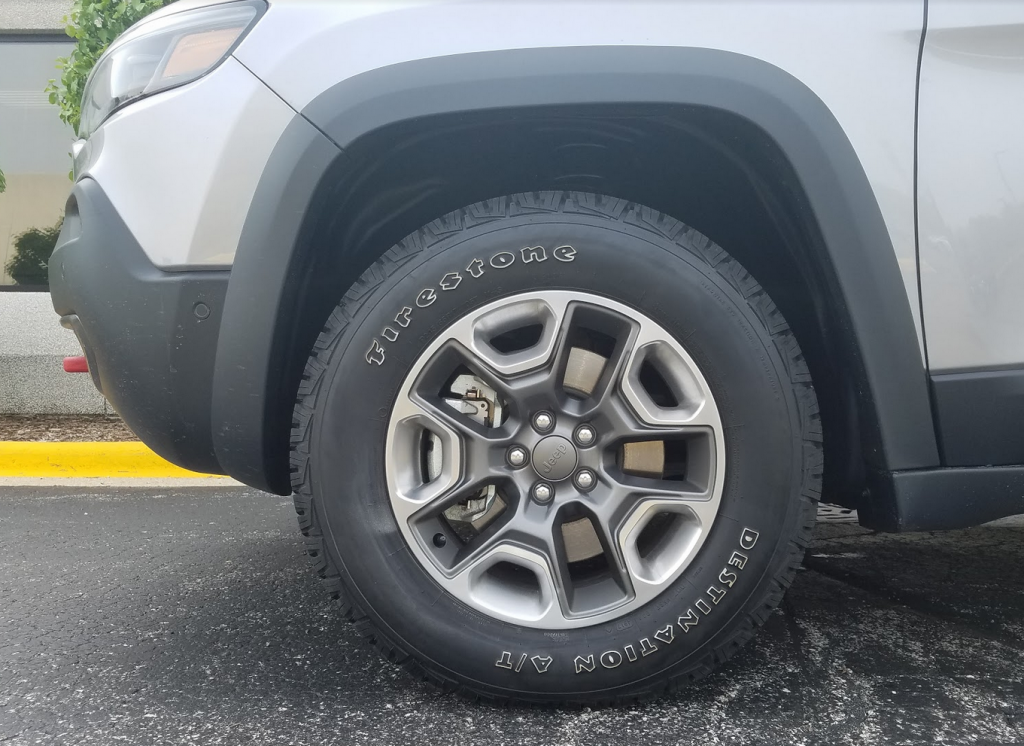 CG editors drove a 2019 Trailhawk, the most off-road-ready Cherokee. Solely a 4-wheel-drive vehicle (all other Cherokees come in a choice of front-wheel or 4×4 motivation), the Trailhawk starts at $33,320, which makes it $300 cheaper than a Limited 4×4. However, the test truck was considered an Elite, an “option model” born from a $2995 package. Thus equipped, the Trailhawk jumps a step in the model/price hierarchy, but still is $1460 cheaper than the line-topping Overland with 4-wheel drive. With additional options and delivery, CG’s tester limboed under the $40,000 threshold by a mere $50.

The Trailhawk earns its “Trail Rated” merit badge thanks to features like a ride height that’s one inch higher than other Cherokees; an off-road suspension; skid plates to protect the underside of key mechanical components; in-bumper tow hooks; specific lower fascias front and rear that maximize approach and departure angles; and Selec-Terrain traction management with Selec-Speed crawl control and “Rock” mode (in addition to the “Auto,” “Snow,” “Sport,” and “Sand/Mud” settings found on other Cherokee 4x4s). With Selec-Speed activated at a rate from one to five mph, a driver can creep steadily uphill or downhill with no accelerator inputs. Other distinct Trailhawk standards are a 3.2-liter V6 engine; 17-inch polished and painted aluminum wheels; all-terrain tires; matte-black hood decal; full-size spare tire; Uconnect 4 infotainment system with an 8.4-inch touchscreen, integrated voice control, Bluetooth connectivity, and off-road pages; and deep-channel “all-season” floor mats. 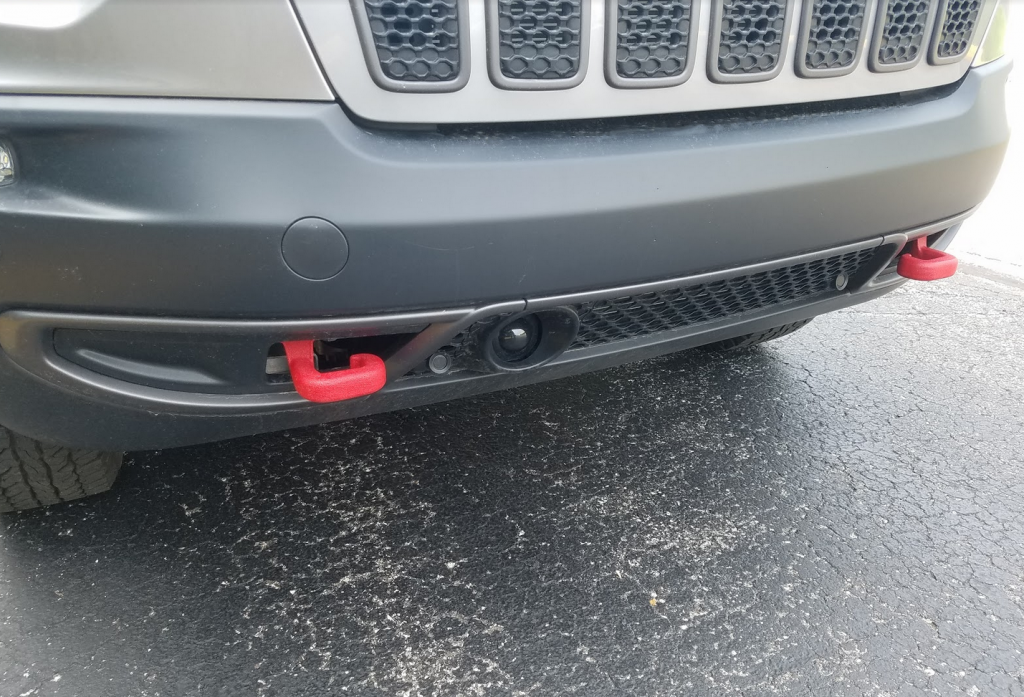 In place of the V6, the test vehicle came with the new 2.0-liter turbo engine, a $500 option. (Trailhawk is not available with Cherokee’s remaining powerplant, a 2.4-liter four.) At 270 horsepower, the turbo job is just one pony shy of the herd in the V6, but the former has much more maximum torque—295 lb-ft versus 239 lb-ft. After a moment of initial turbo lag, the engine finds itself and displays a pleasing eagerness—though with a noisy undercurrent. All Cherokees come with a 9-speed automatic transmission that’s fairly smooth in normal operation, but a little slow on the draw when strong acceleration calls for kickdown. (This reviewer ran the test truck in Auto mode. The available Sport mode stays in a given gear longer, allowing a bit more speed to build.)

All Cherokee engines come with a gas-conserving standard stop/start feature that’s quite subtle in operation. EPA fuel-economy estimates for the turbo 2.0-liter Trailhawk are 20 mpg in city driving, 26 mpg on the highway, and 22 combined—numbers that are slightly better than the 18/24/22 estimates for a V6-powered Cherokee Trailhawk, but a bit underwhelming compared to most class competitors. In our testing, we averaged 18.8 mpg with 75 percent city-style driving.

In everyday use on pavement the Trailhawk is easy to handle, and it rides well. Jeep claims to have added some width to the cargo area, but otherwise the interior has the look and feel of Cherokees since 2014. The test vehicle had abundant soft-touch material around the cabin, convenient and intuitive operation of audio and climate systems, and good overall room for four adults. (An additional grown-up might fit in the middle of the rear seat if the ride isn’t too long.) There’s nice cargo space for a compact SUV, with open cubbies at the rear corners and some small-item containment around the spare tire. Rear 60/40 seats fold practically flat to form a bigger load floor when needed. What personal-item storage spaces lack in capacity they make up for in number.

Blind-spot and rear cross-traffic monitoring is standard. However, the Technology Group option added additional electronic safety features to the test vehicle, including lane-departure warning and forward collision warning and mitigation.

All in all, the Cherokee Trailhawk’s features make for a small SUV that shoppers shouldn’t forget to investigate—particularly if they plan to utilize the rugged off-road hardware to tackle some trails.

The Jeep Cherokee Trailhawk benefits from a styling facelift and several newly available features for 2019.