The great: Hatchback utility, interior materials, value for the money

Check it out the entire Kia lineup

A few years back, Kia decided to step out of its “budget priced” box and take on the likes of Lexus with the K900 luxury sedan. Although it was a good car and a good value – and even a Consumer Guide® Best Buy – it never caught on, presumably because buyers balked at paying $50,000 (and up to $67,000 from there) for a Kia.

Kia takes on the sport-sedan set with potent turbo power and available all-wheel-drive traction in a value-priced, midsize 4-door hatchback.

So now the company has decided to take on BMW – which would seem to be ill advised, and for the same reason. But this time, Kia may have something.

That “something” is the Stinger. As a premium-midsize 4-door offered with a choice of rear-wheel drive or all-wheel drive (optional on any model for $2200) and either a 255-horsepower 2.0-liter turbocharged 4-cylinder engine or 365-horsepower 3.3-liter turbo V6, the Stinger debuts as a true sports sedan that’s priced well below the level of most class rivals.

However, the “sport sedan” tag is not altogether accurate; the Stinger is actually a 4-door hatchback, which ends up adding quite a bit to its utility quotient. And though its starting price of $32,800 in rear-drive/4-cylinder form is attractive, it’s really the V6 versions that better merit the “sport” label, and those start at a slightly less enticing $39,250. However, the base V6 comes standard with many features most rivals charge extra for – such as leather upholstery, heated front seats, 12-way power driver seat with 4-way lumbar adjustment, 8-way power front passenger seat with 2-way lumbar adjustment, keyless access and starting, front and rear obstacle detection, and power hatch lid – making that figure come out to look like a relative bargain.

But of course, it wouldn’t be if the car didn’t live up to its hype. Which, as it turns out, is not so much of a concern. 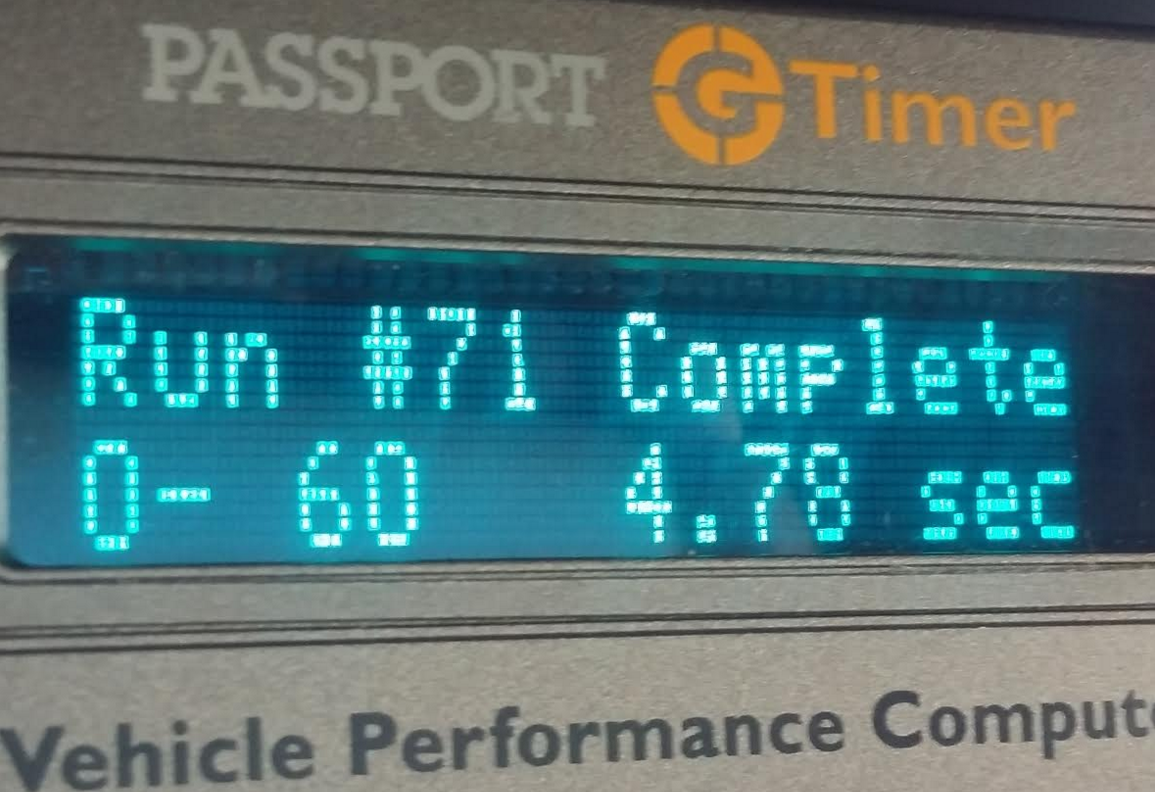 It’s not just about the time; it’s also about how it gets there. The turbo V6 suffered very little turbo lag, providing a good jump off the line and a linear power build.

Let’s start with the most obvious question mark. At least in V6/AWD form, the Stinger is decidedly spunky: 0-60 times averaged about 4.8 seconds, not class-leading but certainly quick. Most notable was that there was very little turbo lag under a full-throttle launch from a stop, power came on in a linear fashion, and the 8-speed automatic transmission provided prompt kickdowns when the throttle was stabbed at speed, making for great passing response. Furthermore – and nearly as important from a sensory standpoint – the exhaust makes an enticingly menacing growl when you dip into the throttle, which might partially account for our rather disappointing 17.8-mpg average, though that included half city driving and half-a-dozen 0-60 bursts. Steering and handling are appropriately sporty without greatly sacrificing ride quality, which is firm but not harsh – though it gets stiffer in Sport mode. Brakes are impressively strong and responsive. Altogether, a great drive. 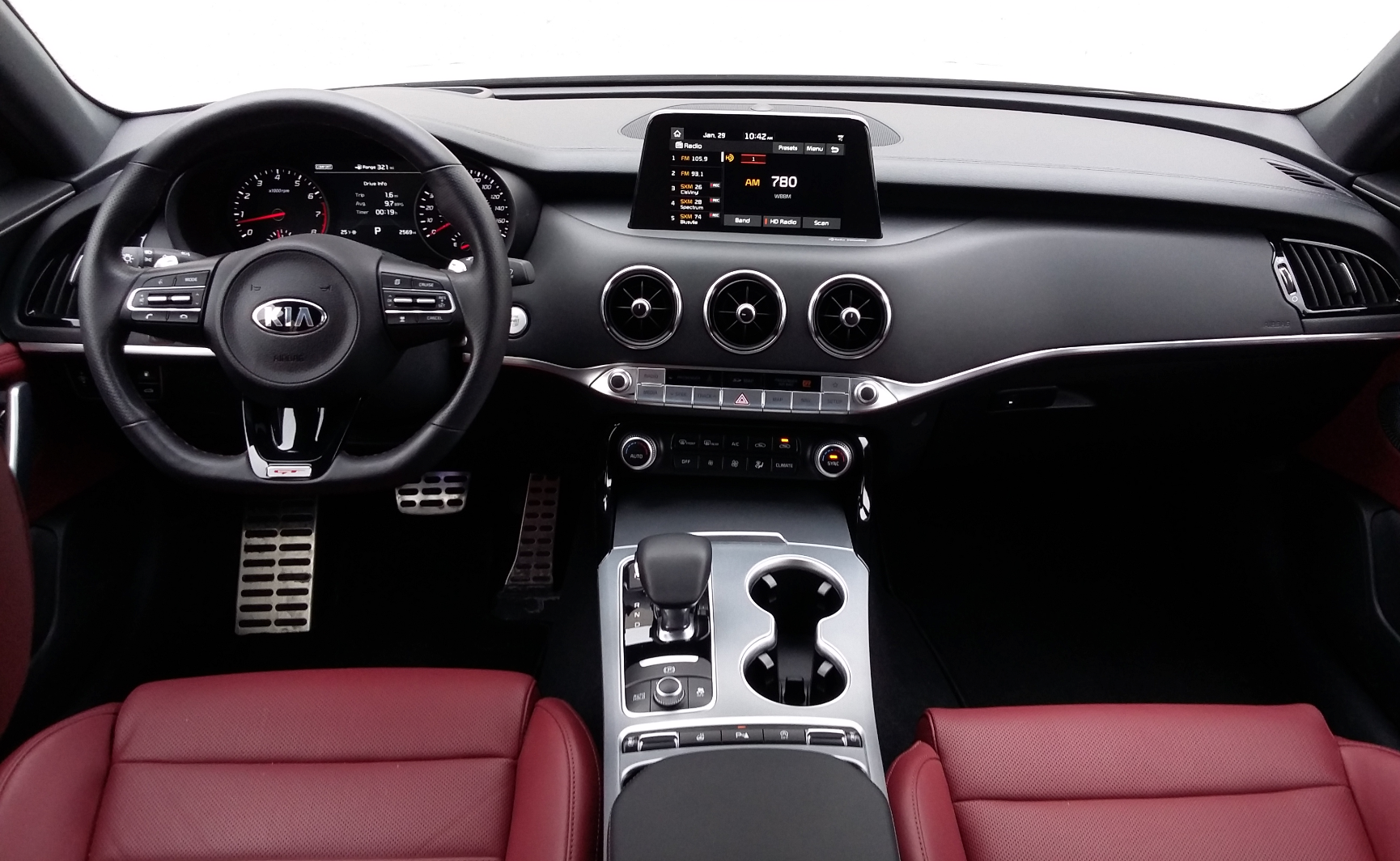 The nicely trimmed interior boasts many sporty touches and a fine control layout.

Things were also up to snuff inside. Our tester wore red upholstery and door panels that set off a hard-padded black interior accented with lots of neat-looking, satin-silver trim, all combining for an upscale yet sporty look. We particularly appreciated the door handles, with a vertical one at the leading edge and another in the armrest, the former making it easier to close, the latter easier to control the door when opening. Less impressive is interior storage space, as both the glovebox and console box are small, with the most notable element being a covered forward console bin housing Aux, 12-volt, and two USB plugs. Visibility is good to the front, but fades to fair at the sides and downright poor to the rear corners, though the standard rearview camera and rear obstacle detection help when backing.

Audio controls include volume and tuning knobs along with several physical buttons and an easy-to-reach touchscreen. The climate system uses a rotary temperature knob (good) with repetitive-step fan and mode controls (less good).

Good and bad … and good. We really appreciated the forward and mid door handles, didn’t care much for the toggle-type shifter. But below the shifter — to the left of the round knob — is the Auto Hold button, which came in handy at long stoplights and train crossings.

Something we didn’t much care for was the console gearshift lever – or at least, the logic behind it. Being of the “toggle type,” you push the lever forward for Reverse, back for Drive, and hit a button to engage Park. Woe be the newbie who thinks they put it in Park after pushing the lever forward (as is conventional wisdom), only to find out it’s in Reverse.

But also on the console was something we really liked. Press the Auto Hold button after coming to a stop, and you can take your foot off the brake without the car rolling; just hit the gas again to go. We found it handy for long stoplights and train crossings.

Although there’s plenty of adult headroom and legroom on offer up front, the rear seat is less accommodating. The sloping roofline leaves headroom sufficient only for those up to about 5’10, and that’s with a low-set cushion that can mean a knees-up posture for even average-size folks. Furthermore, legroom nearly disappears if the front seat is moved all the way back (to the point an adult won’t fit), and the low cushion, equally low stance, and smallish door opening hinder egress a bit. 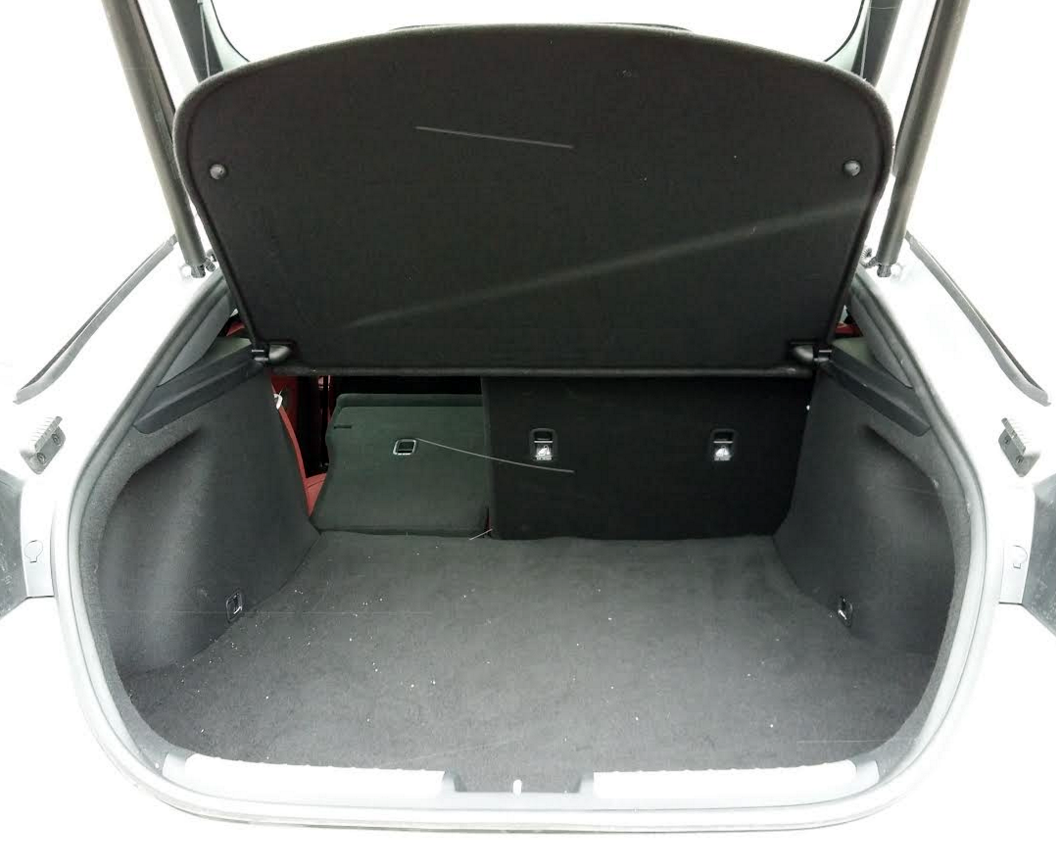 The cargo hold is wide at the rear, and the folded rear seat backs rest level with the load floor, which offers some hidden storage underneath. The cargo cover (shown in place) can be removed to create a tall load area no sedan can match.

But what the Stinger sacrifices in rear-seat room it makes up for in cargo versatility. Thank the hatchback design for creating a larger hold than is available in any sedan, or at least one that can carry taller items. Furthermore, the folded rear seat backs rest level with the cargo floor (unusual in sedans, which usually suffer a several-inch “step”), there’s some hidden storage under the floor, and the hatch lid was powered, a nice touch.

Note, however, that our test car was a loaded, top-line GT2 AWD V6 that bottom-lined at $52,300, giving us … yep … another $50,000 Kia. Hmm. It’ll be interesting to see if this little voyage outside Kia’s box is any more successful than the first.

If you like snappy throttle response and strong, linear acceleration, you could make yourself happy with a V6 Kia Stinger GT. The 365-horsepower twin-turbo mill doesn’t dawdle when your right foot comes down. You don’t just merge into flowing highway traffic, you leap into it, ready to set the pace for those around you if need be — which might surprise some of your fellow motorists who see the Kia badge on the back. Plus, the Stinger GT makes a pretty nice sound while doing this.

Things that make the Stinger likeable aren’t restricted to the powertrain. This driver was won over by its crisp handling and great brakes, the liberal use of plush and attractive soft-touch materials — the test car’s red seats and door centers added panache — and the easily managed audio and climate controls. Just like your favorite pizza place, the standard seat and steering-wheel heaters deliver quick and hot. As a guy who’s complained more than once of being snubbed by “hands-free” trunklids and liftgates in other vehicles, I’m happy to report that the Stinger worked just fine in this regard. I just wish it hadn’t tried to open up into my chin while I was scraping snow and ice off the back window.

Part of the Stinger’s appeal is its low, racy look. You may or may not like the somewhat low seating position — I noticed that I was looking up at certain vehicles around me in traffic. There’s also a penalty paid in rear-seat headroom, and a slitlike view through the dramatically sloped rear window. Also, rear legroom isn’t all that great for a midsize car with a 114.4-inch wheelbase. Finally, after a trip of 223.9 miles composed of 42 percent city-type driving, I averaged 18.15 mpg, which isn’t even up to the EPA’s 19-mpg city estimate, let alone its 21-mpg city/highway-combined figure.

If absolute practicality is your goal, Kia has other cars for that. For high levels of fun and features, there’s the Stinger.

Top-line versions top $50,000, but the Kia Stinger has the looks, performance, and features to take on more-established makes at the sporty end of the premium midsize class.