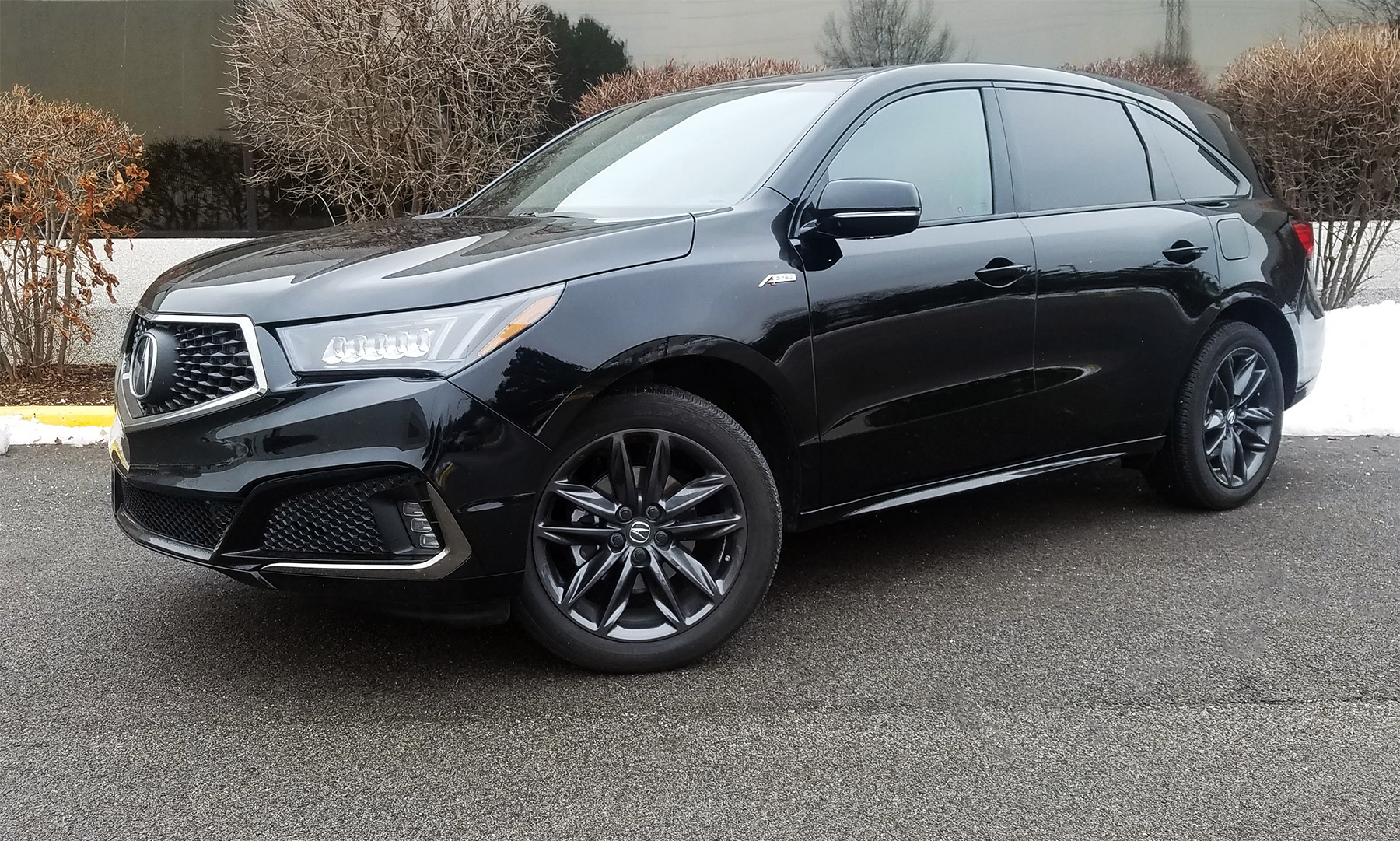 The good: Good level of standard features; competitive pricing for the class

The not so good: Not quite as much cargo room as some class rivals; some complicated infotainment controls

Good things tend to linger around Acura’s premium-midsize crossover SUV. The MDX has been on the market since 2001, and it has been a consistent strong seller for the brand. According to industry-watcher Automotive News, it was Acura’s second-best-selling product line in 2019 with 52,019 buyers. The vehicle’s current platform dates back to 2014, with a significant freshening in ’17; in that entire time, it has been a Consumer Guide “Best Buy” pick because of its sporty driving character, elevated level of cabin refinement, fine selection of technology features, and sound fuel economy for its class. 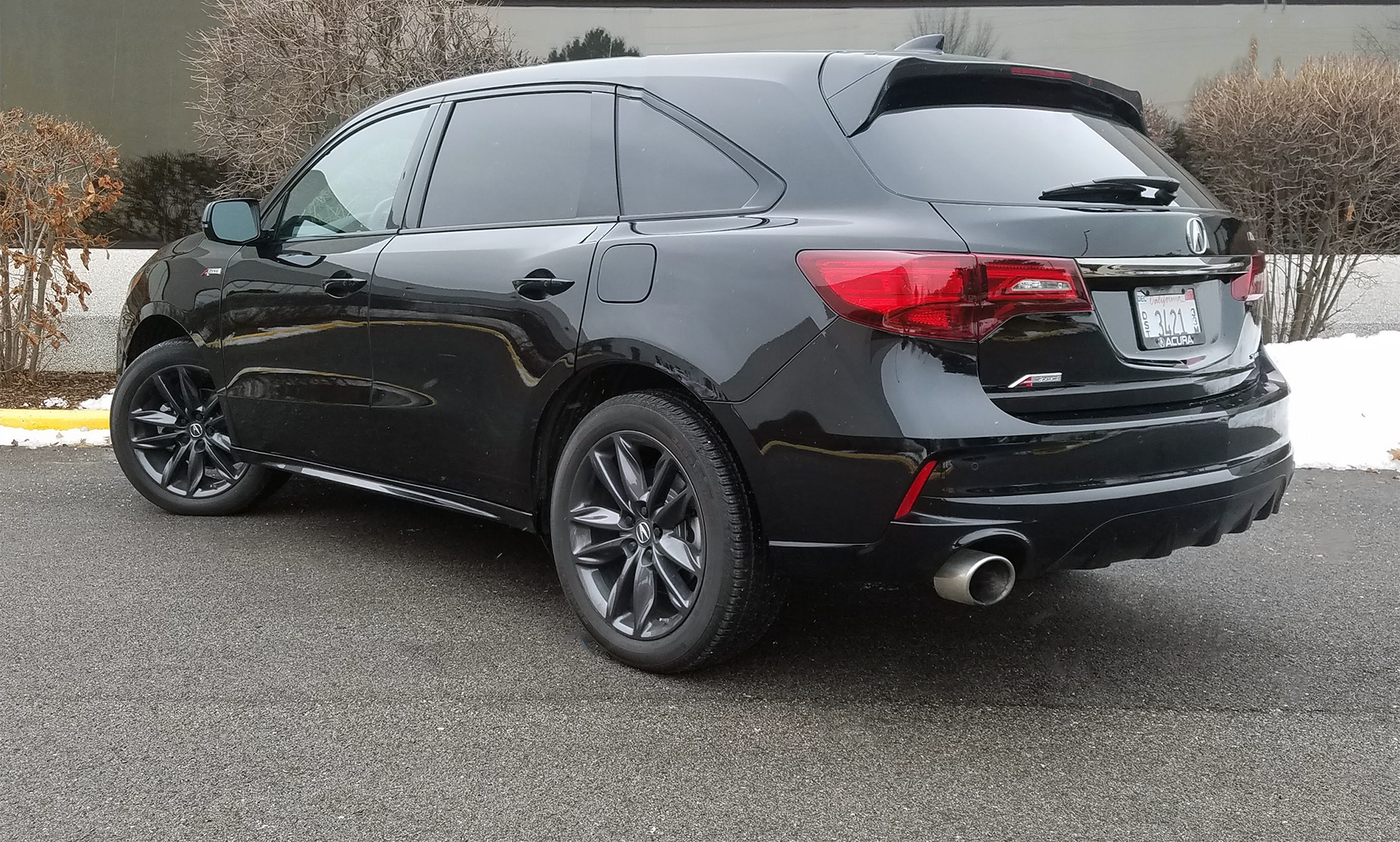 The MDX as it’s currently configured is pretty consistent, too. Changes are incremental. Indeed, nothing of note has been done to the 2020 version in the wake of a mild refresh for ’19 that included the introduction of an A-Spec trim level. We missed the A-Spec in its debut season—our 2019 MDX tester was a Sport Hybrid—but CG is catching up on it with this review.

Typical for Acura, the MDX A-Spec essentially comes complete, with no additional equipment packages to consider, though there are quite a few dealer-installed accessories on offer. Unlike some MDXs that have a choice of driveline, the A-Spec rolls on nothing but the brand’s Super Handling All-Wheel Drive (SH-AWD). The only cost-raiser on the tested vehicle was its Majestic Black Pearl paint, one of three available premium colors that come for an additional $400. (Three other colors are considered no-cost “standard” hues.) With delivery, CG’s sample truck listed for $56,425.

Previous MDXs we’ve tested had a stately look thanks to lighter colors and woodgrain trim accents, but the A-Spec aims for a sportier ambiance via red seats with Alcantara upholstery inserts, red contrast stitching, and sport pedals. 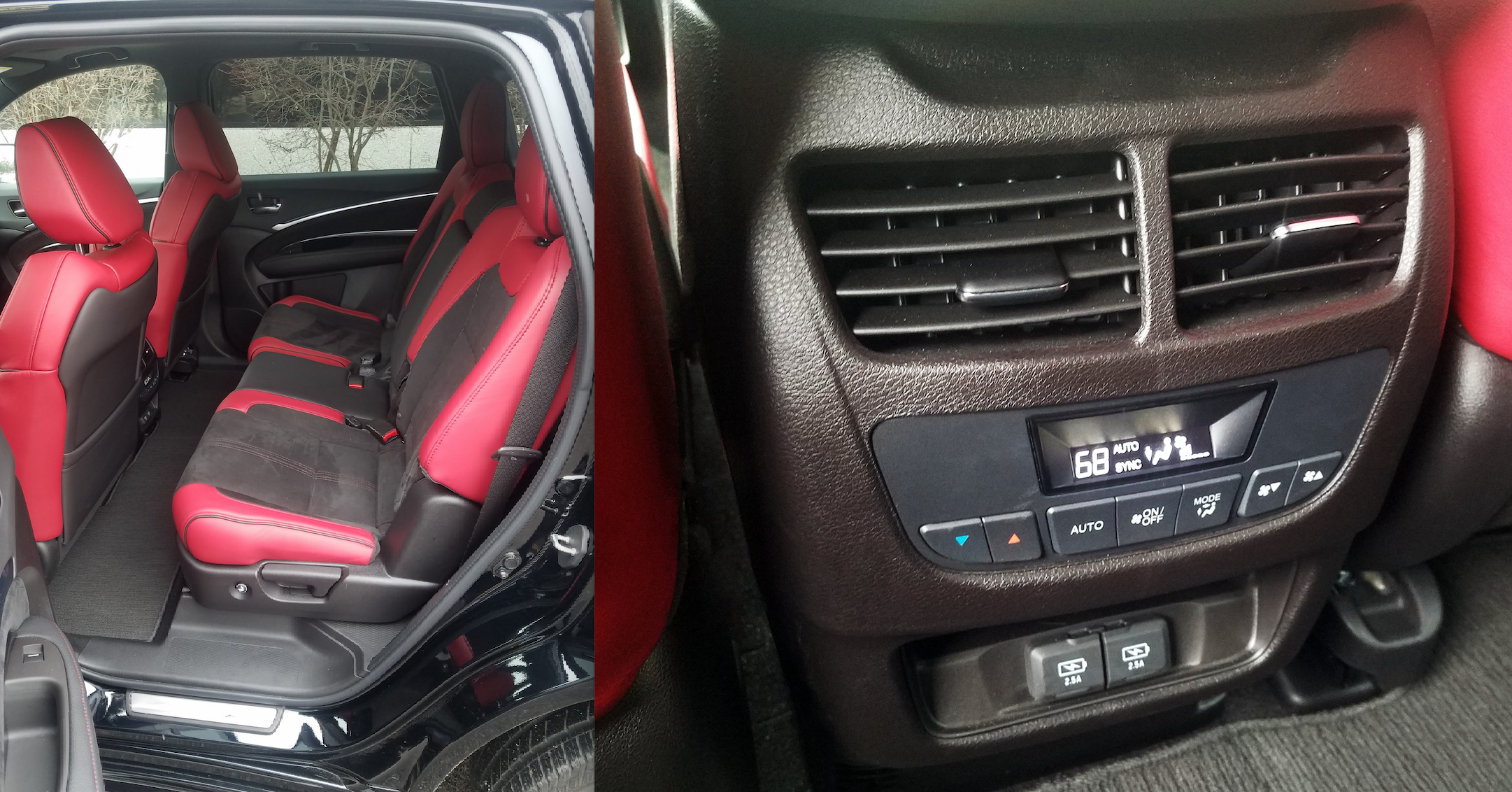 Second-row seat space is generous, and the flat floor makes it easier to fit in a center-seat passenger. The second row gets its own climate controls, as well as dual USB charging ports.

While the rest of the automotive world busies itself with expanding into any crevice of the crossover market space that appears to be uncovered, Acura is getting by somehow with just the compact 2-row RDX and the 3-row MDX with room for up to seven passengers. There’s good front-row comfort, and the A-Spec sport seats are designed to keep occupants in place during brisk driving. The second row has just enough room to keep folks of average builds happy—with some opportunity to wedge in a middle passenger. (Some MDX models have individual captain’s chairs that limit capacity to six people.) Unfortunately, the third row is cramped.

The A-Spec interior imparts a nice ambiance, with lots of soft-touch material and metallic trim to brighten the surroundings. In the test vehicle, the leather portions of the front and middle seats were in a red that put some spice in the recipe. Passengers’ personal-item storage needs are addressed by a good-size glove box, and a console with some covered space and some open space  for lots of flexibility. Exposed cup holders are set in the console, too. Second-row denizens are served by pouches on the backs of the front seats and cup holders in the flip-up center armrest. In addition, there are pockets in all four doors, and sidewall cup holders for the use of those seated in the third row. The interior is quiet, and offers drivers good sightlines.

There’s 15.0 cubic feet of cargo space behind the MDX’s third-row seats–decent, but not great for the class, and the load floor is a bit high. The capacity grows to 38.4 cu. ft. with the third-row seats folded, and 68.4 with the second row folded.

It can be a little complicated to use the central control dial for the infotainment system—the menu selector is on the dash below the display screen—so more touchy-feely types (this reviewer included) will be glad to know that the screen also responds to direct touch. Climate-system operation is a mix of on-screen taps and physical buttons for things like defrosters and temperature selection (via repetitive toggle switches). A button-activated transmission selector  on the console reminds the driver that this is a Honda product. Following a little period of acclimation, it will begin to seem natural to use. Steering-wheel shifter paddles are included for more-determined drivers.

Limited cargo space remains when the third-row seats are up. Retract them, though, and the area gets pretty big. Middle-row seats are split 60/40, and they fold quite flat to reveal the maximum available load space. Bumper height strikes us as kind of high, which makes for higher than usual liftover. There is an abundant bin under the load floor for secure storage, and an open cubby to the left to hold incidentals.

The A-Spec doesn’t get anything exclusive under the hood–it’s powered by the same 290-hp 3.5-liter V6 as other non-hybrid MDXs. These 20-inch Shark Gray alloy wheels are unique to the A-Spec, however.

Without any overt performance tuning—this is no BMW M- or Mercedes-Benz AMG-type vehicle—the MDX still manages to have a surprisingly sporty on-road character. It drives and handles exceptionally well, with a nicely composed ride, even with the A-Spec’s 20s for rolling stock. The 290-horsepower V6 has nice power smoothly parsed through the 9-speed autobox. The EPA says this combination should generate 19 mpg in the city, 25 on the highway, and 21 combined. When this driver put 152 miles on the test truck in a 50/50 mix of city- and highway-type driving, he averaged 20.6 mpg.

The MDX A-Spec adds a little flair to a vehicle line that’s been pretty comfortable going without much of it, yet it doesn’t really alter its basic nature. You could call that consistency. 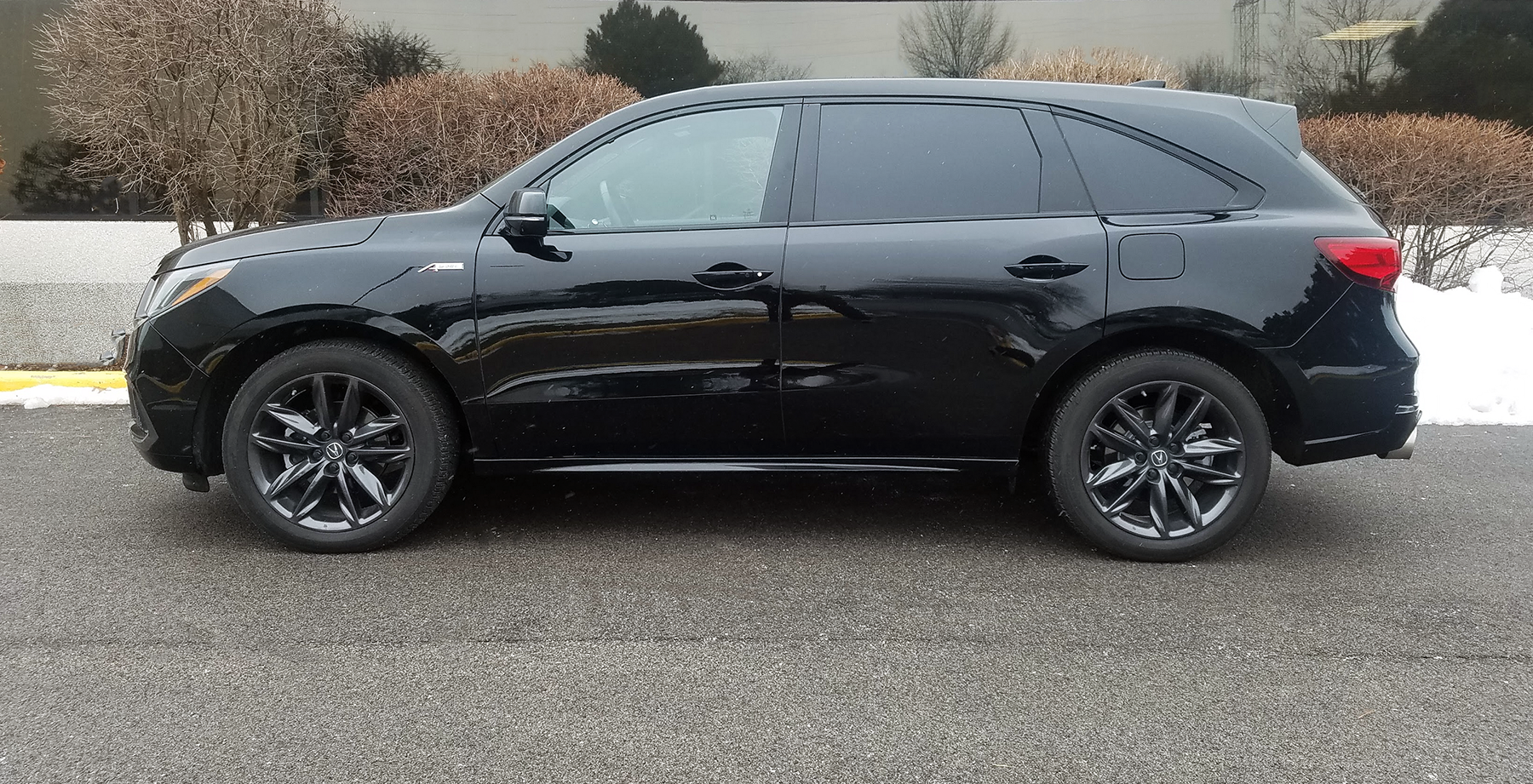 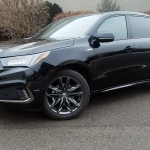 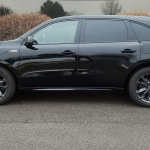 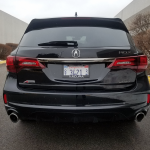 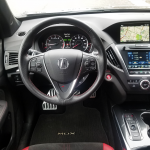 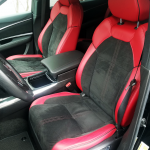 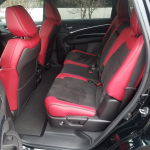 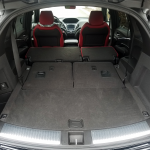 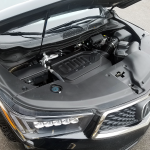 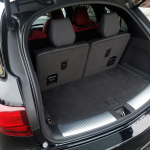 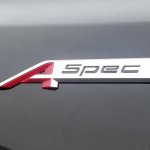 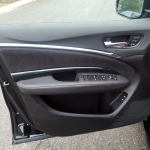 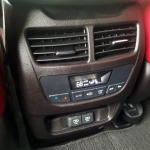