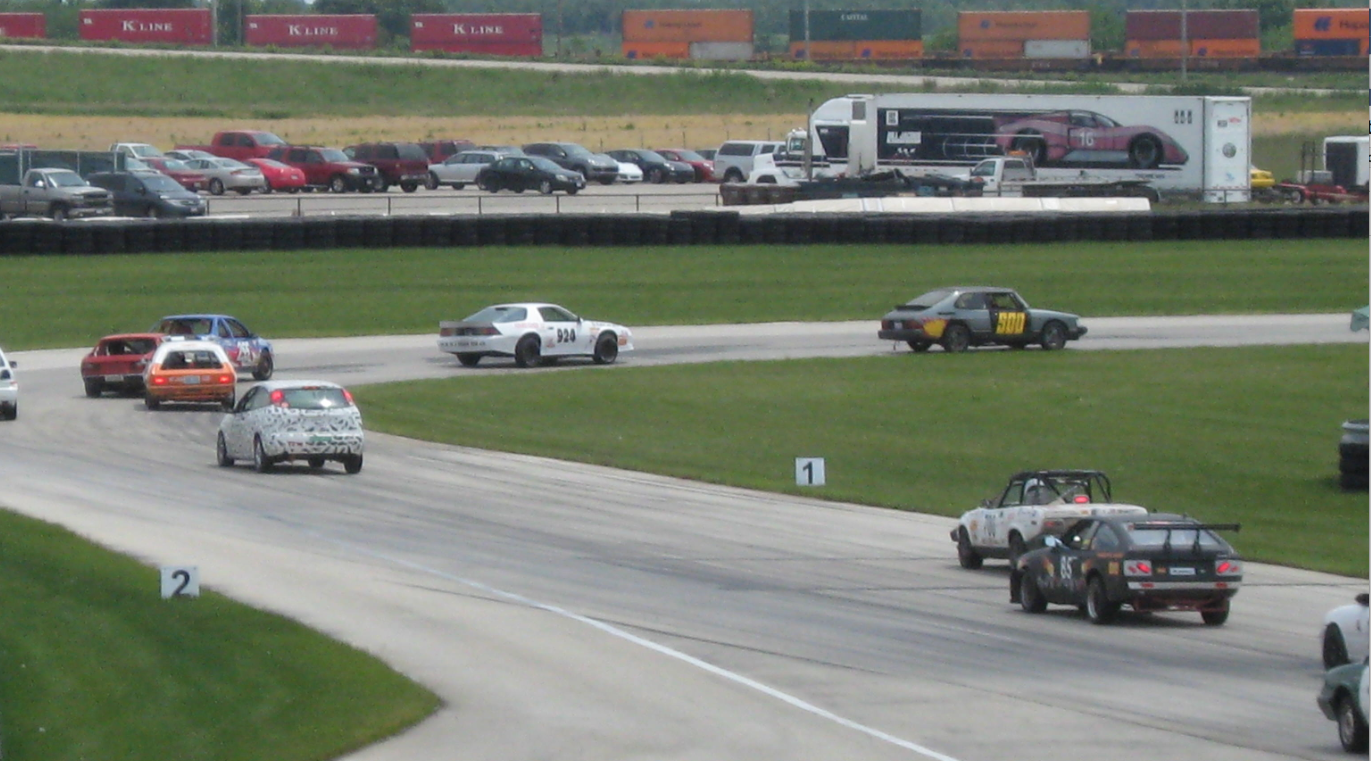 LeMons racers pile into the first turn. Note the variety of cars pictured and also their decidedly low-rent beginnings.

In an age in which the heroes of auto racing are often backed by big money and equally big egos, LeMons racers are backed by pocket change and a flair for the absurd.

By the way, don’t in any way confuse “LeMons” (as in lemons) with “Le Mans” (as in the famed road race in France), though that’s of course the play on words the organizers intended. Whereas teams spend millions of dollars to field a Le Mans car, teams are supposed to spend no more than $500 to field a LeMons car.

Yep; you read that right: $500. The rules state that you can deduct any parts sold off a donor car to arrive at that figure (such as interior pieces and windows you don’t need), and in time-honored racing tradition, there’s probably some cheating in this regard. But for the most part, the cars start out as bona fide beaters.

Now, that $500 doesn’t include safety equipment, which the rules regard as tires, brakes, and the mandatory roll cage and fire extinguisher. Nor does it include the encouraged “cosmetics,” which can run the gamut from sloppy paint schemes to outrageous costumes. And yes, we mean for the cars.

Begun in 2006, the whole point of the 24 Hours of LeMons was to bring back low-cost, grass-roots racing to a sport that had grown entirely too expensive. And serious. So while there’s certainly a sense of competitiveness on the track, the idea is just to have fun, and the real fan favorites are the teams that come up with the most creative cars.

A recent event at the Autobahn Country Club racetrack in Joliet, Illinois, bore this out.

It was a two-day event, but the cars ran for only a few hours each day; there’s one 24-hour race in the annual schedule, but all the others are shorter. And while some of the cars didn’t have much more than a brush-applied paint job, others were almost comical.

My personal favorite was a windowless old Volvo wagon decked out like a school bus, complete with a screaming yellow paint job, red lights on the roof, a stop sign that swung out from the left side on every right-hand turn, and Raggedy Ann dolls suspended from the shoulder belts. And these guys weren’t just lapping the track; they were racing. Another was the “Flying Pig” pink Mustang replete with huge rear wings and a trashcan for a snout.

What was perhaps most interesting was the variety of cars in competition. They ranged from hopelessly outclassed econoboxes (including a Chevy Chevette and Mercury Bobcat) and workaday sedans (there were a couple of Oldsmobile Cieras) to the more expected Camaros, Mustangs, and BMWs. One prize goes to the car that completes the most laps, but just as coveted is the “Index of Effluency” award, which goes to the team that overcame the greatest odds. The overall victor was a mid-’80s Camaro (oddly, the first GM F-Body to ever take a win), while the Index of Effluency winner was the aforementioned Mercury Bobcat.

Although the event is mostly held for the entertainment of the racers, it’s also a lot of fun to watch. 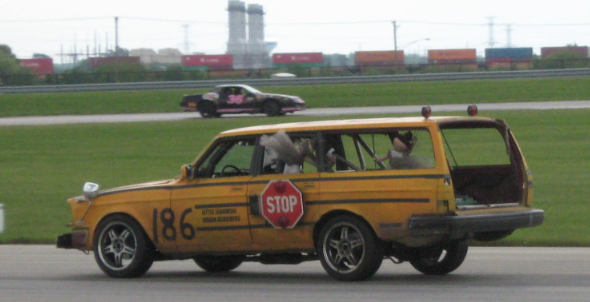 An old Volvo wagon decked out like a school bus—complete with “students”—was my personal favorite. 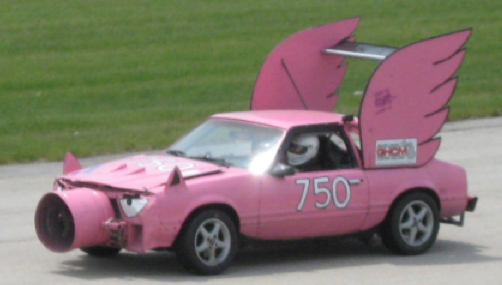 Another stand-out “customization” effort was this Mustang-based flying pig.

The eventual winner (#36 Camaro) drafts a Volkswagen decked out like a postal van—complete with packages on the roof. 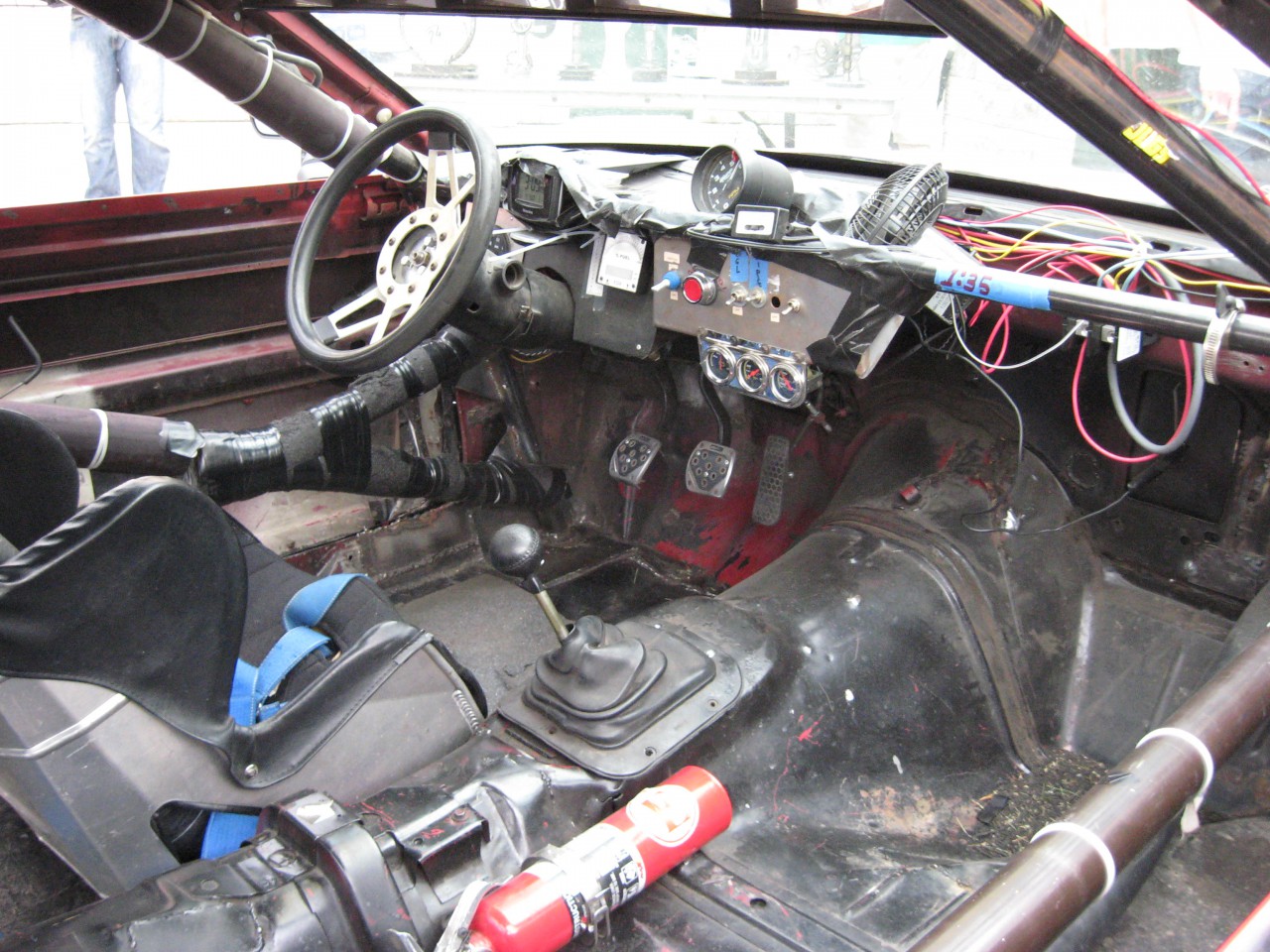 The interior of the winning Camaro shows the typical driving environment, with all nonessentials removed to save weight.