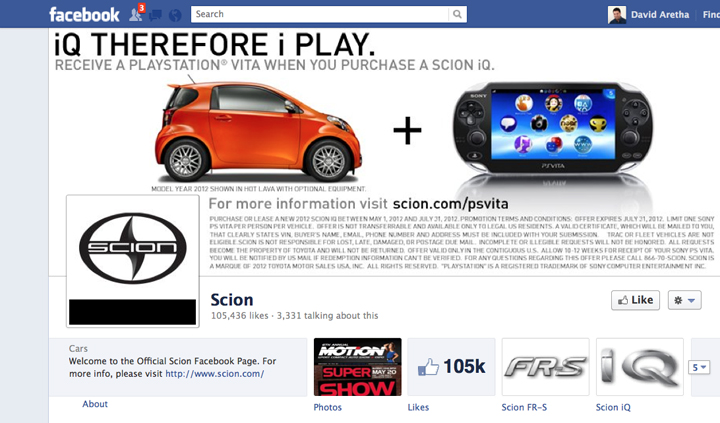 I think you’ll agree that most individuals and small businesses would be very happy to have 100,000 Facebook fans and 13,000 Twitter followers. (As a side note, we certainly would be and we’d encourage you to tell your friends to like us on Facebook and follow us @cgautomotive.) However, when you’re a car company trying to target the most connected generation in history, suddenly those numbers are, to put it charitably, less than stellar.

As you could probably tell by the title, I’m referring to Toyota’s Scion brand. To put those social media contacts in perspective, Buick has more than 400,000 Facebook fans and 15,000 Twitter followers. Volvo Cars US lists about 200,000 fans and 63,000 followers. The Ford Mustang garners nearly 43,000 followers and more than 4,000,000 fans. That is not a typo. A single vehicle from one company has more Facebook fans than the entire population of Oklahoma.

The first Scion vehicles went on sale in California in 2003. From its outset, Scion’s parent company targeted its vehicles and marketing toward younger buyers who might not ordinarily consider a Toyota. The initial effort was largely successful as the cars were fuel efficient, hip looking, and very easy to customize with both dealer-approved and aftermarket parts.

Young shoppers flocked to the Scion section of Toyota dealerships. The average age of a buyer when the brand launched was 35; the same figure for the rest of the industry was significantly greater than 50. According to the trade publication Automotive News, sales peaked at nearly 175,000 in 2006, with the majority of volume coming from the sporty tC.

The Fall of Scion

Then the bottom fell out. Actually the bottom fell, started digging, and is more than half way to Australia at this point. The recession of 2008 hit Scion particularly hard, and recovery has been much slower than for other automakers. Further, the Japanese earthquake of 2011 didn’t help, especially since all Scions originate in Toyota’s home country. Automotive News reported less than 50,000 Scions found homes in calendar 2011.

What happened? It’s hard to know for certain, but I have a few ideas.

1) Attrition. Scion was designed to serve as a “gateway” to the Toyota brand, and there’s no doubt many owners moved into Toyota- and Lexus-branded products. At the other end, there has not been a similar influx of new customers to replace them.

2) Lack of interest in cars as a whole. Scion officials have essentially admitted this. The automobile doesn’t ignite the same passion in this generation as it did in the past.

3) You ain’t getting any younger. Data from Automotive News and research firm R.L. Polk suggests that the average tC coupe buyer was 43.5 years old in 2007 and 47 in 2011. Scion remains a young brand, but its buyers are getting older while the rest of the industry is skewing younger.

4) Trying to be tuned in gets you tuned out. You have some people who will always say that “kids are dumb.” That couldn’t be further from the truth. They’re more savvy than ever, not to mention cynical. Try to be hip, and you’ll get smoked out faster than Ken Gushi can chew through a set of tires.

Scion might have caught on to the last point, as much of its new advertising is a lot more mainstream than when the brand launched. Rather than dark, edgy CGI-laden affairs, the brand is showing off its new 2013 FR-S coupe carving up a scenic mountain road.

Meanwhile, Scion’s bread-and-butter xB is languishing, as is the smaller xD. The current-generation tC has been a disappointment owing to a lack of innovation and refinement when it was redesigned for the 2011 model year. According to data provided by Toyota, sales of all three of these cars are down between 1.4 and 11.3 percent in the first four months of 2012. Meanwhile, all Toyota-branded passenger cars except the Corolla have seen their sales increase dramatically during the same time period. We’re talking boosts of 30 to 70 percent. Scion sales as a whole are actually up slightly, and that’s because of the iQ, which did not exist for nearly all of 2011.

The brand needs the new-for-2013 FR-S to take off in a big way. This new sporty car is Toyota’s first rear-wheel-drive vehicle in nearly two decades. Scion Vice President Jack Hollis says he expects up to 20,000 annual sales. That may seem modest, but I find it a bit optimistic considering how poorly cars such as the Hyundai Genesis Coupe and Mazda MX-5 Miata are performing. Subaru, a brand whose fortunes continue to improve every year, is projecting just 5,000 to 7,000 annual sales in North America for its BRZ, which shares much of its design with the FR-S.

Of course, I sincerely hope to be dining on these words with a side of barbecue sauce and that the FR-S will become the thing that will bring Scion out of the doldrums.