When Worlds Collide: Mitt Romney and the Auto Bailout 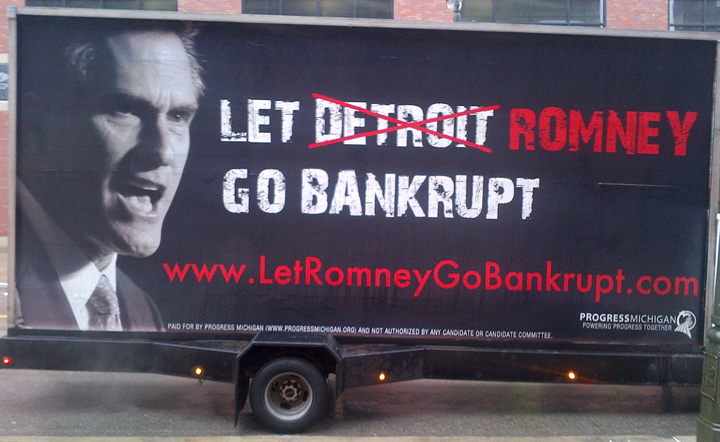 We all know politicians will say anything, even if it requires standing logic on its head, and Mitt Romney is a fine politician. For example, in a May 7, 2012, interview with a Cleveland TV station, the presumptive Republican presidential nominee took credit for something he had railed against in the first place: the government-ordered, taxpayer-funded 2009 bailout of Chrysler Group and the then General Motors Corporation. At the same time, however, Mr. Romney stated that he also favored the very action taken by the Obama Administration to save the two automakers. So, another case of that now-familiar stance on the Iraq War: “I was against it before I was for it.”

Mitt Romney and the Auto Bailout

Being a minor Trekker (please, not “Trekkie”), I’m somehow reminded of the original-series episode “Mirror, Mirror,” in which members of the Starship Enterprise crew exchange places with evil twins from a parallel universe. As Mr. Romney has long been criticized for flip-flopping on various issues, perhaps there are actually two Mitts, each of whom appears as circumstances require but are never seen at the same time. Rather like Clark Kent and Superman, only less heroic. But I digress . . . .

As reported by Christina Rogers in trade weekly Automotive News, the former Massachusetts governor said on TV that he “pushed the idea of a managed bankruptcy, and finally when that was done, and help was given, the [auto] companies got back on their feet. So, I’ll take a lot of credit for the fact that this industry has come back.” Rogers then goes on to note that this is “the same guy who, in 2008, penned a caustically worded opinion piece in The New York Times to warn us that if the government intervened to rescue GM and Chrysler, ‘you can kiss the American automotive industry goodbye.’’’

George Romney and the AMC Marlin

Needless to say, industry supporters—not to mention all sorts of Democrats—have jumped on Mr. Romney’s, er, revisionist remarks. As Rogers reported, the United Auto Workers union, “a big Obama supporter, issued a statement [the next day] pointing out that the bailouts helped GM and Chrysler return to profitability and create jobs. ‘None of this would have happened if Romney had been the one making decisions,’ the UAW said.” Ms. Rogers also quotes U.S. Senator Debbie Stabenow (D-MI) as saying, “I was in the middle of the fight to save our American auto industry jobs and I can assure you, Mitt Romney was of no help when we needed it.”

Full disclosure: I’m a lifelong liberal Democrat and proud of it. But I’ve also been mightily disappointed with Barack Obama in several ways, not least for being way too Pee-wee Herman at a time when we needed another FDR or at least a JFK. But what bothers me most is how hostile and gridlocked American politics has become in the 21st century. Some days it seems to me like the country is engaged in a new Civil War, and that does not bode well for the future we all must live in.

I wonder what Mitt’s father would make of his son’s position(s) on the auto bailout and other issues. Even as a car-crazy kid, I knew that George Romney had saved fledgling American Motors from an early grave and I admired him for that. And though I was too young to care about politics when he was elected governor of Michigan in 1962, I somehow had the impression that he was less a politician and more just a good guy concerned with doing the “right” thing, even if it rankled fellow Republicans. I think it says a lot about the man that after losing a presidential bid to Richard Nixon in 1968, he accepted appointment as Nixon’s secretary of Housing and Urban Development in 1969-73, which, as the record indicates, was not an easy job.

Though you might not think so, I honestly admire Mitt Romney for many things he did as governor of Massachusetts. Unfortunately, he seems intent on “refutiating” that past in favor of some alternate persona that he hopes will land him in the White House. George Romney had the courage to take on Detroit’s “gas-guzzling dinosaurs” of the late 1950s and then entrenched political interests. What a pity the son doesn’t seem so brave.