The Last Three Coupes of the Cigar-Wielding American Dealmakers

I don’t actually smoke cigars. As I am to high-end brown liquor, I am immune to the charms of fine tobacco. I find myself sadly confessing that in a blind “smoke test,” I would be unable to discern between an expensive Cohiba and a rolled-up grocery sack.

Still, I recognize that there are moments for cigars and that there were guys who helped make them cool. Clint Eastwood certainly did a fine job of honoring the cigar in (insert Sergio Leone film here). And while no trendsetter, Peter Falk’s Columbo was certainly cool in his own, rumpled, unassuming way.

But when I mentally combine cigars with cars, I think about a lost breed of American men. Guys who sold land using a map stretched out on a car’s hood. Guys who got deals done, owned ski boats they rarely used, and smelled like Lectric Shave. These guys wore jackets without ties, collected every copy of Playboy going back to August 1971, and, most importantly, drove big, fast coupes.

These guys were never our dads, but distant uncles. Guys who appeared at every third family gathering and gave generously in the form of birthday, Confirmation, and graduation gift envelopes. And much like these likable cigar-chomping dealmakers, the big American coupe has vanished.

I present here the last three coupes worthy of the cigar-wielding dealmaker. Only one, the Cadillac Eldorado, made it into the 21st century. The other two cars got close, but production of both ended in 1998 as more-practical, new-age luxury shoppers opted for the convenience of rear doors. The last American luxury coupes:

1992-2002 Cadillac Eldorado
Somewhere between the excess of padded vinyl roofs and the surgical starkness of Cadillac’s present “Art & Science” design meme existed a period of under-appreciated sporty bling. With available chrome wheels, the Eldorado looked both expensive and fast, and just a wee tacky—in a good way. Packing a 270-horsepower “Northstar” V8, these last-of-the-breed Eldorados made quick work of the space between the office and wherever cocktail hour was being observed that day. Upping the ante was the ETC (Eldorado Touring Coupe), which picked up 25 additional horsepower and a sport-tuned suspension.

The Eldorado was a mechanical kissing cousin of the Cadillac Seville, which would soldier on until 2004, when it was redesigned and renamed STS.

1995-1999 Buick Riviera
After an emasculating 1986 downsizing that left the Riviera with a body less than 190 inches long (shorter than a 2013 Honda Accord), Buick’s flagship bounced back for 1995, stretching almost 20 inches longer and picking up an available supercharger along the way. At just 240 horsepower in its most burly state, the blown V6 may not have seemed all that potent on paper, but with all sorts of torque on tap, the supercharged big Buick could reach 60 mph from a stop in under 7 seconds.

The last Riviera shared its basic architecture with the Oldsmobile Aurora, a car that would outlive the Riv by five model years. 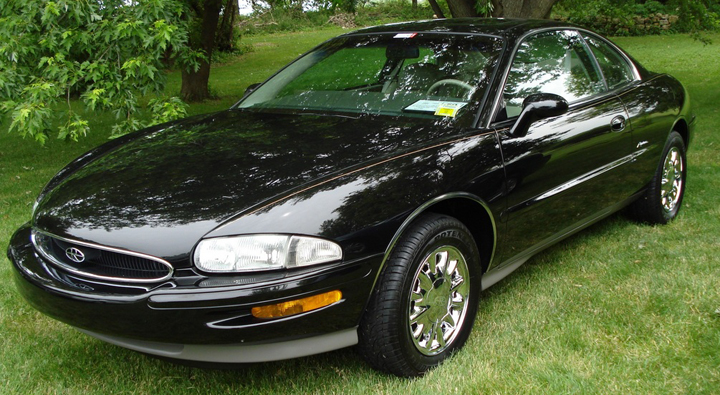 1993-1998 Lincoln Mark VIII
Unlike the Eldorado and Riviera, the Mark VIII was rear drive, which gave it, perhaps, a stronger claim to American big-coupe tradition. Like the Eldorado, the Mark sported a V8 heart. But Lincoln’s own marketers failed the Mark in branding the engine. While most period shoppers were familiar with Cadillac’s Northstar engines, few had heard of Lincoln’s “Intech” mill. A shame, as the 32-valve, 290-horsepower motor moved this big Lincoln coupe with authority.

The Mark VIII rode on a heavily modified version of the architecture that underpinned the Ford Thunderbird and Mercury Cougar. No other car shared Mark’s platform.